Her strength and durability both are superhuman. There isn’t a lot to benchmark her with, but we’ll assume “Class 20”. 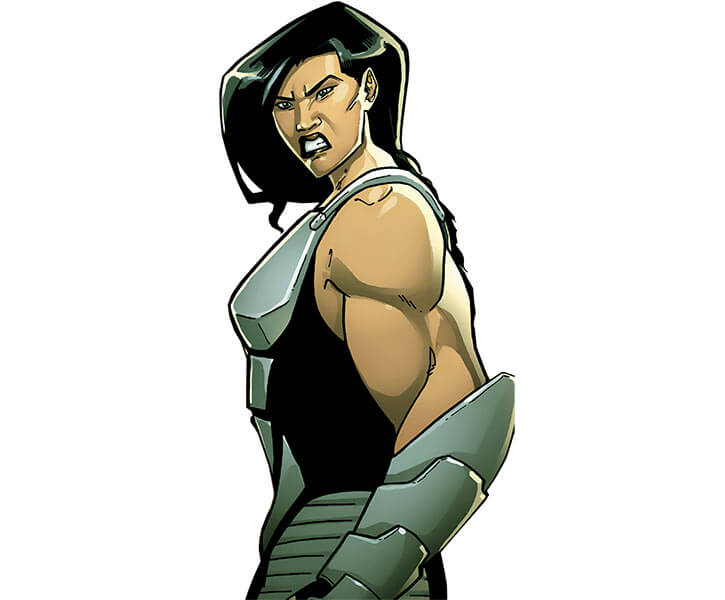 In some stories she looks more like a Latina. But this likely is an erroneous reference to panels in her original appearance where the ambient light is red.

(This may seem like a trifle. But this is primarily a TTRPG site, where we need to verbally describe characters to the players).

Her body armour-like costume resembles that of the military synthetics in the Alien sci-fi universe. It may be a hint that she’s a LMD, or (more likely) a coincidence/a purely visual reference. 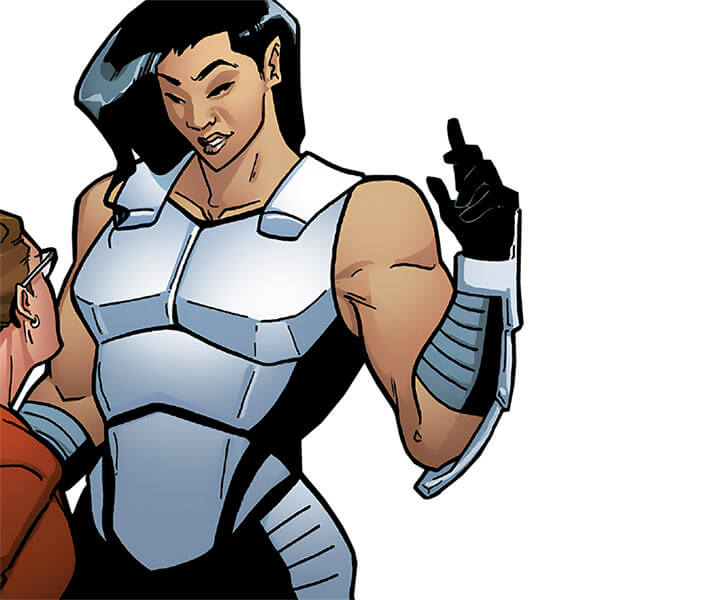 Might is confident and domineering. But she is a bully relying on her brawn. If something can hurt her, she’ll suddenly become much more cautious.

She seems to be the most political of the team. Might is disgusted by any notion of social justice, fairness, equality, working and living together, etc.. To her the world must be where the mighty forever exploit, silence, humiliate and oppress everybody else.

She’s also the most interested in the Freelancers as an actual enterprise, rather than a cash dispenser.

Might is articulate, and with a good sense of repartee.

Ms. Marvel: “You’re burning down a state forest for money ?! How do you sleep at night ?”
Might: “I sleep on the comfortable mattress I bought with money I got for doing stuff like this.”

“That makes perfect sense in *your* world. What better way to say, ‘shed your sympathy tears in your safe space, snowflakes ?’. But it was a stupid move in the *real* world. You should have trademarked your little social-change symbol *before* we did. Nice burn on you, *and* a good financial move. There are people already clamoring to pay huge amounts for the pleasure of undermining your crusade.”

Characters with this level of bulk often are “Class 50”. But when she punches Vivian Vision from behind, the damage is nothing to text home about.

It is possible that her stats need a mechanic about people hurting themselves when they hit her. As with Luke Cage. But there just isn’t enough data.