Mikas the Soulfather is an obscure Iron Man enemy, who only appeared in a 1971 storyline.

This story was a strange one, though, and Mikas is an… eccentric and powerful foe.

Said storyline was part of an epic, quasi-crossover between multiple Marvel Comics – an unusual approach back then. It involved a time-travelling killer robot from the far future, and intricate machinations.

The villains featured in this arc, such as Mikas, have an odd quality that makes them both weird and generic.

This profile assumes that Mikas was a sophisticated robot. But the material refuses to state whether that truly was the case.

Mikas is said to have the power of a god, and to be able to tap the power of the earth with his mind to produce a variety of effects. One suspects that “the earth” actually refers to the netherworld, since Mikas’ powers have a strong diabolic theme.

(Perhaps viewing “the earth” as infernal is a clue about the state of the planet in Mikas’ creator’s era. But heh, prolly not).

His powers as “lord of Earth and the Inner Mind” include : 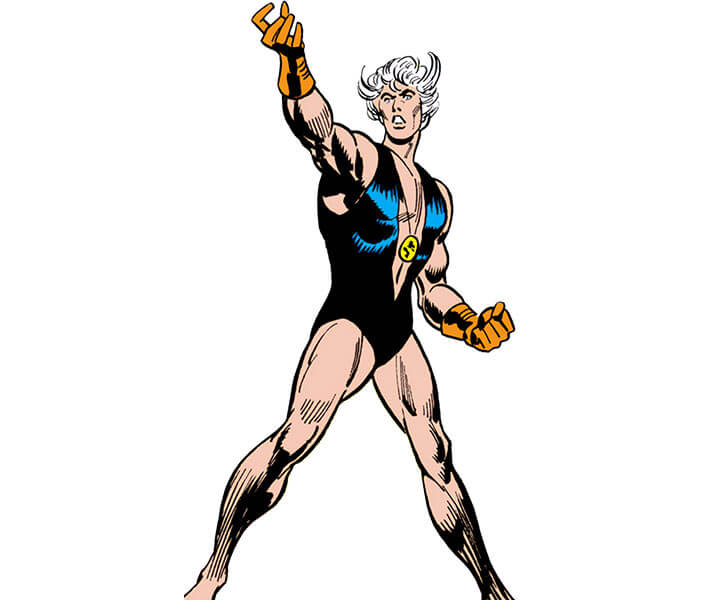 These are the first things he sicced at Iron Man. If facing multiple opponents, Mikas might field more such demons.

The bite of those demons somehow made people blind. This worked even on Iron Man, whose armour the demons’ fangs couldn’t penetrate. Maybe the act of biting makes the demons generate an invisible blinding field around themselves, or something.

Usually, one demon will keep blinding the target while the other batters it. Both will batter if the target seems to be solidly blinded.

However, once they get roughed up a bit, they tend to cowardly stand back and let their master step in.

What is Doomprayer ? Who knows.

I’ll assume this is a robotic snake anchored to the floor of a pit below Mikas’ cavern. Holographic projectors give the impression that the pit goes on forever and that Doomprayer is near-infinite and coiled around the planet, Jormungand  -style.

Doomprayer is Mikas’ master weapon. He will activate it when he feels that he is running out of steam. To do so he will teleport himself and his opponents (likely caught in a force field) to another part of his cavern, which looks like the interior of a sword-and-sandals  palace.

A chunk of the floor can be made transparent, revealing the infernal vision of Doomprayer’s pit (an Intimidation attempt made by Doomprayer, in DC Heroes terms). What happens next is presumably Doomprayer bursting through the transparent floor to kill everything.

Likewise, the Dark Ones were never seen in action. We can reasonably assume that they were superstrong combat robots. But what special capabilities they had, if any, will forever remain unrevealed.

They might have a special power tied to darkness. 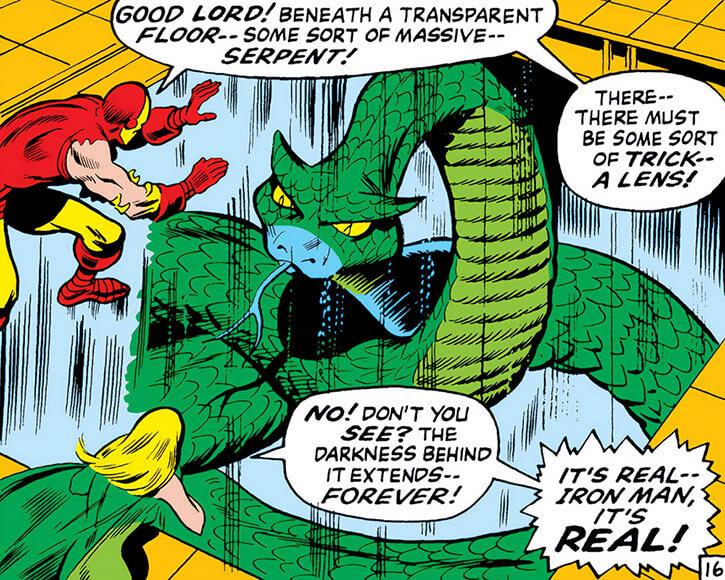 Mikas claimed to be a mentally handicaped boy found in Mexico (where he was “birthed in misery and living in squalor”).

By this account he was mutated (in “radiation baths”), mentally healed, and trained as a killer.

You are a servant of the Assassin

In actuality, he was an insane robot built using technology from the far future of Mister Kline, the Assassin.

Mikas was worshipped as an infernal god by scientists at the Mutant Sector research centre, who doubled as a cult serving the Assassin.

In 1970, the Assassin ordered Mikas to kill Tony Stark.

The Soulfather started by kidnapping Stark’s girlfriend Marianne Rodgers, whose psionic powers had foiled the previous attempt against his life.

Another agent of the Assassin used future technology to give Iron Man a cryptic vision, then teleport him to Mikas’ subterranean base while draining his armour’s power reserves.

Meanwhile, Mikas used his own psychic powers and the Dantesque  decor of his lair to convince the psychologically fragile Marianne that he was a lord of the underworld. And that she was secretly a demon queen.

Hell is for children

Still, Iron Man was low on power and highly disoriented. He only barely got out after Mikas threw him into a magma pit.

The Golden Avenger tried to attack, but was defeated and ran out of juice.

Stark tried to reason with the dazed Rodgers. Though that did not really work she started feebly advocating for Stark, and Mikas slapped her in anger. This broke his control over her.

Not knowing what to do, Mikas was ordered by the Assassin to activate Doomprayer. He thus teleported to Doomprayer’s room along with Iron Man and Marianne.

In a last ditch effort, Iron Man wrecked the room before Doomprayer could emerge from his seemingly bottomless pit, then passed out.

Though Stark now thought that he was truly in Hell, O’Brien told him that it was just some sort of movie set underneath Washington, D.C., crewed by robots.

Mikas’ severed robotic hand was spotted in the wreckage, but he was never seen again. 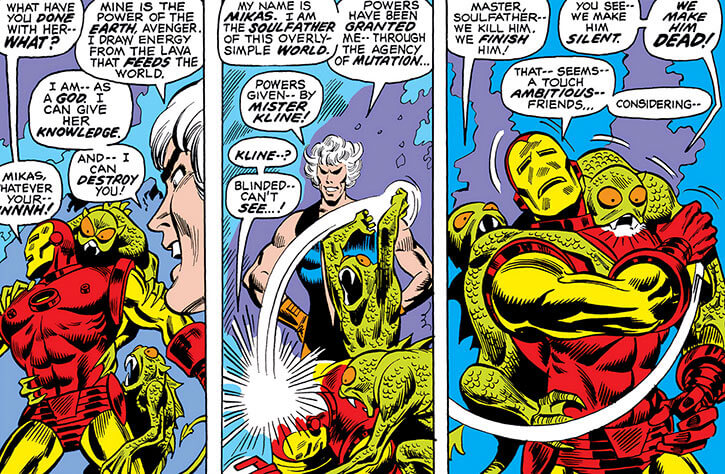 The curly hair, huge medallion, junevile air, top that’s split open to show the torso were reminiscent of certain bands such as the post-mod The Who.

Mikas is delusional and unstable. He keeps making vague claims about the terrible, tangled secrets of his own nature, the netherworld, the depths and mutation.

He also keeps ranting about being a god, about being unbeatable, how all his enemies should just throw the towel and bow before his power supreme, etc..

What story he has been fed is unclear, but it must be one hell — no pun intended — of a tale, with a 1970s sci-fi flavour.

Mikas was confused by strong emotions around him. This made him prone to making up some convoluted and psychotic explanations about things he didn’t understand, ranting about them as he tried to integrate them into his surreal world.

If Mikas survived (albeit missing a hand) and thus discovered the “greatest irony”, as Mister Kline put it — that he was a robot — his mental state must be… interesting. 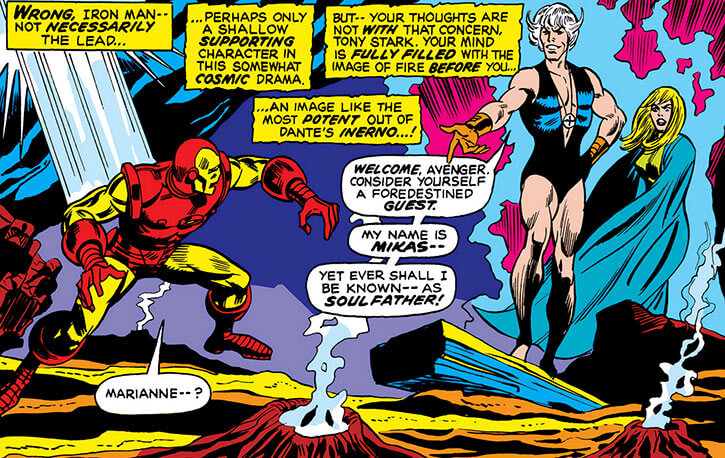 “Quite fitting, sir. Any specific orders ?”

“But of course, Mister Kline. For what else have I trained ? Why else was I… transformed ? As you command… Soulfather goes !”

“For this was my destiny given ! For this… have I traveled this road of fate…. The strength is mine ! The vision… fulfilled !”

“Mine is the power of the earth, Avenger. I draw energy from the lava that feeds the world. I am — as a god. I can give [Marianne Rodgers] knowledge. And — I can destroy you ! My name is Mikas. I am the Soulfather of this overly-simple world. Powers have been granted me — through the agency of mutation… Powers given — by Mister Kline !”

“Stay quite as you are, Iron Man. That is a thoroughly fitting posture. Thoroughly fitting – for a man to worship his god. Poor fool. You must have known — gods cannot be killed. Only men can.”

“Even your strongest blows can’t harm me ! Mine is the earth- strength… a strength… supreme ! The play is ended. The curtain… closed. Yours is but a plead… for your pitiable soul. Plead, avenger… PLEAD !”

“Fool ! Did you think I’d ever be unprepared ? That which you’ve just met is an ethereal force-shield ! None may pass through it — but Mikas !”

Agent of the Assassin.

“Master, Soulfather — we kill him, we finish him. You see — we make him silent. We make him dead !”

SPR (anchored in its pit, a bit like that plant-like giant tentacle in that rocket silo in Half-Life).

“The master commanded that you fall. All must obey the master’s commands !”