Balrog is one of the earlier, most memorable baddies in the Street Fighter universe. He was in SF2, back in 1991.

In the US, M. Bison was renamed Balrog. And Balrog — another game boss — became Vega. Capcom USA feared that they would get sued over the blatant Mike Tyson  parody that the Japanese branch had created.

This of course has absolutely nothing to do with any Tolkien character. Or enjoyable representation, for that matter.

Balrog fulfills the generic role of heavy-handed enforcer. He could thus be useful as a villain in a variety of campaigns. That and there’s something funny about having the characters fight a super powered Mike Tyson rip-off.

Balrog was once the undisputed heavy weight boxing champion of the world before getting banned. That and his boss status in SF2 make him in the upper tiers of Street Fighters.

All of his moves rely on sheer, bone-crushing brute force. He was strong enough to kill one of Dhalsim’s elephants with one punch!

He can also run almost as fast as a car. That’s why his lunging maneuvers come out so fast and explosive. Oddly enough these ramming moves don’t injure him like they should (in DC Heroes RPG terms, Skin Armor with the appropriate limitations.)

In video game terms he’s a charge character that is best played defensively. But he has plenty of moves for punishing mistakes. And his arsenal of charge moves allow him to easily close the distance and inflict the maximum amount of damage.

That’s basically all he has going for him. Other than that he’s dumb as a stump, has the manners of a rabid dog and is a greedy money-grubbing opportunist with delusions of grandeur. 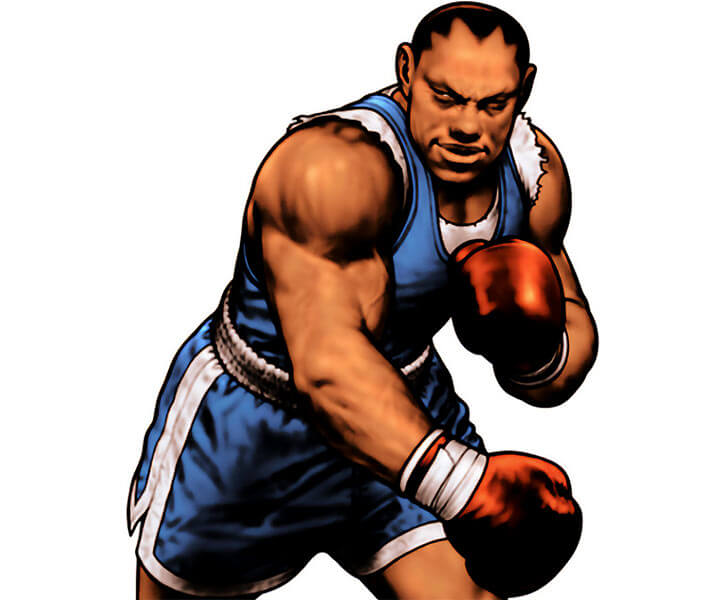 Balrog was an angry kid. He grew up in abject poverty somewhere in a major American city.

(It’s never confirmed, but it seems to be Las Vegas. That’s where a lot of prize fights are staged – and that’s where his stage is in the game.)

At his height he was the undisputed heavy weight boxing champion of the world. This likely was during the 1980s. But the SF universe’s sliding time  and constant retconsMaking changes to a character or story after the fact make it hard to pin down exactly.

However, he was not without his share of controversy. He permanently injured several opponents. And often used illegal moves – such as his infamous head butt.

Mr. Bison eventually killed another fighter during a match. After that the boxing commission had enough and issued a lifetime ban on him boxing again.

Balrog was of course angered by this. But over time he came to realize that while the fame was great, he was far more interested in the money. However, he’d pissed away most of his prize money on fast cars and loose women.

He therefore started working for gangs and mobs. Since he knew he wasn’t bright enough to plan his own crimes.

He eventually came to the attention of Shadaloo. And stayed with them, because they paid the best.

Due to his brutal efficiency, Balrog quickly came to the attention of the big boss Master Bison. 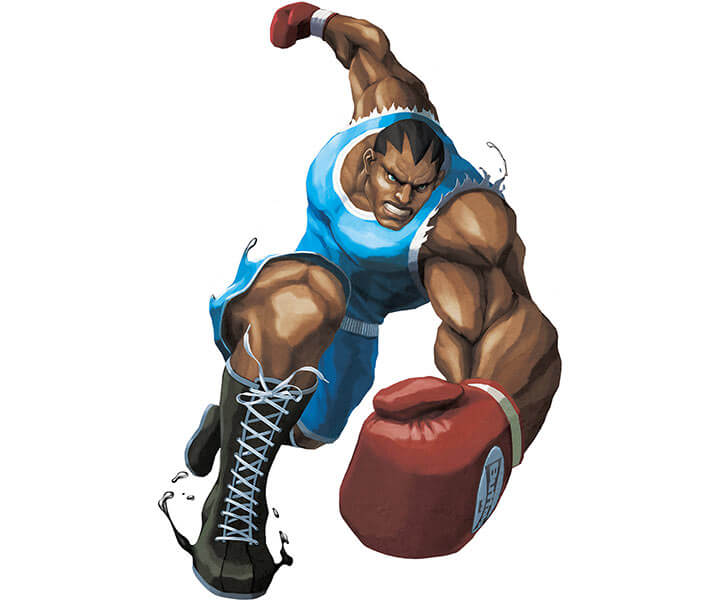 In his earliest documented assignment, he was sent to eliminate former colleague Birdie. The brutal boxer tracked down and overcame his target. But in his desperation, Birdie let information about the Psycho Drive slip.

Balrog didn’t completely understand what it was. But he figured that it would be profitable. So the two teamed up.

However, the Psycho Drive was blown up by Chun Li, Charlie, and Guile. Balrog cursed his luck as he suddenly realized that he hadn’t been paid yet.

Oh, and he also killed one of Dhalsim’s elephants somewhere along the line. By punching it in the head. Purely out of spite.

The events of the previous game threw Shadaloo into disarray. But they eventually regained their standing as a worldwide criminal empire.

Balrog stayed on as its chief enforcer/bodyguard for Bison. But his employer was eventually defeated by a coalition of heroes.

Since Sagat (previously the number two) had already left the organization and Vega (next in line) had zero interest in running such an “ugly” organization, leadership fell to Balrog.

He quickly ran it into the ground.

But like any true supervillain Bison didn’t stay dead. He resurrected his criminal empire once he had a new body sorted out for himself. And Balrog was brought back into the fold to do what he did best.

His first assignment was to pick up Seth, who had been beaten by Ryu. After dropping him off at Shadaloo HQ he was assigned to guard Bison’s replacement bodies.

The disgraced boxer quickly grew bored with this. So he made his way into the S.I.N. building (Shadaloo’s weapon development division). His hope was that he would stumble upon something of value.

At first it didn’t pan out. But he eventually noticed a boy who had the Shadaloo emblem emblazoned upon his forehead and hand.

Once again, the heroes defeated Shadaloo and the building was blown up. However, Balrog managed to escape with the boy. Once outside he demanded to know what the boy could do, but was disappointed when he was informed that Ed had no real power on his own.

Balrog was last seen carrying him off on his shoulder. He was thoroughly convinced that his captive would have some sort of value at a later date. 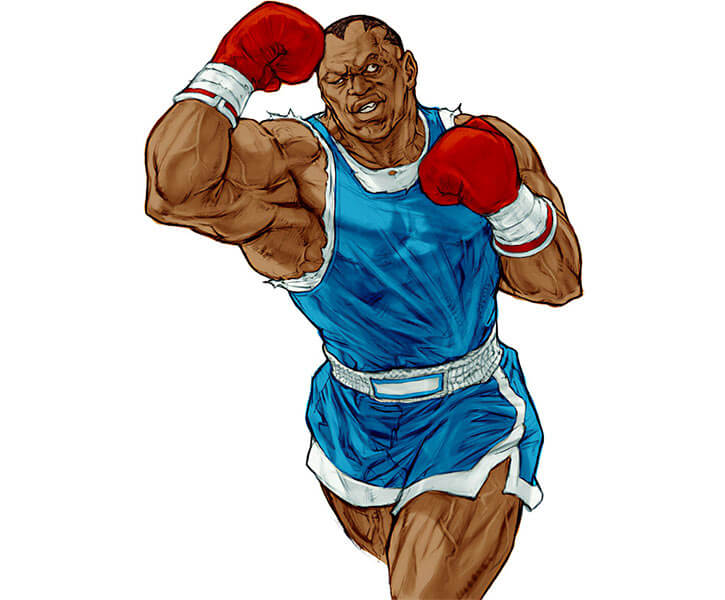 F.A.N.G., a fellow Shadaloo agent, was impressed that Balrog had found the bandaged boy. She told him about Shadaloo’s new plan Operation C.H.A.I.N.S..

She also warned that Balrog would have no place in it. As he had taken the boy out of their facility, seemingly betraying Shadaloo.

This enraged the boxer, who forced F.A.N.G. to flee and knocked off her hat. Young Ed then used his Psycho Power for the first time, burning the hat.

Surprisingly the two became friends. They traveled to China to meet with another shady character – Urien. But before they could conduct their business, they were attacked by Necali.

Urien shouted out to Balrog that if he were to defeat the demon, he would receive a hefty reward. The brutally belligerent blacklisted boxer of beefy brawn then set about doing what he did best. Defeated, the demon turned to ash.

Later, back at the base, Ed remarked that Urien seemed like a jerk. Balrog assured him that after receiving payment, he’d bash his face in.

(Urien’s story sequence shows a different version of these events. Balrog defeated Necali while waiting for Urien, then insulted him and tried to extort him for a larger payout. Urien dominated the fight against Balrog, dispersed Ed’s Psycho Power, and kidnapped the boy.)

Balrog doesn’t appear as a playable character. But he was in one of the secret files in the game.

Despite it being wrestling-centric, he participated in the Vale Tudo Eternal Fighting Tournament. He reached the finals, where he fought Alex.

Although the boxer dominated the fight early on, Alex made an impressive comeback and ultimately defeated him. 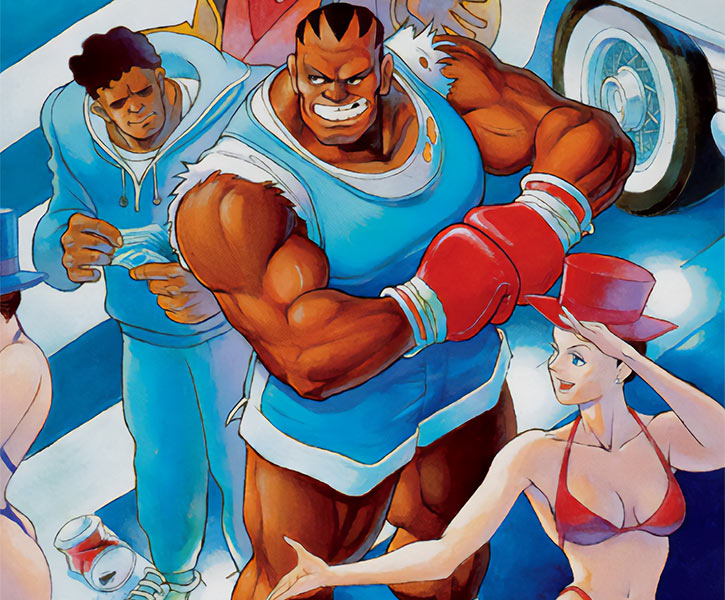 Balrog is a very large muscular intimidating African American man. His face is almost always contorted into a snarl.

He typically wears blue boxing trunks, a matching blue tank top and a white T-shirt with the sleeves ripped off. He of course wears red boxing gloves as well. No word yet on if he’ll get a tribal tattoo on his face. 😉

Balrog’s a simple, straight forward, dumb-as-an-ox thug. He dreams of wealth and power, but has no idea how to obtain it other than beating the crap out of people.

In a lot of ways he’s supposed to represent the broken American dream. He grew up in a poor family, but was able to become successful for a moment. Only to lose it all again due to his own ambitious greed and bloodlust.

The only real redeeming facet — and aspect of approaching normal — is the friendship that he forms with Ed. The two seem to get along quite well and actually care for one another. It’s the only time that we see Balrog act like a normal person and not be all about the Benjamins.

“Damn ! My fists still have your blood on them !”

“My punches are stronger than your kicks !”

“I’ll make you wish you were never born you two-bit chump !”

He could easily be dropped in for mid-level heroes. He could also be a pit fighter for Roulette – and perhaps a Wildcat opponent.

Supposedly his boxing gloves have horse shoes on the inside of them. I couldn’t find an official statement to verify this so I left it out. If you want to add that, feel free to add one AP to his EV – or adapt brass knuckles stats.

Prior to joining Shadaloo he had no Connections and a Wealth of but 001.