The Mime is a minor Batman foe.

Camilla Cameo is a talented, practised mime. Even people who dislike mimes will usually like her performances.

She excels at conveying and sharing emotions, provided that her public is empathic enough.

She seemed fairly smart and resourceful – her crimes weren’t exactly easy to commit.

As the Mime, her main weapon is a low-to-mid calibre pistol. Silenced, obviously.

Her backup weapon is that her gloves are electrified. This is not detectable unless the gloves are taken apart, and the shock is sufficient to knock out even Batman if taken by surprise. The current doesn’t seem to be lethal, though. 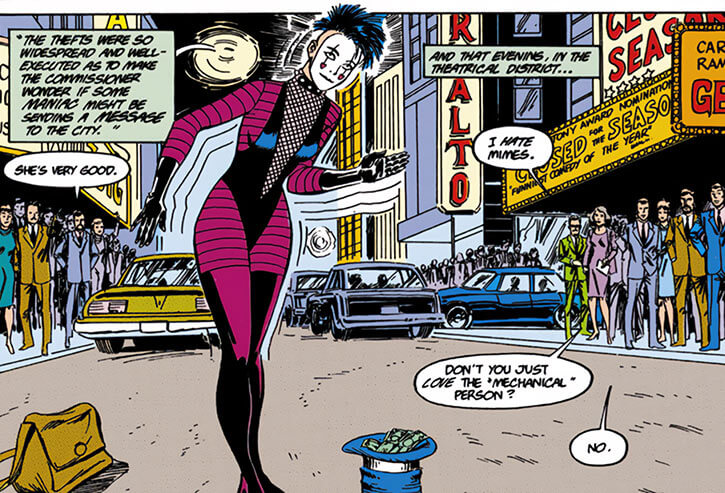 Camilla Ortin is the daughter of the “Firework King”, a wealthy industrialist.

Mr. Ortin was obsessed by his explosive products. He kept experimenting with them even at home.

His daughter came to develop a pathological dislike of loud noises. One assumes that she was shocked by a sudden deflagration or five during her early childhood.

As an artistic child, Camilla trained as a ballet dancer until both her parents perished in an explosion at one of Mr. Ortin’s plants.

Inheriting their fortune, she decided to throw herself into her preferred art form – mime.

She studied with Marcel Marceau  and other masters. Ms. Ortin then returned to her native Gotham City and set up her own mime troupe, the Cameo Company.

Though their work was good, there just wasn’t enough of a public for mime. Running the troupe consumed Cameo’s wealth.

For a while the troupe carried on thanks to regular appearances at the Gotham Civic Center, but city funding for the arts was eventually axed.

Circa 1982, Camilla Cameo had to disband her crew and dropped out of sight, her fortune exhausted.

In 1987, the Mime made her debut as a Gotham-style costumed, themed criminal. As her first crime, she stole the clapper of the main churches in Gotham, silencing the bells.

Later on, while giving a successful street performance, she triggered a traffic jam. When an irate taxi driver used his horn, the Mime shot him with a silenced pistol through his windshield – though the man wasn’t badly wounded.

Batman (Bruce Wayne) chased and cornered her. But he was surprised by the Mime’s electrified gloves and Ortin escaped.

This commercially successful but artistically uninteresting KISS  clone band was billed by the Center to inject a little cash into the coffers. But their loudness apparently angered Ms. Ortin.

The Mime sneaked in, cut the power and knocked out the band with her gloves. She started giving a mime performance for the large Blister Twister public, but Batman and Robin (Jason Todd) arrested her.

On the hush hush

In 2003, the Mime was spotted among the Arkham Asylum inmates.

She still had her mohawk, and her full face painting, even in her cell.

She was among those attacked by superhuman zombies, who were invading from the basement.

Weirdly enough, other versions of the Mime have appeared in continuities that are outside the DC Universe. All of you big Camilla Cameo fans can find her in :

When in costume and makeup, Carmilla almost always moves and emotes with the stylised, amplified body language and facial expressions of a mime.

She seems to be a typical Gotham nutcase. But she isn’t murderous – all her victims were back on their feet within an hour at most.

Her two main things seem to be : 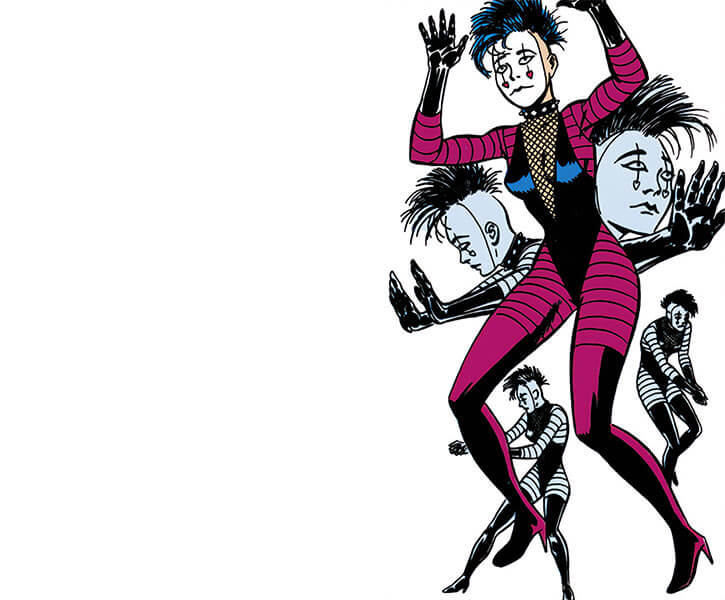 The high Unarmed Offense reflects the fact she just needs a light touch for her gloves to shock. It makes her more efficient than she should if she’s cornered into having to punch it out, but since that’s so unlikely to happen…