Mimic can permanently duplicate the powers of five different mutants. But at best, he will have half their power level. He will also adapt physical characteristics stemming from the powers, such as angelic wings or large hands and feet.

This gives him a formidable array of powers, and he will not hesitate to combine them. Examples include making Wolverine’s claws as strong as osmium steel and backed by the power of Colossus, or to propel a Colossus-like body into an opponent with the speed of Northstar.

On his Earth, Mimic has also grown to fill a role occupied on Earth-616 by Cyclops. Howbeit, he’s not an obsessed perfectionist like the Scott Summers of Earth-616. Still, he has strong leadership abilities, a clear head, courage, the experience of the leader of a major super-team, an unusual sense of tactics and great training.

On Earth-616, Calvin Rankin was a menace who fought the X-Men. He reformed and became a X-Man for a short time, but was killed when he attempted to duplicate the abilities of the Hulk.

On another Earth, a slightly different Mimic also started by walking on the wrong path and falling in with the wrong crowd. His father might have been a brilliant scientist, but he was a terrible businessman and they lived in near-poverty. Thus, Calvin became a petty thief to pay the bills.

With puberty, his mutant power emerged, leading to pain and headaches. But his was a power that was not obvious, nor could it express itself unless he came near mutants. Eventually he felt a strange, intoxicating sensation when crossing the paths of five teenagers — the original X-Men — and shadowed them. After two hours he lost them, but he had already mimicked some of their powers.

Realising he was a mutant, the angry young man quickly chose to throw his lot with the Brotherhood of Evil Mutants. However, when he attacked the X-Men to prove himself, he was defeated and the Brotherhood abandoned him. While at the Fort Terahawk prison, Calvin was visited by Charles Xavier, who convinced him to make something of his life. The Mimic became a X-Man, the sixth one.

He got along famously with the team, sharing deep insight into each member’s powers and difficulties. In his world, Scott Summers never went past his shyness. As a result, Calvin became the field leader of the X-Men, essentially assuming what became Scott’s role on Earth-616. That was true both with the original team and an all-new, all-different team.

Calvin was recognized as one of the greatest heroes of his world, where mutants were never ostracized and hunted. He knew great success. His friendships with his fellow X-Men, especially Wolverine, were deep.

However, something reportedly went wrong with a part of the timestream. Information started to propagate. It would erase some anomalies but also some timelines , and triggers retcons  in numerous realities.

The impact of this on Mimic’s timeline would be to have his first mission with the Brotherhood retroactively go bad. A bus full of kids would be blown up. Mimic would thus end on death row instead of knowing success and glory.

Mimic was recruited into a small group of youths from threatened timelines. They were assembled by a halfling-like being called the Time Broker. The Broker said that he could send them to alternate timelines to rectify anomalies, thus making sure the retcons never propagate to wreck their lives.

The youths agreed to the deal, and started dimension-hopping as the EXiles – accomplishing sometimes cryptic missions on numerous alternate Earths.

Wherever he goes he stays a stranger

Some missions were especially hard for Mimic, who had quickly become the team’s leader. For instance, the Exiles intervened to help the Imperial Guard kill Jean Grey, who in that reality was about to permanently become the Dark Phoenix. During this fray, Calvin had both to fight his best bud Wolverine, and witness him killing Jean.

Early missions also cost him two team members – Magnus and T-Bird. Both were almost immediately replaced by other people from threatened timelines, with no time to mourn. On the other hand Calvin grew close to Blink, whom he had previously made co-leader, and they later became lovers.

After an inadvertent separation from the team, Mimic spent four years on a Brood-controlled Earth. In order to survive, he was forced to kill many people who had been taken over by the Brood. Rankin was also infected, but the healing factor he had mimicked from Wolverine kept the alien embryo from taking over.

When he was reunited with his team mates, Calvin did not have time to explain what had happened as they were caught in another battle. Mimic was injured during this fight, his healing factor was overwhelmed and the Brood embryo became dominant. Mimic was saved, but not before he killed fellow Exile Sunfire.

That murder drove a wedge between Mimic and his team mate Morph, though Morph eventually forgave him.

Over time, the Exiles’ missions and the Time Broker became increasingly irrational. The Exiles hatched a plan to gain access to whatever place their missions originated from. They succeeded in entering the Crystal Palace, an extra-dimensional observation post built by an unknown but long-gone people.

An alien race nicknamed the Bugs had found the Crystal Palace. While experimenting with the machines therein they had inadvertently damaged numerous realities. The Exiles had been gathered by the Bugs, masquerading as the Time Broker, in hopes of repairing those realities.

To the Exiles’ horror, they discovered the reason for the increasingly ridiculous missions. Some time prior, the Exiles had encountered Weapon X, a counterpart to the Exile. It was composed of anti-heroic and villainous members and assigned to missions requiring assassinations and other morally questionable tasks.

Weapon X was led by an evil version of Hyperion, who died in combat with the Exiles. Like the other fallen Exiles and Weapon Xers, Hyperion’s body was recovered and stored in the Crystal Palace. Unbeknownst to the Bugs, remnants of life lingered in Hyperion’s body and he eventually regenerated.

Once he had regained his full health, Hyperion broke free of his coffin and took over the Palace. He forced the Bugs to put the Exiles through various humiliations and stresses as the first part of his revenge upon them.

Afterward, the Exiles spoke with the Bugs and agreed to continue helping them repair the multiverse. However, this time members of the Exiles worked on both ends of the assignments, with advisors in the Crystal Palace relaying information and help with more efficiency than the Bugs had previously.

Death of a leader

Because of all the deaths Calvin had seen and committed on the Brood-infested parallel Earth, he had sworn never to kill again. This would prove to be his undoing.

On a later mission, the mutant Proteus attempted to possess Mimic. Driving Proteus to try this was actually part of the team’s plan. Mimic still had Colossus’s mutant power and was supposed to transform as Proteus tried to enter his body, killing Proteus just as Colossus of Earth-616 had originally.

At the moment of truth, Calvin hesitated to violate his oath not to kill. Thus, Proteus succeeded in taking over his body. As with Proteus’s other victims, Calvin’s body wore out and was eventually discarded.

After Proteus was stopped, Blink returned Calvin’s body to his home dimension. Rankin was buried by his many friends with full honors.

Mimic is a successful, cool, well-adjusted young leader. He had a great life, is a great hero and really enjoyed success, nights at the karaoke with Wolverine and the like. He even had written his autobiography. Although he misses the good life, he’s a great leader for the EXiles – smart, experienced, in control, courageous, knowledgeable about the whole super-hero business.

Although he cares for his teammates, Mimic has no real flaws or weak points. He thus does not like to dwell at all on the growing and sickening feeling he does not really loves Blink, and is just with her to have a safe place.

Drawbacks:
Exile (Involuntary), Fatal vulnerability to being in close proximity to gamma-powered creatures.

Equipment:
Mimic has a Cylops-like VISOR [BODY 03, Accuracy (optic blast): 10] but it was destroyed early in his career as an EXile.

Power of the Mimic

The Adaptation Powers of the Mimic have the following restrictions :

Mimic eventually sheds the Angel’s wings to absorb a portion of the Dark Phoenix’s Power. He quickly discarded it, and then later replaced it the following :

The stats assume that almost none of the persons encountered in alternate realities had significant HP totals. 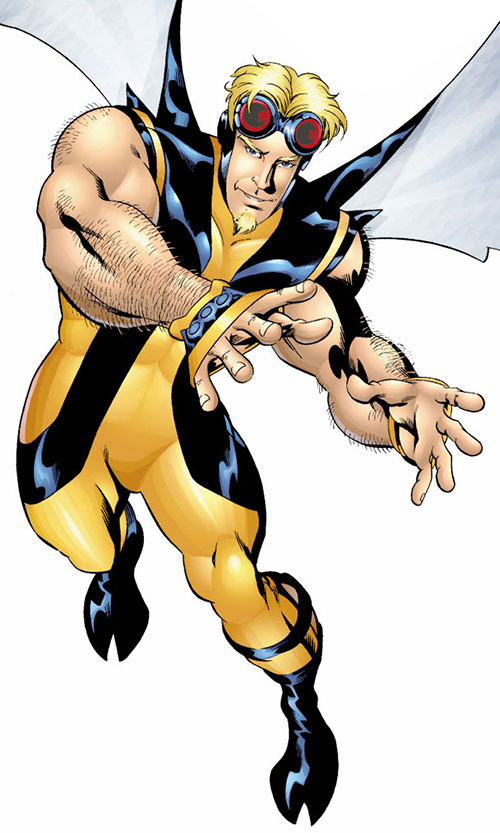 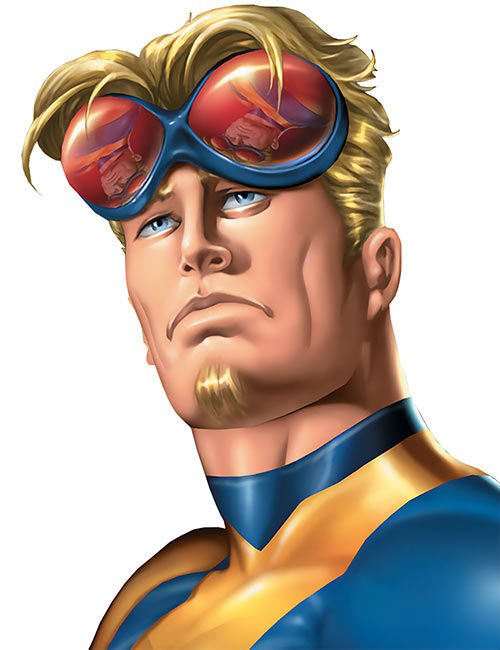 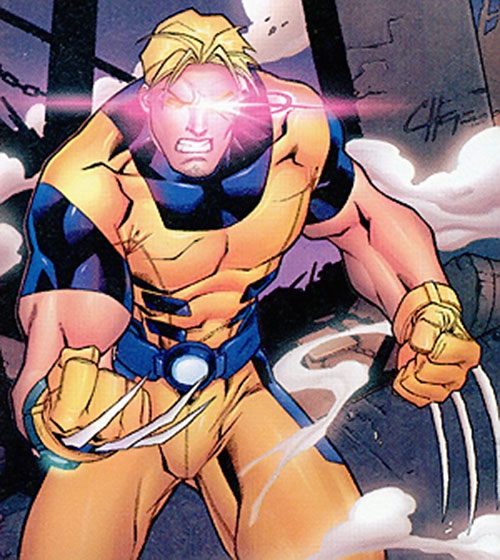 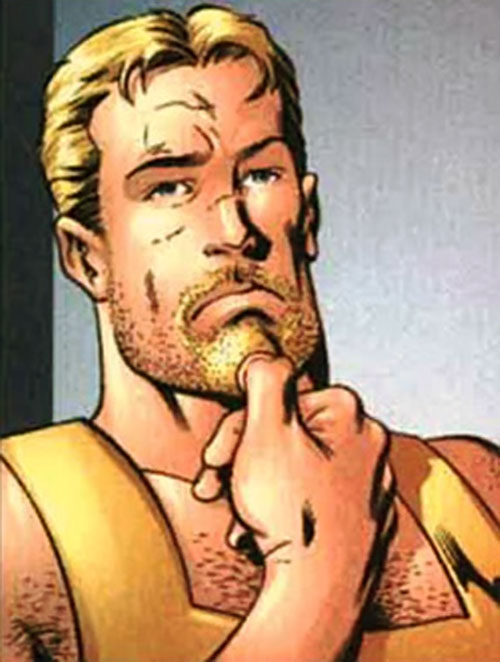