Mind-Wave is gifted with extra-sensory perception – primarily, the power to read unprotected minds. This allows him to predict his opponents’ actions, countering their plans and fighting moves. But he couldn’t, for instance, scan Daredevil’s mind to learn his secret identity.

Mind-Wave supplements his psychic abilities with technology – primarily psychotronics  and weapons. We assume that he’s an adept psychotronician but buys the rest. It’s not clear in the story.

Mind-Wave’s henchmen, the “ESPer-ts”, are not particularly capable. But he can telepathically coordinate their fire if they have their helmet on. There were between four and eight such guys during the 1976 encounter.

The Think-Tank is a large treaded vehicle with a powerful laser cannon, radars and even a paralysis beam.

The Think-Tank can be controlled telepathically, and can “perceive” its environment through sensors. Mind-Wave can give it orders and coordinate its attack much like he can enhance other ESPers. The Tank thus has some sort of silent artificial intelligence or expert system. Or heh, it might be the equivalent of a RoboBrain™ platform.

The Think-Tank is usually operated manually by a crew of three (Mind-Wave and the two ESPer-ts in the frontal bubbles), since telepathic control requires concentration.

Though it *looks* like a tank, the Think-Tank doesn’t seem seriously armoured. Daredevil (Matthew Murdock) could smash open one of the crew bubbles using a steel bar. Mind-Wave was also careful not to face an organised NYPD response. Presumably, copious .223 FMJ fire would be sufficient to damage the Think-Tank.

Tales from the crypt

During his return as an undead, Mind-Wave seemed weaker and dumber. Though he boasted that he was a “mind-melter”, he never used mental powers.

He was also decades out of date.

Mind-Wave said that he plied his criminal looting activities through many different countries. He thus clashed with the Marvel Universe version of Uri Geller several times, always defeating him and evading the authorities. It is thus possible he’s Israeli. 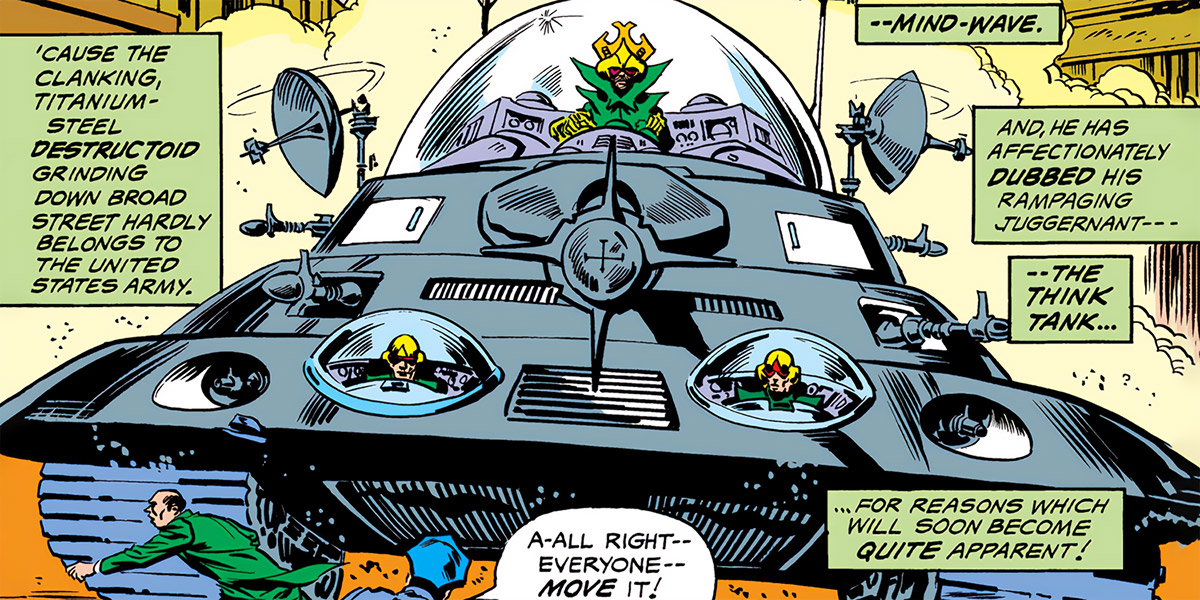 In 1976, Mind-Wave came to New York City to pillage Wall Street banks and jewellery stores. Daredevil attempted to stop him, but Mind-Wave got away. The District Attorney then had Daredevil meet Uri Geller, and the two teamed up to defeat Mind-Wave at long last.

Though Mind-Wave eventually recovered his freedom, he seemingly never returned to prominence. One suspects that having lost his psychotronic helmet, his Think-Tank, etc. had been too crippling a blow.

Ten years later, Mind-Wave was one of Scourge’s victims at the Bar With No Name.

However, in 2009, the Hood (Parker Robbins) used Dormammu magic to reactivate the Scourge’s victims as undead operatives. He told them that their murderer had been the Punisher (Frank Castle), whom he was trying to eliminate. Their attack was done disguised as the Avengers, using Mirage (Demond Charne)’ illusion powers. But that didn’t work at all.

The undead Mind-Wave was left crippled in a back alley, booby-trapped with a grenade. When others came in it detonated, seemingly incinerating him.

Mind-Wave is a thief and would-be lord among men, not a killer. He never kills anybody, not even dangerous and recurrent opponents, and went out of his way to develop a paralysis beam weapon.

“An interesting plan, scarlet clown. However, any plan is virtually useless against Mind-Wave — for every thought is clearly heard through my helmet — and therefore, silently counter-acted !”

“One chance, Geller. Join with me ! Become my partner ! We are not unlike each other… and we are far different from the others ! We stand above… and we are superior to the rest. Speak, Geller !  What do you say ?”

A good chunk of the stats is arbitrary from lack of material.

“ESPer” in this story seemed to meant any person with some psionic potential. Presumably, in the vast majority of cases it’s too thin to be quantifiable in DCH terms.

We run into a conditional Initiative case (it only works against one person).We prefer avoiding that, but with predictive telepaths there’s often no choice.

The MIND-WAVE HELMET is written up in two parts to keep the notation clear – it is a single Gadget. Since it’s one of his core assets, I gave it full detail. If you want less detail, just replace the shell and visor stats with BODY 04, Skin armour: 01 and Shade: 01.

He doesn’t actually do anything as an undead. Therefore, no attempt at stats.

Mind-Wave’s uniformed henchmen are low-level ESPers. They help Mind-Wave operate the Think Tank (until Mind-Wave starts operating his tank telepathically) and act as infantry when needed, usually to loot the theatre of operation.

Mind-Wave coordinates them telepathically – both to give silent orders and to give them a view into an opponent’s mind when needed, thus allowing them to predict their adversaries’ moves (Enhanced initiative, Enchantment).

Use run-of-the-mill street thugs stats, plus the following gear :

Helper(s): Darci. His Marvunapp entry  for pointing out that a real name had been given for him in the OHOTMU. 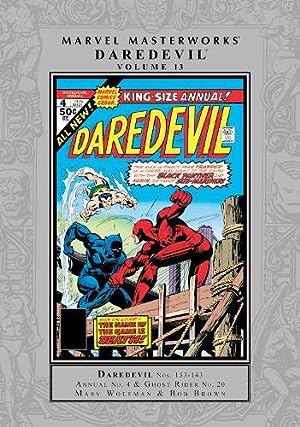 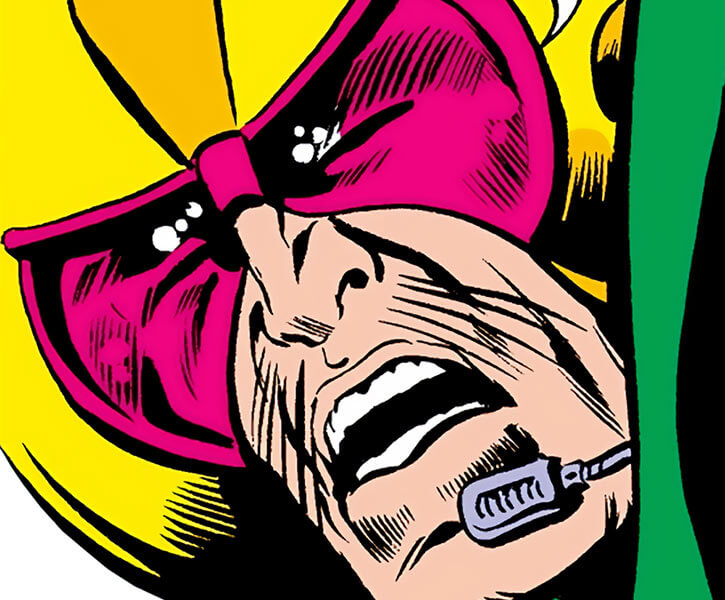 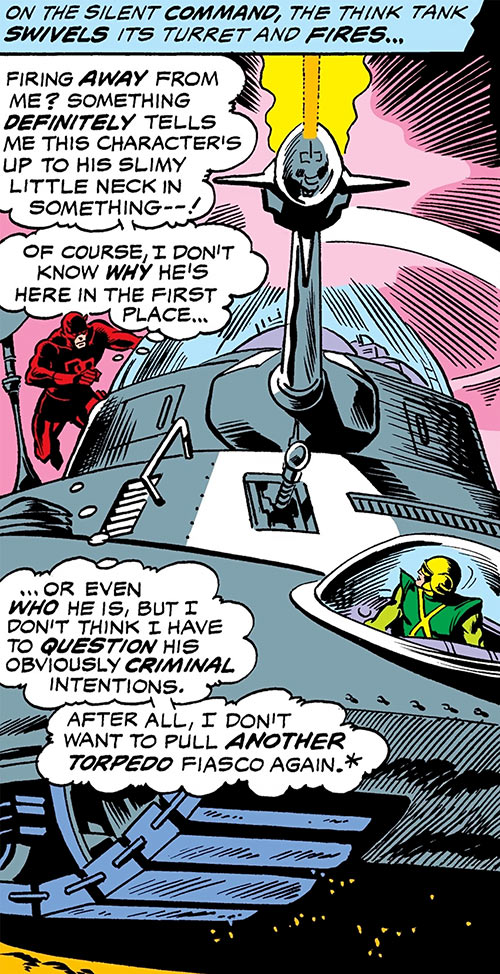 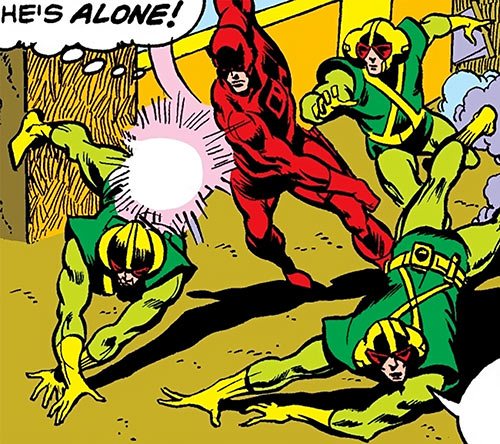