Mink is a character existing in a specific corner of the Marvel Universe, the Earth of the Squadron Supreme.

She appeared during the momentous 1986 events on that version of Earth.

She is a Silver AgeSuper-hero comics from the late 1950s to the early 1970s-style costumed lady thief, close to the Catwoman archetype of the 1950s. When we first see her she’s fighting a Batman analogue atop a giant typewriter.

Mink and her allies Remnant and Pinball had a profile in Dragon Magazine #143. Published TTRPG stats for superhero types were rare back then.

Mink seems nimble, perceptive and to have good people skills.

Ms. Steel is in great shape and has a stronger power of recovery than most would expect. In DC Heroes RPG terms, she tends to keep her Hero pointsDC Heroes RPG concept expressing narrative importance/immunity. to get away from bad situations such as been knocked out or imprisoned. Rather than to fight it out.

Her mink coat is reinforced to provide light armour.

Her bracelets can deploy two different weapon systems based on specific wrist movements. 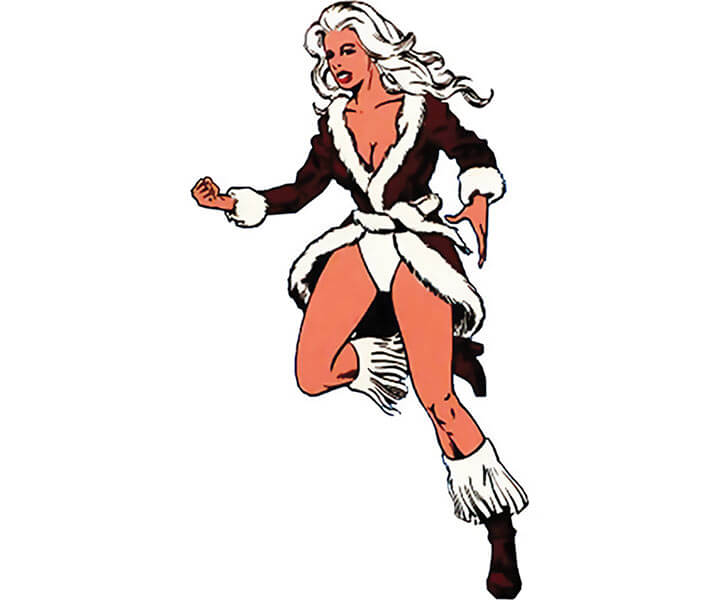 The “S” is short for the Squadron Supreme – super-heroes native of that Earth, and who are generally reminiscent of the pre-Crisis heroes of the DC Universe.

The formal designation for “Earth-S” is Earth-712.

Mink is a bored rich heiress who became a criminal for the excitement – and to feel special. She developed her skills and identity as a cat burglar, her thing being to steal the most valuable gems.

It seems likely that many of her capers were comparable to those of the Golden AgeSuper-hero comics from the late 1930s to the early 1950s and Silver Age versions of Catwoman. But with gems and other luxury stuff instead of cat stuff.

The rest of the time she was a socialite frequenting fashionable places. In part to case future thefts. Mink preferred to rob the rich : 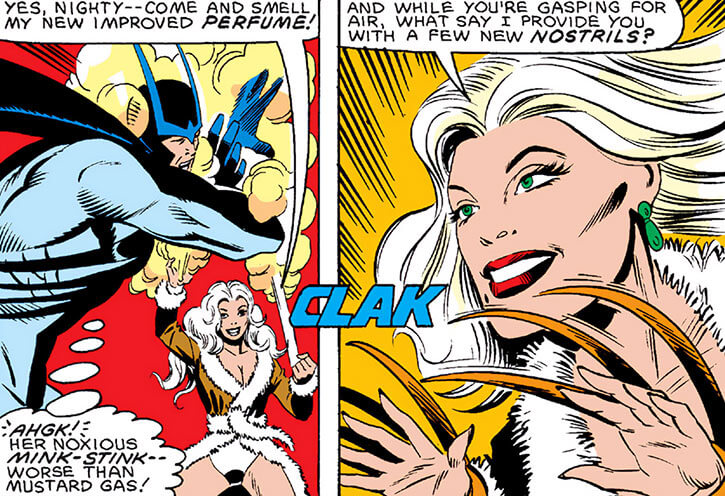 Mink was a member of the Institute of Evil, a group of super-villains organised by the time-travelling Scarlet Centurion of Earth-712.

The Centurion once had them fight the original roster of the Squadron Supreme as part of a shadow competition organised by the Grandmaster, an Elder of the Universe.

The other Institute members were :

During the 1980s, the super-heroes of Earth-S changed the rules by taking over the world to turn it into an utopia. Parts of their techniques involved brainwashing super-criminals to turn them into allies.

This horrified some of the campier, Silver Age-ish criminals whom Nighthawk fought. Among their number was Mink. Ms. Steel was the only one of the original Institute of Evil roster not to get brainwashed.

She and two similar rogues, Remnant (Frank Edwards) and Pinball (Chester Freeman), contacted the genius Master Menace (Emil Burbank) for a way out. He agreed to transport them to Earth-616The main Marvel Comics version of Earth.

The trio coincidentally ran into Nighthawk. Their old enemy had come to Earth-616 for help as he rebelled against the Squadron’s new policies. When Captain America (Steve Rogers) joined the fight, Mink surrendered. She immediately realised she stood no chance against him.

The three criminals, Nighthawk and Captain America negotiated. Eventually, Mink and the other two would join Nighthawk to struggle against the Squadron, and return to Earth-712.

Over the following days Nighthawk and his recruits assembled a force of super-villains with the help of the Sorcerer Supreme of Earth-712, Professor Imam. The team was called the Redeemers.

Five Redeemers, whom the Squadron didn’t know about, were successfully sent to infiltrate the opposition.

The original three Redeemers were kept in reserve, and were joined by another renegade Squadron member, the Black Archer (Wyatt McDonald).

Though they didn’t have much to do, Mink started dating the surprised Nighthawk. She had grown fond of him, since he was involving her in something that counted – rather than silly crimes to make her feel cool. As they were dating, Nighthawk trained her in basic judo.

The Redeemers allied with Master Menace. They then started capturing and de-brainwashing super-criminals who had been mentally conditioned into working for the Squadron.

During the showdown between the Redeemers and the Squadron Supreme, Mink engaged the magician Arcanna (Arcanna Jones) with her claws. The thief forced the wizard to run, thus denying her powerful magical support to her allies.

But Arcanna nevertheless blasted Mink away with a gust of wind, taking her out for most of the fight.

The former jewels thief woke up to see Foxfire murdering Nighthawk. In a cold rage, Mink fatally stabbed Foxfire in the back with her claws. She was then blasted by Doctor Spectrum (Joe Ledger) though she soon recovered. 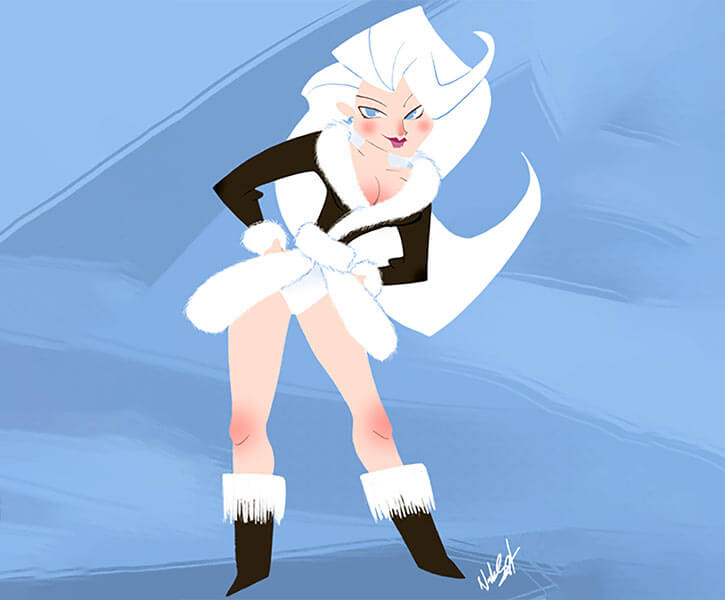 Mink’s costume is a mink coat, a white or beige leotard and fringed boots. The sleeves of her coat usually cover her bracers.

Her hair is almost silver-coloured, and she has a gorgeous smile.

That doesn’t mean she isn’t willing to get her hands dirty, though. Her artificial claws are pretty sharp. She’s not a killer, but she has no problem slashing people to force them to leave a fight and get medical help.

She seems to have previously operated in a genre where the relationship between heroes and villains was more akin to some sort of game or sport than any sort of realistic law enforcement. And where nobody important ever died.

Howbeit, her whole world hardened with the Squadron Supreme’s project. Its reality axioms changed, so to speak.

Mink seemed badly affected by all the deaths during the final battle. One assumes that she was particularly shaken by having murdered Foxfire.

Mink tends to act in a seductive manner toward attractive and powerful men. However,it’s closer to wanting attention and making people jealous than real flirting.

For these reasons she didn’t like having other attractive women, such as Foxfire, around.

Mink’s criminal career was dominated by the feeling that she was better than anybody else. She thus would always find a mean to get away with it – and soon come back for another caper.

“Shame on you, Nighty… never turn your back to the Mink !” 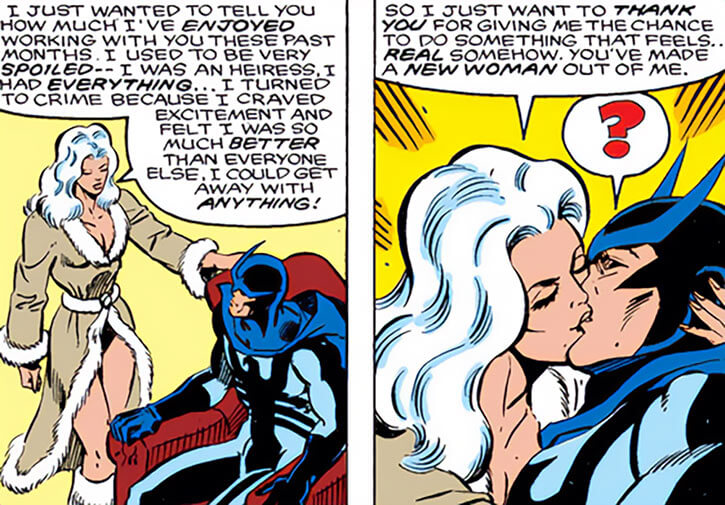 Prior to training with Nighthawk she lacked the Improved Throw Advantage.

As much of the writeup has been gisted from just a few appearances, her DCA stats have been generously estimated from the benchmarks in areas of demonstrated competence. Her Fighting was boosted one rank from the OMACS benchmarks to reflect her generally high prowess, despite lacking the Martial Artist skill per se. This is a cosmetic choice.

Her Dexterity was also boosted a Rank, as lacking a proper Weaponry skill or any sort of Vehicles, it was fairly low for a skilled thief with a powerful ranged attack.

The reason her Dexterity is not any higher is that she is one of the few characters in the Utopia book never seen operating any sort of vehicle. Given her background, it’s possible she never learned to drive herself. An alternative take on the character might have a Dexterity of 4 or so.

A previous version had the Takedown advantage. As she never demonstrated this capability in hand-to-hand, that Advantage has been removed.

Her Musk Spray has been given Multiattack as a better representation of her spreading attacks. A good roll will also boost the damage save to its reputed efficacy, although in general deployments of her spray have not been seen as exceptionally effective.

Writeup completed on the 1st of September, 2012.