Minnie-May is almost as obsessed with explosives as her associate Larry is with guns. And like Larry, she demonstrates an incredible level of skill with her weapons.

She usually works with smoke and concussion charges, and somehow carries a half-dozen grenades. If needed, she’ll break out actual demolition charges.

Her skills with explosives extend to the physics surrounding their use, and to split-second timing. For instance she once stood in the middle of a street and threw a grenade with the exact timing to have it explode underneath a speeding car. As a result, the car vaulted over the unmoving Minnie exactly like she knew it would.

She can also detect high explosives through sense of smell, including in circumstances that would challenge a trained dog.

Like Larry, Minnie prefers not to kill if possible. For instance if she traps a car, her charge will be shaped to destroy the engine block. Still, the passengers will likely have a major concussion and some minor wounds.

On the other hand, her use of explosives has more nods toward realism than in most super-hero comics. For instance her grenades can’t be used indoors and in narrow places like back alleys lest she be caught in the rebounding shockwave.

Though she goes for non-lethal whenever possible (her grenades do not normally produce any fragmentation and often have a toned-down warhead), Minnie-May has been known to deploy military-grade explosives when needed. This has included Munroe effect  anti-tank charges to take out empty armoured vehicles. Or shaped charges powerful enough to punch a man-sized hole through a thick reinforced wall. 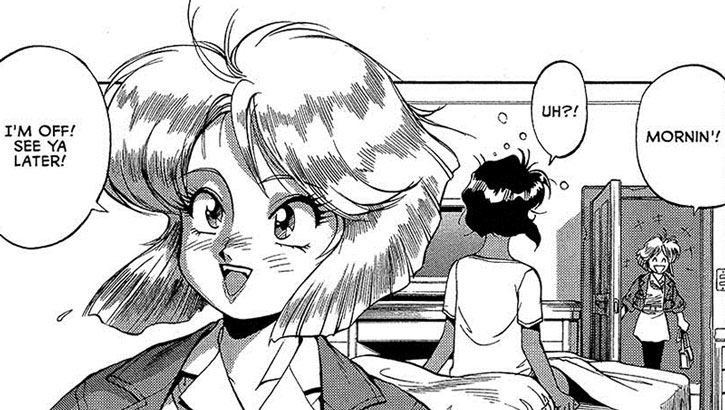 May knows some disguise artistry, but not to a professional level. It’s more a prolongation of her beauty and makeup skills that makes her conversant with wigs, use of foundation to change skin tone, restyling hair, etc. She apparently taught some basics to Larry.

May’s disguise skills will usually allow her and her allies to go incognito as far as casual observers are concerned, but will not fool experienced and trained criminals or police.

Her technical skills are centered around explosives, but modern demolitions are a vast field. For instance she knows a fair bit of radio engineering since she builds her own sophisticated remote detonators.

She once built a radiolocation device to track down a functioning cellphone in an area without much EM pollution.

Some more tea my poppet ?

Minnie uses herbal supplements to block her normal growth and remain child-sized. Her stated height would be average for a 10½ girl. This diminutive stature mean that she’s usually mistaken for a little girl at first glance. It also hinders her strength, running speed, etc.

It also makes her useless up close. When manhandled the best she can do is giggle. Even 9-year old children tend to assume that Minnie is but a few years older than they are, and a large 9-year old boy could probably beat Minnie up.

The growth-countering teas and concoctions were provided by Granny Hao, an expert in traditional Chinese medicine and narcotics. Ms. Hao is the pharmacist and drugs dealer of the brothel where Minnie used to work. With her vast esoteric knowledge, she has access to cinematic  and even borderline-comic-book drugs of the “ancient Chinese secret” variety.

As the series ends Minnie has reversed her treatment. Her body is reportedly growing and maturing faster than normal to catch up with her real age.

May usually carries several small explosive charges (perhaps Semtex-based) which she can use to trap and cripple even large cars or small trucks. She can place these charges with unbelievable alacrity. It takes less than a minute for a charge triggered by turning on the contact, or seconds for a simple timer-detonated charge.

Of course, Minnie can easily fit under most cars, which facilitates the operation. 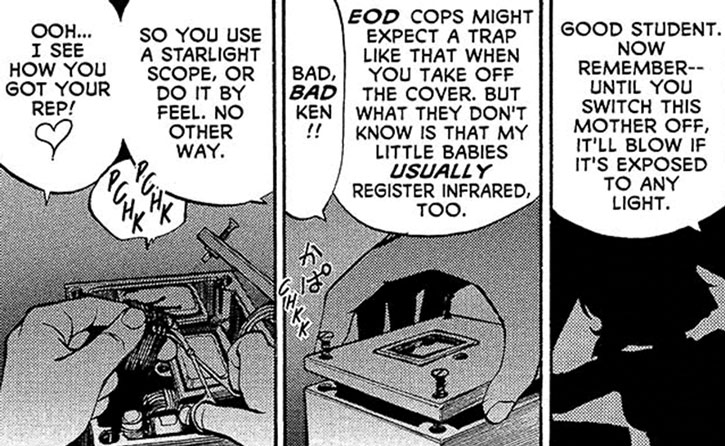 One of her shoes will have a concealed heel compartment with several small “doses” of plastique explosive — enough to blow up a few reinforced locks and the like — and two detonators.

Her *other* shoe likely will have a smoke charge concealed in the sole, with some sort of specialty detonator. This smoke is hot pink, which is used by roughly nobody else on Earth and thus good for signalling.

Minnie can improvise low-grade explosives from most kitchens or broom closets. Though these quick bits of chemistry don’t have much power, she’s also good at surrounding them with ad-hoc payload such as ground glass or black pepper.

Minnie fittingly drives a subcompact – an older Fiat 500, possibly the 1968 F series, with a MEY-117 vanity plate. There’s also some supplies in Larry’s Cobra for when Minnie has to drive it – a big seat cushion, and tin cans she can duct-tape onto the pedals.

When she needs to pack, she’ll have a MkIII Colt Lawman with 2” barrel, presumably in .38. This is apparently one of Larry’s guns. She also carries a small collapsible telescope.

May was a runaway child from Chicago’s Cabrini-Green area . The criminal bomb expert Ken Takizawa found her sleeping in his car, and sort of adopted her as an apprentice.

Early on May pretended that she was a boy out of caution, but revealed that she was a girl after developing a crush on Ken. Several years later they ran afoul of the mob and were separated as they fled.

Minnie hid in the backyard of a high-end brothel in Chicago’s Chinatown, the Purple Pussy. The Hong Kong mobsters running the place took her in and she worked as a maid. But by age 15 she decided to join the prostitutes.

According to Minnie, the pay was good and the girls were treated right, to maintain the classy atmosphere.

After about a year and a half, she figured that the heat had passed – especially given the secrecy and security of the brothel.

In unknown circumstances she met the bounty hunter Larry Vincent. Ms. Vincent took her in as her assistant at her gun shop, and eventually as a business partner both for the shop and for her bounty hunting activities.

All you need is love

A few months later, May was reunited with Ken, and was now old enough to become his lover. However, Takizawa had developed multiple sclerosis  that made demolitions too dangerous, and wanted to go straight.

After much sex, Minnie helped Ken defuse a huge bomb that the mob had forced him to build. Meanwhile, their allies Larry Vincent and Bean Bandit took out the mobsters. However, Ken’s paymaster miraculously survived Larry’s gunfire. Thus, Ken decided to disappear rather than turn May and her friend into targets.

Both Minnie and the mob located Ken anew in L.A., but he had arranged for a series of tricks to convincingly fake his death. He then received plastic surgery and retired close to his girlfriend May in Chicago. Ken has occasionally assisted Larry and Minnie in their bounty hunting endeavours.

Near the end of the series, Minnie convinced Ken to marry her. She became pregnant and stopped her special herbal treatment so her body would resume its normal growth and withstand a pregnancy.

Minnie usually dresses sharp and business casual. But she can easily pass for a 13-year old by just wearing appropriate clothes and acting a bit.

Minnie is a happy-go-lucky, hedonistic kinda gal who’s chiefly interested in action, sex, food and money. She tends to act like an impulsive, immature, over-cute child who’d do anything for a thrill. She can have a temper, especially when she’s drunk.

Though she’s irresponsible she’s also a good friend. May will always forgive her friends after a fight, even in those cases where she wasn’t at fault. 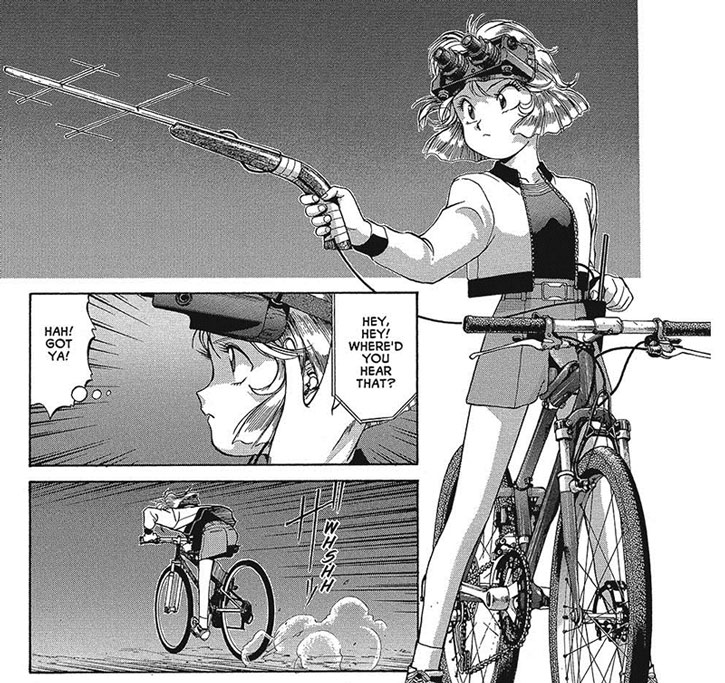 Over the course of the series she matures and becomes much more emotionally stable, though she keeps her child-like, “cute” mannerisms. She also becomes increasingly uncomfortable with most people not realising that she’s aged 19+.

Hopkins tends to treat everything as a childish game, even when she’s being threatened. Curiously, she becomes serious when it’s her friends who are being threatened or hurt. Her room looks like that of a little girl’s, complete with a favourite plushie – and she sometimes makes faces at her opponents.

Minnie’s sex drive has a lot of horsepower. She’s sexually voracious. Being a brothel girl was something she enjoyed though she eventually decided to move on. She’s completely gaga about Ken, and becoming his lover was her major life goal for years.

Once she was reunited with him, she was obsessed with cramming as much sex as possible in their life and eventually wedding him.

Minnie is indifferent about having been an underage prostitute specialising in paedophiles. Perhaps this is because she lives in a genre where having sex with schoolgirls is a common male obsession. However, she had a curiously old-fashioned hang-up about whether Ken would consider her a “soiled dove” due to her brothel life.

Apparently, her odd scheme to remain child-sized was meant to remain just like she was when Takisawa had to flee, to match his fetish preferences. 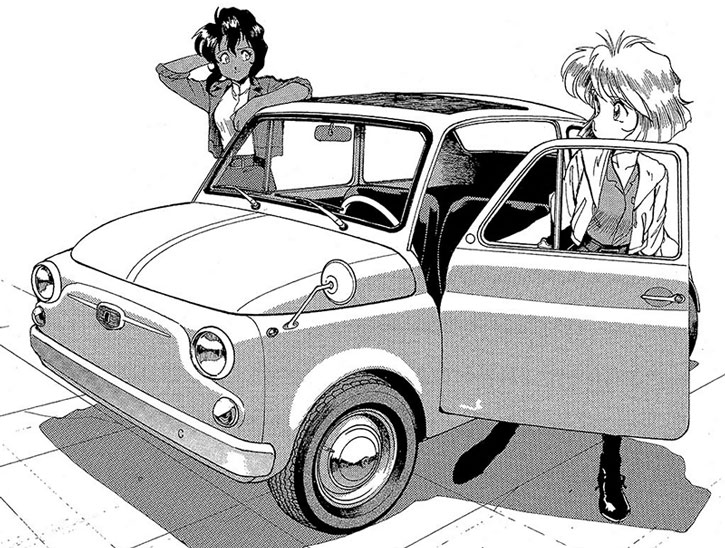 Minnie’s relationship with explosives has definitive sexual undertones. But these are much less pronounced than Larry’s. Whereas Larry is repressed and in denial, it seems that Minnie just gets aroused by explosions because she associates them with Ken Takizawa.

Hopkins tends to put pineapple sauce on most everything she cooks.

(Lovingly selecting a grenade) “Two-second fuse, H.E., frag… sounds about right.” (kisses her grenade for luck) “Do a good job my baby !”

“Three poppers under the truck’s right tyre ! BOMBS AWAY !”

(Finishing a bandage) “There you are — one bad ol‘ ouchie aww better !”

Minnie-May (yelling enthusiastically through Larry’s in-ear phone receiver): “YOO-HOO LISTENERS ! IT’S MINNIE-MAY’S INFO CORNER ! The pigeons are chasing the decoy ! Watch out for the guy with the hat, just entering the bank.”
Larry (reeling from the sudden shout in her ear and cursing under her breath): “That nitwit…”

Bonuses and Limitations:
Gadgetry can only be used for realistic demolitions-related work, but that includes working with timers, radio detonators, computer-piloted detonators, tamper-proofing sensors, imaging equipment and other EOD stuff… – a surprisingly broad range of technical fields.

Drawbacks:
Age (Young), “Attack Vulnerability” (her AV is lowered by 1 CS to detect people sneaking up on her). 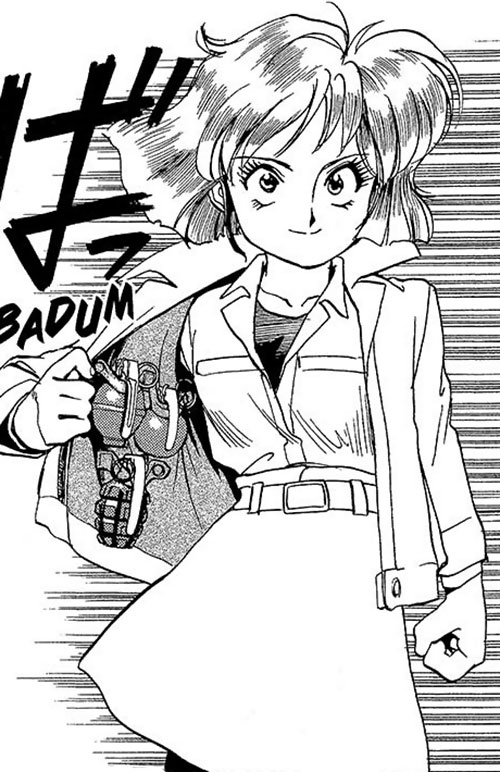 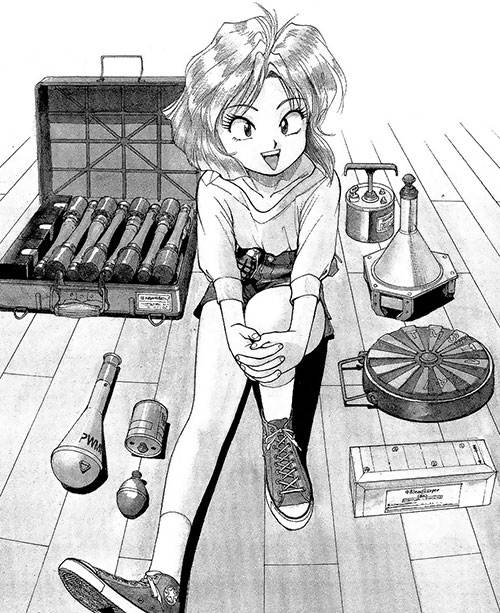 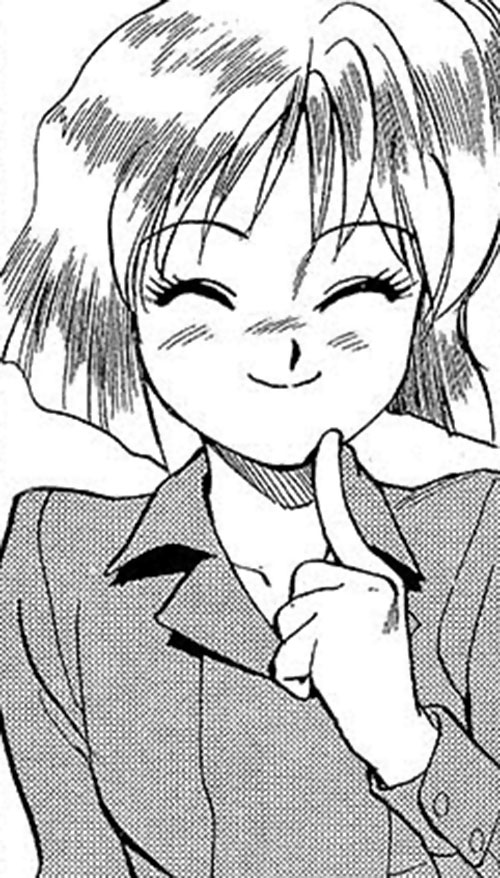 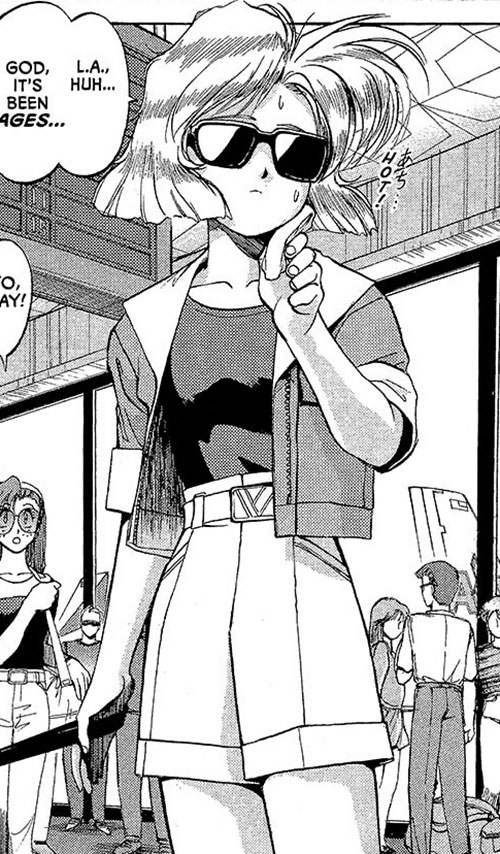 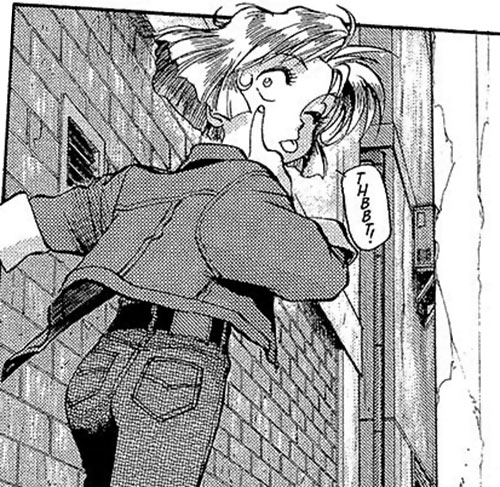 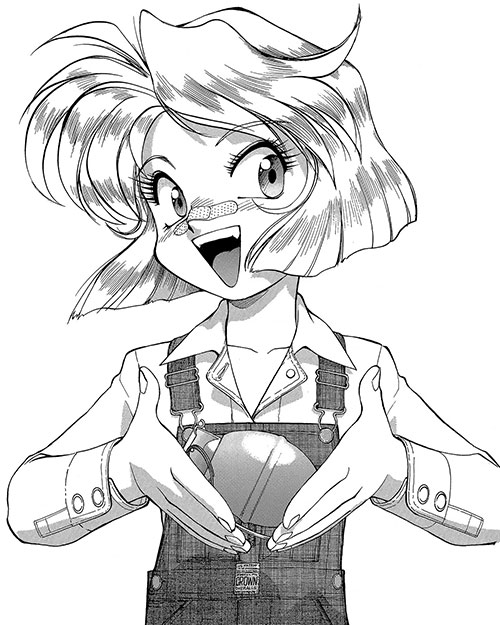 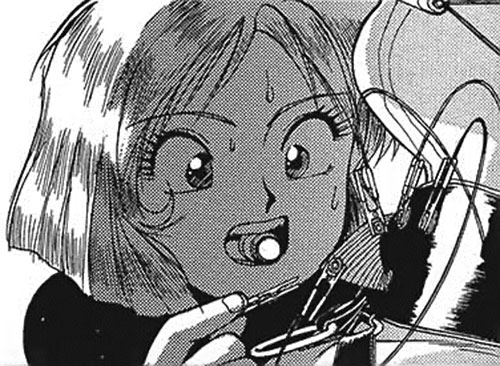 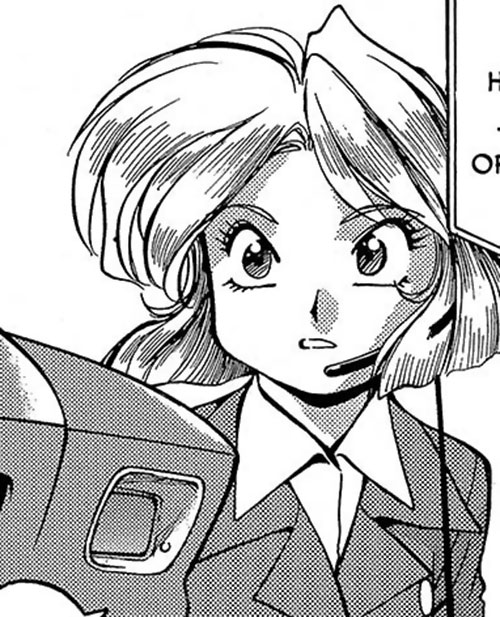