Minute-Man is a typical Golden Age  super-hero, who first appeared in 1941. He was a Fawcett Comics character, which means he was eventually acquired by DC Comics. See our ages of DC Comics article for more.

The following are quick, very old notes. They date back to a time before lines of hardback reprints, scanned microfiches or digital reissues. Mostly, they capitalised on scattered reprints, and the World at War sourcebook for the DC Heroes RPG having established neat ballparks for Golden Age characters.

His only “power” was the Superspeed that seemed to be in evidence in his appearance in Shazam ! There, the only instances that were seen included :

I don’t know anything special about his Golden Age history, including his origin. His usual modus operandi was to have General Milton give Private Jack Weston a leave of absence so that Minuteman could adventure.

He wears a shirt with red and white stripes, except the sleeves which are blue with white stars. His belt has stars on it and his belt buckle has an M on it. His pants are red.

His costume has a blue mask, though originally, he was maskless.

He’s sometimes cocky and head strong, taking on more than he should, but that’s to be expected of Minuteman, the One Man Army.

“Wait a minute for Minuteman !”

Bonuses and Limitations:
Superspeed only functions in the pre-Crisis Silver Age (it is not factored into the above Initiative). 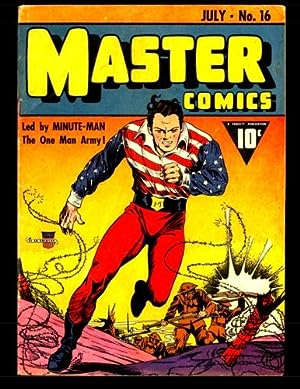