Moonstar’s abilities have gone through more changes than about any other person’s in the Marvel Universe, and has gone thru four distinct phases (see X-Force #99 & 100 for details). This profile focuses on her Mirage/Valkyrie phase.

Moonstar (or “Mirage”, as she was known at this point) could scan the minds of others, to find their greatest fear or hearts’ desire. She’d also learned to scan for other mental images or even images from her own mind. She could then project them as real-seeming holograms of psychic energy.

Mirage could project these with sufficient mental force to cause extreme fear reactions in subjects up to and including unconsciousness. 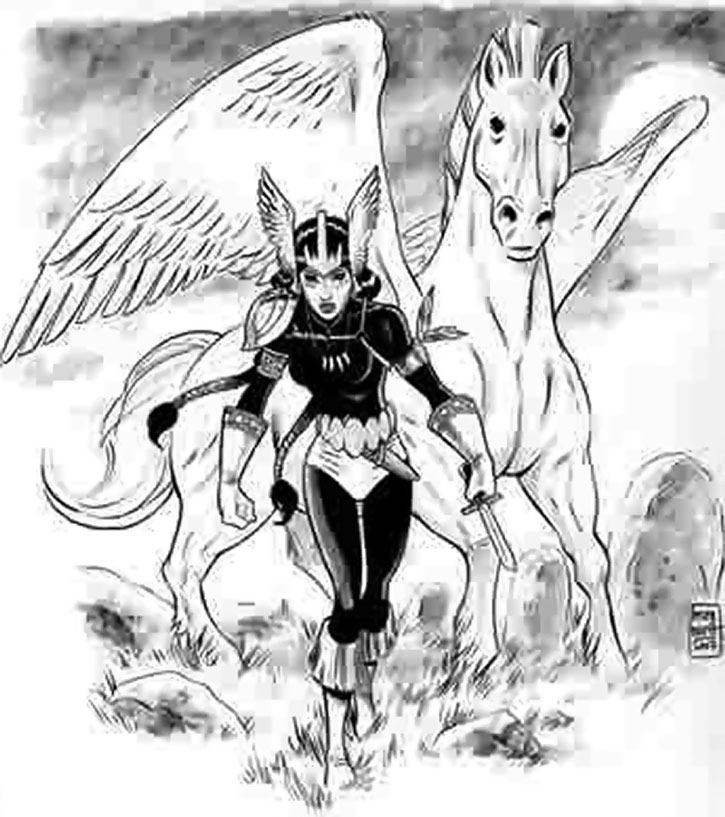 Mirage also possesses an animal telepathy power. It allows her to share thoughts and feelings with higher forms of non-sentient life such as birds and mammals.

During this time, after being inducted into the ranks of Odin’s Valkyries, Mirage was gifted with the ability to discern approaching Death. If she so chose, she could actively resist it, refusing to allow those at death’s door to cross over. This was usually part of a subplot, and is more related to Death being a literal being in the Marvel Universe.

Continued from the Moonstar (Psyche) writeup:
Moonstar and the New Mutants were kidnapped and taken to Asgard, the otherdimensional  home of the Norse gods. While she was there, Dani rescued a winged horse from a group of hunters. Mirage had an immediate psychic rapport with the horse, which she named Brightwind after her pony on Earth. The horse selected her to be his rider.

Another woman, riding a similar horse, passed by and invited Dani to join her sisters. After some time inside their base, Dani sensed that the female warriors were keeping something from her. Thus, she left to search for her teammates.

Strangely, wherever she asked for them, people turned away from her in fear. Only when the New Mutants and the X-Men encountered Asgard ’s death goddess, Hela, in battle, Dani’s new status was explained.

Brightwind was one of the herd of flying horses belonging to Odin, ruler of Asgard. These are ridden by his female warriors, the Valkyries, who guide the spirits of the recently deceased to the Afterlife. The bonding between Moonstar and Brightwind bestowed part of the Odinpower upon her and she thus became endowed with the Valkyries’ power.

As a Valkyrie (or Valkyrior), Danielle could now perceive the coming of death in the form of a mark on those individuals about to die. When Moonstar and the others were returned to Earth, Brightwind accompanied her.

Upon her return, Moonstar felt lost. She learned Professor Xavier was not returning to the school and Magneto was the new headmaster.

Furthermore, during the second Secret Wars , Moonstar was killed along with the other New Mutants. This came after she witnessed death marks on her friends and then watched the Beyonder kill them.

The alien was annoyed by the New Mutants having refused his gift to make everything perfect. As they no longer did fit into his world order, they had to be removed. He did not settle with killing them, but erased them from ever having existed. Neither the X-Men nor their friends and families would remember them.

Determined to become human himself, the Beyonder created a machine to recreate his essence. For a test run, he used the New Mutants’ remains. The machine indeed recreated the young mutants’ bodies. However, they were almost zombies, lacking any emotions or happiness.

Once the Beyonder was defeated by assembled heroes, Magneto was puzzled how to get his young charges out of their lethargy. Danielle’s faith was restored in herself through a visit from Thor in the guise of a frog – a form he had been trapped in by Loki. Her animal rapport allowed a communication between her and the Asgardian Avenger. Howbeit, the other New Mutants were not restored so easily.

Magneto found no way to reach his students. He finally agreed to the New Mutants being transferred to the Massachusetts Academy, hoping that the White Queen (Emma Frost) could use her telepathy to cure the young students. Moonstar, however, refused. Angry with Magneto about giving up that easy, she chose to go home to her parents in Colorado.

While there, Moonstar ran into a former friend, Pat Roberts. As children and teenagers, they had been close, almost in love. However one day, while Dani was having dinner with his family they got into an argument during which her powers manifested. Accidentally, she showed everyone present Pat’s greatest desire and fear and she ran away.

They never had the chance to talk it out and, now, Pat was angry at her. He insulted her in front of his friends and she had no idea what to make of it, especially as a death image hovered over him. When Pat was injured and stuck in a blizzard, Moonstar fought Death in the form of an old gunfighter, trying to save her childhood friend.

She did the impossible and drove Death away but, the next day, Death returned in the form of an old Indian woman who convinced her to let him go.

Return of the New Mutants

During her absence, Magneto realized he had been manipulated by Empath into transferring the New Mutants. He confronted Emma Frost. Mind probes determined that the team wished to return with Magneto, yet friends with the Hellions. Once her teammates were back where they belonged, Dani too rejoined the school.

In the following months, some members of the New Mutants left and one even died. But Mirage remained a mainstay of the group and continued to co-lead with Cannonball.

Moonstar continues to use her basic New Mutants uniform with its Native American accents. However she has added some unusual Asgardian motifs as well, including a metallic headdress, and bits of armor.

See the Moonstar writeup, as Dani’s personality doesn’t change much during these years.

Asgardian: “You children — explain yourselves !”
Mirage (calmly): “We’re minding our own business. I suggest you do the same.”
(Asgardians nervously withdraw)
Sunspot (thinking): “She cowed them— Warriors of Asgard— with a look. What do they see in Danielle that I cannot ?”

“Huh ?! A spirit-face… Looming over Wolverine ! What the heck is going on ?!? None of the others saw anything, only me. I feel so cold inside too, as if my heart’s just turned to ice. Something awful’s going to happen, I know it — but how ? What ?! Can I stop it ? Am I part of it ? Every time I turn around, I come face-to-face with a new mystery— And I don’t like it one little bit !”

Dani’s somewhat unusual combination of Powers deserves some clarification. The Combined Powers Bonus is a list invention and may be a tad confusing to people not used to it.

Basically, Dani in this incarnation has two different attacks: she may pull images of a target or targets’ greatest fear or desire from their minds (either Mind Probe or Phobia, at her choice). She rolls for this attack, then applies the RAP’s earned to the Illusion Power as well, which will determine how “realistic” the Illusion is to those seeing it.

At this point in her career, she has less difficulty pulling other sorts of images from people’s minds. GM’s should still be ready to apply a diffculty penalty from the Universal Modifiers table to any attempt to procure an image that does not have a strong emotional attachment to it, but such adjustments should be less strict as long as there is *any* emotional attatchement at all.

Images that have no emotional significance for a target (such as a projection of a neutral memory) should suffer no more than a +1 CS to OV/RV.

Dani’s images often seemed real and tangible when fighting Death and typically conformed her own self-image to something similar to the image Death came in – for example, illusory images of pistols appearing when Death came in the form of a gunfighter, allowing her to battle Death on his/her/its own terms.

All of this would not be played, but rather roleplayed, but the scene itself should be played out in detail, with Dani struggling valiantly to deny its prize (or not… she has in the past chosen to allow Death its victim for various reasons).

If the player or the GM insist on a mechanic for determining whether or not she *can* stave off Death (remember that in the Marvel Universe Death is a person of cosmic power and significance), Dani can have a specialized form of Leadership allowing her to pay her own HP for a Desperation Recovery even if the other person has already done it and failed, and even if the person is at negative Body.

Success on the check indicates Dani can successfully keep Death away.

Bonuses and Limitations
Danger Sense also applies to danger to the usual rider, with a +10 Special Range Bonus if the rider is not close to Brightwind when in danger.

Brightwind is a mystical steed of the Valkryior, bred to carry Odin’s Choosers of the Slain in their missions to collect the dead of Asgard and bring their souls to Valhalla.

Brightwind has a deep connection to Dani, even sensing when she is in Danger or being attacked. He is a fierce fighter, able to quickly reduce a Jeep to parts and junk with a few kicks. He is strong enough to carry at least four of the New Mutants with no difficulty, and swift enough to reach Manhattan from Xavier’s in minutes. 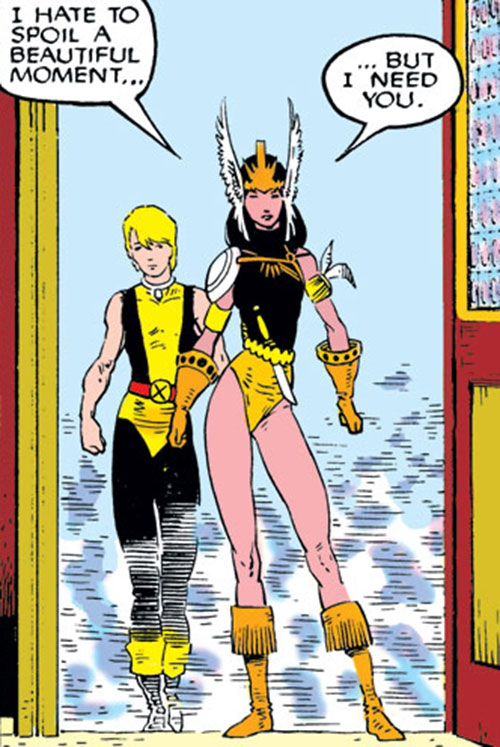 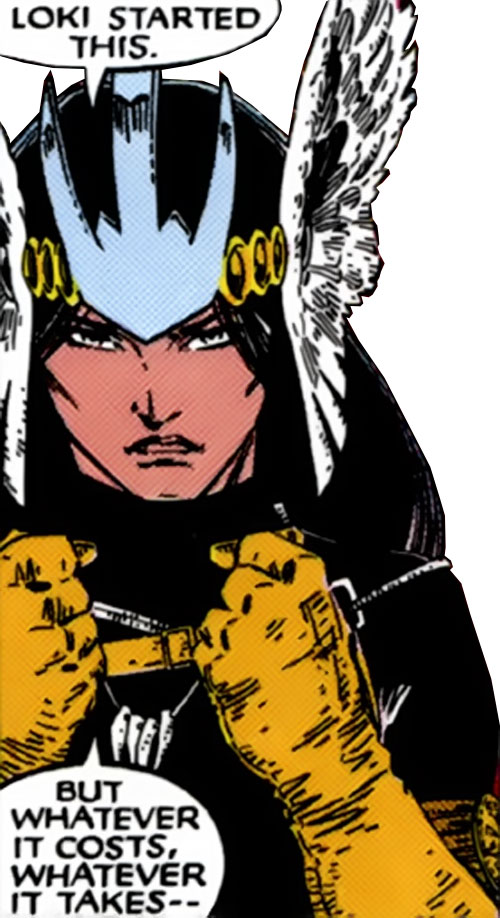 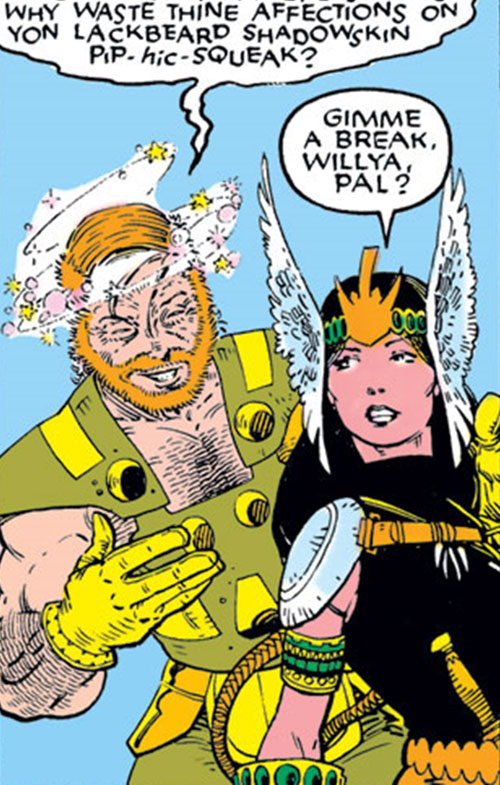 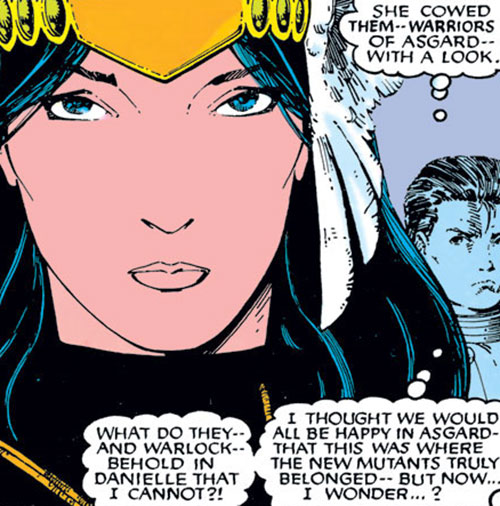