All of Mirage’s powers are derived from his reinforced costume. A powerful holographic device is built into it.

It is capable of bending light for many purposes. With the costume he can alter his own and his men’s true appearances. He’ll also routinely use an illusion so that he appears to be somewhere else than what he really is.

Mirage can also create multiple images of him so that the real form is hard to detect.

So powerful are the illusions that not even Spider-Man (Peter Parker)’s spider sense can differ between real and illusion. The enemies thus cloaked often seemed to teleport — in to attack, out to dodge — though it was actually a matter of invisibility and diffraction.

It is thus natural to assume that Mirage is a teleporter or even time manipulator, and adopt inappropriate tactics.

Desmond Charne himself is a master holography technician. He developed his costume himself.

Although no master, he’s quite adept at physical fighting, hitting unusually hard. Mirage often attacks his foes by hand-to-hand attacks or by the use of a gun.

During his crime tours, the Mirage travels around with his own gang of thugs. These are clad in a version of the Mirage costume.

The man who would become the Mirage, Desmond Charne, used to be a holography technician. Charne admired Spider-Man, and wanted to become better than him. Thus he designed a powerful costume, gathered a gang of criminals and became a super-villain.

Mirage attempted to rob multiple weddings at the Morgan Hotel in Laverne. However, one of the weddings was that of Ned Leeds and Betty Brant, with Parker as a guest. Spider-Man quickly defeated Mirage’s underlings, but literally couldn’t touch Mirage himself. Mirage beat Spidey up, disappointed at how easy it was.

However, Spider-Man then realised how Mirage’s powers worked. Since he couldn’t pinpoint Mirage’s true position, he brought down an enormous crystalline chandelier for an area-of-effect attack. This took Charne out. Mirage ended up in jail.

Charne continued to be a super-villain, but a D-list one at best.

In 1986, Mirage received an invitation by the criminal underworld to the Bar with No Name. The meeting was to discuss the lethal threat of the vigilante known as the Scourge of the Underworld.

However, the bartender was the Scourge in disguise. He unexpectedly machine-gunned the room, killing all criminals in attendance.

Captain America (Steve Rogers) disguised himself as the Mirage. His goal to convince the Scourge that someone from the bar had survived in an attempt to trap him. Scourge fell for the trick and was caught. But he was killed by another Scourge before he could reveal anything.

Desmond Charne’s self-confidence is such as to constitute delusions of grandeur. He believes himself to be invincible and untouchable due to his costume and genius. Thus, he always toys with his opponents instead of defeating them as soon as possible.

He also really enjoys to talk and taunt during combat, and might distract himself in so doing. When not fighting the Mirage stands and gloats.

Mirage commits crimes to affirm that he is “the best”.

“You may easily have defeated my underlings, but it won’t be as easy to combat the Mirage !”

Mindboggler or DCU’s Mirage are good choices for rivals – given Charne’s ego, he would see other illusionists as such. Perhaps the two, complete with their own gangs and all, could have a showdown to see who is the best illusionist and criminal.

Otherwise, Mirage would likewise be a Blue Beetle villain.

Equipment: Costume [/BODY/ 05, Illusion: 09, Invisibility: 09, Bonuses: Illusion has Area Effect, Illusion effectively neutralizes Spider-Man’s Spider sense. Limitations : Illusion may only be used for disguising appearances and creating multiple false images of himself.
Notes : Mirage always puts up an illusion of himself while he remains near the illusion in invisible form. When the illusion is attacked he disappears to reappear at another position giving him an effect resembling teleportation. After this he will also appear forth from seemingly nowhere to attack his enemies giving him the equivalent of a ’Blindside Attack‘.]

By Peter S Piispanen aka The Angel 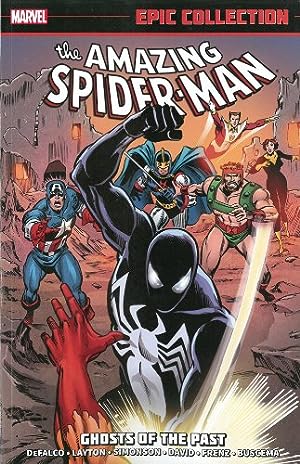 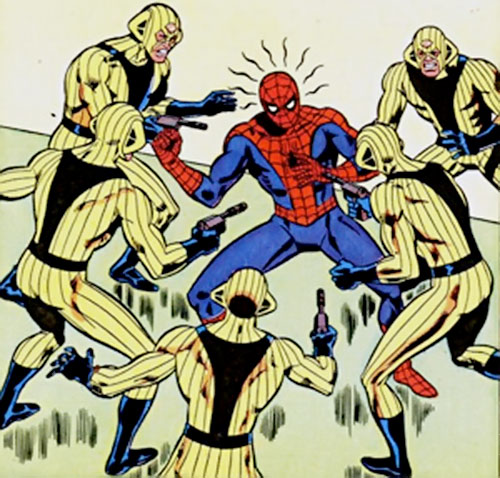