As an accomplished mercenary, McCulloch is a competent combatant. He is accomplished in the use of weapons, particularly firearms and mirror tech weapons.

He has developed a good knowledge of Gadgetry, particularly when it comes to Scudder’s mirror tech, which McCulloch has developed even further.

His mirror gun can fire a beam of solar energy at a target, can fire a beam which transforms targets into figures made of glass, and turn them back again. He can even use it to cause a reflective surface to replay the events it has witnessed in the past day. The gun may also have a number of Omni-Gadgets  built into it.

He has a number of mirror tech devices which he commonly employs which allow him to perform a range of tricks.

Mirror Master can travel to distinctive dimensions, which he uses as assets. Examples include :

Born to a young couple who were unable to cope with being parents, Evan was left on the doorstep of an orphanage in Kirkcaldy, run by Mrs. McCulloch, with a picture of them. The orphanage was a happy place, except for Georgie, who would drag the smaller children away at night, and abuse them, keeping them too afraid to tell on him.

When he was 8, it was Evan’s turn, and Georgie took him out to a nearby stream. While he initially found himself unable to resist, when Georgie got too close to him, something in Evan changed, he grabbed a stone, knocked Georgie into the stream, and held him under till he drowned.

Evan left the orphanage at age 16. He fell into a life of crime, discovering that he had a talent for solving other people’s problems. He soon became one of the top professional killers in the UK.

One day he cockily agreed to do two jobs in London in the same day. The first target fought back more than he expected, and injured one of his eyes. For the second target, he was given a time and a place where he regularly ate lunch. Despite his injury he shot the target, despite feeling that the man seemed familiar. It was only after shooting that he recognised the man as being his father.

After killing his employer, a business rival of his father, Evan observed his father’s funeral, and first saw his mother. He followed her back to her house, and watched her for a few weeks, until he worked up the nerve to talk to her.

Unable to get an answer at the door he broke in, and found that his mother had committed suicide, unable to cope with the loss of her husband. McCulloch spent 12 hours staring into her bathroom mirror.

Soon after returning to his lodgings, agents of the American government stormed in, abducting him and taking him to America. He had become an annoyance to them by killing too many of their agents. They offered him a way to make up for this by infiltrating the super-villain community for them. He agreed, and they provided him with the equipment of the original Mirror Master, Sam Scudder. 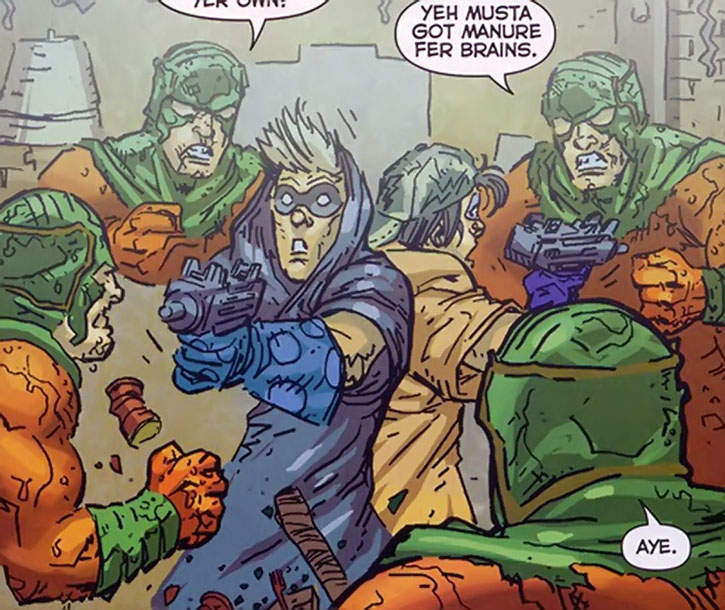 His first assignment for them was to try and intimidate Animal Man into abandoning his animal rights activism. His attack didn’t succeed in dissuading Animal Man, and Evan soon got tired of his superiors, and banished them to a mirror dimension.

While following Sam Scudders research, Evan found The Mirror Dimension. This dimension is filled with mirrors which allowed him to see through all reflective surfaces on the planet.

While continuing his super-criminal career, Evan, out of costume, met and fell in love with Emelia. Once she learned about his other identity, however, she turned him in to the police, and even testified against him. He soon escaped and began hunting her. But she had changed her name and hidden in a house with no reflective surfaces, which she was too afraid to leave.

Mirror Master pulled the Flash into The Mirror Dimension, imprisoning him until he did a favour. Evan told him that he and Emelia had fallen in love, but that she had died. He claimed that he had caught a brief glimpse of her exact double, which he had recorded on a mirror, but was then unable to find again.

He claimed that he wanted to talk to her, so that he could make peace with Emelia, but that searching through all the mirrors in the Mirror Dimension would take too long for him. So he needed Flash to do it for him.

Instead, the Flash got Linda Park, his girlfriend, to check with Oracle, based on details in the background of the image Mirror Master had. She managed to track the woman down. Linda and Impulse, went to see the woman, but discovered that she was actually Emelia.

Mirror Master used the reflective surface of Impulse’s glasses to travel there, imprisoning Impulse with the Flash. Flash destroyed all the mirrors in the dimension, revealing the exit. They escaped, and managed to subdue the Mirror Master, sending him to prison.

Mirror Master, along with fellow Rogues Captain Cold, Captain Boomerang, Heatwave and the Weather Wizard, accepted a deal with Neron. Brokered by Abra Kadabra, it was meant to improve their standing as villains, and finally get some respect.

Kadabra sent Mirror Master to destroy an oil field. But the resulting explosion was larger than McCulloch had expected, and resulted in his death. The same happened to the other Rogues.

Shortly after Nerons plan was foiled, the bodies of the dead Rogues, with increased powers, rampaged through Keystone. While the JLA battled them, the Flash travelled to Neron’s realm. The scarlet speedster  eventually managed to trick Neron into stopping the rampage and return the Rogues to life.

Mirror Master was then recruited into Lex Luthor’s Injustice Gang, as they moved against the JLA. Working with Dr. Light, Mirror Master helped create hard-light hologram versions of the JLA. They sent those to cause mass destruction, first in Star City, and then around the world.

Unhappy with the amount of destruction being caused, especially after his recent stay in Hell, Mirror Master was open to being paid by Batman, with the money going to the * Orphanage Restoration Fund, to betray the Injustice Gang. After the Injustice Gang’s defeat he helped Luthor escape. He then settled down to regular crimes, and bothering the Flash.

After he and Captain Cold broke out of custody, while being transferred through Metropolis, they were aided in their escape by Brother Grimm. Grimm enlisted their help in a plot to get rid of the Flash. Captain Cold drew Flash out in public so that Mirror Master could transport him to a mirror dimension where there was no Speed Force.

When the three returned to the real world they discovered that Keystone was missing. Using his mirrors, Mirror Master discovered that Brother Grimm had abducted it to his own dimension, using the mirror tech as a focus. Cold and Mirror Master, wanting revenge on Grimm, accompanied Flash to Grimm’s dimension, where they helped him defeat Grimm and return Keystone to it’s proper location.

Mirror Master was soon recruited by Blacksmith into joining her Rogues, and took part in their attempt to take control of Keystone. Mirror Master contributed his technology to create a reflective field around Keystone, preventing the outside world from realising that anything had changed there.

When this operation failed, he managed, with help from Captain Cold, to escape with Weather Wizard and the new Trickster. They formed a new version of the Rogues, under Captain Cold’s leadership.

They began working together on crimes more, and became more successful as a result. But their success drew more attention of the government. FBI agent James Jesse (the former Trickster) thus came to head a task force to bring them in. He gathered other reformed rogues, Heatwave, Pied Piper and Magenta to work with him.

During this time as part of the Rogues, Mirror Master developed a drug addiction. Captain Cold helped him work through it (by basically hitting him till he stopped).

When Captain Boomerang was killed, his body was taken by the government. They had the technology to revive him temporarily, in order to get information to help Agent Jesse’s task force catch the Rogues. The Rogues adopted Boomerang’s newfound son, who now called himself Captain Boomerang, and agreed to help him recover his father’s body.

At the same time the Top had assembled his own Rogues, comprised of Plunder, Tar Pit, Girder, Murmur, and Doubledown, in opposition to Captain Cold’s group. Jesse’s group of reformed Rogues discovered the location of the hideout used by Cold’s gang, and attacked it.

The battle spilled out onto the streets of Keystone, and the Flash soon got involved. Partway through the battle the Top arrived with his group, and they joined in.

While the battle raged on, some of the Rogues found out where Captain Boomerang I’s body was being held. This drew Zoom into the battle, and he dispatched the Rogues before turning his attention to the Flash. Mirror Master managed to escape and take the rest of the Rogues with him.

They buried Captain Boomerang I’s body in Avernus, an extra-dimensional graveyard for fallen Rogues. The Rogues then joined Luthor’s Society.

Since the death of his parents, Evan has been avoiding real life, submerging himself in the unreality of the super-villain lifestyle, or escaping into drugs. The one time he started to develop a relationship with a normal person, Emelia, he became too possessive and drove her away.

Evan enjoys being a super-villain, and happily goads heroes who are unable to get at him. While he does have a certain sentimentality, and prefers not to attack women or children, he has no compunction against killing. He anonymously sends a portion of takings from his jobs back to the orphanage where he was raised.

In combat, he prefers to avoid direct confrontation with his enemies. He sends duplicates to confuse them while he watches from a mirror. As part of the Rogues, he mainly serves as support to the others, and they tend to make sure he can get away, since he’s their main route out of prison if they are caught.

“By the way, big man. I didn’t save up for the shiny toys and the fancy dress for a laugh, y‘know. The name’s Mirror Master awright ? Mind now ?”

“I’ll leave you to reflect on that for a wee while.”

“Aye, right. Fair enough. Just don’t kill them all till I’ve got back the money they owe me.”

“I can use a mirror a thousand diff’rent ways. Can turn a man inside out. Cut a hole through a seven-foot concrete wall. Make ye see things from yer fantasies, or from yer nightmares. They laugh at us. At me. Bein’ the Mirror Master. ‘Cause they don’t see. They don’t look inta the mirror with honesty at ’emselves. Everyone needs an escape. An escape from the sins a‘ yer past. And the sins a‘ yer future. The real world’s… just not for me. Spat on my life and twisted it around. Made me inta somethin’ I didn’ choose ta be. I ain’t ever goin’ back. I ain’t ever leavin’ wonderland.”

Most of his regular Mirror Tech I’ve included into a Mirror tech suit, since it isn’t clear whether they are in separate gadgets or not.

Here are some example Omni-Gadgets used by the Mirror Master:

Mirror Monster from the Mirror Dimensions 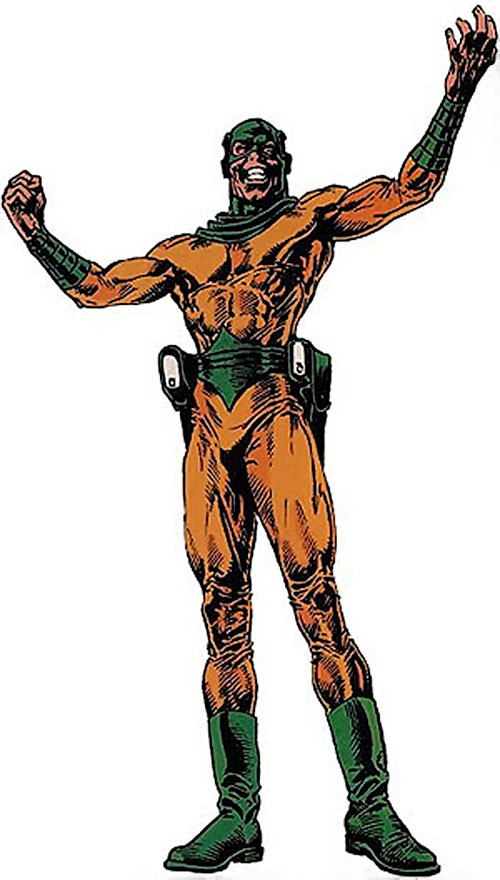 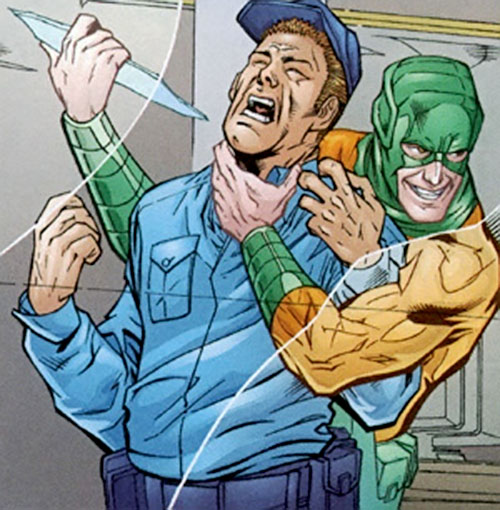 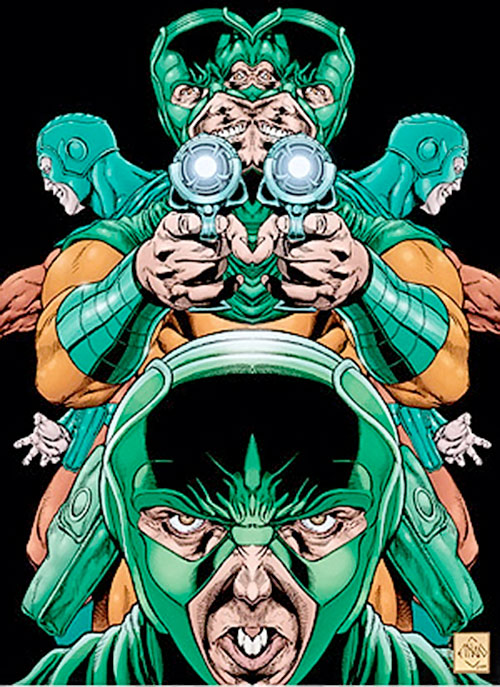