This profile only covers the events found in the Mage: The Hero Discovered series. Also, we recommend reading the Kevin Matchstick character profile first.

Mirth is the World Mage. With an effort of will, he can utilize the energies of the Faery realm for a variety of mystical effects. In the past, he has used this power to:

Despite its utility, Mirth’s magic is supportive in nature. Using it offensively leaves him debilitated for a period of time.

Outside of his mystical might, Mirth periodically experiences prophetic visions of unerring accuracy. Though they stricken him with pain, the visions show him future events that are linked to the “Struggle.”

Mirth’s legs have both undergone a transfemoral amputation. Mirth circumvents his disability through the use of magical prosthetics. The prosthetics are simple strips of white cloth that he shapes into legs with his magic.

Mirth was sitting patiently on a sidewalk when Kevin Matchstick first crossed his path.

Kevin, who wasn’t paying attention, stumbled into the waiting mage. He apologized and then engaged Mirth in a philosophical discussion before moving on and encountering his first Grackleflint.

By the time Kevin returned home after his brief scuffle, Mirth was sitting in his living room waiting for him. Unperturbed by Mirth’s appearance, Kevin joined him in the room and took a seat.

Mirth then revealed to Kevin that he was a Hero and was fated to battle a mystical creature known as the Umbra Sprite. When Kevin initially expressed his disbelief, Mirth performed several minor demonstrations of his own magical powers before simply disappearing in thin air.

Mirth next appeared after Kevin survived getting run over by a subway car. The two talked in a small café. There Mirth further explained the limits of Kevin’s new found powers and the Struggle in which he had been drafted to fight. He told him the story of the Fisher King and what would happen to the world if the Umbra Sprite found him first.

From that point forward, Mirth acted as Kevin’s guide and mentor in his adventures. He led him to Edsel, the girl with the magic baseball bat, and to Sean Knight the ghost. On each leg of their journey, the quartet were attacked by another of the Umbra Sprite’s creatures.

Puzzled as to how the Sprite was able to find them, the group captured one of his Grackleflints and interrogated him. Through a clever use of force, they made him reveal that Mirth’s power itself was acting like a beacon for the Umbra Sprites magic. Left with little choice, Mirth abandoned Kevin and his allies for the Faerie realms in order to hide their location from the Sprite.

Mirth remained in the Faerie realms for several weeks before being summoned back to the mortal dimension by Edsel. While he was absent, Kevin had been fatally poisoned and Sean had been killed while protecting him from Crumm Cruinch, the Dragon of the mists.

The Sword is Drawn

Mirth spirited Kevin back to the Faerie realms with Edsel. Once there, he used the magic inherent to the lands there to cure Kevin’s poisoning. The trio returned to the mortal realm a year later, fully prepared to storm the Umbra Sprite’s lair. Unfortunately, they were immediately ambushed by one of the Umbra Sprites mortal agents who wounded both Mirth and Edsel. 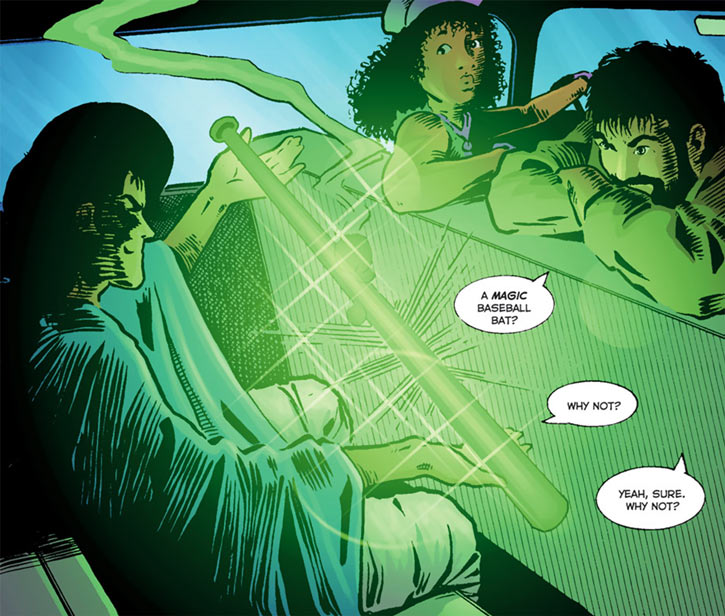 Even as Edsel fell, Kevin caught her bat and unleashed his true power. After smiting the Umbra Sprite’s agent, Mirth and Edsel revealed to Kevin that he was the reincarnation of Arthur Pendragon, and that Mirth himself had once been known as Merlin. After Edsel’s wounds eventually claimed her life, Mirth opened a gateway into the Umbra Sprite’s lair through which Kevin entered.

Kevin used the full extent of his unleashed might to destroy the Umbra Sprite’s minions. Before long the Umbra Sprite’s lair collapsed beneath his power. When last seen, Mirth and Kevin where driving into the sunset in Edsel’s Edsel , seeking further adventure.

Mirth is a short, thin man with a wirey build. Initially, he had thick black hair that hung down over his face in front, but it was later cut short in the back. Eventually, his time in the fairy realm turned his hair stark white.

He normally dresses in a skin-tight black body suit that left his shoulders and arms bare. Long strips of white cloth were wrapped around his legs from just above his knees and shaped by the power of his magic into legs and feet. His ensemble was finished off with a blue serape-styled cloak.

Mirth initially is a man of mystery. He is dedicated to the Struggle and is drawn to it with an attraction that he cannot deny. He has but one job to accomplish; to place Kevin on the path of a “hero” and to help him unleash his true power. 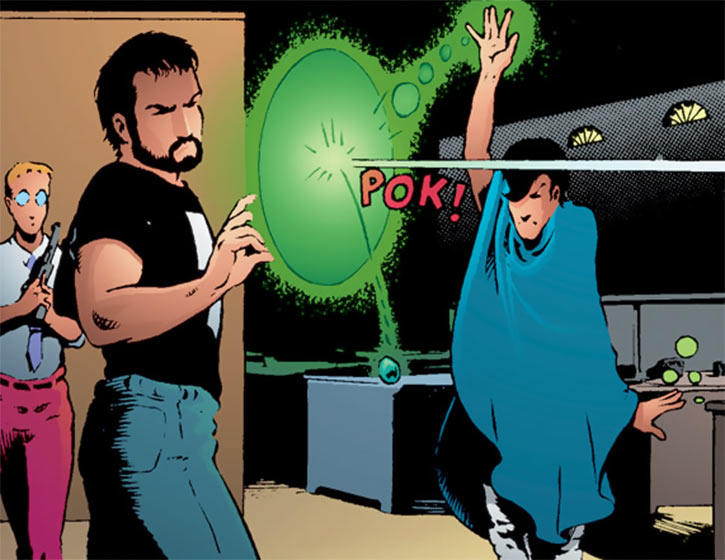 The ease in which he does this seems to indicate that he has done this many many times in the past. Mirth almost instinctively understood that revealing too much to Kevin at once would have made him resist (or even deny) his true nature. This caused him to reveal only the absolute minimum of what he needed to know at any time. This only served to increase the air of mystery about the man.

Despite this, Mirth natural charisma (and fate) allowed him to advice Kevin successfully and turn strangers into allies. He is quick to smile and tends to preach about loving life. Mirth, like his name implies, loves making jokes and having fun.

“Your power ! With it and my magic, we shall crush this menace.”

“My counsel has always been wise to him in the past, has it not ? Then trust me in this.”

“We’ve all had other lifes, Kevin. I just happen to remember all of mine.”

“I have never led you, Kevin. Only advised.”

“I serve the weapon and its wielder. And so you see Kevin, we have always been student and teacher. King and wizard. Hero and Mage.” 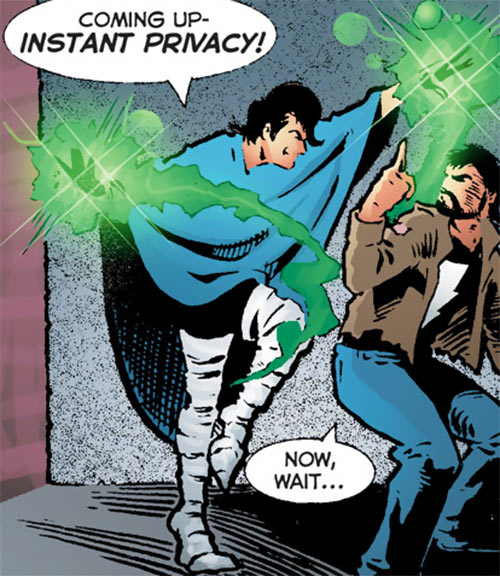 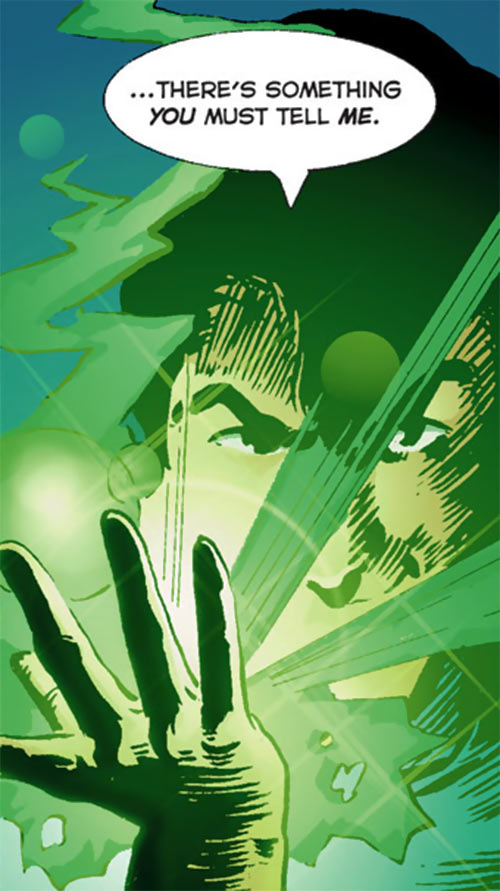 Early sketch with a red cloak : 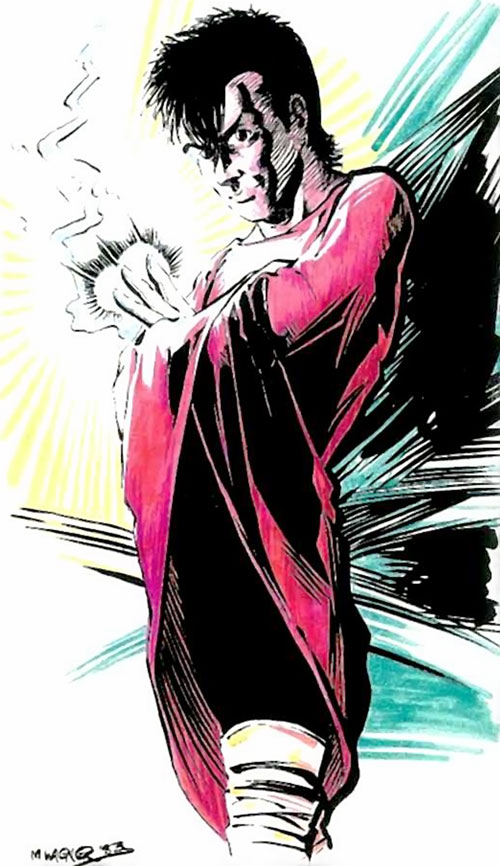