Apart from her teleportation, Misfit also seems to possess enhanced physical abilities. She is agile enough to avoid punches from both Black Canary and Huntress, simultaneously. Furthermore, she heals at an accelerated rate, almost instantaneously when she teleports. These powers are apparently magical in nature.

Misfit has received combat training from Oracle, to supplement the aptitude provided by her powers. When drugged to take part in the gladiatorial fights in the Dark Side Club, she could thus beat more experienced metahumans, such as Livewire.

She’s also shown herself capable of remaining unobserved. Misfit spied on Oracle in her own base for a long period of time.

Charlotte grew up in a Metropolis slum with her mother and baby brother, until a fire broke out at their apartment building. Knowing of her powers, and their limitation, her mother forced Charlotte to teleport herself out. Orphaned, she stayed on her own, living in the burned out remains of her home.

Somehow learning about Oracle and the Birds of Prey, she snuck into Oracle’s headquarters and spied on their activities. Emulating them, especially being a fan of Batgirl beforehand, she put together a costume from scraps she could find. She called herself Batgirl and fighting street crime at night.

Drawing Oracle’s attention with her name, it wasn’t long before the Birds of Prey set a trap for her. Ambushed by Black Canary and Huntress, Batgirl ran rings around them until she spotted an assassin taking aim at the unsuspecting Huntress.

Charlotte teleported into its path, taking the bullet, and teleporting away to heal. Leaving the Birds to deal with the assassin, Batgirl teleported to Oracle’s side.

Oracle, unhappy at someone so young taking her identity, showed her photos from the autopsy of Stephanie Brown (Spoiler) , trying to dissuade Charlotte from crime-fighting. Charlotte reluctantly agreed to abandon the Batgirl identity, but not heroic activities.

Renamed Misfit, she continued spying on Oracle. When the Birds ran into trouble after a mission while Oracle was unavoidably absent, Misfit teleported to their aid. Oracle came to accept Charlie’s presence, since she had no way of stopping her, although she was reluctant to let her go on missions.

Oracle eventually discovered the truth about Charlie’s family, seeming to take her as a ward, and began training her. 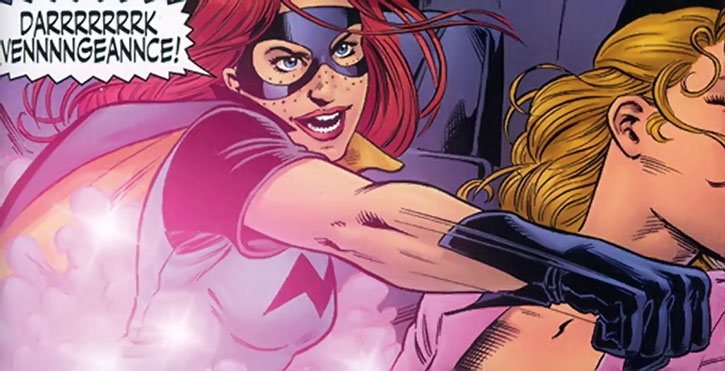 When a giant magical robot was tearing up Metropolis, Misfit teleported into it to confront its teen gangster pilot. But, ignoring Oracle’s orders not to touch any buttons, she accidentally destroyed the robot, its pilot, and a few blocks.

Her guilt over the events, and Oracle’s disapproval, was intensified by Superman’s turning up to chew Oracle out. This led Charlie to become more driven under the pressure.

Oracle intensified Misfit’s training. But she also seemed more detached, which left Charlotte feeling isolated. When Oracle brought in the teenager Black Alice (Lori Zechlin) to help detect the magical source of the robot, Misfit’s isolation turned to jealousy at Oracle’s friendlier attitude to Lori. She lashed out at her rival.

The action overrode the medication keeping Loris temper in check, and she retaliated, then stormed off, warning Oracle to leave her alone again.

The robot’s trail led to Platinum Flats in California. Manhunter’s investigation there got her ambushed by the local metahuman crime syndicate. Oracle sent Misfit in to help, but the pair were captured. Held at the criminal’s current base of operations, Misfit’s regenerative abilities meant she woke before they were expecting her to.

She managed to hold them off long enough for Huntress and Lady Blackhawk to arrive and rescue the pair. By the time they’d recovered, the criminals had abandoned the base. Oracle relocated to Platinum Flats to hunt them down.

Teleporting back to her former home, Misfit was kidnapped. She woke up to find herself in the Dark Side Club, where she was drugged into fighting other metahumans in the gladiatorial arena. She became the reigning women’s lightweight champion.

Charlie was soon joined in her cell by Black Alice, whose medication blocked some of the will-sapping elements of the drugs, although they still limited her abilities.

The pair escaped, but their relationship grew even more confrontational as a result. It then worsened when Lori revealed tests run at the Club showed them to be blood relatives. Freed from the effect of the drugs, Misfit was still depressed and scarred by what she’d undergone.

Impulsive and excitable, Charlotte has a puppy-like eagerness to please Oracle, whom she adopted as a parent figure. This has led her to reckless actions, as she tends to jump into action without much thought.

Her cheerful façade is sometimes forced, when she’s trying hard to convince others that she’s fine. For instance, when she first met Oracle, she make out she had a happy home life, claimed that her mother was a wealthy actress, and pretended that she was popular at school.

She rarely makes mention of her family. It seems that she hasn’t fully dealt with the loss. Her anxieties built up and exploding in outbursts when she’s particularly stressed, such as when she feels her position in the new family she’s trying to build for herself is threatened.

“Betrayal ! It’s a setup ! Oh, youre gonna get a faceful of dark vengeance, lady !”

“You guys are clearly in complete and utter need of my special brand of justice !”

“Hey there, bad guy. Name’s Misfit. I’m here to help my friend there – and also to deliver justice on and about your head.”

Misfit can teleport herself thousands of miles without exertion or error, arriving safely exactly where she wants to be without needing to know anything about the location (Scholar (Telelocation)).

Teleporting also speeds up her regenerative abilities, allowing her to recover almost instantly from apparently critical wounds (Shtick (Conditional Recovery)), such as bullet wounds which disappear.

While she can take others with her when she teleports, living beings are blown apart by the energies, so she avoids doing so at any cost.

This can be handled as the Claws Power at 12 APs (with 8 APs of Sharpness), which automatically (and only) attacks anyone she teleports with her (-1FC), using the APs of her Teleportation Power (not just the APs of distance travelled during the teleport) as AV for the attack (+1FC to Teleportation).

She only gains the Martial Artist Skill after she begins training with Oracle.

She manages to spy on Oracle, in her base of operations, for a while without being observed. While Oracle is surprised her systems didn’t detect the intrusion, I’m assuming the security system only monitors access to the area, rather than constant monitoring of the entire area, so I’ve just given her Stealth to cover remaining unobserved, rather than any power to avoid technological detection.

Source of Character: DC Comics (covers up to Birds of Prey #118). 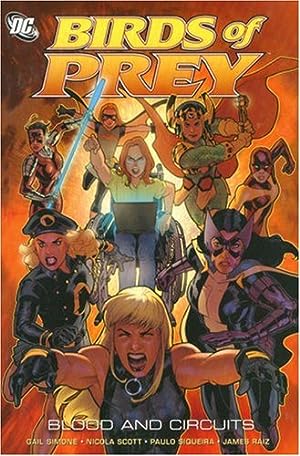 Much dark vengeance and the Birds of Prey TPBs (specifically and in order Blood and circuits, Dead of winter, Metropolis or dust, Club kids and Platinum Flats) 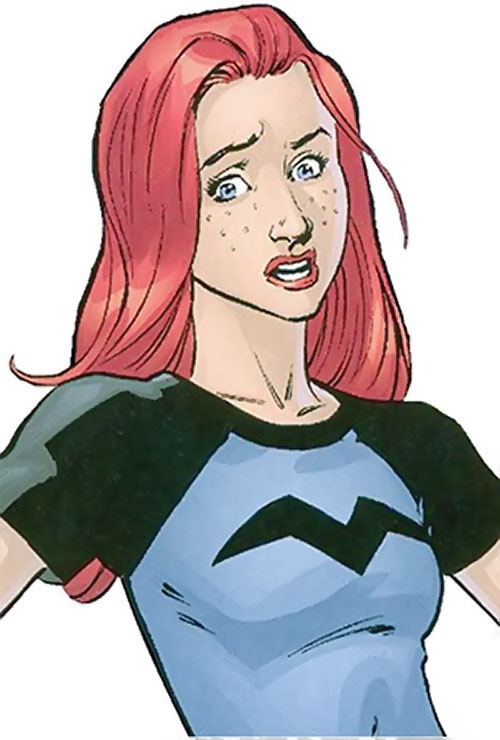 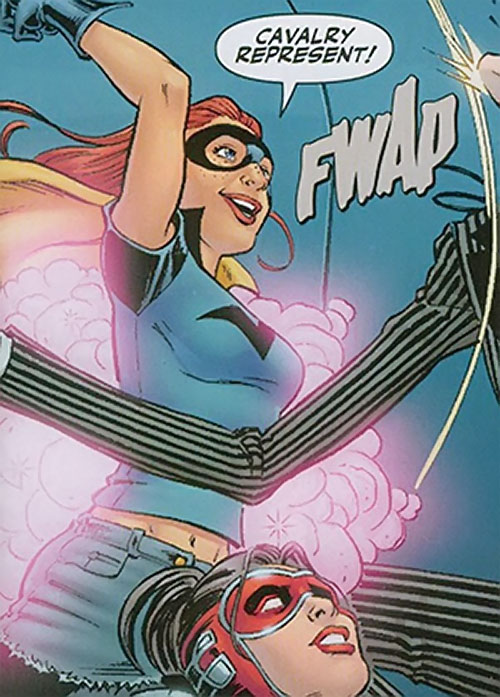 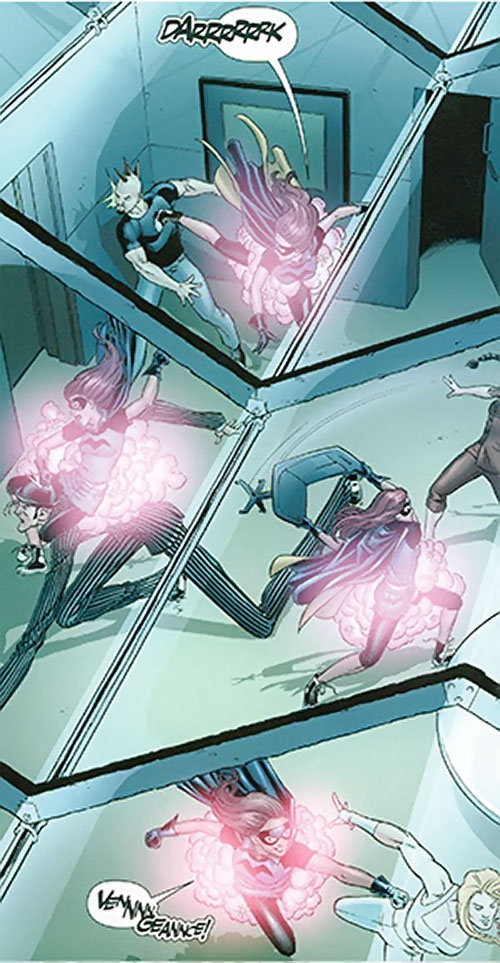 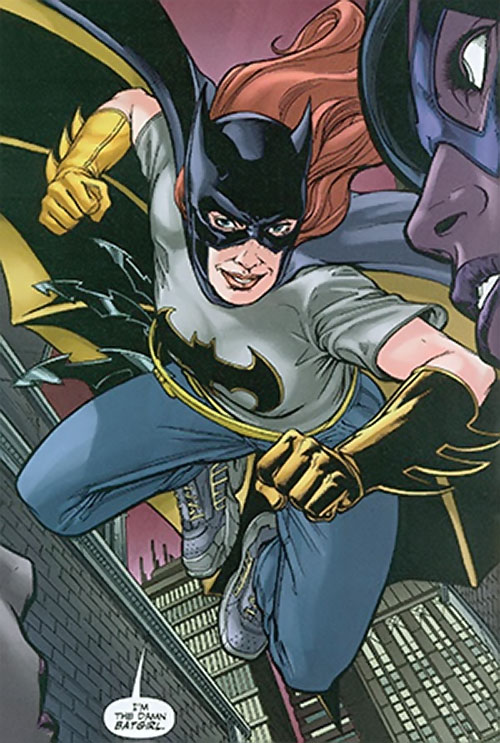