Misfit has been Power Broker enhanced. He is thus superhumanly strong and tough, and pretty fast as well.

It was mentioned that the Misfit had undergone the Power Broker treatment to break into the movies. Perhaps in the hope of becoming a highly-paid stuntman or an action movie actor like Wonder Man.

The Power Broker process has a 50% chance of failure – and Misfit was one of the failures. The damage was not as extensive as with others. But it left his body un-uniformly enhanced and grossly deformed, and might have damaged his mental faculties.

A number of such failures, most looking roughly similar to Misfit, were sent to live in the sewers under his L.A. lab by Dr. Malus. He was the scientist behind the Power Broker augmentation processes. Why Malus had that uncharacteristic moment of mercy was unclear, even to himself.

It is probable that the future Misfit was among the group living in the sewers. At that point all those subjects were highly disoriented and very aggressive.

While Captain America (Steve Rogers) was dismantling the Power Broker operation, he ran into the deformed, maddened ex-Power Broker subjects in the sewers. He was attacked. But the Night Shift, a criminal gang led by Shroud (secretly an ally of Captain America) soon intervened. They helped mop up a half-dozen of the failed experimental subjects.

A likely scenario is that the Shift’s hypnotist Dansen Macabre helped them out of their dementia. Then perhaps at least one asked to join and was accepted – Misfit.

On the Night Shift

While the Shroud was away, Misfit and the rest of the Night Shift attacked the West Coast Avengers. This was as payback for the recent imprisonment of one of their own, Digger. They didn’t fare badly until Wonder Man intervened. Misfit found himself completely outmuscled.

Misfit was still part of the Shift after they rebelled against Shroud. They were approached by the demonically-possessed Hangman, who briefly became their new leader. The Hangman duped them and turned them into agents of Satannish. He did not tell them that the enhanced power they received came at the cost of their souls. 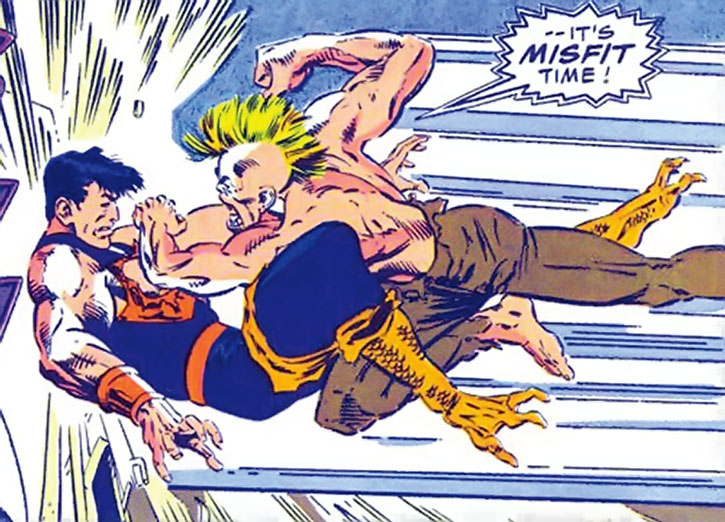 The Night Shift captured Wonder Man. But the actor crudely manipulated the insane Hangman to convince him to shoot a haphazard movie rather than pursue Satannish’s ends. Wonder Ma thus bought ample time, the perplexed Night Shift getting dragged into Hangman’s train wreck of a movie as amateur actors.

The West Coast Avengers, Dr. Strange and Iron Man (Tony Stark) thus had the time to repulse Satannish. Dr. Strange returned the missing souls to the Night Shift, who lost their enhanced powers and were arrested.

Misfit and the rest of the Night Shift soon went free, and resumed operations on their Los Angeles stuff. They once clashed with Captain America and the Blazing Skull. They haven’t been seen much, but are presumably still around.

The Misfit has a serious case of halitosis.

Crude, aggressive, tough and vicious. He answers most problems with violence, and is likely to assault anybody he dislikes. He easily loses control of himself and his strength if angry enough. Therefore, a clever and calm opponent can manoeuvre him into committing mistakes. He’s definitely not a friend of subtlety. 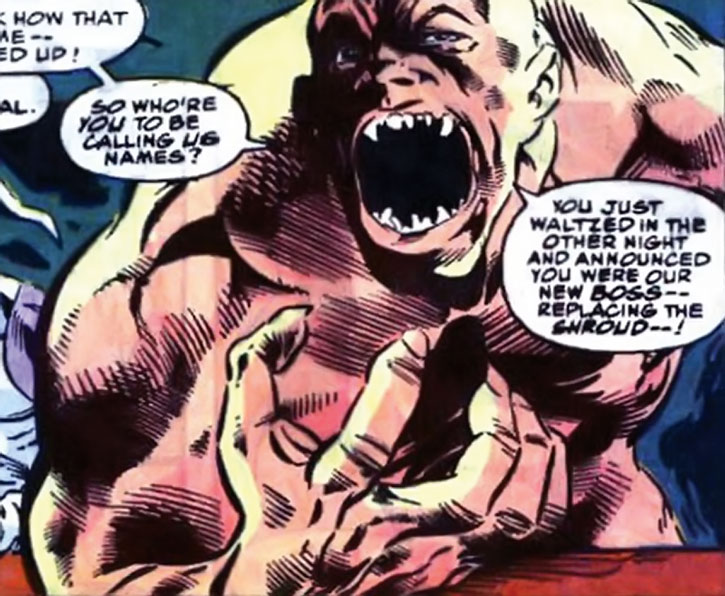 Misfit is frustrated by his monstrous appearance, making him angry all the time. He once started pawing a woman on Hangman’s movie crew, though he was thankfully stopped by others.

Misfit likes throwing threats around. He actually has talent for coming up with 1980s action movie tough guy lines.

(Catching the Vision in a bear hug) “Okay, apple-face – let’s see you break outta this !”

Hapless security guard: “Please, mister — I got a wife and kids —!”
Misfit: “Do I look like a census taker ?” (knocks guard out with a flick of the finger)

(Facing Captain America and pointing at his shield) “You smart talkin’ sap – I’m gonna cram that pizza-pie plate down your gullet !”

The Night Shift largely drew from obscure characters from old horror comics published by Marvel comics. Something that would work fine in the DCU too.

Misfit’s body has not been enhanced all over. Some parts have normal strength and durability – parts of his face, his left arm, the left side of his torso, the back of his head, and so on. Hitting those areas is much more efficient than bashing him indiscriminately.

The OV/RV for noticing the weak spots is 07/07. Various means can be used (Scientist (analysis), Martial artist, Medicine…) at the GM’s call and depending on the rationale provided by the player. Once the spots have been noticed the character can Trick Shot and ignore the Skin Armor. Of course, if the character already knows about those weak spots, they do not need to notice they are here.

If Misfit is hit by an Area of Effect attack (Bomb, etc.) he only gets to apply three of his five APs of Skin Armour.

Under the sun of Satannish

During the brief period where he was enhanced by Satannish, the Misfit evidenced much greater strength and durability. Likely scores are STR 20 and BODY 11 – plus a store of 15 additional HPs, which he likely will spend on AVs and EVs. 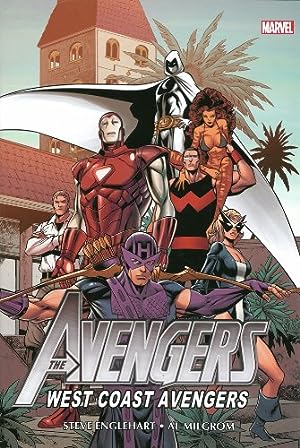 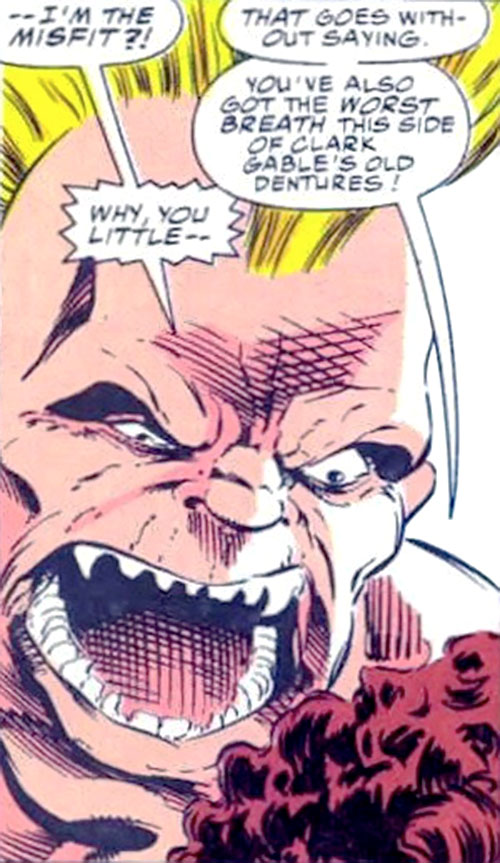 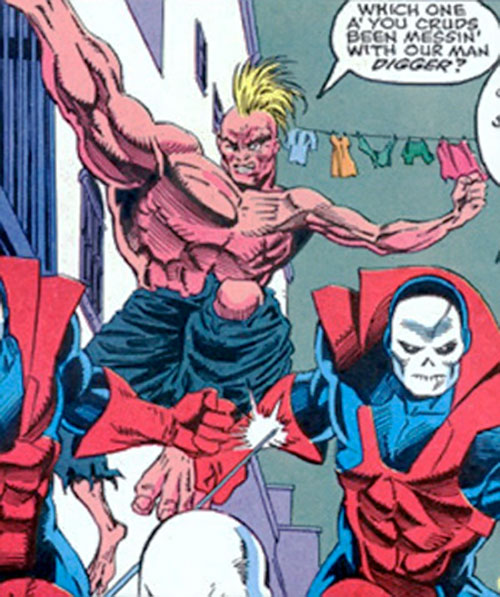 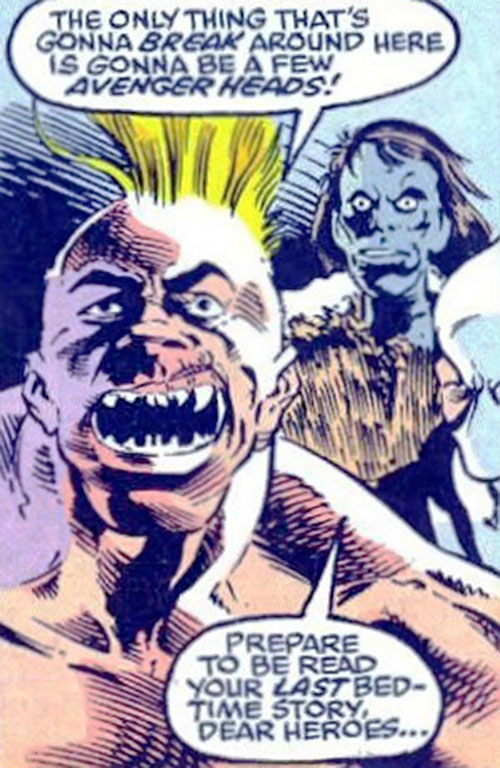 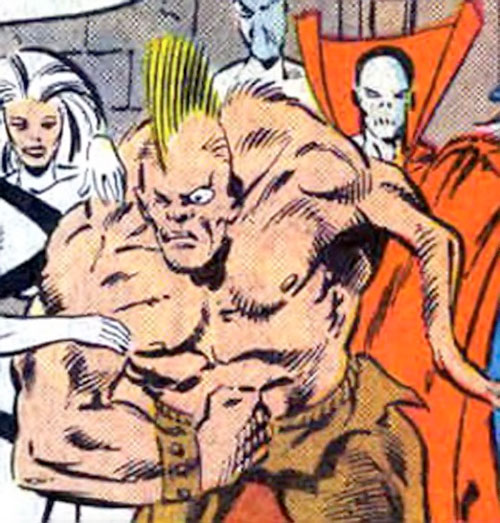