AC Comics is a well-established boutique comic book publisher, specialising in public domain characters and so-called “good girl art”. Femforce is their most famous book, and has been running since 1985.

Miss Victory is one of the powerhouses of the AC universe, and one of the most experienced heroine around. As long as she takes her V-47 pills daily, she’s incredibly strong, fast, tough and remains at a physical age of 26.

The V-47 vitamin was the trigger needed to activate Joan Wayne’s latent Paragon Factor. However, she still requires it to keep her powers activated. Note that this is a psychological need, rather than physical. Paragon has tried several times to get Joan over this dependence.

While under the drug’s effects, she is incredibly strong, able to lift in excess of several hundred tons. She can recall any fact that she has ever known with complete accuracy. Her reactions are hyper fast, far beyond the human norm. This allows her to react to even the fastest paranormals she might encounter.

Her physical sense are all enhanced to peek human ability, save her vision which exceeds that. Miss Victory can see much farther and with more clarity than a normal human.

She is nearly invulnerable, most conventional weaponry doing little harm to her. It takes something exotic or someone with superhuman strength to hurt her. Even when she is hurt, she is incredibly healthy and heals most injuries quickly.

She has highly efficient lungs and can hold her breath for considerable periods of time, although she cannot survive in a vacuums unassisted.

She is also able to fly at speeds well over 200 MPH.

Joan Wayne was born on May 21st, 1915 in Charleston, South Carolina, and became a biochemist. By the time war was officially declared in the US in 1941, government chemists and biologists, including Wayne, were already working on a serum to create the perfect soldier.

The Lifeform Supra-normal Development project’s exact objective was to create an American super-soldier formula. After Vitamin 45 (aka V-45) proved to be unstable and created the menace known as the Black Commando, the project was in danger of being shut down.

Research team leader Dr. Wayne made a breakthrough, creating a more selective version of the V series, V-47. Unwilling to risk further human lives, Wayne tailored the formula to her own body chemistry and experimented on herself. She thus became the paranormal known as Miss Victory. This super-vitamin altered her physiology, boosting it to paranormal levels.

Joan was quickly forced to put these skills to use, rescuing Eleanor Roosevelt  from fifth columnist assassins.

In 1943, Miss Victory joined with She-Cat, Rio Rita and the Blue Bulleteer to fight Nazis in Fort Dix, NJ. The First Lady helped Joan attain official sanction to form an all-woman team of paranormal operatives, code-named Femforce, which became the main American super-group and remained active even after the end of the war.

In the 1960’s, only the two age-resistant members, She-Cat and Miss Victory, remained active.

Miss Victory was also part of the Femforce of the 70’s, which included She-Cat, Nighveil and Synn. Later members were Tara, Colt the weapons mistress and Stardust.

In 1986, Miss Victory, who had not taken V-47 for several days, was force fed an earlier, unstable version of the formula (V-45). The culprit was one of the experimental victims of the projet she once led, the Black Commando. It warped her into the antithesis of the All-American superwoman she’d been for nearly 40 years, turning her personality into the antisocial, violent renegade Rad.

Her daughter (who, of course, shared her body chemistry) had to reluctantly take V-47. She assumed the guise of the second Miss Victory until her mother was cured in 1992. While not outright evil, Rad was terribly selfish, and it took the combined might of Femforce to hunt Rad down and remove the V-45 from her system.

Joan Wayne is still the leader of Femforce, but her daughter snapped and became the second Rad.

Miss Victory wears a red, white and blue outfit, with a diamond shaped-opening from her lower throat to her navel.

In short, she’s the equivalent in the AC universe of Captain America or Superman : an icon.

“There ! Fem Paragon, you’re beaten ! And if you are Rur’s biggest gun, I’d say the war is about over !”

Not much room left for an inclusion of the full Femforce universe into the DCU, especially since power Girl was liberally inspired by Miss Victory… The main solution may be to make them the official superteam for another nation (for some reason I want to say Finland).

Drawbacks:
MIA to her All-American ideals, Mistrust (only when she was Rad), Secret ID, Loss Vulnerability (if Miss Victory does not take V-47 every 24h, she starts losing all her powers, super-human attributes and her Life support advantage). 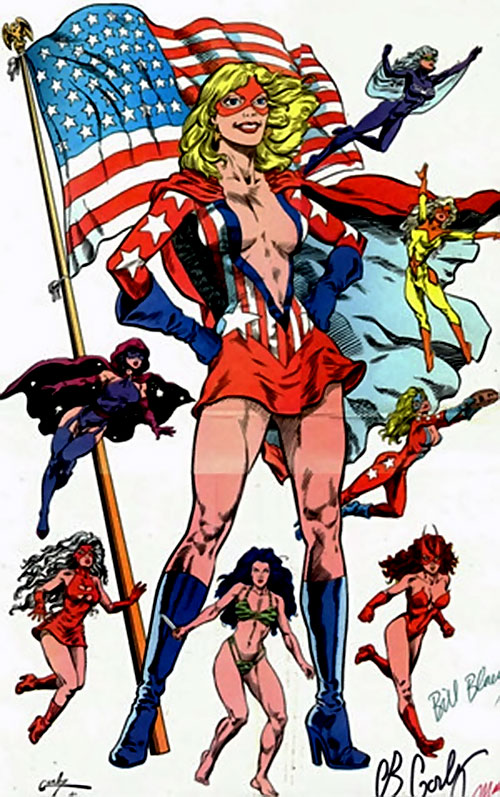 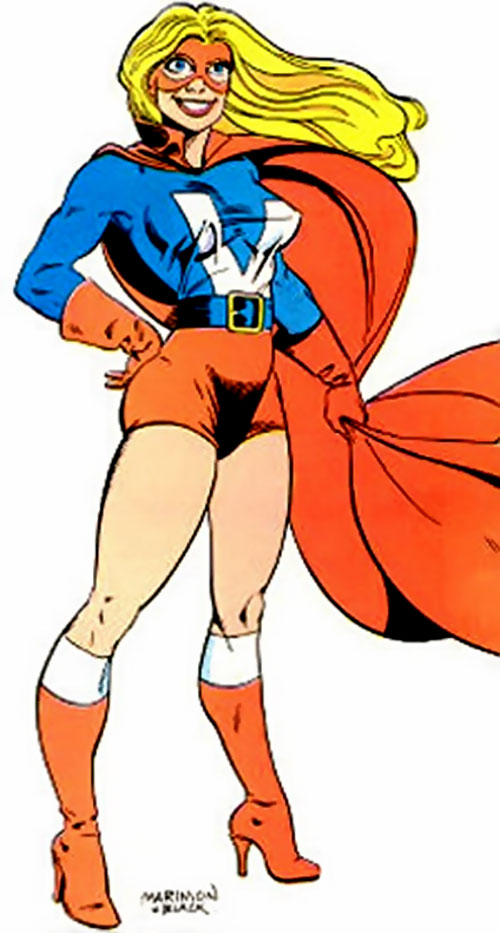 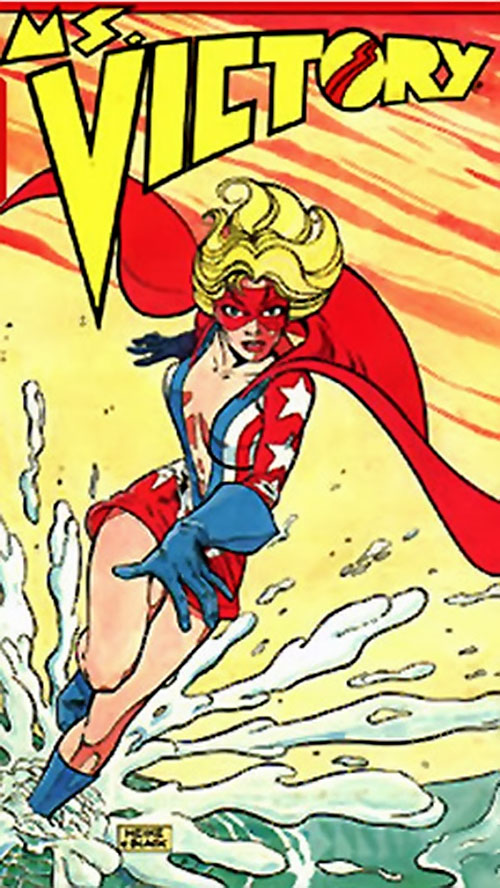