The Mist (Kyle) appeared during the early issues of the 1994 Starman – the one with Jack Knight. It was an intriguing book — which would soon become a fan-favourite — so I took a few notes back then.

Kyle seems well trained in special weapons and tactics. He had little trouble leading a virtual army of violent criminals in a complex, cunning crime wave. It left the Opal City police powerless due to the numerous diversionary tactics.

He’s also an excellent marksman, and a superior hand-to-hand fighter.

For a few days, he used the Ted Knight-built belt that Skyman, the former Star-Spangled Kid, used as Skyman during his Infinity, Inc. days.

Kyle is the eldest son of the Mist, a WWII criminal whose arch-enemy was Starman (Ted Knight). Raised by the Mist to be an evil, cunning, ruthless criminal, he made his father proud during unrecorded crimes. These culminated when the Mist’s children engineered an operation meant to destroy Starman and everything related to him.

Kyle fatally sniped Starman VI (David Knight, the son of the first Starman), killing him. Then he almost killed Jack Knight (David’s brother, who became Starman VII). He led a crime wave that killed many and had Opal City, Starman’s cherished home, red with flames and blood. He also kidnapped Starman (Ted Knight) and delivered him bound and helpless to his father, the Mist.

Kyle’s plan to ruthlessly avenge his senile father culminated in another fight with Jack Knight. The younger Knight had reluctantly claimed the Starman name during the crisis. Both fought to the death in the skies of Opal City. Jack won, incinerating Kyle with the power of the Cosmic Rod.

Kyle is a Tarantinesque fellow dressed in a black suit a wearing peculiar shades. These glasses were later claimed by Nash when she became the new Mist, as a tribute to her brother.

Kyle immediately struck Jack Knight as being hyper, possibly crazy. He seems sociopathic, with a strange, sadistic sense of humour.

He’s particularly eager to serve his father. He wants to be “evil” so he can fit a senile old man’s delusions.

The only other person Kyle liked was his sister, Nash. 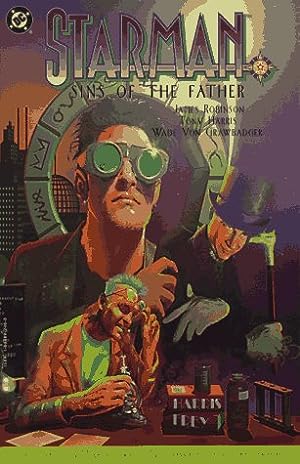 Starman vol. 1: Sins of the Father