Mister Clean only appeared in one X-Men story arc, in 2001. Howbeit, he’s super-useful.

Mister Clean is a superior armed and unarmed fighter. He could credibly engage Wolverine in hand-to-hand combat, and never seemed to miss with his arsenal.

His reflexes are enhanced and quite possibly superhuman. When Nightcrawler suddenly teleported right behind him, Mister Clean delivered an elbow thrust in Nightcrawler’s face before Wagner could punch him, something few people are capable of.

Generally speaking, Mister Clean was an incredible combatant. He faced three veteran X-Men by himself and managed to escape unharmed, beating up his opponents and seriously wounding one.

Clean has been enhanced, using chemicals and various other means.

Most notably, even Wolverine found it hard to inflict serious cuts on Mister Clean. Slashes that should have lopped off a limb just resulted in nasty cuts. And Mister Clean ignored the pain from those.

Clean apparently has an implanted radio or cell phone. He could communicate and receive calls from his handlers without any apparent gear, even in the sewers.

Mister Clean was an enhanced soldier and killer. He was fielded by the Church of Humanity to eliminate communities of mutants, using military search and destroy tactics. How many mutants he murdered during his career is unrevealed. It is thought to be in the dozens if not the hundreds. 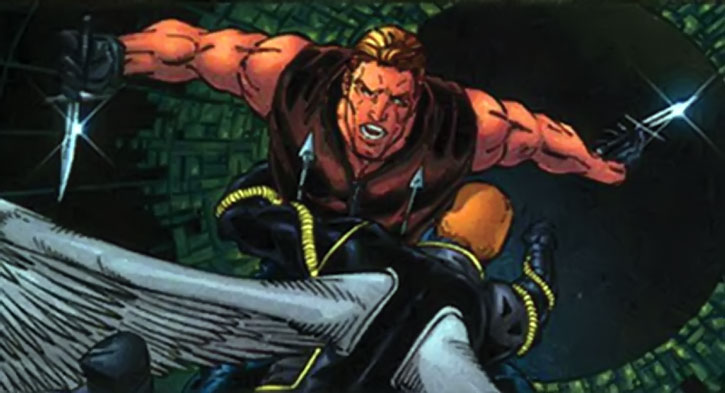 His best-known mission was to hunt down and slaughter a community of largely British mutants. These had found refuge in the sewers system under London. He easily killed their leader and protector, the Cyclops. He then used the panic to slaughter much of the community using his flamethrower.

Only a handful of mutants escaped the gruesome carnage. Mister Clean proceeded to track them down in the sewers.

Mr. Clean clashed with three X-Men – Angel (Warren Worthington III), Nightcrawler and Iceman. These had been attempting to make contact with the nearly extinct mutant community. He easily repulsed them, inflicting a serious knife wounds to Angel. Clean then left.

However, the three X-Men soon recovered. They were then reinforced by their colleague Wolverine, and found the handful of surviving mutants just before Clean did.

Their tactics were simple. As Angel and Nightcrawler helped the harrowed mutant survivors, Iceman erected an ice wall. This was both to prevent Clean from reaching them, trapping him in a sewer tunnel with the dreaded Wolverine.

However, even Wolverine found it difficult to handle Mister Clean. Yet he eventually managed to detonate the dorsal reservoir of his foe’s flamethrower with his lighter. Mr. Clean is thought to have died in the explosion and has not been seen since.

Mister Clean is a confident, aggressive soldier who deeply hates and reviles mutants. He’s obsessed with killing them as thoroughly as possible. Clean always burns the corpses to ensure a ’clean’ kill, and never gives up.

Mister Clean once passed the time by jamming one of his blades into his forearm. It is possible that his enhancements to resist cutting attacks included rewiring his nervous system so that getting cut evokes mild pleasure rather than pain. This would help explain his ability to withstand Wolverine’s claws.

“Allow me to introduce myself. I’m Mister Clean. Genetic cleanser.”

“A ha. You wanna throw down with *me* ? I’ll make you wish I’d killed your mother while she was carrying you…”

Some stats are speculative due to lack of material.

Acid Immunity, Cold Immunity and Systemic Antidote in particular are not clearly demonstrated. I’ve just extrapolated those from his overall tolerance for damage. 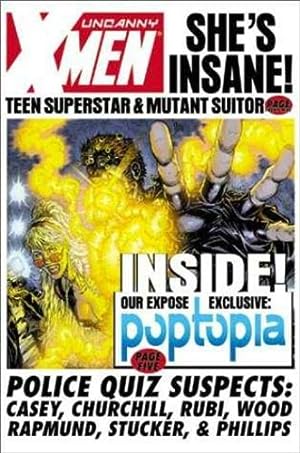 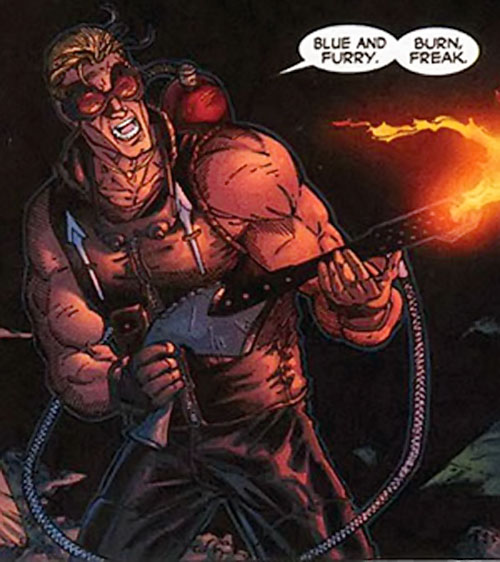 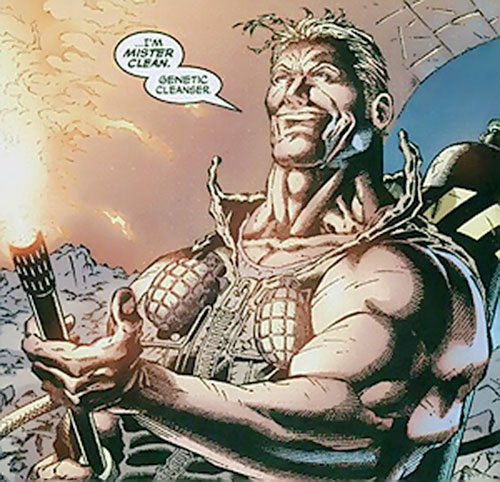