Mister Doll owns a figurine, which is apparently made of clay. He has trained himself to mould it (simply using his fingers) into a good likeness of a person within seconds. The bulk of the effigy doesn’t have to be sculpted – only the head, and particularly the face, counts.

Once the doll is in the likeness of a person, it can remotely inflict excruciating pain to that individual. The wielder simply has to apply pressure to the doll, usually using their fingertips. The victim will be wracked with pain in the corresponding area of their body.

This pain ignores all mundane protections (such as body armour or even force fields) but can presumably be magically countered.

Secondary sources  note a link between the puppets used by the Puppet Master (Phillip Masters), and the Brother Grimm dolls that Nathan Dolly would later use.

Thus, it is *possible* that the effigy Dolly used as Mister Doll was also tied to these artifacts.

The commonality is the use of earth from Mount Wundagore, in the (fictional) South-Eastern European country of Transia. The foreboding mountain was infused by the essence of the Elder God Chthon, giving its clay and wood strong mystical properties.

(Elder Gods were the first things that came alive on Earth. They were immensely powerful. But most of them, especially Chthon, became profoundly corrupted. The primordial Elder Goddess Gaea, who had merged with Earth itself, eventually decided that enough was enough. She had a son, Atum, and unleashed him as Demogorge the God-Eater. He slew nearly all demonic Elder Gods.)

The figurine used by Mister Doll was procured somewhere in Africa, leaving us with three main hypotheses :

Nathan Dolly was an international dealer in curios. He had a specific interest in genuine mystical artefacts. Once, in an unspecified African country, he bartered with a “witch-doctor” for a magical doll. Apparently, Dolly fooled the man into thinking they were friends, and stole his secrets.

Coming back to the US (apparently Long Island) he created the identity of Mister Doll.

In 1963 he started torturing wealthy men using the magical effigy. Doll forced them to cede their fortune to him. Since Doll’s victims were too terrified to press charges, the police were helpless.

Given that Doll was going through Long Island’s richest men, he would soon run into Tony Stark. However, they clashed even before that. Mister Doll was terrorising one Mr. Carter. This forced Carter to cancel an urgent commercial contract with Stark.

When Iron Man came to investigate, he survived Mister Doll’s onslaught by but the thinnest margin.

This encounter is what led Tony Stark to redesign the Iron Man armour to make it much lighter. The goal was to lower the strain on his damaged heart when experiencing severe physical hardship (such as Doll’s power).

With this new suit and various manipulations of his pacemaker, Stark endured Mister Doll’s torture long enough to build a beam emitter. This gadget somehow could reshape the magic doll if pointed at it.

When Mister Doll saw that the effigy was turning into a duplicate of himself, he reflexively dropped it. The doll falling to the ground knocked him out, and he was arrested.

Nathan Dolly never recovered this effigy. Who took it is unclear – either Stark or the police.

Mister Doll eventually was released from prison – perhaps during the mid-1970s.

He soon started looking for a replacement magic doll. He eventually found one in Django Maximoff’s shop.

Maximoff, an aged Romani shaman, sensed that Dolly was evil. But the old man was depressed and did not care anymore, and thus agreed to the sale.

Dolly bought a pair of magic figurines made using Mount Wundagore wood. Maximoff taught him how to project his spirit into such a doll, possessing and animating it.

Nathan Dolly eventually mailed himself back home, leaving his corpse behind. With his wife Priscilla, he would soon enter a strange new phase of his life.

The costume of Mister Doll may have had magical significance. In particular, the horned headgear is roughly similar to the one worn by the witch doctor who sold Dolly the doll. Plus, there was no apparent reason for Mister Doll to run around in a costume – so it may help operate the effigy.

A greedy, entitled, unempathic predator. He revels in the ability to effortlessly torture defenceless persons.

(Torturing Iron Man) “Hah ! If only the unknowing public could see their mighty idol now ! Your much-vaunted strength is useless against the mystic powers of Mr. Doll !”

“So long as I have the mystic power of my little doll, no force on Earth can resist me !” 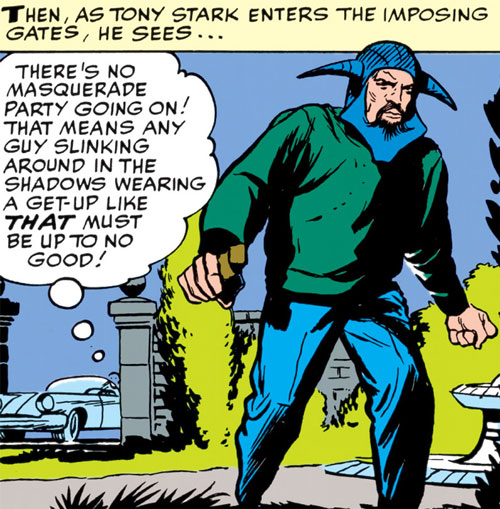