Vintage Cage nostalgia led to his comeback… and some fishy continuity issues.

Apparently there’s noise about him being the worst Marvel villain ever. I dunno. These things are so petty and random.

He also can breathe underwater. We’ll assume that he is an excellent swimmer.

He’s an experienced street criminal in New York City, and seems familiar with the Harlem underworld.

He’s also a good shot with firearms and rocket launchers.

In 1976, Mr. Fish headed his own gang. These mooks were surprisingly capable, and packed powerful Maggia-issue firearms.

The weapons were probably built by Frost Enterprises back when Whitney Frost was secretly the Big M, or Maggia leader.

One of the thugs, a dwarf named Jorge “Shrike” Moat, was particularly quick and agile. He also was aggressive and quick-witted. But Shrike was utterly sycophantic toward Mr. Fish.

Back then Mister Fish had a special blasterA gun shooting energy, like in Star Wars.. It could hurt even Cage with some luck. It presumably was rare Maggia ordnance, perhaps built by the Nefaria mob.

Later on he was still packing – presumably a .44 magnum revolver. But it made more sense for him to punch things.

When working with Tombstone he used rocket launchers and submachineguns. 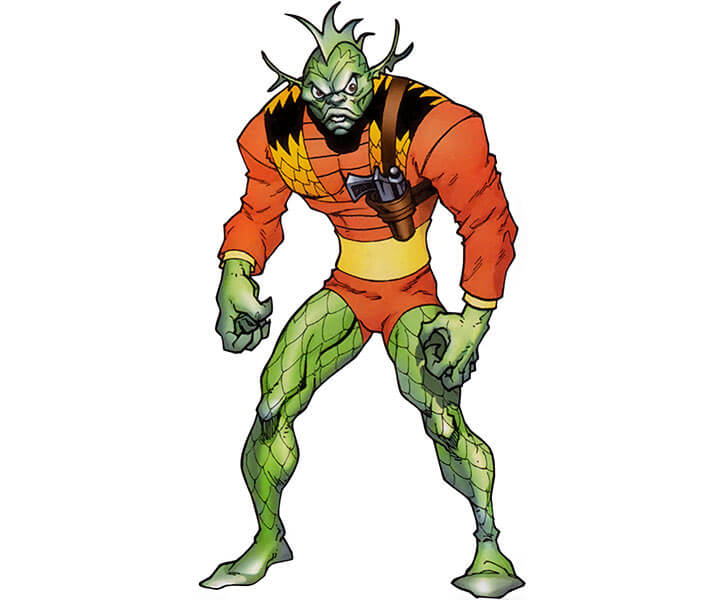 In his youth, Mort Norris was part of a small-roster, small-time Harlem street gang. The other members were :

The gang came up with the gimmick of having their teeth filed into fangs. Cornell, Lonnie, Raymond and Mortimer all underwent this operation.

However, the group split over personal differences. The projected Fang Gang never came to exist. But Mort remained the closest to Lonnie.

(For additional chronological notes, see our Cornell Cottonmouth profile. If Mako was indeed the inspiration for the fangs thing, perhaps it was Norris who was the big fan.)

The original version of the tale was that Mr. Fish was a small time thug and thief connected with the Maggia. He and a few others were hired to attack a truck carrying a valuable isotope.

It worked, but Mort Norris was exposed to the radiation. Sick, he toppled into the East River, and spent hours mutating under the filthy water.

However in the Fang Gang flashback Mr. Norris is already mutated. Though his appearance isn’t *quite* as scaly and he still has hair.

Furtherworse, “Cockroach” Hamilton mentions that “Mort ain’t had all that surgery done [yet]” at this point. 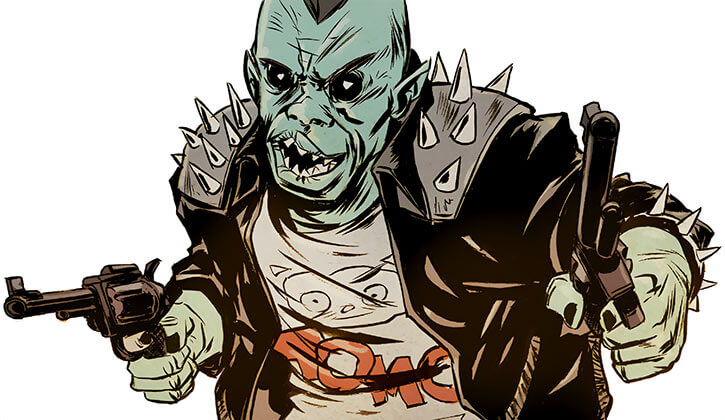 As a young gangster.

(A No-Prize Hypothesis is a made-up explanation to reconcile continuity contradictions.)

And indeed, the Maggia was interested in his brawn. They had him work as their rep in Harlem, seconded by a well-armed crew of African-American gangsters.

(It stands to reason that the surgeries, the advanced firearms, and giving Norris his chance at leadership stemmed from his ties with Lonnie “Tombstone” Lincoln. Lincoln was well-connected and feared in the New York City underworld, and is famously loyal toward his friends.)

Cage couldn’t prevent Shrike from blowing up much of the company. But he chased the diminutive gangster until he came face-to-face with Mister Fish and his gang.

Fish got a lucky shot in. His gang then took the unconscious Cage atop a building under construction. But Fish couldn’t resist recounting his origin story, giving time to Cage to recover.

Cage could thus catch a I-beam during his fall. He acrobatically swung back up, then beat up Fish and his gang.

Something to evoke 1976… Mmmm… Heh, that was when Kingfish released their debut album.

My fav on it — a Marty Robbins cover — is far too country-ish for the character. And my heart belongs to the far more sombre Johnny Cash version anyway. But c’mon, Kingfish.

But a man with a similar appearance was spotted in 2006. In one panel of a series with terrible continuity.

Back then, this led secondary sources  to hypothesise that Mortimer Norris had a brother, William. It was theorised that they were working together during the isotope heist. And had both been exposed to the radiation and polluted water.

But Mister Fish made further appearances. By 2017, it was clear that Mort Norris was still alive. Thus, in hindsight, the Bill Norris hypothesis can be filleted off. 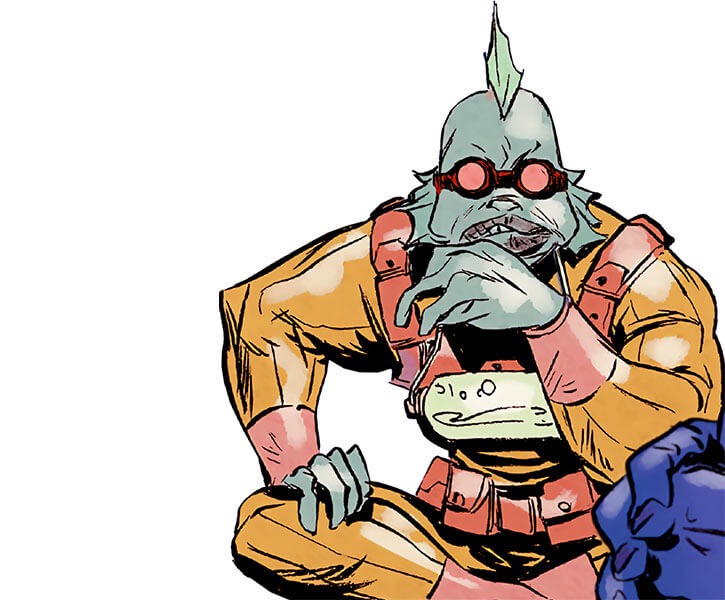 Do the Harlem shuffle

In 2017, Tombstone was the big kahuna in the Harlem underworld. But Mister Fish came to warn him about rumours that his hold was weakening.

Norris also told Lincoln that the Black Cat (Felicia Hardy) was preparing her move into Harlem.

His information was correct. But the two gangsters were blindsided by Alex Wilder. Wilder teleported into Tombstone’s office, and magically banished Mister Fish to a netherworld.

Tombstone paid sorcerer Black Talon (Samuel Barone) to bring Mr. Fish back. This was easier than expected, and Norris recovered from the shock.

Fish and Tombstone hunted Wilder for weeks. They found him in a fight with Luke Cage, Iron Fist and allies.

Though they opened up with rocket launchers, the fight didn’t go well for Norris and Lincoln. Mister Fish was battered by the demonically possessed Wilder.

He nevertheless got back up and tried to kill Black Mariah for having betrayed Tombstone. Mariah’s friend Jennie tried to stop him. 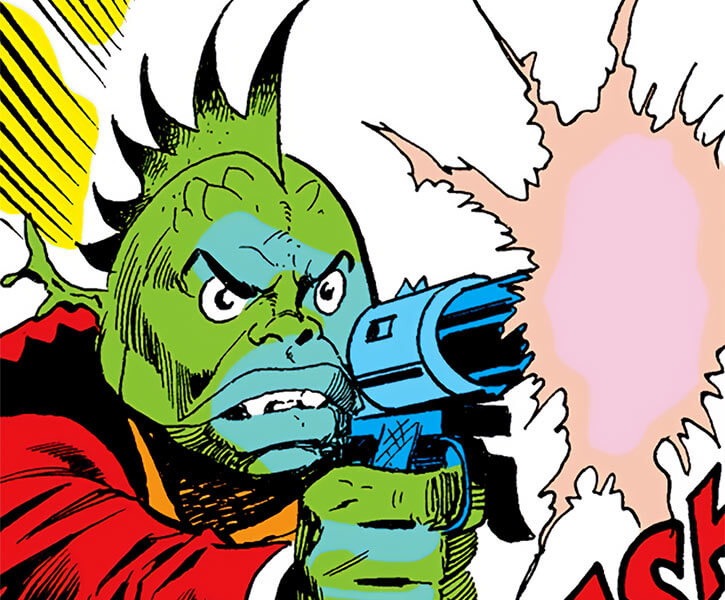 During his 2017 appearances, Mister Fish has a tank of liquid on his chest, with flexible tubes linking it to the side of his mouth. He also had slightly glowing goggles.

It is therefore *possible* that his mutation continued, requiring protection for his eyes and hydration for his gills.

Although Fish is supposed to be a dumb, cheap thug, he’s actually eloquent.

While he acts like a tough gang leader and made man, it’s obvious he’s actually craving acceptance, respect and understanding. In particular, he will never pass an opportunity to tell his origin story.

His 1976 catchphrase was “No one laughs at Mister Fish”.

He also made less effort, diction-wise. One assumes his need to compensate for his appearance was less acute.

He was less verbose and more aggressive. He was also big on revenge. Perhaps he realised that a rep for always avenging slights was more effective in getting people to shut up about his looks.

“There is nothing funny about it at all, Shrike ! Mr. Cage and I would have had to have met eventually ! And in case you also see some humour in your situation, Mr. Cage — allow me to point out to you — that no one laughs at Mr. Fish !”

“Your words have sealed your fate, Cage ! Take him !”

You can throw in some APs of Skin Armour (Structural Damage only). This would explain how he survived his 1976 fall.

Now, this is a comic book. So there’s no *need* to explain this sort of thing. But it’d give him a little something extra.

In 2017 he may have had 015 or even 020 Hero Points. It is also possible that his goggles were because his eyes were more adapted to the depths, giving him Ultra-Vision APs but difficulties seeing on land. 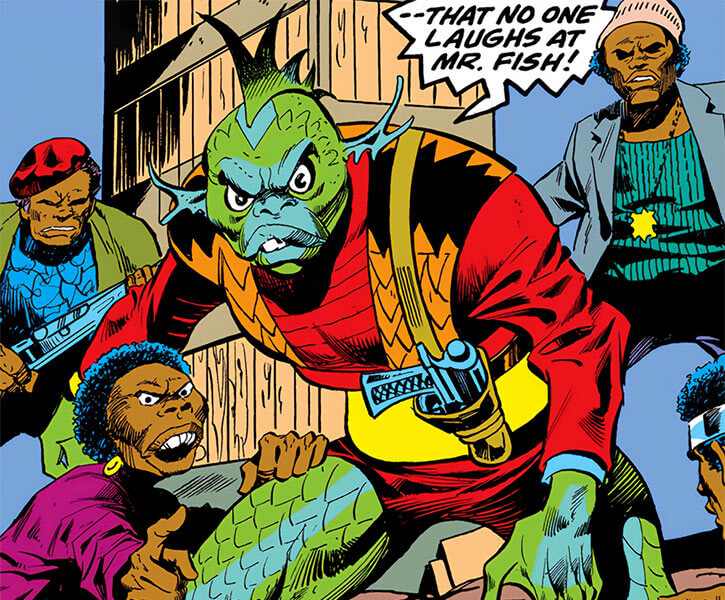 These seemed more competent than the norm, so let’s adjust their stats. 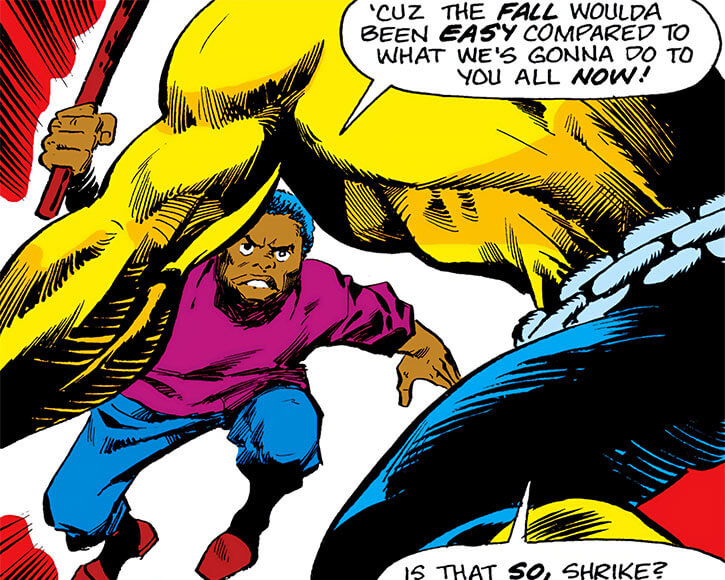 “That may be, mistah Cage ! But yo’ still gots to go through us first !”

Shrinking is Always On and Already Factored In. OV against ranged attacks is upped by one, running speed is 03 and mass is 01 AP.

MPR (Short limbs and some health issues due to dwarfism), MIA toward being sycophantic.

Shrike will often grab a handy steel bar [BODY 04, Enhance (EV): 01 (cap is 06), Descriptor: Blunt)] to hit people with. This compensates for his low mass and reach.