Ba-Goom is a veteran alien tyrant. He is a superb gadgeteer  and scientist and handles exotic, alien weaponry reasonably well. While on Earth, he cultivated the role of a friendly toy, which he did admirably well.

Glum knows an impressive amount of foul language, and he stand ready to verbally pummel anyone he faces like a true dictator.

Several times larger than our own universe, the Void is an interconnected pathway to all realities past, present and future. However it is remote – in DC Heroes RPG terms, it has a very high Travel value. The Void is teeming with life — from huge lizard-like creatures, to intelligent humanoid beings such as Mr. Glum.

Rex Dexter, the first Battle Tank, has spent years studying the void as a means of time travel, teleportation, and energy generation. There is currently a dimensional portal to the void dimension in the headquarters of the new Liberty League in the basement of the Dragon’s home.

Ba-Goom, aka Mr. Glum, hails from a planet in the Void (Dimension-X), a planet where he was the most powerful being. Ba-Goom wanted to prove himself all-powerful by defeating the Earth hero known as Dragon. Though he was able to enter Dragon’s house by a teleportation device, the threat he posed was not taken seriously.

Angel Dragon, the daughter of Dragon’s wife Jennifer, found him and treated him as though he was a doll (Ba-Goom is the size of a child’s doll). This was a role that Ba-Goom readily found useful. For a while Dragon didn’t even realize that Glum was anything but one of Angel’s play things.

Secretly, Glum has tried to kill Dragon several times without success. Both Dragon and Angel seemed to think that the little guy was harmless, although Jennifer was not so sure.

Eventually, Mr. Glum’s plans for world domination were realized using the power of the God Gun (a powerful relic able to grant any three wishes to its user). Glum fired the gun and asserted his control of the planet while the Dragon was incapacitated in a hospital, having lost his rapid healing abilities.

Glum was, at the time, on the run with the Dragon’s stepdaughter Angel after he caused her to grow to more than 100-feet tall. As a result, she accidentally destroyed her house and crippled her mother.

The two become partners, and Angel adopted a murderous, merciless personality under Glum’s control, while Glum set the people of Earth to work with the impossible task of remaking the planet into looking like his face (as his old world did).

The Dragon was revived with his healing abilities restored. He was able to defy Glum’s control because of a loop-hole in his wish that meant he couldn’t control extraterrestrials.

The Dragon was unable to get close enough to Glum due to the various robots and villains Glum has under his control. However, the intervention of a number of extradimensional characters (from the Wanted universe), who had come to steal the God Gun, allowed Dragon to instead destroy the weapon, thus negating Glum’s wish.

Glum readily departed back to Dimension-X, leaving the chaos of Universo and Solar man to be dealt with. Glum stands ready to fight another day!

Mr. Glum is a dwarfish alien with red skin who wears a part of shorts only. He apparently looks so small and cute that people mistake him for a toy unless he is upset or angry in which case he grins with his teeth.

He is sometimes seen carrying one gadget or another, or a blaster . While in his armor only his face is visible through the helmet part, the rest being a humanoid sized metal exoskeleton.

Mr. Glum is a ruthless alien intent on conquering the Earth. He will create far-reaching plans for the future and work hard to accomplish these over the years.

His plans usually include the creation of dangerous gadgets or the retrieval of dangerous and powerful artifacts that will enable him to take over the planet. In the meantime he plays the friendly toy role.

His general manner is to insult anyone he talks to, the only exception being Angel Dragon. Despite it being dangerous or counterproductive at times, he keeps doing it just for the hell of it, and will not be threatened into silence or inactivity. He basically treats every as if they were his underlings.

He is, simply, put generally a nasty guy, and much more dangerous, ruthless and power hungry than most people realize until it is already too late. He is a veteran tyrant from Dimension-X and cares nothing for the suffering he incurs on people because only his will is word.

Once on a plan or course, he will not be dissuaded – this included the insane plan to reshape the Earth through slavery into an image of his own face. The best engineers warned him that the Earth couldn’t be rebuilt into a red, grinning sphere, but he refused to listen, terminated said engineers, and recruited new more obliging ones instead.

Once he is defeated, and it will happen, he hastily makes his escape to fight another day, leaving only suffering and chaos behind. But make no mistake, every left behind will remember his evil.

A tyrannical little bastard he may be, but he does have one, single redeeming quality: he really cares about Angel Dragon. He really did enjoy playing childish games with her while planning his next move. He did what he felt was right for her, even though she was being mind controlled and normally wouldn’t agree to his, for anyone else, insane orders.

Although Glum has a deep affection for Angel he still seems intent on defeating Dragon, nothing is allowed to dissuade him from any of his goals. Get ready, earthlings, ’for the bastard from Dimension-X is here to take over everything!

The colorful language of Mr. Glum

In game terms, Mr. Glum will attempt, only for the reason of being generally nasty, to Intimidate many of the people he talks to (although people very rarely care about his insults).

A Player that continuously keeps on referring to people by new, colorful and innovative insults will be very much in character and should receive an extra Role-Playing HP award. Extra HPs may be awarded by scored Intimidation RAPs on non-standard humans.

Rex Dexter: “As you can see, my dears, mister Glum has become completely intangible, thanks to the aid of this devilishly clever wrist-device.”
Mr. Glum: “Ha ! Ha ! Ha ! See ? I can pass right through this feeble, leathery-skinned old dullard !”

(Firing the God Gun !) “I wish that every single human being on this stupid planet would do what I told them to do ! Individually, I mean… when I tell them to individually.”

(Giving orders) (to Battle Tank) “You — get me access to all of the country’s top inventors.” (to Kid Avenger) “You — line up all of the new networks so I can communicate with the masses.” (to Mighty Man) ’You should be out for Savage Dragon’s blood. Go take care of him !‘ (to SuperPatriot) ’You get me access to this country’s weapons.” (to Kill-Cat) “As for you… get this girl a pony.”

Bonuses and Limitations:
Shrinking is Always On (-1) and Already Calculated into stats.

Mr. Glum takes over the world !

After he had fired the God Gun he had the Control power rated at 35 APs, but with the following Limitation: Control power can only be used on any human being that was present on the planet when he fired the God Gun (-1). Gods, aliens and recently arrived humans from other dimensions are thus excluded from his control. This meant that he couldn’t control the Savage Dragon.

Some time after he had established control he had the planet’s greatest scientist design a protective armor for him, inside which he resides from that point on: ARMOR [/BODY/ 12 /STR/ 12, Force Field: 06, R#02 – and he later added Energy blast: 10].

While having full control over the planet, his Wealth rating was practically infinite (or, say, 75 APs) for any and all purposes. During and after this period, Glum likely had the Notorious Advantage. 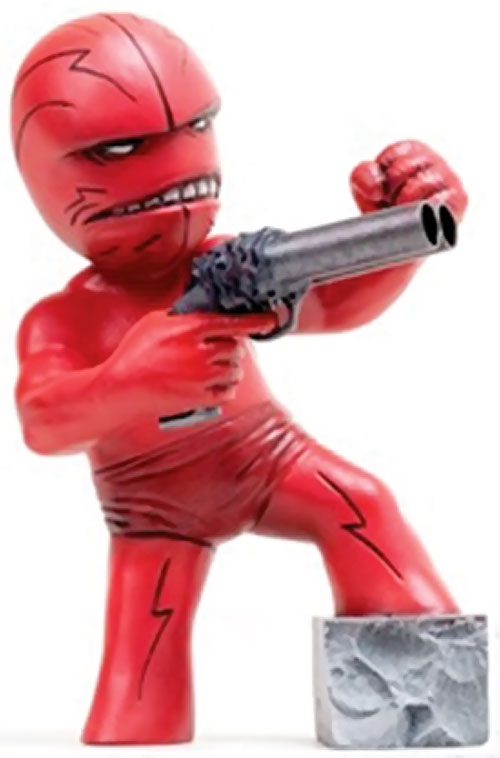 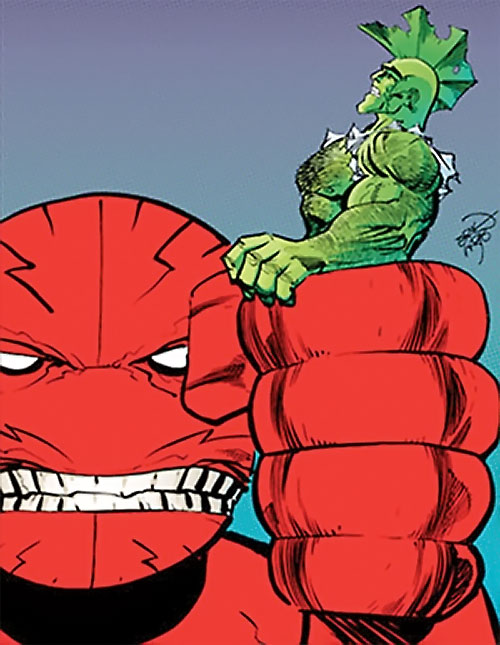