For more context, you can read our Miranda Zero character profile. We also suggest reading this here profile after the profiles for Global Frequency agents Jia Lau and John Stark. These recap the two documented cases Mister Grushko helped with.

Mister Grushko is a hulking, scary man. He seems to have extensive experience with combat, torture and slaughter. One gets the impression that he possesses exceptional physical and mental endurance.

When seen in a tactical situation, Mr. Grushko wielded a Franchi SPAS-12 shotgun. But if he can, he’ll prefer to have his axe. This is a long, specially sharpened felling axe – not unlike a traditional Dane (or Russian) war axe. Mister Grushko excels at mutilating and killing with his special axe.

He likely has some sort of counter-intelligence experience, in the broadest possible sense.

Mister Grushko is a Russian specialist working with the Global Frequency.

A huge man in a dark suit. He has a messy “high and tight” haircut, pale skin, bushy eyebrows and strange tiny rectangular sunglasses.

He might have a form of albinism. But it’s more likely that he just has pale skin and bleached hair. One of his teeth has a skull-shaped steel jewel on it.

His grammar in English is very slightly off, suggesting an audible but not thick Russian accent.

A creepily calm, articulate man with a really bad vibe about him.

Beyond killing people, Mister Grushko primarily skill seems to be intimidation. And, yeah… he’s really good at it. So it’s unclear whether he’s really some sort of monstrous psychotic axe murdering ogre, or it’s an act.

My own intuition — based on nothing — is that he actually has some sort of cinematic murder addiction disorder. In this hypothesis, his deal with the Frequency is that they provide him with expensive medication and care.

This allows Mister Grushko to live peacefully, free of his urges and without being a danger to people. Which would be why he gratefully refers to Miranda Zero as “my friend”.

“Did you ever have a nightmare about a large man who killed your parents, and your siblings, and then your lover, and then everyone you know ? And then burned your house down and destroyed everything precious you ever conceived of ? That was me.”

“I am here. I have my special axe with which I did all those terrible things in Miami two years ago. The policeman who found the bodies. He still wets himself when he sees cutlery. You will tell my friend Ms. Zero where your owner is.” (rests his axe’s head on the man’s groin) “You have until I swing my special axe down on this point. The worst thing about this is that it will not kill you.”

“[Lau] told you that you were not leaving the room.”

Mister Grushko is an horror movie slasher archetype, such as Michael Myers or Leatherface. One quote loosely suggests that he was created by writer Warren Ellis after a nightmare.

Having a terrifying, preternatural axe murderer help the good guys is a rarer sub-archetype. We used that one for Kerann Mardirossian, the Devil’s Executioner.

Drawbacks:
Creepy Appearance and perhaps others. 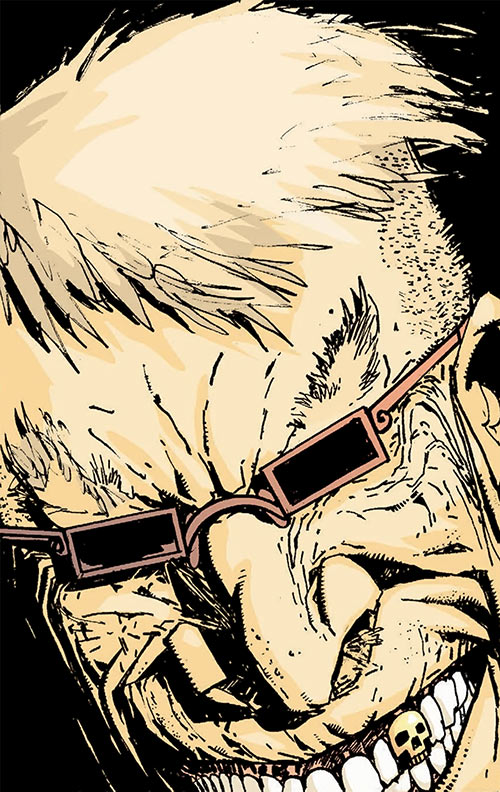