Mister Immortal has been called a Homo Supreme. He is a mutant who has evolved beyond death, and will allegedly survive to see the end of the universe. He has no particular resistance to injury, but if he is killed, his body heals back to peak health, bringing him back to life.

He is enraged when he comes back to life, and will take a couple of minutes to calm down on his own, although Dinah Soar could calm him in seconds.

Craig Hollis’ mother, Audrey, died giving birth to him. Escorted to the afterlife by Deathurge — the embodiment of self-destructive urges — Audrey made him promise to look after Craig.

D’Urge became Craig’s imaginary friend, leading him into various kinds of potentially fatal activities through his childhood. On his eighth birthday, Craig played with matches at D’Urge’s urging, which resulted in his father’s death.

Placed in foster care, Craig ended up with the O’Doughan family. Despite an abusive home Craig and the O’Doughan daughter, Terri, grew close, eventually falling in love. They ran off together to Milwaukee, but Terri’s depression from her upbringing remained and she committed suicide.

Finding her, Craig was shocked to learn D’Urge — whom he hadn’t seen in a while — was real and was escorting her spirit to the afterlife. In shock, Craig tried repeatedly to kill himself, but it never stuck.

Deciding to use his powers as a super-hero, he named himself Mister Immortal. The first time he tried stopping a crime resulted in him getting shot, and not recovering until the criminal had fled. Deciding he needed teammates with less passive powers, he placed a personal ad and soon had a team. They decided to call themselves the Great Lakes Avengers.

He grew close to Dinah Soar, and she helped him overcome his grief over Terri. The pair fell in love, and Dinah chose him to be the one person who could hear her talk.

Growing disillusioned with the GLA’s lack of success, Craig considered quitting the team. Then news broke that the Avengers had disbanded, and he saw a need for the GLA to fill the void. His elation lasted until they attacked Maelstrom. Dinah was killed and carried away by Deathurge.

Craig fell into a deep depression, unable to do anything but mope around the groups headquarters. When Squirrel Girl’s squirrel sidekick, Monkey Joe, was murdered by Leather Boy Deathurge appeared in squirrel form to take him away.

Mister Immortal managed to capture him, and forced him to speak. Deathurge revealed that Craig wasn’t Homo Superior (a mutant) but Homo Supreme, having evolved beyond death. He was destined to outlive everyone and learn some great secret as the end of all things. Deathurge had been taking away his loved ones to prepare him.

Deathurge also admitted to working with Maelstrom, and told Craig his location. While the rest of the GLA dealt with Batroc’s Brigade, Mr. Immortal confronted Maelstrom. Knowing his connection with Deathurge implied suicidal tendencies, Mr. Immortal convinced Maelstrom his plans wouldn’t succeed in the way he hoped, and that he’d never actually achieve anything.

Craig then shot himself in the head, prompting Maelstrom to follow suit. Mr. Immortal then recovered in time to shut off the machine and save the planet.

When Squirrel Girl travelled to the end of the XXIst century to be with the pre-Penance Speedball of an alternate timeline who’d been stuck there, Mister Immortal appeared to tell her she was needed in her own time.

Serious and relentless, Mister Immortal has no compunctions about throwing himself into hazardous situations. He knows that the worst they can do is kill him, and so he often leads the team from the front.

He displays manic-depressive tendencies. Craig shifts from bursts of hyperactive enthusiasm, in which he’s filled with ideas on how to make the team the superstars he believes them to be, and period of melancholy sadness, in which he can’t be bothered to do anything.

He was involved in a relationship with Dinah Soar, and her death devastated him, as had the death of his first love, Terri O’Doughans’. After Terri’s death he tried killing himself (thereby learning of his powers), and he did the same after Dinah’s death, even knowing it would not work.

It is questionable whether his mind is particularly stable given the trauma that these deaths had on him, along with dying numerous times, and now facing the possibility of living forever. But he has not so far exhibited any serious mental problems.

“Hey, now tell me somethin’ that scares me, folks ! I’m Mister Immortal ! All you’re threatening me with is death ! An’ dyin’ is what I do best !”

“We are now and ever more… the west coast adjunct to the Thunderbolts… the Lightning Rods ! Attracting malignancy away from those it would see electrocuted in its negatively charged grip of evil !”

When news of his abilities reached Vandal Savage, the villain sought him out and tested his abilities by killing him in numerous gruesome ways. The GLA helped him escape, and Savage, satisfied that he wasn’t an incarnation of the Immortal Man, lost interest in him. Mister Immortal still bears a serious grudge against Savage.

Advantages:
Rich Friend (Big Bertha), Immortal, Misc. (Can see Deathurge even when he’s invisible to others).

When he initially appeared he had Serious Rage for a couple of minutes after returning to life, which could only be countered by Dinah Soar talking soothingly to him. 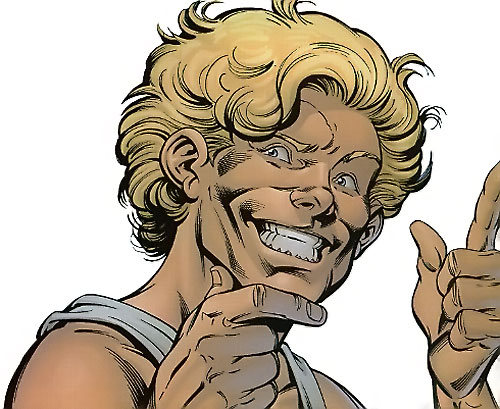 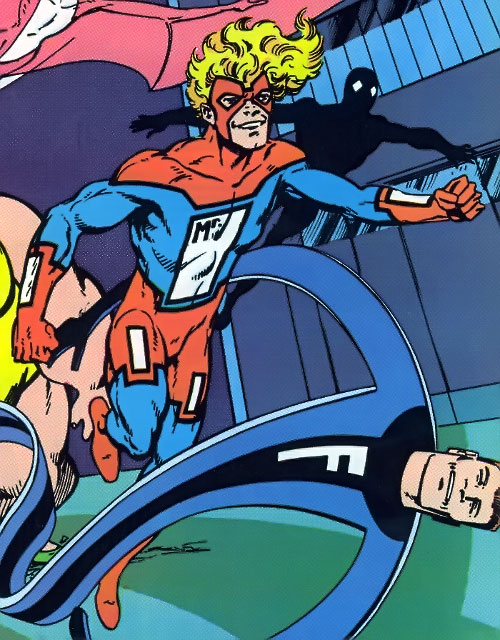 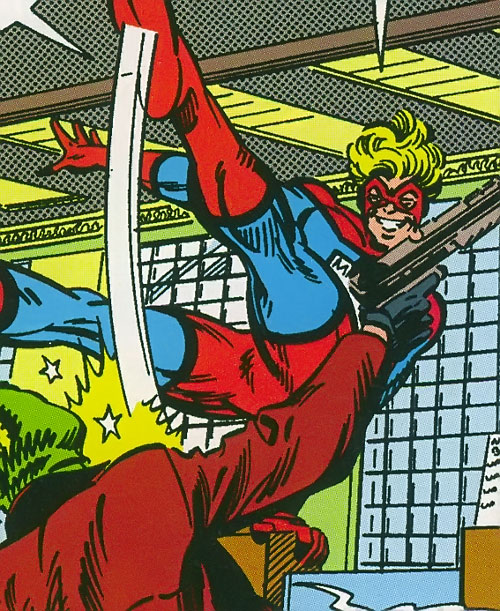