Mr. Ize has strange powers of an unrevealed nature, stemming from his eyes. His metallic visor seems to be permanently affixed to his head and necessary to regulate his eyebeams. This device includes transistors in the frame and batteries in the earpieces, concentrating the might of his gaze.

Our game stats assume that Ize’s powers are innate but were revealed and made useable by the visor.

Windows into the soul

Mesmerised subjects initially behave robot-like, especially if they try to resist. They will eventually act normally, though in accordance with their instructions. Subjects report that being subjected to Ize’s power is like having a sun shine within one’s head.

When using his powers to solve a situation, Mr. Ize seems to ponder between many different options, then use a very precise type of eyebeams. This hints at Ize having a wide variety of ocular energies at his disposal. It is thus possible that he may be able to emit whatever wavelength is needed, such as red sun radiation.

This writeup sticks to what he actually demonstrated, but further Powers are a definite possibility.

One scene also implies Telescopic vision, with a magnification of 5x or so. But the evidence for this is too weak to include it in the stats. Still, it would fit the concept.

Mr. Ize seemed to have some sort of scientific background. He could tell the melting point of a lock just by looking at it, but it is unclear whether this was some sort of super-vision, a knowledge of metallurgy or locksmithing, or the usual comic-bookish Science! skill in action.

His Power of Hypnotism gives Mr. Ize vast resources – both wealth and servants. He can quickly bring to bear entire squads of shock troops, plus common military vehicles. One of his operations featured two halftracks full of well-armed soldiers.

He can secure elite henchmen by mesmerising special agents and master criminals. He can also obtain the services of specialised military assets, including jet bombers armed with 4,000 lbs. HE and tear gas bombs, or heavy airlifters. This is reflected in his Rank advantage – Mr. Ize can flex consequent military muscle.

During the 1960s, Ize was a scientist and an optics specialist working on special glasses for surgeons. He accidentally discovered that his prototype allowed him to project powerful eyebeams — apparently by concentrating the power of his gaze.

Ize tested his powers by mesmerising a guard at a museum to give him a highly valuable jewel, and never looked back.

But 1966 Ize already was a master criminal with considerable assets. Yet intelligence and law enforcement agencies knew little about him. Presumably, this was due to the extremely tight security and secrecy that having completely brainwashed henchmen and agents brings.

Ize operated in the Atlas mountains (in Northern Africa). The flag flown by his vehicles was a golden crescent on a red field, somewhat similar to the Turkish flag.

Ize, thanks to his intelligence, resolve and mysterious powers, had more income and firepower than some small nations. His base in the Atlas had a small but modern air force, and extensive ground-to-air firepower including SAM batteries.

Ize conducted numerous for-profit military raids to appropriate riches in the Third World, pillaging presidential palaces and the like. He never hesitated to leave body counts in the dozens — if not more — to steal millions of dollars in goods. Those would get sold on the black market, to further develop his arsenal and assets.

Toughest man in the world !

Ize used his hypnotic powers to recruit the best soldiers for his work. By the mid-1960s he started recruiting feared fighters and criminals to build a cadre of elite enforcers. By 1966, his team included :

In ’66, Ize decided to add Sarge Steel to his ’collection’. Ize successfully mesmerised Steel and made him fight for him during one of his pillage operations.

However, during this operation Steel, greatly slowed down as he was attempting to resist the mental control, was apparently shot dead. He actually only had been grazed by the bullet, but the blow to the head broke the psychic conditioning.

Steel was left for dead, but then rejoined Ize’s convoy, gambling that he could pretend that he was still serving “the master”.

This worked, and Steel found himself in the midst of Ize’s base with his free will. Ize came to suspect something, and Steel tried to fight off the other enforcers and escape – but Ize confronted him. 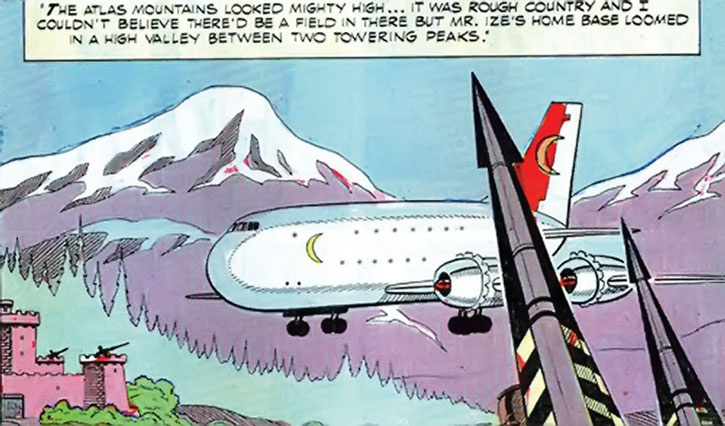 Though Steel was falling under his sway, he reflexively hid his eyes with his hand. The polished back of his steel fist started reflecting the beams at Ize, eventually frying his brain and leaving him catatonic.

The various soldiers and enforcers in the base were freed from Mister Ize’s mental control. Plunged in confusion they all fled, leaving the victorious Steel alone in the immense base.

He was generally inexpressive and emotionless, but there was more than a hint of megalomania.

“If you wonder why I came for you, Mr. Steel, the answer is obvious ! I recruit very violent people… you are necessary to my business ! I probed the brains of these criminals and discovered one common fear… they feared you, Sarge Steel… so to enable them to function at optimum efficiency… I eliminate you as a possible enemy… and realign your thinking so that you become an ally instead ! Is that clear ?”

Advantages:
Credentials (His own organisation, High), Headquarters (Expansive, multiple bases), Rank (Major — his organisation has about the military assets of a small contemporary US battalion).

Writeup completed on the 2nd of February, 2011. 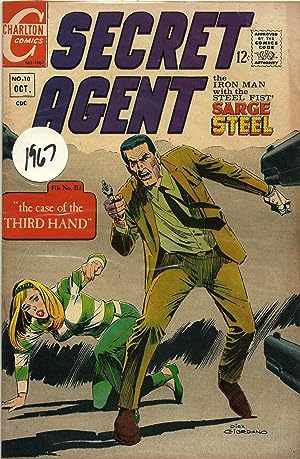 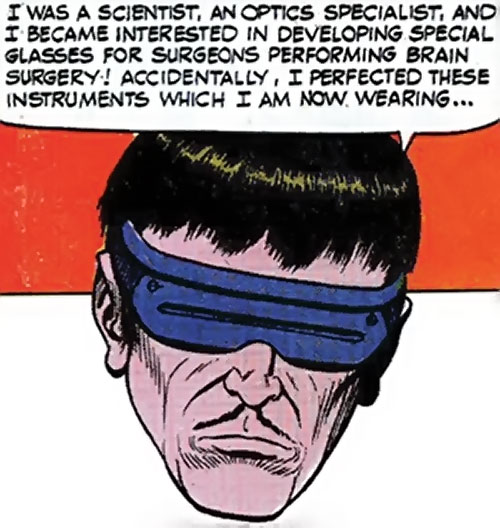 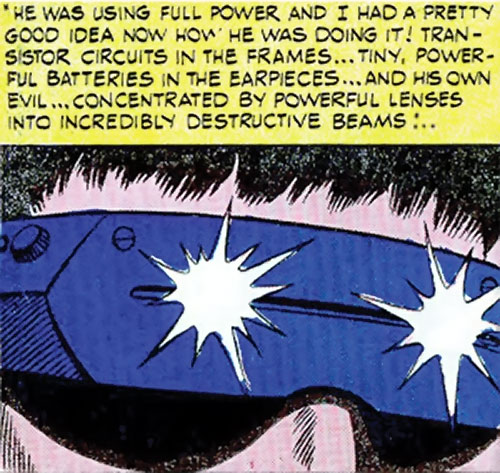 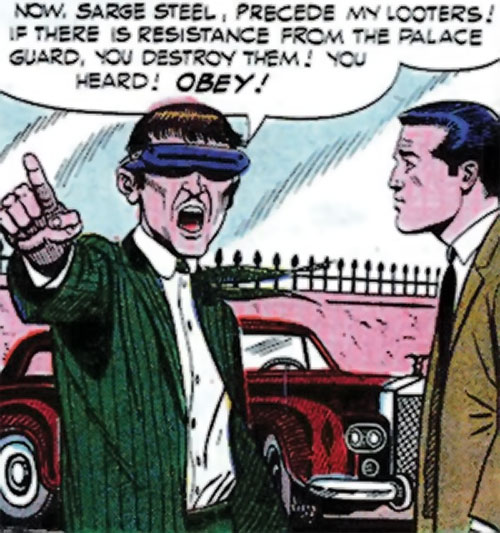 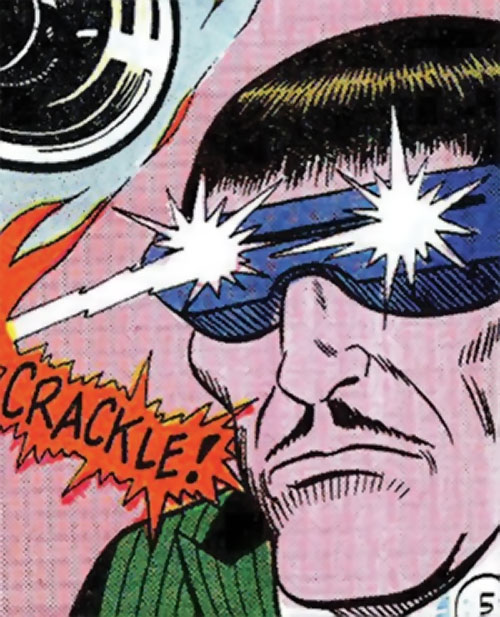