Mister Kline the Assassin appeared in Marvel Comics in 1971-1972.

It was a terribly mysterious story that involved the height of genre cool back then – killer robots, time travel, rewriting history, political manipulation, little being explained, and characters called “the Assassin.”

This Gerry Conway story is also in some ways a precursor for the big annual crossover events. These became a staple of Marvel’s schedule in later decades.

Though back then the Marvel books were more siloed, Mr. Conway was writing a half-dozen of them. He used that to pull off a then-rare move – a story that took place across multiple issues of both Daredevil and Iron Man.

The Assassin is an android with superhuman strength.

His eyes can shoot energy beams. He favours his eyebeams over close combat, even though they seem less accurate.

He’s pretty good at manipulating people, especially if one realises that he doesn’t truly understand human beings. The Assassin is primarily a schemer and manipulator.

In combat the Assassin tends to stay on a near-fanatical offensive. In DC Heroes RPG terms he will Press the Attack whenever he can.

Kline has the skills and resources to build advanced androids.

These will usually believe themselves to be human, which is likely why they seem psychotic. Or perhaps all templates for human personalities available in the era of Baal had psychiatric and faith issues, including Mister Kline.

Three such androids have profiles on WORG :

Alternatively, it is possible that all three were originally human beings who were rebuilt as robots or full conversion cyborgs to serve as agents. If so, they are unaware of this. 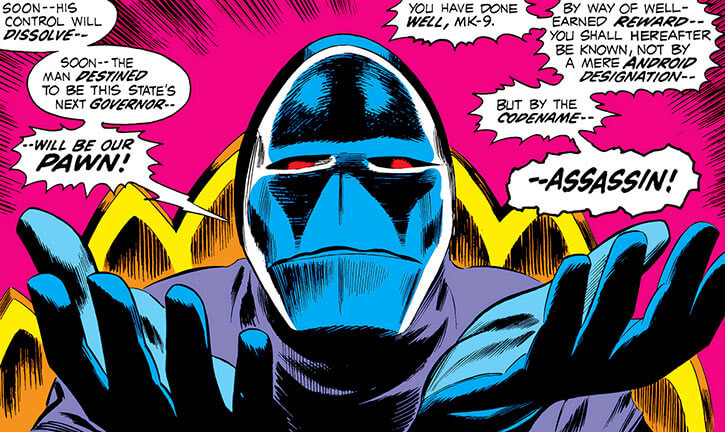 Circa the 120th century, the computer Baal was created to govern Earth.

However, after two millennia, Baal was alone. Humanity had either perished – or abandoned its homeworld.

Hoping to alter history to prevent this, Baal sent android MK-9 back over 12,000 years. MK-9 was to set in motion events whose repercussions would affect Earth a hundred centuries hence.

But Kline was more interested in Daredevil’s friend, D.A. Foggy Nelson. He blackmailed Nelson over a past impropriety, to undermine his gubernatorial aspirations. 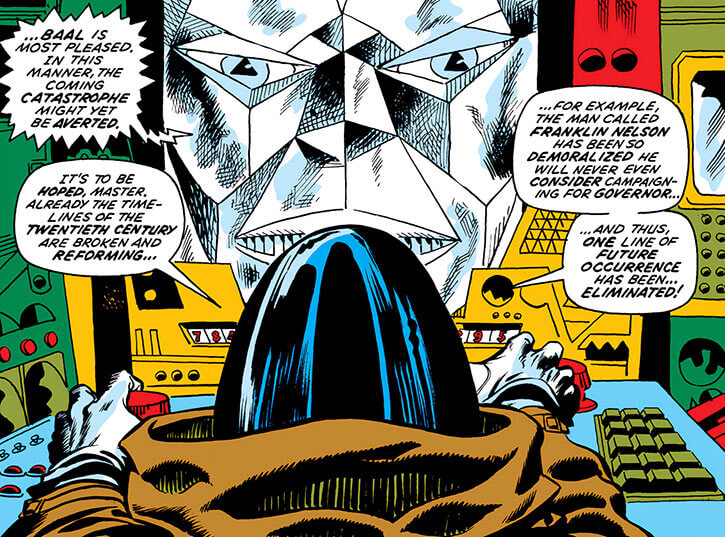 Baal. Though with the paranoid fever dream style of the story, it might not actually be Baal.

Meanwhile, two Kline operatives, the clawed Slasher and the telepathic Demitrius, sabotaged buildings. These had been designed by industrialists Tony Stark and Ben Crandal, who were to be discredited.

However, Kline’s operatives were defeated by Iron Man. When Stark testified in Washington, D.C., the two attacked again – within the Capitol. But Iron Man again prevailed.

Pulling strings in the shadows

Back in New York, where he had carefully cultivated a reputation as a criminal mastermind, Kline entrusted Daredevil’s abduction to the Owl (Leland Owlsley). But the Owl tried to kill his foe instead.

Kline therefore arranged for Daredevil’s rescue by the Black Widow (Natalia Romanova). Kline hoped that Romanova would romance Murdock as part of his plans.

Returning his attention to Iron Man, he assigned the enigmatic Mikas of his “Mutant Sector” to abduct Stark’s girlfriend Marianne Rodgers. Iron Man was lured into a trap, where he could be turned into an anti-military pawn.

However Mikas, maddened by his own power, tried instead to kill the hero. Stark released his armour’s full energy to destroy Mikas’ base.

Kline fared better with an android Scorpion (MacDonald Gargan) duplicate. It lured Daredevil and the Widow into battle, then fell to its “death”. As a result, the Widow was accused of murder.

Nelson, directed by Kline, prosecuted the Widow. And Matt Murdock defended her.

With the “victim’s” body destroyed, the charges against the Widow were dropped, again at Kline’s orders. This made Nelson look like a fool.

As anticipated, feelings developed between Murdock and the Widow. Thus, whilst the Widow vacationed in Switzerland, Kline approached her as scientist “Emil Borgdsky”. He told her about a cure for blindness. Murdock thus came to Switzerland.

Apparently, Mister Kline knew that recovering his sight would end Daredevil’s career. This apparently would have significant effects on the timeline, advancing Baal’s plans.

The CXXth century, of course

But Daredevil discovered MK-9’s base while the android was busy conferring with Baal over time radio. Kline revealed his android nature and attacked, but received a head injury.

As Kline struggled to repair himself, the empathic Final Sons of Man came in from the 170th century. These were two metallic, armoured or robotic “new people”.

The Final Sons’ goal was to ensure that Baal’s future would lead to their own, by destroying Kline and his base. They then teleported Daredevil and the Widow to safety and departed.

Although Kline is no more, the full extent of his operations was never determined. Thus the ultimate effects of his activities upon the future cannot be predicted. 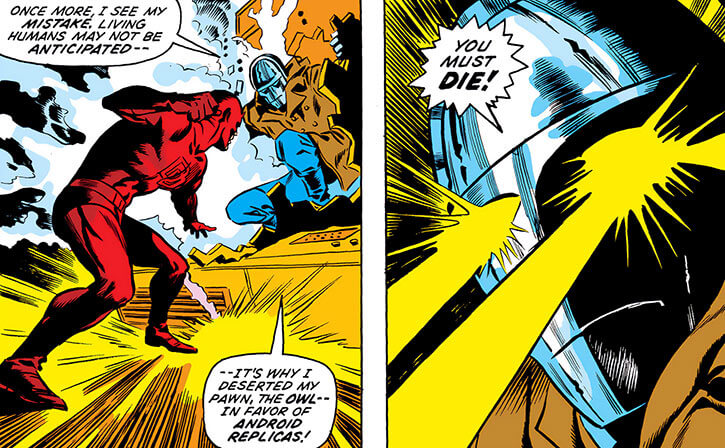 Mister Kline is a chain smoker, unlike most androids I know. He uses a short cigarette holder.

The Assassin is a strange cross between :

He eventually decided to build robots rather than use human criminals such as the Owl. That was due to the unreliable and unpredictable nature of humans.

Kline seems to have a near-religious reverence toward Baal. When Baal was pleased with his successes and told Kline he was no longer a mere android but could bear the title of the Assassin, Kline did so with enormous pride. 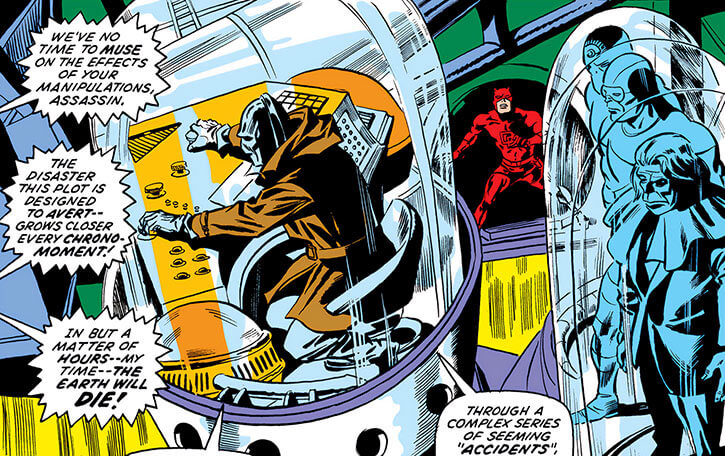 “You won’t make the Owl’s mistake —! You shall stay true and faithful — and obey — the law of Kline !”

“I’m afraid that thought is academic, Nelson… you can’t… and as long as you’re mine, you’ll never think on your own again. From this day forth — you are an agent of the Assassin !”

“Soon, the very shape of our future world will be changed, master… and the history that will make you the sole occupant of the Earth twelve thousand years from this date will be destroyed !”

“Speak all you will ! It was that kind of useless talk which caused the end of the human race. When men should have thought, the only spoke ; when they should have acted, they only wailed !”

“Your flight us useless ! Baal is supreme — and the Assassin is Baal’s sole and perfect agent !”

“The time for Stark to be removed — has now arrived. So speaks Kline. So speaks the Assassin ! Aye ! Now stands the master revealed. Indeed, I am an android — and the truest irony is yet to be given you, Mikas. Prepare yourself — and them — for the hour of Doomprayer !”

The obscure Professor Menace, a early 1960s Wonder Woman and JLA foe, could be used as the base for a DCU version of the Assassin.

Menace already has robot duplicates of contemporary villains that could be used. For instance Mikas the Soulfather could be an evolution on his Doctor Destiny android duplicate, based on whom Doctor Destiny will become decades later.

His 1960s forays against the Amazing Amazon and her friends as “Professor Menace” could have been but a stepping stone toward a more complex plan during the 1970s as Mister Kline, based on the Marvel story and targeting Wonder Woman and Aquaman, or something along those lines. 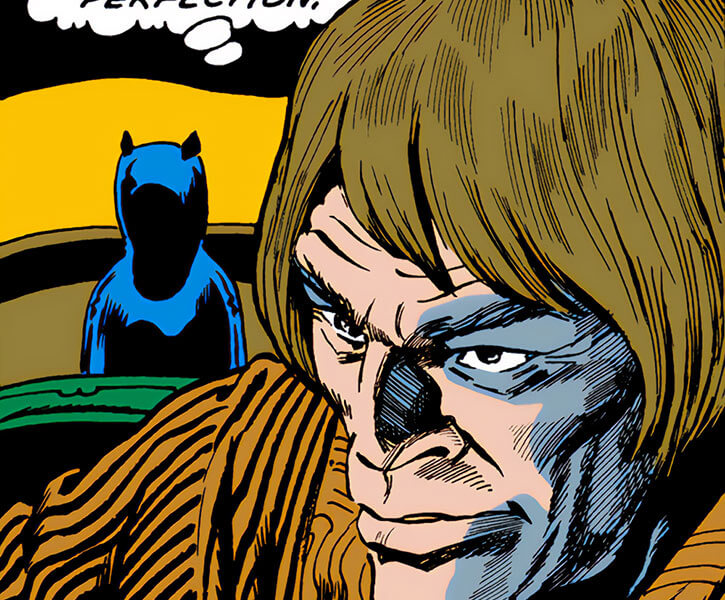 Distinct Appearance (though he can disguise himself), MPI.

Mister Kline developed experimental remote mind control technology. This research did not quite work, but could send visions and images to the brain of people many miles distant.

Those visions were too obviously unreal to have any APs in Illusion, but could be used to make people doubt their sanity and as psychological warfare.

Mind control prototype ● 2 points ● Descriptor: Technology, psychotronicsElectronic equipment that amplify or protect from psychic powers.
Feature 2 (This research did not quite work, but could send visions and images to the brain of people many miles distant. Those visions were too obviously unreal to have Ranks in Illusion, but could be used to make people doubt their sanity and as psychological warfare.)

Helper(s): Darci. It’s an unclear time travel story, so the chronology and storyline are hard to pin down. I’ve therefore used the official ones appearing in the Marvel Legacy 1970s Handbook.