Mr. Monster has spent his life obsessively training for his profession. He’s a devastating, if somewhat undisciplined fighter, especially well-versed in the use of heavy weapons. The heavier, the better. :}

He’s also a genius gadgeteer , with an eye towards gadgets meant to destroy/restrain supernatural creatures.

“Raised in the Crystal Caverns of Tibet by the mysterious Fluorescent Five, Doc Stearn (alias Mr. Monster) employs their forbidden knowledge to track down the forces of evil… AND DESTROY THEM !”

(Actually, I’m ashamed to admit I only have the Eclipse issues of Mr. M’s book. I missed out on the Dark Horse issues, which I’m told have a much more extensive history of the Stearn Family, and Doc in particular. Anyone out there have those issues and want to help me out here ?)

Mr Monster is a big, broad-shouldered, heavily-muscled (think Megaton Man !) gent in his mid-30s. He has wavy blonde hair and severe facial features, including a sharp hawk like nose.

His uniform is mostly red, with black leather boots and matching belt, white gloves, blue trunks, and a black cowl. The cowl has built-in metallic goggles and a fin on top.

The belt has two large ’M‘ symbols on the front, and a stylized fanged skull symbol adorns his chest.

Mr. Monster is a sort of multiple personality. He’s usually very calm and dispassionate, if not downright icy. He’s a strict rationalist, forever searching for the ’logic‘ and ’scientific rationale‘ behind the bizarre creatures he encounters. But put him face-to-face with those creatures and all that goes out the window !

In combat, he comes on like The Punisher on PCP, lashing out at his foes with single-minded and implacable rage, and usually doing serious collateral damage in the process.

“Science is our only beacon in a world of doubt and shadows ! Only by using Science can we come to understand the seeming ’supernatural‘ horrors that beset us. In this way, we drive back the frontiers of ignorance and help Humanity grasp the essential nature of its own dark animus. Surely, there can be no greater satisfaction than this. Now… Let’s get out there and BLAST THOSE SUBHUMAN VERMIN TO BLOODY GOBBETS !!!”

Hey, go right ahead. In a universe that’s home to both John Constantine *and* Stanley and his Monster, a guy who’s conceptually about halfway between the two should fit right in. Personally, I think a crossover with Batman, done by Gilbert with tongue firmly in cheek would be a hoot ! :}

Equipment:
Though he seems to have the right gadget for every foe or occasion, the items Mr. Monster *always* keeps on him are the night-vision goggles built into the cowl of his uniform, and his trusty twin .45 automatics (with optional silver and wooden clips, natch !).

Kelly is Mr. Monster’s gorgeous, long-suffering assistant. She is much less obsessive and considerably more capable in some areas than he is. 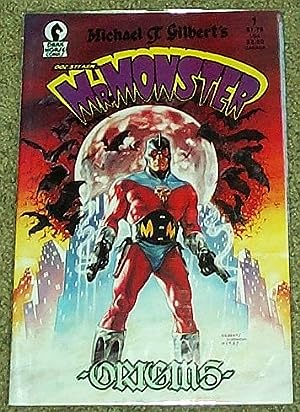