Mr. Originality has the unusual ability to switch places with another person, provided he has a bit of their hair or other body part in his possession. Whenever he needs to make a quick getaway, he teleports to some other location, leaving a confused innocent bystander in his place.

Other than his power, he has no particular combat skills.

In 1975, an unnamed hairdresser discovered that he had unusual teleportation abilities. Whether this power is a late-blooming mutation, or the results of some scientific accident is unrevealed.

He collected hair samples from the customers at his salon and began a crime spree. He would use his powers to escape the police, leaving a confused customer in his place. Impressed by the crook’s original gimmick, the Flash nicknamed him “Mr. Originality”.

Unfortunately for Mr. O, one of his customers was Flash’s alter ego, Barry Allen. Once Flash figured out how the teleport gimmick worked, he waited for Mr. O to pull out a sample of Barry’s hair. Then he super-sped his way to Central City jail… when the two changed places, Mr. O was caught !

Mr. Originality is a man of average height and build. He has wavy black hair, with a narrow white streak in front.

When he fought Flash, he was wearing a purple turtleneck sweater and green slacks.

Despite his “original” power, Mr. O is a pretty generic thug, and not a particularly bright one at that. No plans or ambitions beyond making himself rich. 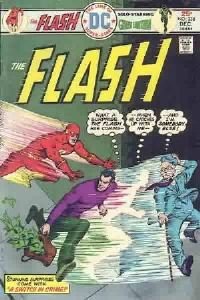