Sinister is a very powerful telepath capable of:

He also has some telekinetic abilities enabling him to project a force field around himself.

His power is so great, in fact, that he’s the top telepath of Earth in certain areas and techniques involving manipulation.

Despite all this power, Sinister’s true might is his mind and scientific knowledge. He’s capable of incredible scientific feats and is, without a doubt, one of the greatest authorities on genetics and mutations, on the planet. He is a master of cloning and regularly makes back-ups of any powerful henchmen he may employ.

Also, his aura instills fear and loyalty in his underlings. After more than a century of planning, Sinister’s ability as a mastermind has very few peers.

Unlike other telepaths, Sinister is also physically a powerful being; he’s exceptionally fast, strong and tough. His resilience not only makes him hard, but he can completely ignore large damage to his being, such as having a large hole blown straight through his head. His mutation also makes him virtually immune towards aging, meaning he literally has all the time in the world.

Sinister does seem to have a weak point, though. He might be vulnerable towards Cyclops’ optic blasts, although this has not been confirmed.

Nathaniel Essex was a 19th-century scientist obsessed with Darwin’s theory of evolution. While pursuing his own research, he discovered that humanity was undergoing increasing mutation. He came into contact with Apocalypse, accidentally educating that ancient mutant about the facts surrounding his nature.

The two subsequently formed an alliance, during which Apocalypse using his advanced technology to activate dormant mutant traits within Nathaniel, transforming him into Sinister.

For over a century, Sinister and Apocalypse laid the foundation for the final stage of Apocalypse’s plan to plunge the entire world into a war of survival of the fittest. For decades, Nathaniel performed experiments in secret, using an orphanage where he secretly observed the development of mutant children as they grew.

He cruelly manipulated their childhood developmental processes and even tried to control their adult lives so they might become his minions. The hero Cyclops may have been among his subjects. It was from here that many evils issued, including the Marauders’ assault on the Morlocks (’The Mutant Massacre‘).

Sinister is obsessed with the Summers genetic line, including Cyclops, Havok, Cable, and Nate Grey, who was created by an alternate reality version of Sinister. At present, Sinister continues to advance his master plan to serve Apocalypse and his own evil ends.

Sinister radiates evil and power from his persona. His physically powerful and impressively built body is entirely covered by his armor, except for his face. The armor appears to be made of layers of dark-blue metal wrappings. He wears classic purple boots covering his entire legs up to his thighs. Around the waist is a thick, blood-red belt.

On his forehead he wears a blood-red, quadratic gem and this same shape and color can be found on his chest armor.

He wears a strange, black cloak which covers his head from the sides and the back (with interior in red). The cloak itself consists of long black stripes hanging voluminously around all the way down to the ground. Additionally, he wears a pair of dark-blue gloves and dark-blue shoulder pads.

Sinister is often seen with a sinister facial expression that shows no emotions whatsoever. All in all, the man has an aura of authority, influence, importance and power around him.

Sinister is a ruthless man who has no compunctions about ruining the lives of others to get what he wants. He prefers to operate in the shadows, letting lackeys and unsuspecting dupes do his dirty work. He is arrogant, confident, and expects total obedience from his underlings. Thus he rules the Marauders with an absolute stranglehold.

In case a henchman dies (perhaps even by Sinister’s own hand as punishment for disobedience of failure) he/she can always be cloned back into existence. Therefore, Sinister ruthlessly has access to a near-infinite number of super-powered assassins and henchmen. It is said that Sinister possesses the greatest database in the world on mutants and that he even has genetic samples of most of them. 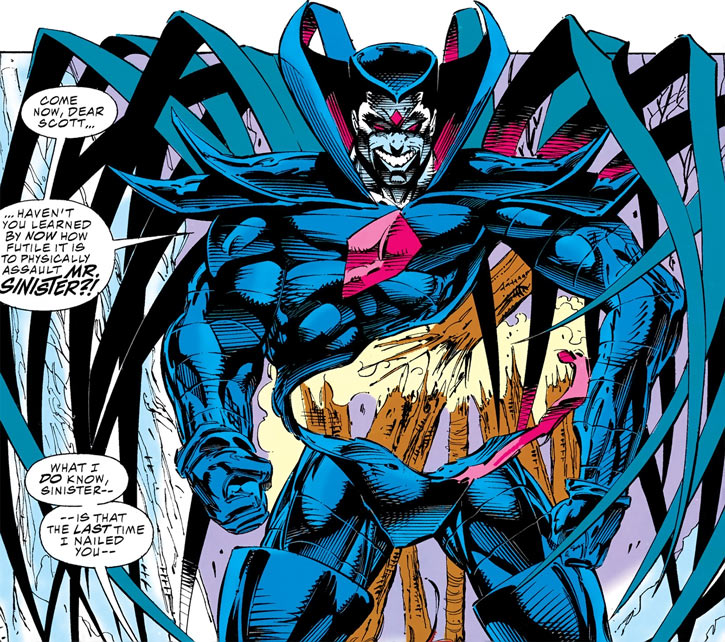 Sinister’s driving force is his fanatic fascination for genetics. This has developed into two main sub goals; studying the unusual Summers genetic line (Cyclops, Havok, Cable, Nate Grey and, probably unknown to Sinister, Corsair) and advancing human- and mutant kind towards a war for survival of the fittest.

All of his plans will therefore include the acquisition of genetic samples, opportunities for brain-washing etc.

Given that he’s a fanatic believer of Darwin’s theories, he lives by the survival of the fittest theorem. He, for example, ’culled out‘ the weakest mutants by attacking the Morlock society. Those that survived, including Caliban and more, are generally worthy of survival and won’t be attacked again…. that is, until next time they cross his plans.

Only those X-Men that are willing to kill and fight on courageously even against impossible odds are worthy in his eyes (these would include Wolverine, Bishop, Rogue and Gambit).

One should not forget that his plans are very elaborate, on many levels, and there’s much more behind the apparent mayhem than one might be led to think. His speech also, using certain sentences and phrases, bears a slight notice of classic English.

Like all good masterminds, Sinister loves to gloat. Ultimately, all of Sinister’s plans shall lead to one goal only: the conquering and ruling of a world filled with powerful individuals.

“What a sinister turn of events this is, eh ?”

“Do not be overly upset by my machinations, children of Xavier, but it was I who abducted you friends. And now my part in this mad game concludes…”

“Curse Stryfe’s blood ! I was promised the Summers’ family genetic material ! Hmmph. Should I be surprised ? It was to be expected. We proceed, as ever, onwards, towards tomorrow.”

Lacking “mutants” in the DC Universe (there are only a few), Nathaniel Essex would have spent the last century or so experimenting on aliens and what would eventually become known as “metahumans.” Of particular interest to him were Hugo Danner and his son Arnold Munro, Adam “Captain Comet” Blake, and, later, a starship that crash landed in Smallville, Kansas.

The last proved quite frustrating, as nearly the entire farming community had already been subverted by a foreign influence. Sinister’s interests, instead of mutants or metahumans, might also be turned to the various alien heroes and villains populating the Earth; these are often powerful, have exotic abilities and are numerous.

Meanwhile, as the decades passed, Essex, now known as Mr. Sinister, grew his organization across the planet, and actively controlled myriad plots against so-called superheroes and supervillains from far behind the scenes.

Eventually, the cargo that landed in Kansas was identified as the new hero Superman, and Sinister sent a great many assassins and bounty hunters to bring back enough of the Man of Steel to find out what made him tick.

Sinister’s plans were put on hold, however, when he was recruited by the being known only as the Monitor. Sinister was originally empowered by Apocalypse, but jumped at the opportunity of working with a more powerful ally.

For well over a year, in the employ of that greatly powerful being, Sinister used his organization to supply thousands of villains on many worlds with high-tech weapons in a plot to select the strongest heroes the universe had to offer to fight the impending Crisis.

As a sidenote, the Crisis should really fit Apocalypse’s agenda greatly; only the strong survive, if even that. Perhaps Apocalypse also joined up with the Anti-Monitor, or tried to lead that coalition of supervillains.

Not long afterwards, his cover blown, Sinister left Earth for parts unknown, eventually coming upon the Psion Homeworld in the Vegan System. Describing the high variation of “metahumanity,” Sinister caught the interest of the Psions, who brought him before the Dominators.

Sinister convinced the Dominators of the “sure danger” posed by Earth to their stability, and proposed a multilateral invasion of his own homeworld.

Over time, and in charge of the “Starlag” space station, Sinister was able to “releverage” the Invasion! from one of destruction to one of control, thus providing him with ever more subject…until the Daxamites pulled out of, and then shattered, the alliance.

But, in the meantime, for the purpose of gaining even more samples, Sinister developed the “genebomb” for the Dominion and, when the Alliance was in its final stages of collapse, coerced a “rogue” Dominator to take it into Earth orbit and detonate it.

In one future timeline, Sinister exploited the technology he acquired through the Alliance to kill hundreds of metahumans, and eventually came to rule the Earth as Monarch. This timeline, however, proved to be highly improbable (wink), and thus unstable. To strengthen the probabilities, Sinister concluded that the heroes of Earth could be set at each other.

Thus a faux-renegade laboratory empowered Matthew Ryder with the ability to traverse the timestream, and planted the idea in the young man’s head that Monarch had once been a hero. Predictably, Ryder, now known as Waverider, “escaped” into the past and announced to the world that one of its prominent heroes would one day turn rogue and kill the rest.

The plot failed, for the most part, but both Hank “Hawk” Hall and Nathaniel “Captain Atom” Adam were subject to more than a little suspicion from their peers.

However, Waverider, unknown even to himself, passed a message from the future to the modern-day Sinister, who returns from time to time to suggest (through planted “clues” and whispers in the right ears) that they still might, one day, become Monarch and kill their friends and allies.

In a 30th century (though which timeline leads there is unclear), the Giffen/Bierbaum Legion, to be specific, Sinister has returned to work for the Dominion. After centuries of planting doomsday devices to increase tension among humans, he was given clearance to create the “Batch SW6” Legionnaires, and subsequently destroyed the Earth to watch the results.

The status of Sinister’s Attack Vulnerability towards Cyclops’s Optic Blasts is unknown. The vulnerability may have been a hoax by Sinister or then Cyclops attacked a faulty clone of Sinister.

Whatever the case, Sinister can seemingly negate this drawback, and then supposedly by wearing a special suit. Whenever he wears such a suit, his Attack Vulnerability is completely negated and he defends as normal against all attacks.

Since such an armor is not always worn One might assume that it is very cumbersome to wear or that its effects are hard to prepare; in Game Terms it is a Marginal ability. Sinister may, at any time, negate his Attack Vulnerability by paying a fee of 10 HPs so that he happens to wear such a special protective armor for the duration of that adventure.

Should it be revealed, in future comics, that Sinister never has had such a vulnerability, the GM should simply delete the above Attack Vulnerability.

INT raised to 12 APs (this assumes that Apocalypse is really an INT 11 ; Sinister appears to be Apocalypse’s superior and one of Marvel’s greatest criminal masterminds, plus he’s the Marvel equivalent of Anton Arcane), Hypnotism raised to 15 APs (one AP above Dr. Tzin-tzin & Professor Xavier) and Extended DC Universe section added. 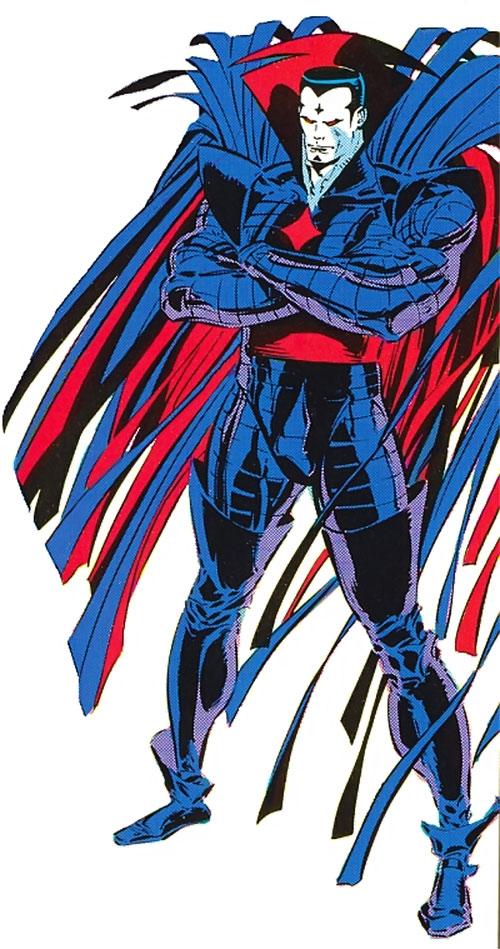 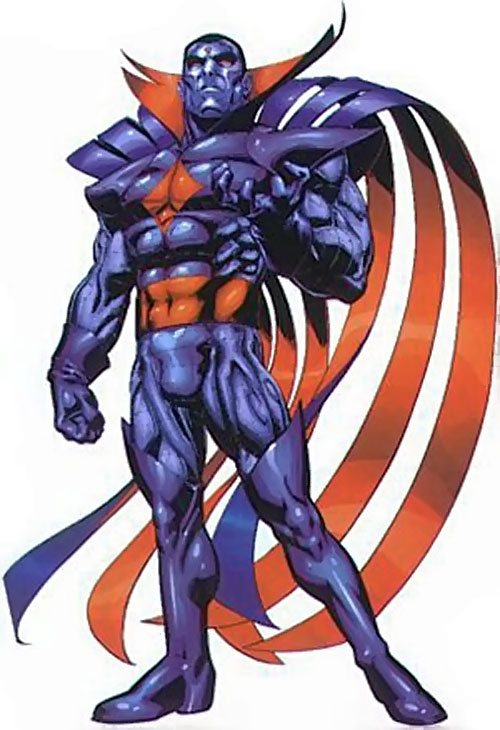 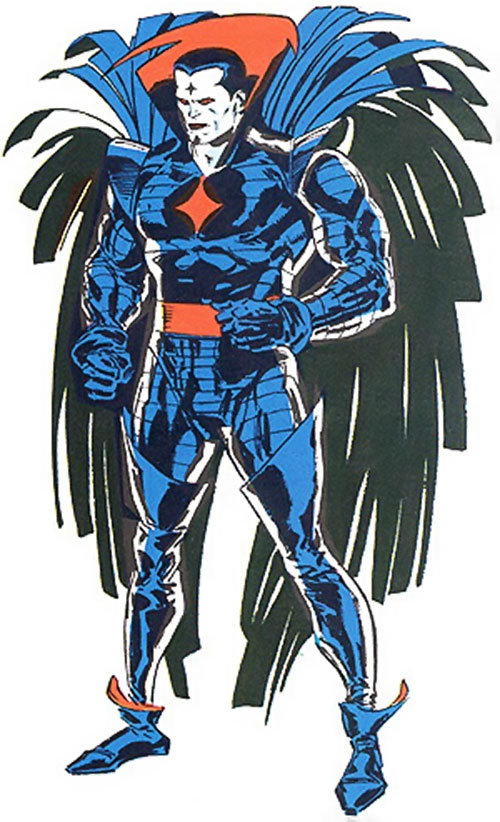 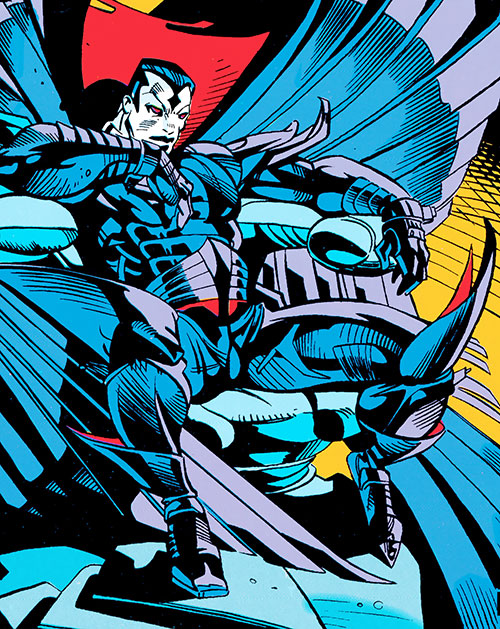 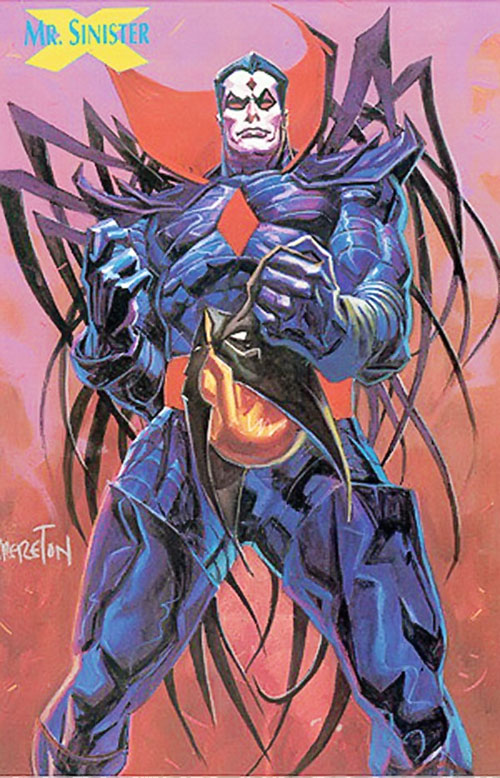