An obscure but curious 1941 super-villain, from Fawcett Comics.

He’s a big (but slender) tough guy. Bullets simply bounce off of him.

He also has a cadre of goons.

He sends a thug to assassinate the president. The thug fails, and is tracked by Minute Man to a gathering of thugs. Minute Man beats them all up, then returns to General Milton, who is missing, having been kidnapped (he is told) by Mr. Skeleton.

Elsewhere, Mr. Skeleton has kidnapped various military leaders. First, Mr. Skeleton dips the thug that failed to assassinate the president into the Skeleton Bath, killing him. Minute Man arrives (how he found his way there is not explained), and Mr. Skeleton sends a group of thugs to fight Minute Man.

During the fray, Mr. Skeleton tries to dip General Milton, but Minute Man saves him.

Minute Man battles Mr. Skeleton for a while, until Mr. Skeleton threatens to turn over the tank of acid. Minute Man grabs Milton and leaps through a window to escape. Minute Man then rushes back inside, to discover that the other military leaders have been reduced to skeletons.

Later, at General Milton’s army camp, Mr. Skeleton arrives and easily deals with the soldiers stationed there, until Minute Man arrives. The two battle for a while, until Mr. Skeleton wins.

Believing Minute Man dead, Mr. Skeleton grabs General Milton and another general. Minute Man recovers, finds Mr. Skeleton, and beats him up, swinging him around and hurling him against the ground. Mr. Skeleton explodes rather unconvincingly into a pile of bones topped with his head.

This is about as realistic as all of those Mortal Kombat fatalities where endless body parts fly out of a victim… you know, six arms, three rib cages, etc.). Here the lack of realism is not a matter of numbers, but of the shape of the pieces. One leg bone has a normal foot attached to it even.

I think that Mr. Skeleton must be a mystically constructed entity, and if he were to be reassembled, he could reform. In DC Heroes RPG terms, this would mean Mr. Skeleton has Invulnerability with certain Limitations.

His normal-sized (proportionally) feet, hands, and head therefore look strangely out of place. His round bald head is comical, with small round eyes, a barely formed nose, a fanged mouth, and oversized ears. His skin is bone-white.

The only clothes that Mr. Skeleton wears include: briefs, a cape, and a short, sleeve-less (halter top ?) shirt.

In the post-Crisis Universe, Mr. Skeleton would undoubtedly have remained a Minute Man foe.

Bonuses and Limitations:
Growth is Always On and is reflected in the above stats in the following way: STR and BODY (not just RV) have been increased from 1 to 10. Furthermore, Mr. Skeleton’s OV should be reduced by 4 during combat.

Advantages:
HQ (confined: inside of a building somewhere).

Equipment:
Skeleton Bath [BODY 05, Acid: 11, Limit : Acid only works on flesh. This is a cauldron full of acid into which victims are dipped by means of a rope. The result is to turn the victim into a skeleton]. 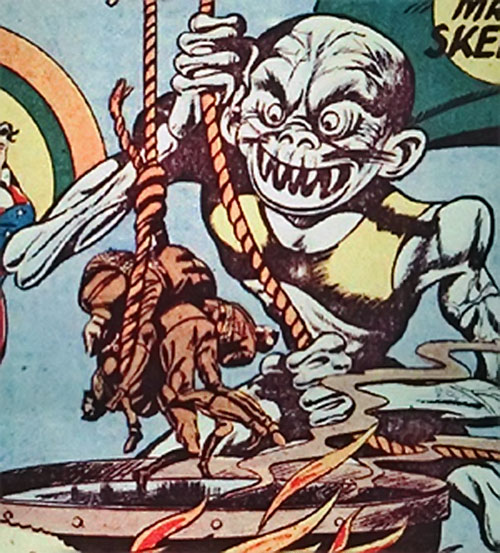