Mr. Terrific is a world class athlete and was one of the world’s leading electronics expert. He holds a Gold Medal in the Decathlon and is a skilled martial artist.

But his true power lies in his genius-level intellect. He holds doctorates in several fields.

Michael Holt’s wife Paula had died in a car accident and “all the money [he’d] made, the achievements in sports and science” were worth “nothing without her.”

Suicidal, Michael had just destroyed a picture of his wife by dropping it unto a train that was passing underneath the bridge he was on, when three young gang initiates approached him and demanded his money.

Before things can get ugly, Jim Corrigan appears, gets shot through, and scares them off by transforming into the Spectre, an act for which Michael declares, “I suppose I should thank you for saving my life. On the other hand, I’m not so sure I want to live. I guess I’m lucky you came by.”

Spectre tells him, “It was not luck, Michael Holt. I was drawn by your thoughts. Self-murder is still murder. And murder is the province of the Spectre.”

After he shifts into his human form again, Corrigan tells him, “You remind me of another acquaintance… a friend I once had.” The undead detective then relates the story of how a bored Terry Sloane became Mr. Terrific to set an example of Fair Play for neighborhood kids.

The story finished, Michael declares “Amazing. In every sense of the word… I’m not stupid. You’ve told me this for a reason but I’m not seeing it”.

To which Corrigan replies “You feel the void that your wife has left… Mr. Terrific served a purpose and that purpose isn’t filled by Superman or Batman or even the Spectre. He worked at the street level. He reached kids who might otherwise have gone bad. He replaced “gansta” role models with one that stressed “fair play.” There is a need for that kind of hero today, get me? Maybe if you fill that void that’s out there, you can ease the one that’s inside you.”

Later, on a basketball court, when the three grade-school gang initiates are about to get beaten up by their three handlers for failing to bring back any money, an African-American [a small lightning design shaved into the hair above his forehead, wearing blue jeans, dark boots, a red sweater, studded leather gloves that leave his fingers exposed with a green letter “T” on their backs, a brown leather jacket with zippered pockets on the front, and the words “Fair Play” printed on an upside-down version of Terry Sloane’s yellow stomach emblem on the back, and wrap-around sunglasses] appears holding a basketball to challenge them.

“You can call me Mr. Terrific—‘cause that’s what I am,” he says. The streets are “mine now.”

In sight of the three boys who had earlier tried to rob Michael Holt, Mr. Terrific flattens bat-wielding Lobobo with a kick to the face. Doctah slipped behind Mr. Terrific and aimed a gun at the back of his head. Mr. Terrific whirls around and slams his basketball into Doctah’s face at the same time he pulls the gun out of Doctah’s hand, saying “I’m not afraid to die, so I’m not afraid of you.”

The fight suddenly ended, Mr. Terrific dribbles a few times and throws a three-point swish as the kids he’d just saved ask him if he has any superpowers. ”Don’t need ’em.” he says, “I’m just cool.”

While working at Tyler Chemical (as a security consultant in exchange for Tyler funding a youth hostel), Mr. Terrific came into contact with JSA members Sand and Hourman III. He was extremely impressed with the team, and when Sand invited him to join, he agreed. He was recently elected leader of the JSA after Sand and Hawkman came into friction with each other.

Mr. Terrific is a tall, well-built black man. He wears a blue and white uniform with red trim. The sleeves of his jacket have the words “Fair Play” written up the sleeves. His mask is a large, black “T” mask on his face, obscuring his eyes (though he can still see).

Micheal Holt is dedicated and determined. Though he is haunted by the memories of his deceased wife, his mission to improve the quality of life in the inner city has improved his demeanor.

When fighting, he will often let loose a barrage of quips and one-liners. When in a lab or hospital, however, he is completely professional, and focuses on getting the job done.

Drawbacks:
Guilt (his wife’s death — until he confronted her ghost), Secret Identity. 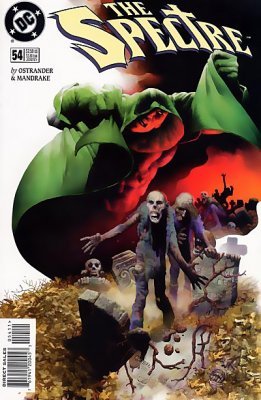 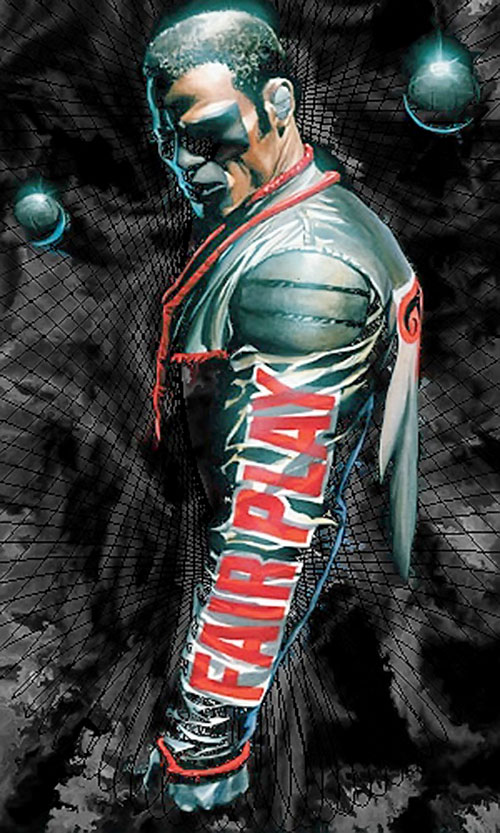 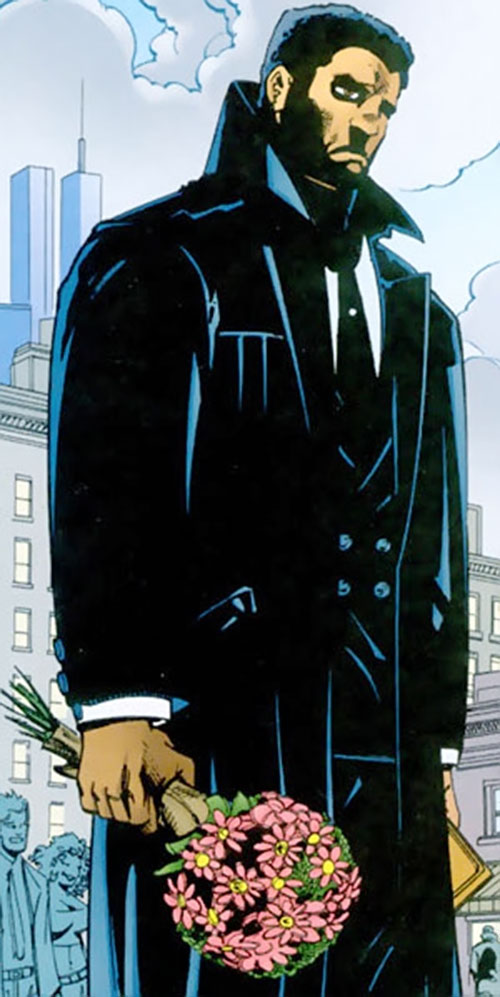 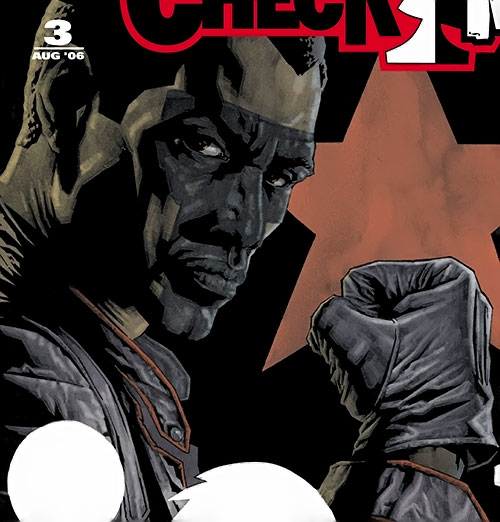