Mr. Whisper was the nightmarish villain of Gothic, a 1990 Batman story written by Grant Morrison. He is an immortal, unkillable Satan worshipper.

His strength is superhuman – he can break bricks and bones with his bare hands.

He’s also a smart, highly charismatic and authoritative-looking figure with centuries of experience with murder and deception. His talents are presumably numerous, and he demonstrated enough architectural skill to design a cathedral and supervise its construction.

He’s also a skilled occultist, and knew enough biology and chemistry to brew a deadly plague using infected corpses. He excels at demolitions and assassination.

He cannot be killed, as his body will keep magically fixing itself. Even with massive damage he’s unlikely to lay still for more than 30 seconds or so.

Mr. Whisper pretty much ignores bullets, knives, ordinary flames, and other assaults that do not destroy large chunks of tissues at once. It is possible to keep him down, but that requires constantly butchering him with an axe or somesuch.

He doesn’t age, either.

Mr. Whisper’s soul is trapped in a magic cord, which he then hid from man and Satan. As a side-effect of this ritual, he doesn’t cast a shadow.

During the late XVIIth century, Brother Manfred was a Capuchin monk  in Austria.

Beginning in 1679, the area was ravaged for several years by the Great Plague of Vienna , a major bubonic plague outbreak. But the monastery escaped contagion all through the 1680s.

Brother Manfred was admired for his faith and virtue, making this charismatic man of the cloth the de facto leader of the monastery.

A novitiate came to him to confess that he was an heretic, secretly following a cult of sin. As it happened, it was Manfred who followed the strange youth into heresy, and convinced the entire monastery to join him.

For years the monastery was a kind of Hell, worshipping sin. Unsuspecting travelling nuns were captured, and the youngest was eventually burnt at stake in sacrifice.

In 1690 Manfred discovered signs of the Black Plague on his body. In desperation made a Faustian deal – trading his soul for healing and 300 years of immortality. The Devil took the deal, further reinforcing Manfred’s aura.

Some months later, the (fictional) River Dess flooded the valley, destroying the monastery and killing all monks. Manfred, however, couldn’t be killed for more than an instant and came back from the depths.

The Drowned Monastery of Lake Dess remained a high point of local folklore, with tales of undead monks forever crewing a black ship – or of the burnt nun’s ghost haunting the ruins and searching for her tormentors. It is still standing, the tall fortifications and towers emerging from the lake. 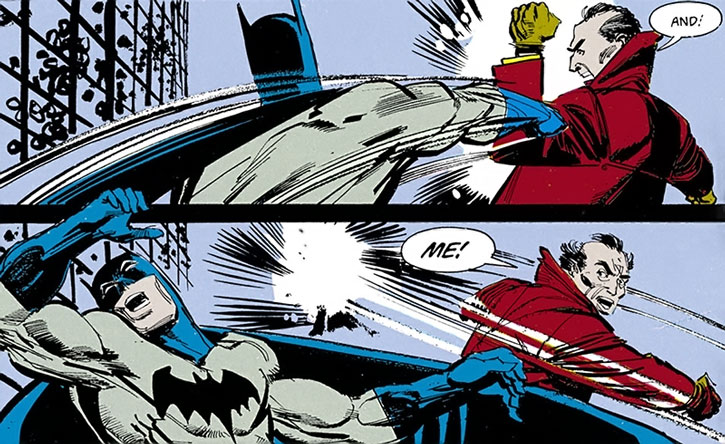 The infernal monk came up with a plan. He kept a host of corpses of plague victims, and studied sacred architecture.

The plan was to use the bodies to recreate the Black Plague, and have it released within a specially-built cathedral. The structure would act like a massive soul trap, capable of capturing the souls of plague victims as they died in town – which he could then offer to the Devil to lift the 300 years limit.

Manfred spent decades in England, where he perfected his architectural talents – and continued his cult of murder, torture and other sins. He then left for the United States, where there were still opportunities to build cathedrals, and arrived in Gotham Town in 1760.

He was the architect of the Gotham Cathedral, which was complete in 1790.

Manfred also used a magical cord to measure his shadow, trapping his soul and his shadow within it. He then hid the cord and his plague vials within the cathedral, to protect them from Satan.

The ex-monk remained in the area, as numerous human sacrifices were needed to fully enchant the cathedral. He slew hundreds of kids over the decades.

By the 1960s he was working as a teacher in a large, English-style private school. The entire place was debased and a number of children were abused and/or killed.

Bruce Wayne was briefly placed there, and met Brother Manfred as “Mister Winchester”.

”Winchester” beat Wayne, and his father came to the school, immediately taking little Bruce back home after he intuited “Winchester”’s nature. A scandal about the school soon erupted, but the practiced “Mr. Winchester” slinked away in time.

In 1970, at least 7 children went missing in Gotham City. The police heat was making it impossible for the underworld to function, and 5 young made men decided to find and kill the maniac – which the press had apparently named “Mister Whisper”.

Using mob methods and contacts, they found “Mister Whisper” and opened fire, but he withstood their bullets. One mobster went at him with an axe, but though the blows kept Manfred down he kept on regenerating.

The harrowed gangsters tied him to an anchor and threw him into the river. Unbeknownst to them, they saved young Bruce Wayne, who would have been Whisper’s 8th victim.

Mister Whisper eventually returned, to finish preparing his plan. On the walpurgisnacht of 1990, the bell of the cathedral would break the vials, and most Gothamites would be dead from the plague within 24 hours. The cathedral would trap about eight million souls for Manfred to barter with.

Manfred is an ordinary-looking middle-aged feller. Encroaching baldness make his hair peak on the sides in an odd way, like an understated Wolverine.

He’s a chain smoker. It’s not like the health risks matter to him.

Mr. Whisper seems to see himself as a grand figure, a man capable of facing God and the Devil to claim the immortality he’s entitled to. He sees his innumerable victims over the centuries as a necessary, grisly work that proves his courage and his willingness to get things done.

Though originally his cult of sin was about lowering himself in front of God, it seems to have become an habit for its own sake. Manfred is a creature of cruelty and sadism.

For centuries he tortured and sacrificed children to prepare the cathedrals. During that time he had a number of identities facilitating this, and ensured that he had numerous contacts about those powerful enough to avoid scandals.

As can be surmised from its title, the Gothic story made heavy use of Gothic imagery. Dreams, portents, messages from the dead, Christian themes, dark and stormy nights, macabre motifs, medieval motifs, etc.

This is not directly tied to Mr. Whisper — and in the context of the story, some of the information that allows Batman to crack the case seems to come from the Devil — but these should probably be a thing if Mr. Whisper appears in a story.

“My life’s path becomes a circle. And a circle’s forever.”

“Those atrocious rites… I… Oh, Batman, be thankful that you will die. You need never know the squalor of immortality… the bodies heaped and piled… endless…”

(To Batman) “That’s when you were plunged into the darkness. You’re still little more than a brutalised child for whom the world is all shadows and fear. I pity you. I suppose it’s a kind of hell. But don’t worry – I will deliver you.”

“Can you smell it ? The breath of the cathedral, held for centuries, turning sour in the darkness. Altar of roses and plague dust.”

Source of Character: Grant Morrison’s Gothic arc in Legends of the Dark Knight. 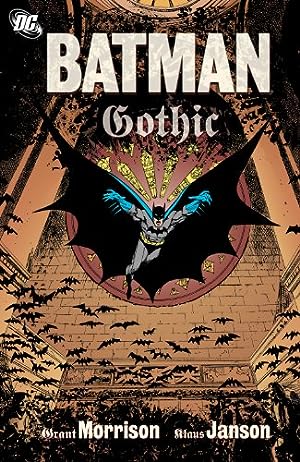 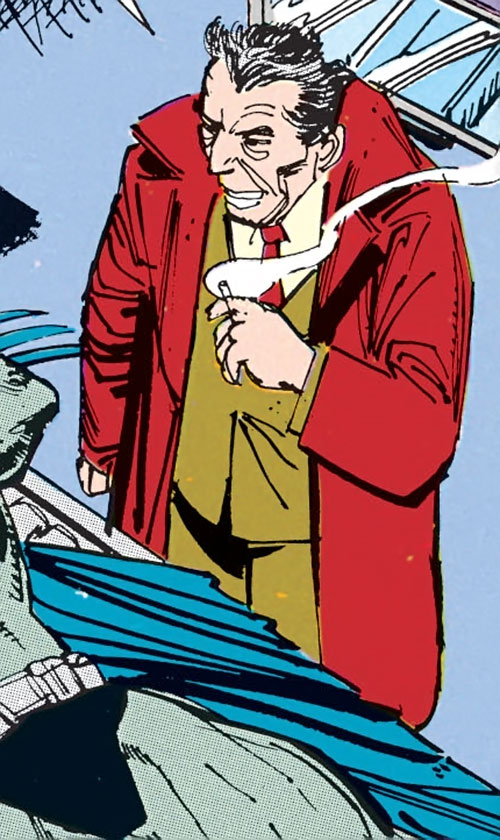