This 1990s WildStorm Comics shapechanger was part of the whole Daemonite alien conspiracy thing. If you’re not familiar with that, you should read the Daemonite species profile first, for context.

Mr White is a Daemonite with special capacities. He can assume any form, making him a perfect spy.

Furthermore, this powers allegedly allows him to overcome the lethal effects the Earth’s atmosphere has on Daemonites. So he doesn’t need, like his fellow aliens, to possess a human host to survive on Earth. Yet he never exhibited this ability, so perhaps he lost it due to lack of practice.

While he can assume the form of any persona, he can also transform into more alien lifeforms. For instance he can grow extra or specialised limbs for use in close combat.

His power to impersonate people has the possible side effect of gradually leading him to believe he is that person.

Mr. White arrived on Earth aboard the Daemonite dreadnought that crashed during the end of the prehistory. He was Defile’s brother, stuck with his powerful sibling.

Though he is obviously crazy and difficult to rein in, Defile kept Mr. White alive because of his usefulness. Defile even brought him back from the dead after he was killed by Ben Santini while impersonating Maul of the WildC.A.T.s.

Mr White was the key to Defile’s plan to pit StormWatch against the WildC.A.T.s. Defile managed to corrupt Maul’s mind to carry a nuke and bring maximum damage to the UN’s team. Meanwhile, Mr White was impersonating the giant in his superpowered team to discredit them.

Both teams were at each other’s throats when Void had the vision of the Daemonite ship’s key. With the keys resurfacing after so many years, Defile’s changed his plan to get the control of the mammoth alien vessel.

Mr White followed a company of Daemonite soldiers. The job was to grab the key Deathblow had accidentally taken as a souvenir during a mission in Nicaragua. After the former Team 7 slaughtered the Daemonites’ army, Mr. White walked in as Grifter and claimed the key. Deathblow realized his mistake when the real Grifter came in five minutes later for the same reason.

Afterward, Defile sent Mr. White with the MERCs. They were to obtain information from Georges Russell, the archeologist who was supposed to have located the ship. Unfortunately for Mr White, Russell was having a chat with Savant, who brought Mr Majestic to the rescue.

The next time we see Mr White is when Savant is in charge of the WildC.A.T.s II. This team has launched private war against super-powered crime. Mr White did well during the fight, resisting the combined assaults of Savant and Ladytron. But he then fell into a trap, prepared by TAO, during his escape. 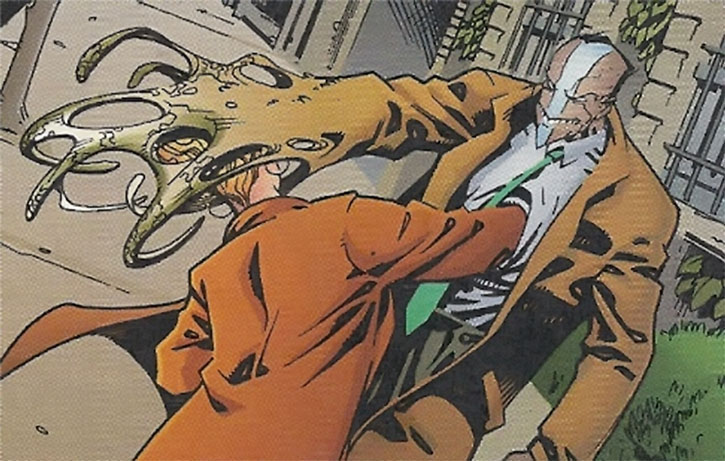 The WildCATs later expose TAO’s madness. But TAO frees Mr White and all the villains imprisoned in the Halo Building to cover his escape.

We learn much later (in WildCATs #50) that TAO convinced Mr. White to impersonate him. Thus, when Mr. Majestic thought that he executed TAO, he actually slew Mr. White.

His casual appearance, though, is that of a human being, with a white stripe in the middle of the face, and a pair of small glasses. He’s equipped with a carved walking stick that fires powerful energy blasts.

Anyway, his natural aspect is that of a Daemonite. He reverts to it when knocked out.

Mr White is unstable. He clearly has delusions of grandeur, thinking he could take all the WildCATs with the help of his powers. But the more unstable, though rare, trait is that he could come to actually believe he is the one he impersonates.

“A Kherubim lord. Fierce and powerful. I delight. A worthy foe, at last.”

Both Demise and White could be a pair of White Martians.

If Stormwatch is a part of your campaign, they would have pitted it against the Justice League. They would have a plan to acquire the Martian Manhunter’ diary, and particularly the pages where he recounts the dreams the Sandman allowed him to have during their encounter. These are of great sentimental value to Martian survivors. The plot hinged on White impersonating the Manhunter.

I treat being a Daemonite as a Drawback, as in the Wildstorm Universe the aliens can be detected as such, and some characters (like Voodoo), have powers only usable against aliens. 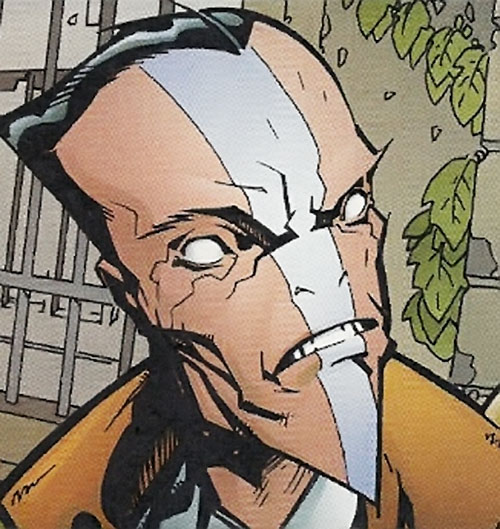 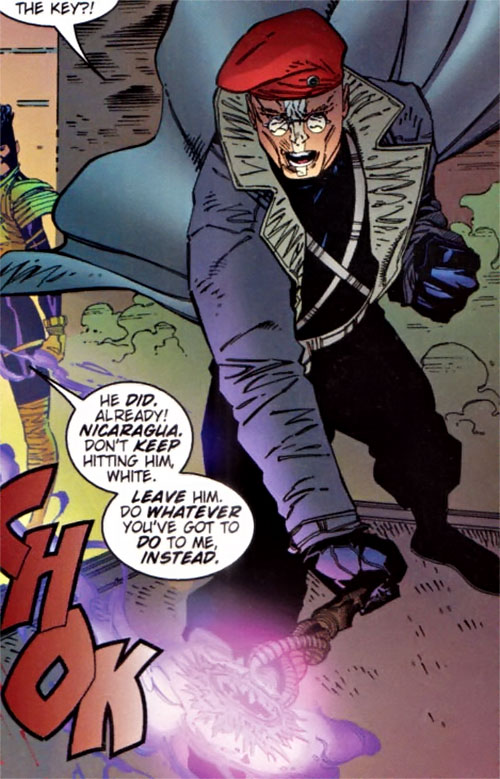