“That robbery was too neatly planned for an ordinary criminal… is Mr. Who still safely behind bars ?”
– Dr. Fate

Mister Who was a recurrent enemy of Doctor Fate during the Golden Age . He first appeared in 1941. Though he’s a useful, working character, he hasn’t been used much since.

The very first mention of Who is a pun (“Who sent you ?” “If you know, why ask me !”). It seems inevitable that this is a reference to the super-famous Abbott and Costello skit Who’s on first  (video). This skit began its undying, eternal reign of terror in a 1938 radio show.

Like the Monster, Mister Who could easily be recast as an important criminal mastermind of his day. 1940s comic book storytelling conventions do not allow him to win against Doctor Fate, but within these constraints he was meant to be a credible threat.

Mister Who invented a unique serum, called both Solution Z and the Z Solution. Once he drinks it he becomes markedly stronger, taller and healthier than the vast majority of men. He also gains a number of super-powers, and seems much younger.

Mister Who isn’t always under the effect of his serum. However, one gets the impression that he reverts to his weaker, smaller, older body for disguise purposes. Later on, it is more clearly stated that his serum has a time limit. This seems to be on the order of five hours.

Yet the Z Solution doesn’t fix his eyesight. Without his glasses, he’s terribly nearsighted in either form.

At first, it seems that the Z solution is a miraculous cure-all. In particular Mister Who stated that he could recover from any wound, up to and including losing a hand.

But it soon becomes apparent that it also allows his body to adapt to threats, manifesting powers to survive. Demonstrated abilities include :

In later appearances, Mister Who only used his growth power.

Mister Who seems to have accumulated significant wealth.

He also continues his biochemistry experiments, including improvements to his serum. For instance, keeping a buffalo-sized spider in his base is easy for him. However, after Doctor Fate arrested him, Who never had time to rebuild his power base.

He also developed a reversed form of Solution Z. This resulted in a gas that could swiftly knock out even Doctor Fate, and could have killed him.

Another variant on the Z Solution can only shrink the person who imbibes it, which lasts for hours.

Mister Who will often have a few armed gangsters with him. These are loyal toward him, and will even help him escape from prison. Unless Dr. Fate intervenes, working for Mr. Who is exceptionally lucrative. And he’ll pay even if the heist failed.

Mister Who was likely born during the late XIXth century, as he seemed to be in his 60s in 1941. One panel gives the impression that he was raised during an era of poverty. Given the endless banking panics, recessions and depressions during this era, this seems about right. 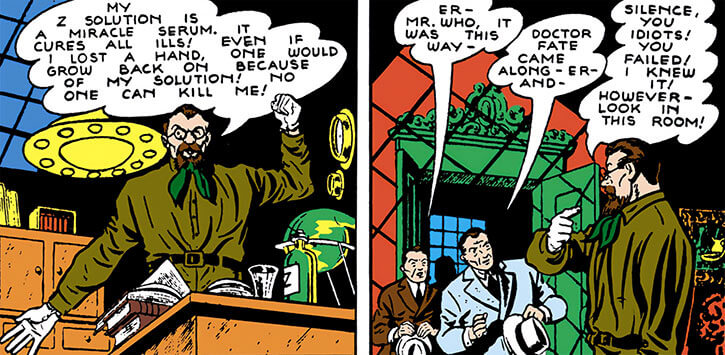 He stated that he was born a “useless cripple”. In the flashback all his limbs are present, but captions describe him as stooped and twisted. Mister Who might be been born with a muscular dystrophy . Though there are alas many other inheritable conditions that could fit the bill. On some panels, one also gets the impression that he has a damaged left eye.

As a child he made a trickle of money as a newsboy in a big city. His father reportedly beat him when he didn’t bring enough in.

I’m useless, but not for long

The lad was convinced that his path to healing and revenge laid in science. He saved enough to go to college (those were different times), where he apparently studied biochemistry. His goal was a sort of miracle cure that would make him strong, healthy, tall and at least as capable as other men.

The researcher used extracts from “crawfish and insect creatures” capable of regrowing lost limbs. It worked. His serum (“Solution Z”) could turn him into a much stronger, younger, far healthier man. He called this new identity “Mister Who”.

*Naturally*, Mister Who decided to become a crime boss, and steal beautiful objects and works of art for his personal collection.

One gets the impression that he had been at it for but a few years in 1941. But he already had a big mansion full of stuff, and solid underworld contacts to hire criminals.

The future, is coming on

In 1941, Mister Who hired a gang to steal a painting. As the gangsters feared, they were intercepted by Doctor Fate (Dr. Kent Nelson). But as they were beaten back, Mister Who sneaked in and stole the painting anyway.

Doctor Fate shadowed the thugs to locate Mister Who, but was taken down. Mister Who handed Fate over to a not-wholly-friendly giant spider before leaving, but Fate easily survived.

Dr. Fate intercepted Mr. Who right after he stole a huge diamond. Before Who could engage his growth power, Fate grabbed him and slammed him through the hull of his speedboat. Mr. Who appeared to sink to his death whilst unconscious.

However, Who reflexively grew gills and flippers. Easily surviving, he launched a new scheme to impersonate the Mayor. But Doctor Fate saw this with his crystal ball. After a series of clashes he did stop Who. The mastermind was imprisoned after Solution Z’s effects had run out. 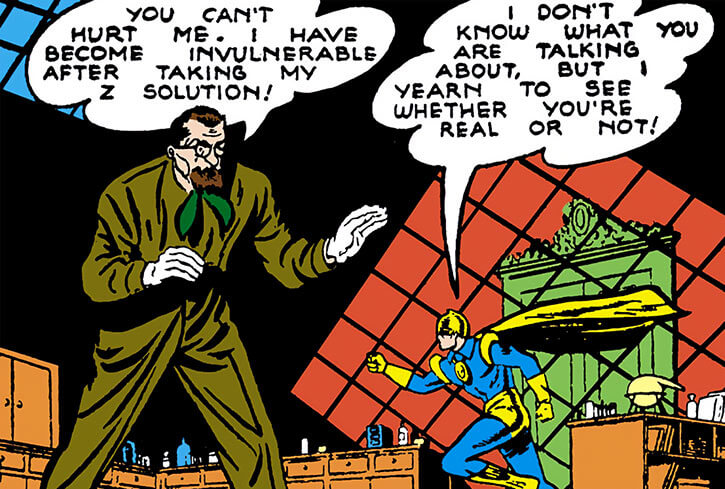 (This story ends with a curious blurb that gives the impression that Fate will now fight Who in every story. But this is not what actually happens, though he does return a few issues later.)

Mister Who promptly escaped – there was a water-soluble tablet of Solution Z hidden up his sleeve. He then attacked and nearly killed multi-millionaire “P.J. Moggan” (groan) , stealing a large sum of cash to rebuild his power base. Dr. Fate intercepted Mr. Who, but was soundly beaten back.

However, Who’s plan was later ruined by an involuntary reaction. Seeing Doctor Fate made him feel threatened and grow three metres tall, spoiling his disguise. He was again defeated by Fate.

Mister Who received letters in prison – but the paper had been soaked with a variant Solution Z. He dissolved them in water to get a dose. He also had tamed a pigeon by feeding it. Thus, he could shrink to action figure size then hang onto the pigeon as it flew away.

Using his magic ring, Fate intercepted Who before he could drive to his hideout. But Who tricked Fate into drinking a dose of the Z variant. This shrunk the hero to the size of a canary, making him powerless. But Fate escaped from his cage by provoking a cat into attacking.

Still miniaturised, Dr. Fate nevertheless ruined the next heist by Who and his gang. After Who shrunk to avoid police attention, Fate punched him out – since they were now equally small. Who escaped anyway, but hours later the shrinking effect on Fate stopped. Kent Nelson could thus arrest the dastardly criminals.

Against the aggravating All-Stars

(During the 1970s and 1980s, senior writer and editor Roy Thomas  brought back many Golden Age characters, both at Marvel and at DC. In 1985, he added a little twist. Traditional Captain Marvel enemy Mister Mind was now depicted as having been active on 1940s Earth-2 as well as Earth-S. See our “Ages of DC” article for more about Earths, and Fawcett Comics.)

In 1942, Mister Who was recruited by Mr. Mind to join the first version of his Monster Society of Evil. This was meant as an antithesis to the Justice Society of America. They even took over the JSA’s old headquarters for a few hours. Beyond Who and Mind, the members were :

They captured Hourman, Hawkgirl and Doctor Fate. However, Sandy the Golden Boy intervened in time for the heroes to escape.

The Society of Oom

The MSE then broke the Dummy out of prison, despite the Earth-2 Superman’s intervention. However, the members disliked Mind’s alien logic. They mutinied to focus on more grounded and lucrative plans.

But Oom immediately took over as leader, being far mightier than even Who.

Oom insisted upon storming the Perisphere – the All-Star Squadron’s base. Mr. Who grew to King Kong size and ripped the Perisphere from its moorings.

However, he was soon taken down by Green Lantern (Alan Scott), the Flash (Jay Garrick) and the Amazing Man (Will Everett). Yet he likely escaped, as the Crisis on Infinite Earths reached Earth-2 just at that point.

In 2005, Alexander Luthor, Jr. founded a new version of the Secret Society of Super-Villains. It had over 500 members, and was simply called the Society. As part of Luthor’s plan, the entire Society invaded Metropolis. This resulted in a gigantic super-battle.

In the fray, a man who *may* have been Mister Who gets blasted by Lady Quark. However, this identification is, at best, a long shot. He’s only seen from the back, though it generally fits and he’s bespectacled.

For some reason he prefers wearing white gloves (which oddly became violet in a 1973 reprint). Perhaps he thinks they make him look upper class. When outdoors he’ll have a broad-brimmed hat and a short cloak.

Woo’s on first, Watt’s on second…

In Who’s very first appearance, one gets the impression that he has a missing or damage left eye. Or perhaps a collapsed eyelid or somesuch. In subsequent appearances, this is not the case.

One can imagine that Who has a muscular condition, that the earliest version of Solution Z weren’t thorough enough to restore damaged muscles around one eye, and that subsequent formulations fixed even that.

Likewise, some versions of the Z Solution make his hair brown again, whereas others leave it white.

Mister Who is an overbearing, overconfident man secure in his power and intelligence. He makes a big show of appearing super-confident, which might easily make his enemies hesitate.

However, one gets the impression that he’s actually overcompensating. And as Dr. Fate keeps defeating him, Who visibly starts fearing him.

He is undeniably smart and good planner. Yet his overconfidence perpetually undoes him. In particular, he never checks his kills.

“Why shouldn’t I be cool ? Nothing can happen to me !”

“That’s the trouble with you boys – all you think of is rough stuff ! There’s more money in doing things cleverly, and that’s just what I am !”

“By Gadfrey, Superman is even more indestructible than Dr. Fate !”

Drawbacks:
Alter-Ego (His older, weaker form), SIA toward Overconfidence, MPR (might involuntarily engage some APs of Growth if he feels threatened whilst his serum is active – roll MIN/MIN against an AV/OV of 05/05), MPR (very nearsighted).

Mister Who usually uses 7 APs of Growth, assuming a sufficiently large room (like a ballroom).

More APs can be used outdoors, but come with problems to see small objects, to manoeuvre, etc.

Mister Who only ever uses these assets once, but here are quick notes :

For benchmarking purposes, I’m using the Dr. Fate stats in Mayfair’s World at War . Which, incidentally, were clarified in Magic  with an important note about the Telekinesis APs. 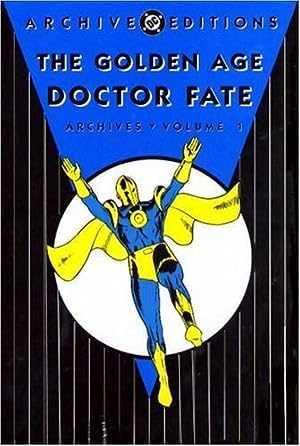 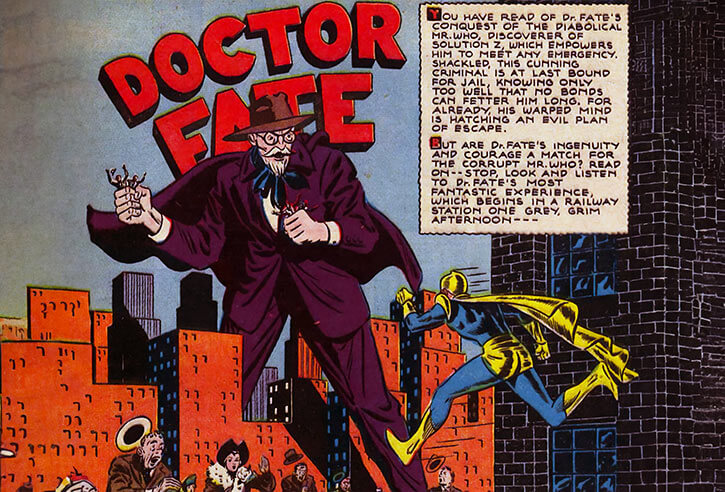 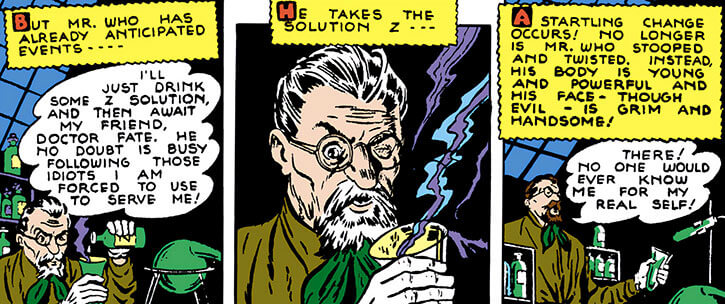