This Mister X (there are many Mister Xs in the comics) appears in one 1950 issue. His appearance is only notable since this story is a foundational tale of Catwoman (Selina Kyle).

This small profile is thus meant as a sample mob-boss-with-a-gimmick from this era. Mostly for those who need such a figure for a story/RPG scenario.

Mister X’s gimmick was used by several other fictional mob figures. The classic one is the Big Man (Frederick Foswell), who appeared in 1960s Spider-Man stories.

Mousey is an experienced street criminal. He understands how the underworld works, is streetwise, and knows how to plan and carry out dastardly criminal ploys.

However, he is physically unimpressive, and has next to no charisma. This attracts endless bullies, especially given the people he frequents.

As part of his plot, Mousey apparently trained himself to speak in a different, deeper voice than his normal tone.

Mousey has a pair of shoes with a secret compartment. This is presumably because they have height-boosting insoles, heels or some such. He usually keeps a file hidden therein, to work his way through prison bars.

He also illegally packs heat – presumably a compact revolver in a so-so calibre.

In 1950, a small man nicknamed “Mousey” was a shady type in Gotham. He incessantly tried to join a real mob, pestering made men in underworld hangouts and trying to make connected friends. Since everybody was making fun of his slight stature, this didn’t work.

Mousey procured a veil-like mask, stilts, padding, a sort of corset, etc.. Using these as a disguise and speaking in a deeper voice, he could become “Mister X”. Mister X was exceptionally tall and broad-shouldered. This apparent wall of muscle was about 6’3″ and 260lbs, which was particularly impressive in 1950.

Mister X was far more intimidating than Mousey, and soon came to control his own gang. To throw off any suspicion, he continued to be seen as Mousey. He even kept asking to join the Mister X mob, which Mister X’s men found ridiculous.

Mister X’s mob launched a successful crime wave. They were daring, the crew was big tough guys who didn’t afraid of nothing, and they used flashy gear such as huge cars and dynamite.

But Mousey knew that he could only go so far. He thus had his men spectacularly bust Catwoman out of prison. He offered her to become his partner-in-crime, and plan their operations. His angle was that Catwoman was known for working non-lethally, and that using her methods meant less heat for him and his crew.

However, Catwoman accidentally recovered her memory (long story), and became a covert agent of the police. Mousey accidentally learned of this, but was then jailed for carrying an unregistered firearm.

And it would’ve worked too…

While Mousey was busy filing loose his cell’s bars, Catwoman and his gang ran two heists. The mobsters were used to working without contact with Mister X, for security reasons. But after capturing Batman and Robin, Catwoman demanded to see Mister X to negotiate a bonus.

Mousey escaped just in time for the meeting to take place. He ordered his men to kill Catwoman, Robin and Batman. However, the Dynamic Duo escaped from their death trap, then rescued Catwoman from hers.

Together they stopped Mister X, having deduced his true identity.

Mousey was bitter, and tired of being treated like faeces.

He seemed to be smart and capable, though not as intelligent and imaginative as Catwoman. Unlike many criminals he was cautious, and preferred long-term thinking.

Bonuses and Limitations:
Artist (Actor) only for his Mister X disguise and voice.

Benefit: Unrecognizable (+5 circumstance bonus to Deception checks to disguise himself as Mister X and to be unrecognizable as Mousey), Minion 3 (a thug, Mister X can be assigned as many thugs as needed for the scenario). 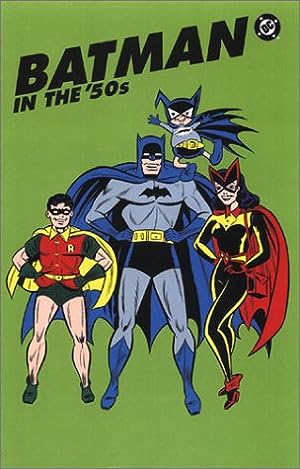 Batman In The Fifties collection