Despite being a teenager, Misty is an experienced breaking and entering specialist. She’s stealthy, and good at detecting and avoiding security systems. For instance she uses sprays to make IR beams visible and knows where such measure are habitually placed.

She’s also tricky, especially when cornered. Or if she’s underestimated as being just a brat.

Her specialty is lockpicking. And like with many Gunsmith Cats characters, her skill level is nigh superhuman. Misty can pick open almost anything within an unbelievably short time, even if she’s using improvised tools.

She once opened police-issue manacles around her wrists within about 10 seconds, using a staple ripped away from a cardboard box.

Brown is a quick and experienced knifefighter. She’s usually using a switchblade. She doesn’t run around sticking people with her blade, but will usually delivers series of quick attacks to disarm people by slashing at their hands.

Or she might do precise series of slashes to cut her opponent’s clothing open and hamper them. For instance she once slashed Larry Vincent’s leather miniskirt comprehensively enough for it to drop around her ankles. However, Vincent managed to hop out of it and give chase.

Misty’s also a good knife thrower. She carries a brace of three light steel throwing knives. This is presumably because she’s too young to carry a firearm without legal complications. 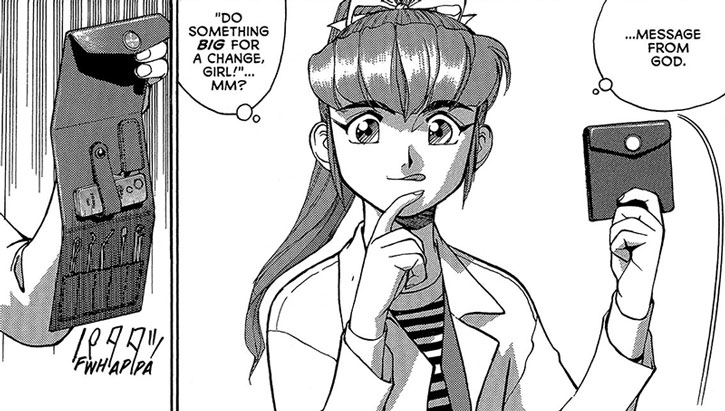 Misty’s a decent driver – she’s just old enough to have a learner’s permit in Illinois when the story starts.

Our game stats assume basic firearms competence since she reportedly did a good job manning the counter at the Gunsmith Cats shop.

Though she’ll easily get nervous and emotional, Misty has good willpower. She can resist interrogation for a while if she’s motivated enough.

Misty Brown already had a rap sheet 10 pages long at age 15. She was known as a gifted cat burglar – though she only did empty houses, and only took cash. The bounty on her head became large enough to interest skip tracer Larry Vincent, who captured her.

However, Misty was desperate. She knew that her lawyer had his nephew murder a local kingpin to steal a large shipment of cocaine. But the cops would certainly not believe her. And once she had been arrested it would be trivial for her lawyer to have her killed to prevent her from talking.

Vincent eventually agreed to check Brown’s story, and the two murderers were arrested. Larry and Misty became friends, though Misty wisely didn’t tell Larry that she had a crush on her.

Misty was sent to prison for some previous burglaries, but was released after a few months. Within 48 hours of getting out, she was again in serious trouble.

Misty had met a girl in prison. Janice was the daughter of an investigative reporter who had shot incriminating tapes about Mafia activities. Realising that these tapes would get him killed, the reporter had had his daughter hide the tapes. But it was too late and he was killed.

When she met the investigating cops, Janice recognised one from the corruption tapes. She pulled a knife in anger. After being arrested, she was harassed by other juvenile offenders, but Misty stepped in and defended her.

As soon as she got out, Misty sold the tapes to CNN . Unfortunately, the Mafia knew about it. A capo from the old country, the deadly “Iron” Goldie, made it her business. The journalist was killed and Misty only narrowly escaped with the help of Larry Vincent, whom she was supposed to meet for lunch to celebrate her release.

Not wanting to go toe-to-toe with the Mafia, Larry reluctantly agreed to take Misty to FBI contacts of hers. However, Mafia hitmen tried to kill them with an USAS-12 and failed. Furious over the extensive damage to her beloved Cobra GT500, Larry agreed to help Misty. However, Goldie recaptured Misty right under her nose.

The mafiosa used her designer drugs to have Misty talk, and threatened to inject her enough time to make her addicted.

When swapping Misty against the tapes, Larry and Minnie-May masterfully turned the tables on the Mafia despite Goldie’s precautions. They got the dazed Misty out – though they had to abandon the tapes. Misty fully recovered from the drugs’ effects.

Vincent hired Brown as her second bounty hunting assistant and gun shop helper, presumably at minimum wage. Minnie-May was at that point on a break to date her lover, and Larry may have intended to provide Misty with a job to keep her away from crime.

However, Misty was captured again after sneaking into Goldie’s HQ to locate and rescue a kidnapped Larry. Yet Misty had time to warn Minnie-May of Goldie’s plan, which saved Larry’s life.

An interest in Bean

Iron Goldie was going to take Misty back to Italy with her. But Larry intervened at the last second and made an incredible sniper shot through Goldie’s hand, allowing Misty to make a run for it. Brown resumed her job at the Gunsmith Cats gun shop since Larry could barely run her business anymore. She gradually became a skilled sales clerk.

A recovered Misty was later convinced to break into Bean Bandit’s well-secured apartment, as Larry was looking to prevent a drugs deal. Misty sailed through the security systems, then defeated all three locks on the door by the time Bandit could walk up the stairs from the garage.

This allowed Vincent to sneak into Bandit’s car and eventually win a high-stake bet. as a result, Bandit renounced to run drugs.

A month after Misty played a small role in the apparent death of Iron Goldie, she randomly ran into Bean Bandit’s special car. Misty impulsively stole it. However, the car was transporting key supplies to launch a massive banknote forgery operation. As a consequence, a well-armed criminal crew was after it.

After she came under fire, Misty drove away to escape. Though her pursuers caught her, she switched a key needed to use the supplies with Bandit’s car key.

Brown was uncomfortably kept captive by the gang, who planned to trade her for the key. When Larry reached them by phone to verify that Misty was still alive, they pretended to have a verbal fight. But Misty actually used code words to describe the getaway car used by her kidnappers.

A deal was hashed out to recover Brown. However, the lecherous forgery expert that the criminals had captured for their plot struck a further deal with his captors. He was offered Misty as a bonus.

The attempt by Larry, Bean and allies to storm the criminals’ hideout partially failed. The opposition tried to use Misty as a hostage, but she had picked open her handcuffs using a staple from a cardboard box. She then unexpectedly used Vincent’s jacket lying on the floor to eject the gun hidden up its sleeve into Larry’s hand.

Despite her efforts Misty was nearly shot dead. But Bean Bandit interposed his forearm and painfully intercepted the bullets. The fake money was destroyed, Bean closed his contract, Larry got her prey and Misty resumed working at Vincent’s gun shop.

Misty is a pretty, very slim teenage girl with light brown hair. That she takes so little room is an asset in her job. It once saved her life as she could fit through cramped quarters whereas her pursuer couldn’t.

Whereas Larry and Minnie have an impossible amount of experience in their high-octane jobs, Misty acts more like you would expect a teenager whose tumultuous life gave her significant street experience, but no special emotional maturity.

She has a good head for crime but tends to be impulsive, animated and emotional. She is still a child in many respects. Brown can come across as a bubble-headed bimbo at times, but under pressure she’ll often come up with clever tricks to save her hide. These often have to do with item manipulation and her manual dexterity.

Misty doesn’t have the stones for extremely dangerous situations involving gunfire, car chases, explosions, demented junkies single-handedly flipping cars to their side, etc.. In such she will be visibly scared and want to skate.

However, she is learning at Larry’s and Minnie-May’s side, though she’ll likely prefer to remain on the light-footed and fairy-fingered side of things.

Misty has a big crush on Larry, and even tried to kiss her once to thank her. But this completely squicked out Ms. Vincent. Though it was hopeless, her crush remained. Misty later developed another big crush on Bean Bandit after he saved her from being shot.

Despite being a confirmed criminal, Misty believes in justice and in defending the weak against abuse.

“Misty, Misty, here to save the daaayyyy !” (brings her car to a screeching halt at the entrance of a narrow alley, blocking the suspect’s egress)

“Yep… thought so. There’s an IR sensor in that crack in the wall… don’t trip it, okay ?”

“You’ll never beat them just ’cause you got me for a hostage ! You’re up against Larry Vincent and Bean Bandit, you know !”

“Um, Larry… do you know if Bean already has a girlfriend ?”

Bonuses and Limitations:
Superspeed is a Skilled Power, and only works for Tasks using Thief (Locks & Safes) or (Thief (Escape Artist).

Bonuses and Limitations:
Thief (Escape Artist) only on restraints with a lock, such as handcuffs. 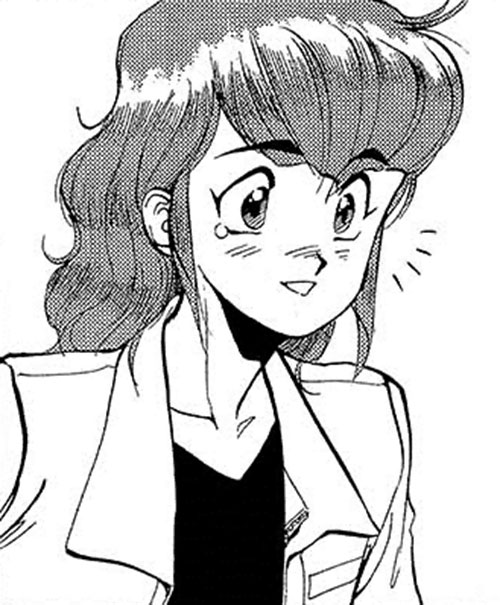 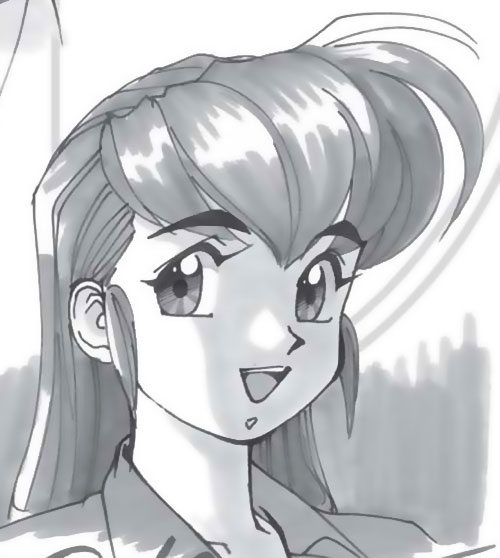 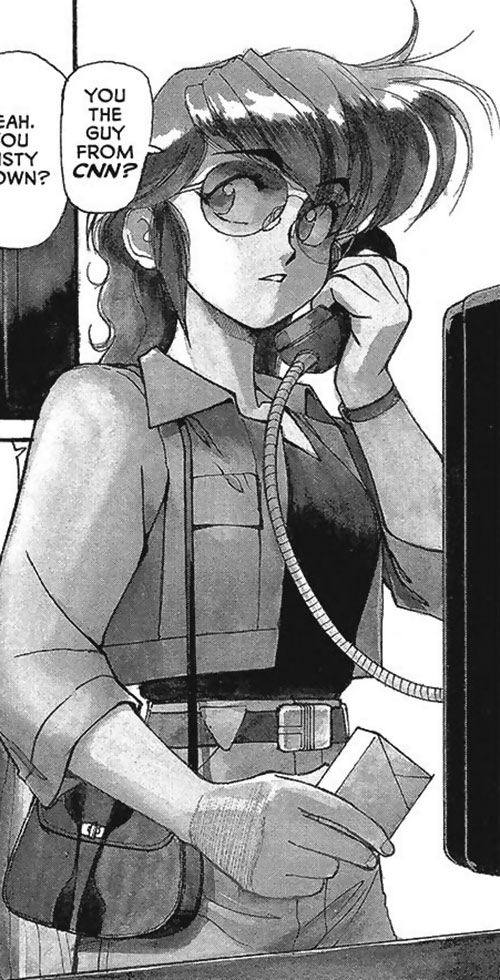 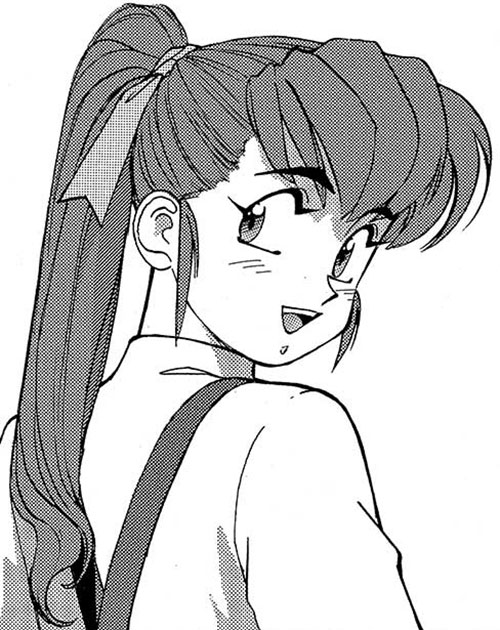