This setting is a super-hero one that is both original and represents all key Marvel and DC Universe beats. But it is explored from a human interest angle, often from the point of view of bystanders or what would normally be minor characters.

Chefwick had no innate powers, but relied on his Mock Turtle armor to become a costumed criminal.

Chefwick was a competent scientist and inventor who specialized in mathematics, physics, and engineering. He is capable of creating extraordinary technology in a world of metahumans. He was also skilled at piloting his Mock Turtle armor, had some tactical skills, and was a fair combatant.

The Mock Turtle is very good at making an escape. When overwhelmed, he will use all of his manoeuvring skill along some Hero Points  to successfully escape. For example he will reach terrain where his environment suit has an advantage.

After years of pulling robberies, he probably also has a stash of money hidden somewhere.

The armor is created to go anywhere, from the stratosphere to the ocean floor, and conduct all kinds of experiments. It can withstand great pressure, and presumably included temperature regulation systems and a self-contained oxygen supply (Sealed Systems). The armor protects the user from collisions, energy and physical attacks, and even gunfire (/BODY/ and Skin Armor).

Chefwick could fly by activating twin jets on the back of the Mock Turtle’s “shell” (Flight). The Mock Turtle armor was highly maneuverable in flight, could travel at high-speeds, and allowed Chefwick to cross the Atlantic ocean and travel around the globe.

The Mock Turtle armor was especially well-suited to underwater exploration (Water Freedom). Chefwick could easily reach the bottom of the Thames and survive underwater for extended periods of time. The suit’s rockets enabled Chefwick to travel at high speeds underwater (Flight under water). It was later customized with several new additional and offensive abilities.

The Mock Turtle armor clearly has advanced hydraulics. These and other systems provide the user with greater-than-normal strength (/STR/). Chefwick has been observed splitting a boat in half by slamming into the craft. The bulky gauntlets can fire bursts of energy capable of cracking open an armored truck (Energy Blast).

The armor’s onboard devices provided Chefwick with enhanced vision (Ultra Vision), allowing him to evade opponents by entering deep seas or other obscure terrain. The armor also included an onboard computer (INT) that tracked and recorded Chefwick’s exploits for later review (Recall). 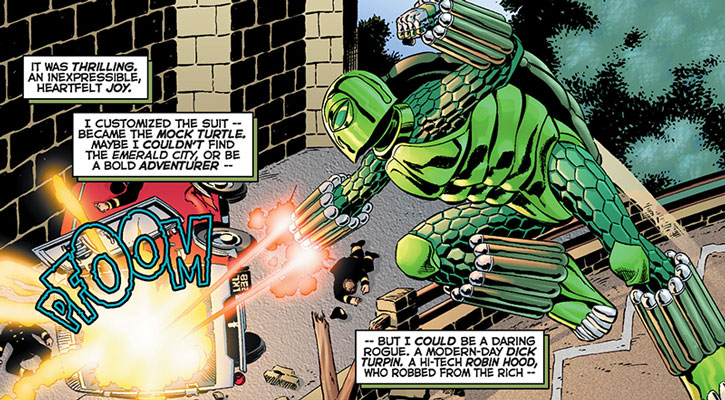 A staple of most armored suits with ranged weaponry, the armor also has onboard targeting systems which provided Chefwick with increased accuracy when using his blasters (AV). These are not cutting edge technology, however, and somewhat inferior to his later modified targeting systems of the Chessmen armor.

Since the original suit had the ability to “conduct all kinds of experiments,” it suggests that the armor had a wide range of scanners, sensors, and other devices (various Vision powers and Radar). The armor may also have amplified hearing (Directional and/or Extended Hearing) and an in-built flame thrower (Flame Project). These tentative powers may be treated as Marginal Powers.

All in all, it’s a remarkable piece of engineering.

Martin Chefwick grew up in Brixton. As a boy he was enthralled by the fantasy novels that existed in the 1960s – the likes of Narnia , Alice in Wonderland or The Wizard of Oz . He was convinced that he could reach these places.

As he grew up, he became fixated on science and engineering instead, becoming a remarkable technologist.

His childhood friend with a neighborhood girl called Lucia. However, she had always been raised among criminals and would-be criminals. Though Marty was convinced that Lucia was his best friend, she kept manipulating him. This ranged from pocket money when they were about six though obliquely obtaining advice useful for crime later on.

As an engineer working for the World Petrol company, Chefwick designed and built an exploration suit. His invention was capable of reaching both the stratosphere and the ocean floor. He hoped that becoming an explorer would make him look more manly and impress Lucia.

However, the company sensibly wanted a professional diver use the Chefwick suit for prospection. The engineer flew off his handle and stole the suit, thus becoming a super-villain. He restyled his bulky design to theme himself after the Mock Turtle, a character in Alice in Wonderland.

I don’t even know what a Mock Turtle is, said Alice

The Mock Turtle worked with many super-villains in the UK. He fought local super-heroes, but never could be captured for long. Still utterly clueless, he gave all of his extra money to Lucia, thinking that she was charitably supporting their old neighborhood. In actuality, she was building her own mob. 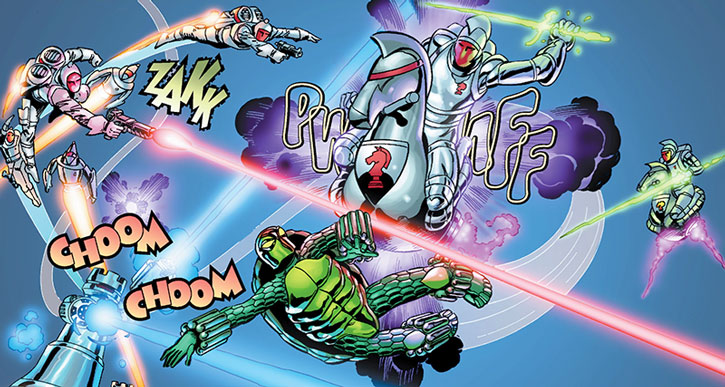 With Chefwick’s money, she even procured wrecked suits of Chessmen armour from Astro City. Thrilled to analyse this advanced technology, Martin thought it was just a gift to increase his knowledge. However, the refurbished Chessmen unit would actually become the main enforcers of Lucia’s Red Queen mob.

Howbeit, the kingpin of crime Clever Dick manipulated the Mock Turtle in turn. He convinced him to dismantle much of the Red Queen’s mob. This saved Clever Dick’s mob from being taken over by the Red Queen, and left Lucia with very little.

Furious, she sicced her Chessmen after him. Thus, after about 30 years, Chefwick finally realised what had been going on.

Once there were four children whose names were…

The Mock Turtle barely escaped with his life. But the enraged Red Queen had her Chessmen chase him all over the world, thanks to an emitter hidden in his armour. In the US, the Turtle finally found the tracer. But the Chessmen were snapping at his heel as he reached Astro City.

Chefwick had heard about the Kiefer Square neighborhood, which had ties to numerous C-list and D-list super-villains. He crashed there.

Coincidentally, the Square was up in arms. A serial killer of minor villains had been preying on them – and they wrongly assumed that the Chessmen were behind the murders. The heavily-armed locals ambushed the Chessmen and hammered them but good, destroying the Red Queen’s last enforcer cadre.

Amazed that complete strangers had just risen to his defense, the overwhelmed Chefwick thought that he had found a home at last. He saw it as a real-world Emerald City of Oz. Unfortunately, he was soon murdered by the real serial killer — presumably El Conquistador (Esteban Suarez Hidalgo).

The green Mock Turtle armor fully covers his body. The chest piece is formed like a turtle’s shell. His arms and legs are covered by flexible armored plates. He also wore gauntlets, boots, kneepads, and a helmet with protective lenses.

Chefwick himself was a small, unassuming, blond male.

Chefwick spent his entire life escaping into other worlds. He would read fantasy novels or study physics and math. Already as a child he was inquisitive, always exploring, always searching. He expected there to be, just around the corner, far from the fields we know, an Emerald City.

Narnia and Alice in Wonderland had their appeal too. He went to suburbs and got beaten up, and wanted to find the right looking-glass to go through, and apparently couldn’t find the peace he wanted anywhere in this world.

When he met Lucia, his neighbor, he just knew he had found a piece of his dream. He was infatuated at once. His head always in the clouds, it was easy for the other kids, including Lucia, to get his money. And so he grew up a misguided day-dreamer.

He realized that the worlds he dreamed about weren’t real, but he found new worlds to explore. Those were the worlds of mathematics and physics, that had their own kind of magic. He immersed himself completely in this new dream, while keeping in touch with Lucia. She took eager interest in his work, realizing that it could be used for criminal gains.

He desired love and respect, and attempted to use his Mock Turtle identity to achieve both. A life of crime was thrilling, an inexpressible, heartfelt joy. In his own eyes, the Mock Turtle was a daring rogue, a modern-day Dick Turpin , a hi-tech Robin hood who robbed from the rich. Then, because he was still very naïve and easily-manipulated, he would give it to Lucia.

Once he was betrayed by the Red Queen, his beloved Lucia, Chefwick was crushed.

“I realized just what I’d done. What I’d found. All my life I’d read, and dreamed, and imagined. And finally I’d given up. Settled for less. And I’d tried to build something, tried to make a dream come true — but it wasn’t my dream, it was Lucia’s — and now here it was. Right in front of me. My dream.”

“You’re pure, Lucia — innocent. I couldn’t drag you into the shadows — into the criminal demimonde I’ve entered. But whatever happens, you’ll still be my lady fair. And I assure you, my dearest one — you haven’t heard the last of the Mock Turtle !”

“But — but — this is the Chessmen armor ! It was worn by American mobsters — in Astro City, I think ! Last I’d heard, it was reported destroyed by Samaritan ! Wherever did you find it ?”

“I couldn’t think. I was so shocked, so stunned — had it all been a lie ? My whole life — all my dreams ? Was none of it real ? I didn’t have much time to think things through for weeks after that. Lucia was obviously not in the forgiving mood. Wherever I ran — Paris, Cairo, Caracas, Ixtapa — the Chessmen were on my trail and out for blood. I didn’t find the tracking device she’d slipped into my armor until just a few hours ago. I didn’t have anything to live for, after all. My dreams were all shattered, broken beyond repair.”

Clever Dick: “There’s a new little tart in the game, Turtle — a jumped-up little nowt from the slums, callin’ ’erself the Red Queen. She wants to play with the big boys — and I want you to send ’er packin’.”
Mock Turtle: “Ah — ordinarily, Dick, I steal things. I can take care of myself, but roughing someone up isn’t my usual —”
Clever Dick: “Yer usual —? And just when did a smart geezer like yerself ever stay in one rut, eh ? Yer the man for any job, and you know it. Right ?”
(Mock Turtle thinks that he had a point. It was nice to be respected and to be needed.)

The Mock Turtle is Astro City’s version of the Blue Beetle. The differences being that the Mock Turtle is a misguided villain and instead of flying a mechanical beetle/turtle he is wearing one himself. 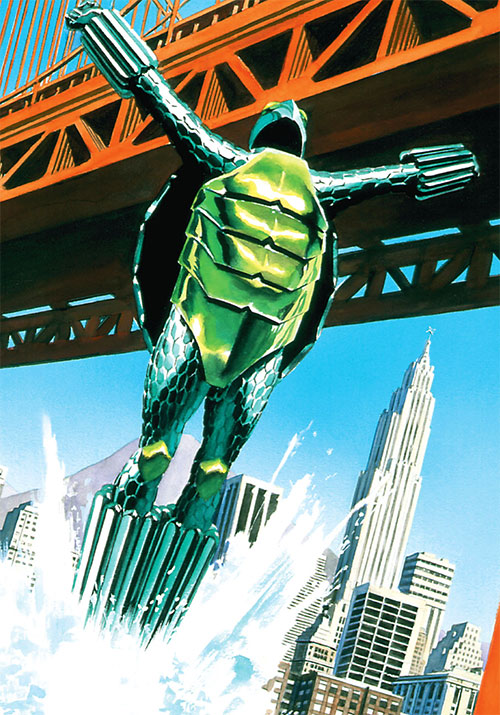 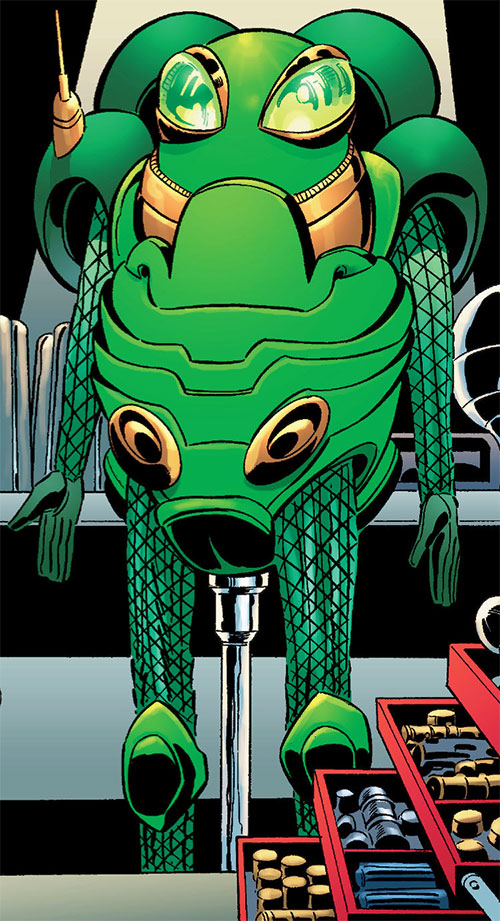 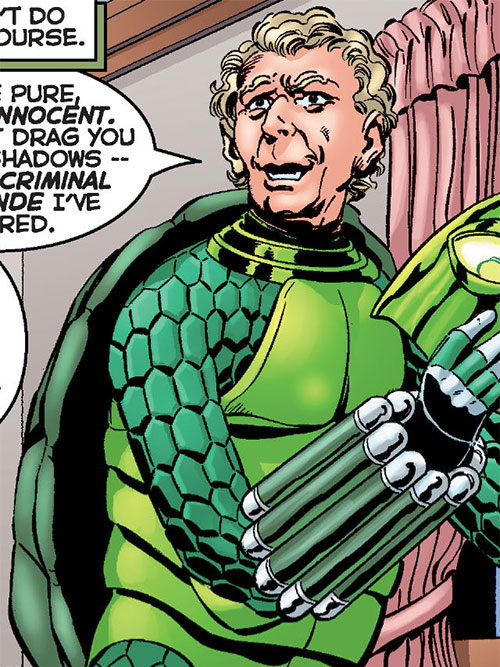 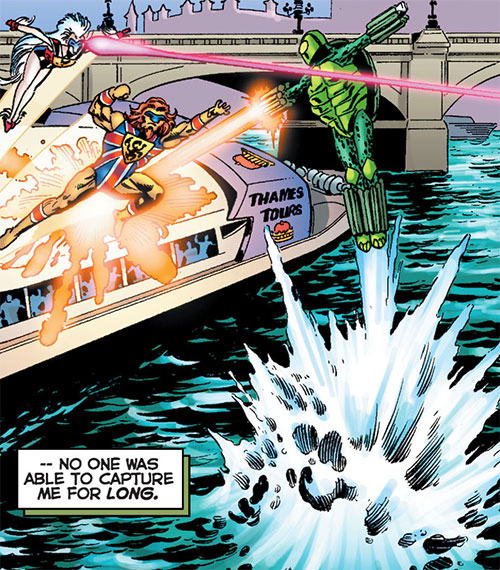