This profile is part of a series, to be read in order :

This here second entry covers a transition period where she goes from being an agent of S.H.I.E.L.D. to being the Huntress to debuting the Mockingbird identity.

Bobbi continues to train heavily, especially in acrobatics and the martial arts.

She’s now a cinematicThe level of power and (un)realism found in a spectacular action movie. athlete and hand-to-hand fighter, able to beat up groups of opponents. 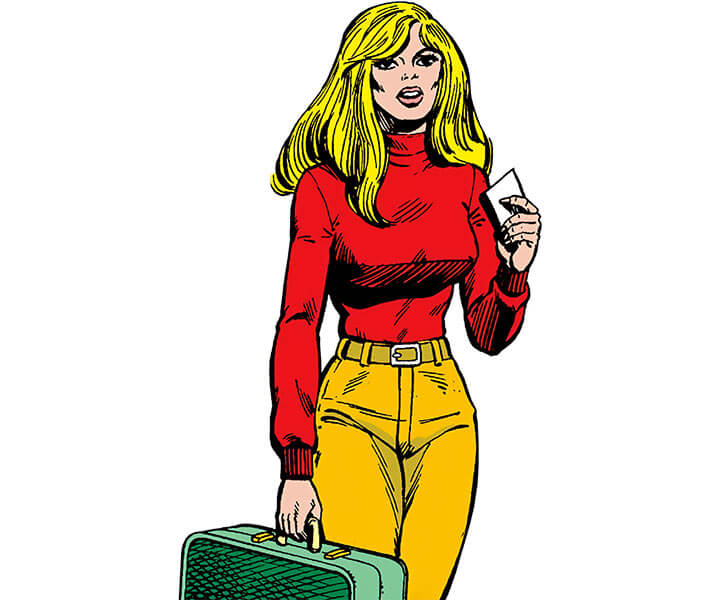 Too skilled a Mockingbird

Her main asset is speed. And though her mass and strength aren’t huge, she demonstrated a remarkable level of endurance and pain tolerance. She uses a full fighting style with kicks, punches, throws, etc..

Despite having access to all sorts of advanced S.H.I.E.L.D. weapons and gadgets, Dr. Morse usually fights unarmed. I guess she took levels in Monk.

Going from better to Morse

In 1979, Dr. Morse designs and builds her distinctive Mockingbird costume and battle staves.

The costume is fire-, plasma- and penetration-resistant.

The 2′ (60cm) steel fighting sticks are stored in spring-loaded sheaths under her forearms. They can also be locked together and telescope to up to 8′ (2.40m), to form a fighting staff or a vaulting pole.

This equipment is not seen for long at this stage. But it’ll be fully detailed in her next profile.

Bobbi trailed Meroz all the way to the Savage Land. She and Ka-Zar eventually defeated El Tigre and the Man-God (Maa-Gor).

However, Dr. Morse didn’t linger much. She still couldn’t stand the jungle lifestyle.

Lord of the Hidden Jungle !

In 1975, S.H.I.E.L.D. detected two major underground vibration waves. These would meet in the Savage Land, and the impact would result in worldwide devastation.

Agent 19 was put in charge. She hired Shanna “the She-Devil” O’Hara as her guide. She also had an unmarked boat outfitted with special sonars, high-powered searchlights and lots of other electronics. This allowed her and her crew to reach the hidden land.

There they recruited Ka-Zar. However, they lost two men to a giant snake attack. Then they got into a conflict with the Hill-Forest People.

The vibrations were coming from time capsules from “one billion years ago”. Back then Earth had but two continents  . The champion of each of the two rivals species had been put in suspended animation. They were to emerge in the far future to solve their conflict. But one champion was defeated by Ka-Zar.

When Bobbi snatched the other capsule, the champion within had died a long time ago to a malfunction. Curiously, he looked very much like Ka-Zar.

In 1976, Agent 19 had been detailed to bodyguard S.H.I.E.L.D. lawyer Orlando Zarate. Sheer luck left her the sole survivor of a bomb.

As Morse recovered, Congressman Kirk told her that he suspected there was a network of double agents within S.H.I.E.L.D.. The Zarate murder clearly was an inside job.

Agent 19 went rogue in order to root this corruption. She designed a masked identity for this – the Huntress.

Returning to Mexico, the Huntress contacted one Scott, a S.H.I.E.L.D. agent who had been one of her trainers. She sought his insight about local S.H.I.E.L.D. contractors.

She discovered that a wealthy and shady couple financed by S.H.I.E.L.D., Rico and Angela Santana, had gone rotten. They were using S.H.I.E.L.D. funds to prepare a major coup in the Middle East, and indeed were behind the Zarate murder.

The Huntress put an end to this, but Scott was killed in the fray and the Santanas killed each other.

(This plot seems similar to what little we know about the plan El Tigre was working on in Mexico. It certainly seems possible that the Santanas had resurrected his plot. This would also help explain why Bobbi started her work in Mexico.)

(The Huntress story was supposed to be a two-parter, but was pared down to one for financial reasons. It certainly feels… accelerated.) 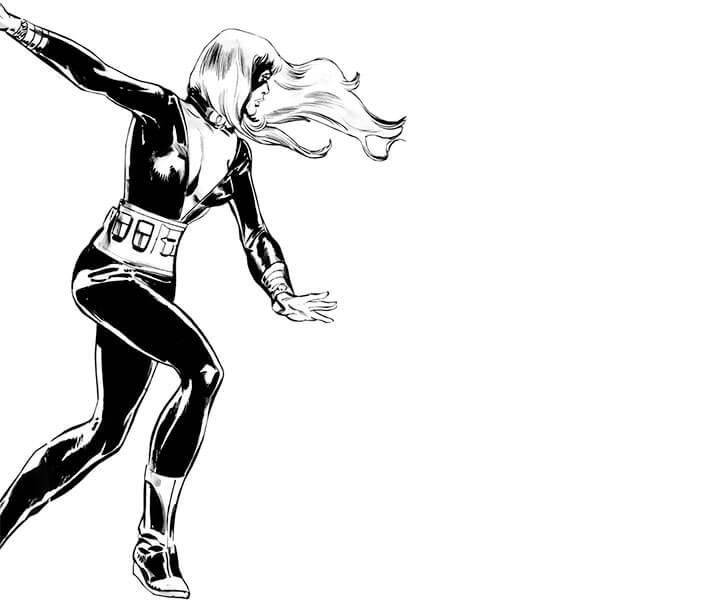 Feather in the mornin’…

Ms. Morse worked for years to take down corrupt S.H.I.E.L.D. agents. She extensively documented those she couldn’t get.

The Huntress thus mapped out what seemed to be a major Hydra infiltration of S.H.I.E.L.D..

In 1979, she adopted the identity and gear of Mockingbird.

… feather all through the night

In 1980, she attempted to contact Nick Fury in a New York City S.H.I.E.L.D. facilities.

But Director Delandan, heading the New York branch, was apparently a Hydra plant. As part of his efforts to stop Mockingbird, he tricked Spider-Man (Peter Parker) into assisting him.

Bobbi’s attempt to reach Colonel Fury would thus likely have failed. But she half-convinced Spider-Man that she wasn’t the bad guy, and Delandan broke cover.

It then turned out that a Nick Fury LMDLife-Model Decoy. A lifelike robot double. working with Delandan was the actual Fury. The Colonel also suspected Delandan, and had thus seized the occasion to watch him closely.

Mockingbird managed to hand over her files to Fury. However, S.H.I.E.L.D. agents who weren’t aware that Delandan was a traitor gunned her down.

Her armoured costume, and Fury rushing her to a hospital, only narrowly allowed her to survive. 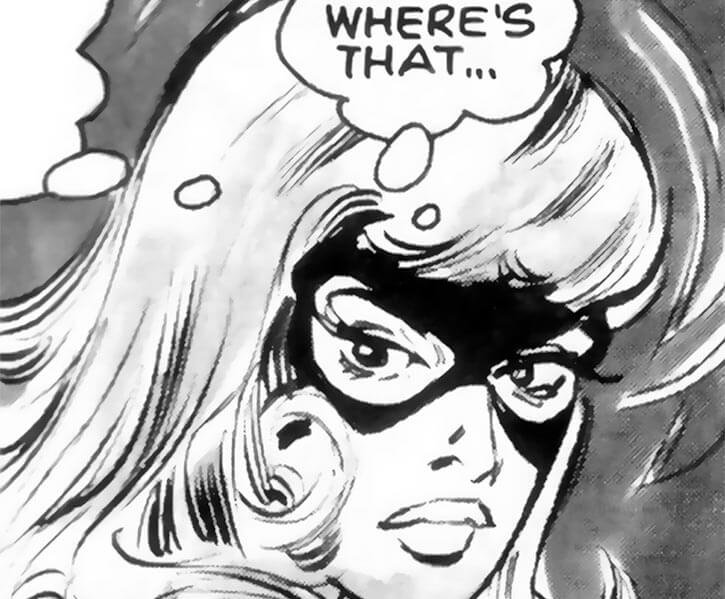 Dr. Morse spent months in a coma, but eventually made a full recovery. In the meanwhile, Fury purged those traitors she had exposed.

Morse and Fury eventually decided to fake her death. The risks of retaliation, including against her family, were too severe.

Bobbi also left S.H.I.E.L.D. – presumably, too many people there knew her. She became the crimefighter Mockingbird full time, apparently by earning bounties.

In 1982 she was glimpsed among the crowd of super-heroes assembled for the Contest of Champions between the Grandmaster (En Dwi Gast) and Death. But Mockingbird wasn’t an active participant.

Hawkeye and Mockingbird #2 (2010) depicts Fury and Mockingbird erasing everything about Barbara Morse. Her S.H.I.E.L.D. file gets an “alpha eyes” classification, all other archives are wiped clean, she sets up off-the-record caches and security measures, etc..

This is a retconMaking changes to a character or story after the fact of the 1983 Hawkeye series, where she freely reveals her identity to Hawkeye (Clint Barton). Which is noticeable, since Hawkeye is where Mockingbird fully debuts.

Dr. Morse *did* take irrational decisions about the exceptionally attractive Mr. Barton. Such as marrying him. But that she would break her extensive security by spontaneously unmasking is pushing it.

A No-Prize Hypothesis is that between 1980 and 1983 she was particularly successful in taking down what remained of the infiltrators behind Delandan and his ilk. Perhaps it was one of those rogue, small Hydra factions rather than Hydra proper.

Thus, between Fury’s purges while she was comatose, and these exploits, she may have felt it was okay to tell an Avenger. 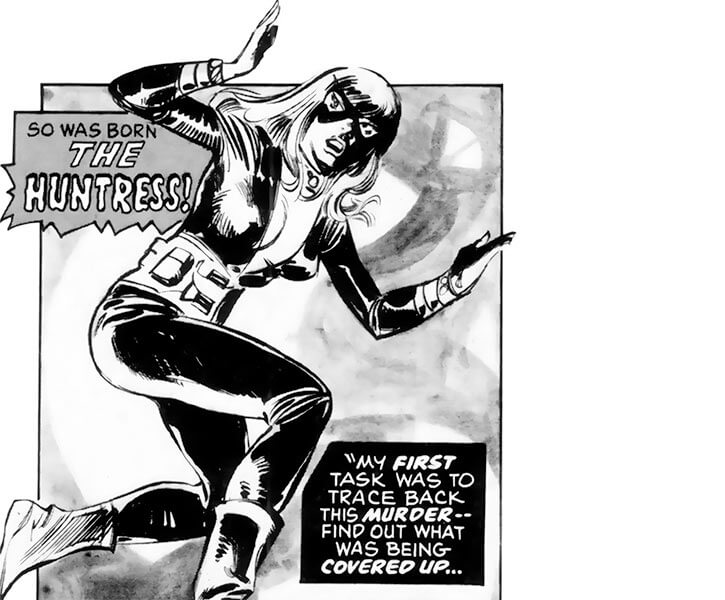 Bobbi and the Distinguished Competition

Writeups.org doesn’t generally discusses the out-of-universe aspects of characters. Our focus is on the in-universe material.

But we also have an “Alternate Reality Version” tag for characters, which could sort of fit Mockingbird. Here’s why it’s not used here :

So it’s pretty indirect. In good part because Bobbi’s early career was so chaotic out-of-universe. 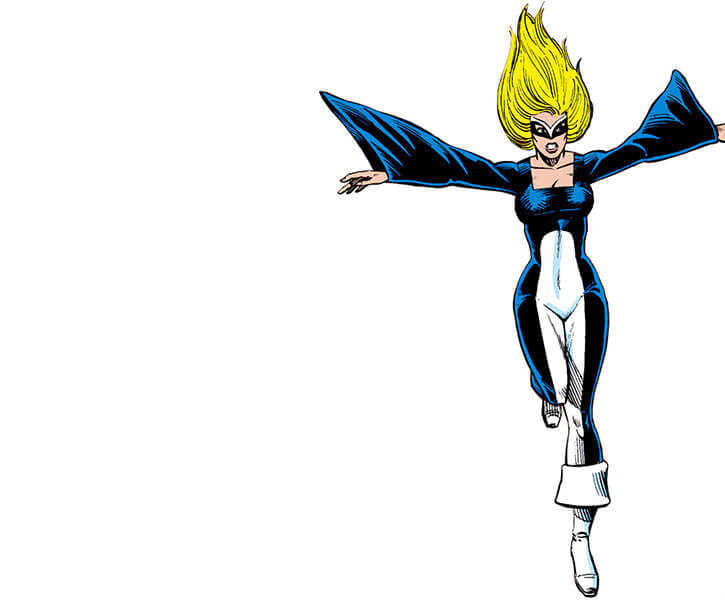 The bright red 1970s rompers is what she usually wears when appearing as a S.H.I.E.L.D. agent.

And the black/very dark blue jumpsuit with a worrying lack of support is the Huntress costume.

Though Dr. Morse changes a lot during this era, there isn’t that much material. Which also means there isn’t much characterisation space.

“Well then, it’s obviously time to put my S.H.I.E.L.D. training to work ! Boss-man Fury probably didn’t have *this* battle in mind when he gave me that training — but he did say ‘be ready for anything’ !” (WOMP !) 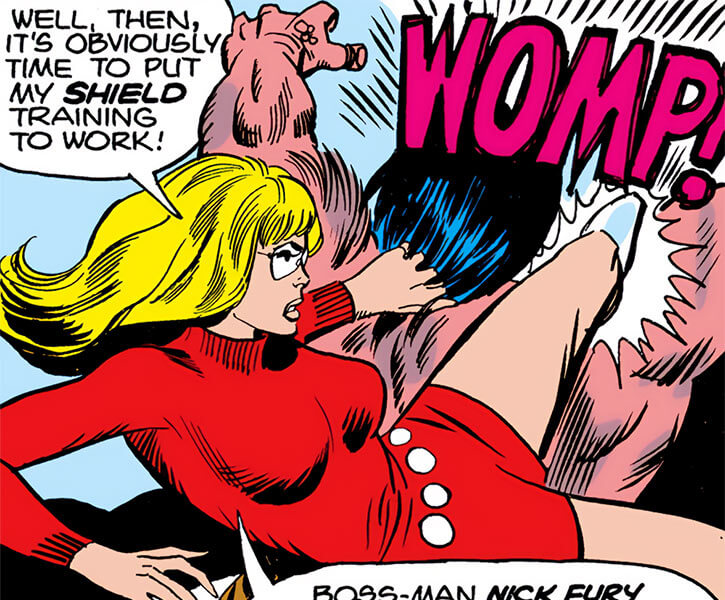 Mistrust (hunted by S.H.I.E.L.D. and their allies).

None demonstrated except for a car. One piece of art depicts her dual-wieldingUsing two weapons at once, one in each hand daggers, but these aren’t seen in any story. 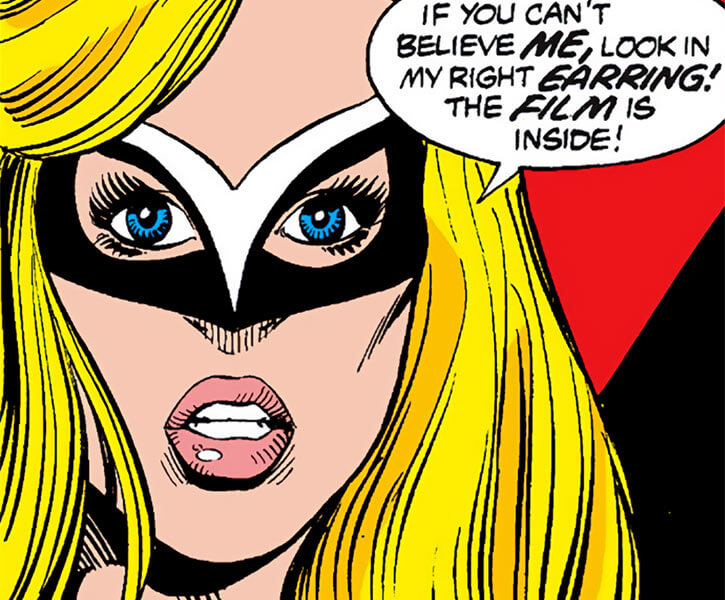 At this point, she still uses her Huntress stats – but with 30 Hero Points and Weaponry (Battle-staves): 06. The major change is the gear.

If you need stats for it right here right now, use the numbers in Ye Olde Mockingbird Notes.

Bobbi will later be established as nearsighted, but at this stage the glasses (if any) seem decorative. 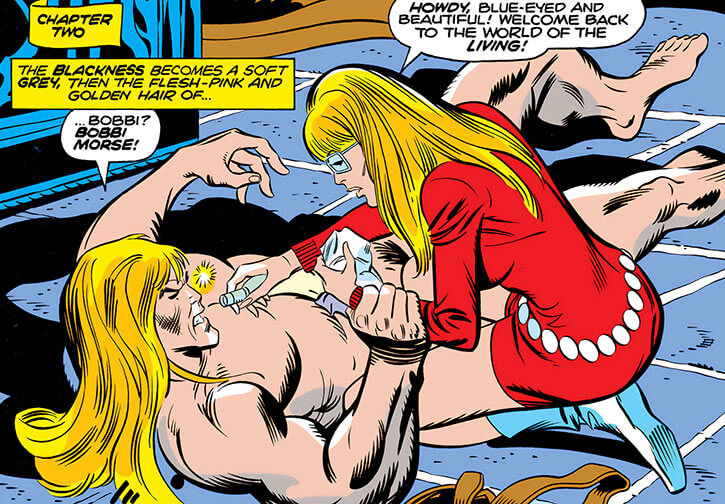 Benefit 2 (Bobbi is an agent of S.H.I.E.L.D. with a bit of seniority and a good relationship with Nick Fury), Benefit 1 (Well-off), Equipment 1.

One piece of art depicts her dual-wielding daggers, but these aren’t seen in any story.

Mostly she runs around with more Hero Points, and has Close Combat (Battle-staves) 1 (+9).

The main changes are in the gear, which’ll be detailed in the next writeup.