Once he’s possessed by The Other, Modred’s magic becomes less elementally-themed. It gets closer to generic comic book magic, and he eventually casts the same spells as Doctor Strange.

Generally speaking, Modred’s power isn’t massive. But his blasts are pretty strong (unless he’s forced to fire at two targets simultaneously), and magic can do almost anything. The flexibility evidenced by the examples above make him rather dangerous.

Or if you prefer, he can throw a lot of curveballs during a given match.

Late during this era, Modred wears the Captain Britain tricolour costume. It enhances the wearer’s strength and durability (to “Class 10” levels), grants the power of flight and emits a tight protective force field. Captain America’s blows, even with the shield, couldn’t harm Modred while he had the Captain Britain costume on.

The Britain costume also seemed to make Modred faster and better fighter, likely as a side effect of the strength enhancement.

Modred could still use all his magicks whilst clad in yon patriotic costume.

By 1979, Modred was but a thrall of Chthon and held the Book of Darkhold. It seems likely that he was already dominated by 1978.

If so, it would be logical that he spent most of 1978 and the first half of 1979 reassembling the Book of Darkhold. Here is what we know about the Book at this point : 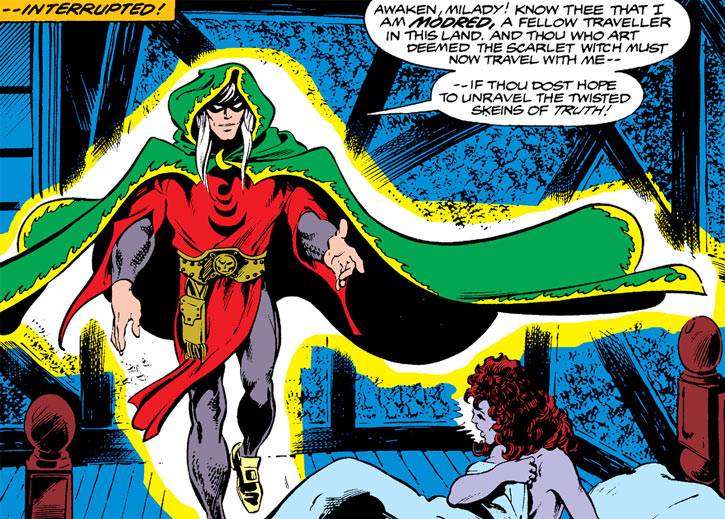 Modred was used by Chthon to finish reeling in the Scarlet Witch (Wanda Maximoff). The Witch possessed great magical powers and had been born on Mount Wundagore. As such, she was an ideal vessel for the Elder God to come back to Earth.

Modred lured Wanda into exploring Wundagore alone, and bushwhacked her. But Quicksilver (Pietro Maximoff) called in his former colleagues to help rescue his sister.

The Avengers and Pietro performed remarkably well. Though it cost him his life, the aged Romani occultist  Django Maximoff caught Wanda’s soul in a mystical puppet. Pietro and the Avengers then backed Wanda’s willpower so she could take back her body.

Chthon couldn’t muster enough willpower through what little access to Earth he had. His soul (or, more likely, the fragment of it called The Other) was shunted into the puppet. The Witch then buried the toy under thousands of tonnes of rock. 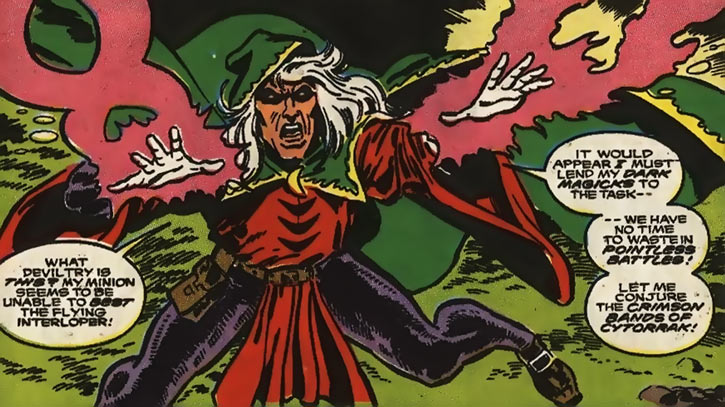 The possession by The Other having been broken, Modred was left shocked and mentally crippled. Since he was essentially an infant now, the New Man Bova volunteered to take care of him in her Wundagore cabin. She taught him modern English.

She also gave him many local toys, such as Napoleonic era wooden soldiers and teddy bears.

Under the ash the fire still burns

In 1981, Modred had the mind of about a 3-year old. When the Puppet Master (Phillip Masters) and the Thing (Benjamin Jacob Grimm) spent a night in Bova’s cabin, he was scared of them.

Unconsciously using magic in his sleep, he shrunk them and had his toys attack them. Alicia Masters and Bova came in in time. They told him that it was wrong and had him reverse his spell.

Before he left, Masters showed Modred how to animate his toys while awake. Having grown up friendless, the Puppet Masters thought he’d help Modred by showing him how to make friends to play with.

In 1983, Magneto terrorized poor Bova and little Modred to learn more about Pietro and Wanda Maximoff’s past. As the mutant master of magnetism left, Bova beseeched Modred to cast a spell to warn the siblings. The spell did work, but Modred was too scared and mentally too young. Thus, the warning was too vague to help.

Furthermore, Bova was left reeling from Magneto’s torture. She couldn’t keep a constant watch over her charge anymore. Feeling a vague compulsion, Modred wandered off in the mountains while Bova was out of it.

Modred walked all the way back to England. One suspects that he made extensive if mostly unconscious use of his magic to sustain himself, travel faster, cross frontiers and the Channel, shield himself from the elements, avoid attention and arrest, etc. 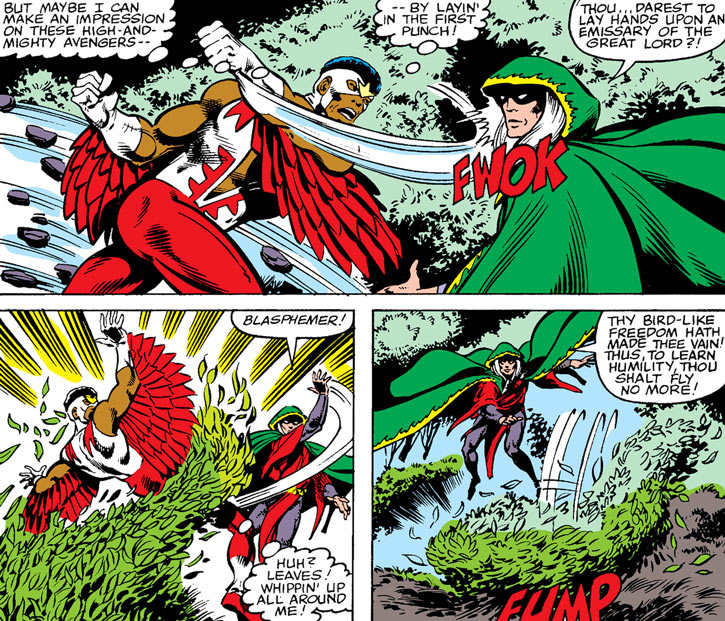 (Because even with 8 hours of walking every single day and absolutely no delay, such a trek would take at least 2 months and an arsenal of excellent socks. If you must know.)

Through unrevealed means, Modred established that Captain Britain (Brian Braddock) was an agent of Merlin, against whom Modred craved revenge.

Modred did defeat Captain Britain. He took his magical costume from him to become its new wearer. However, Braddock managed to briefly cast the costume around his ally Captain America (Steve Rogers). The alerted Rogers came to the rescue.

Modred, clad in the Captain Britain costume, captured Captain America as well. He then went on a rampage against London to provoke Merlin into confronting him. America and Britain managed to escape, and Braddock convinced Modred to transfer the costume back to him so he could summon Merlin.

Merlin didn’t manifest and Modred resumed his rampage. The two Captains took him down, and Merlin then appeared in the sky. The magician took Modred the Mystic with him – to the Otherworld dimension .

Now, this scene is weird. Because by that point Merlin had already been dead for months – slain by the Fury.

The image of Merlin that appears in the sky does looks ghostly. It certainly could be a spectre or an illusion or anything that’s not actually Merlin.

I don’t think there’s a clean explanation. Secondary sources  mention that Merlin’s astral form was still active after the Fury slew him, but it’s hard to accept that astral existence would seriously limit such a mighty mage.

Modred then managed to psychically manifest on Earth. He entered Excalibur’s lighthouse headquarters. Perhaps that was made possible by Excalibur’s recent cross-time capers weakening the local inter-dimensional barriers.

Modred possessed Phoenix (Rachel Summers). He had her use her immense energies to bore through inter-dimensional barriers until Modred could physically return to the Earth dimension. Modred apparently intended to launch a new plot against Merlin. It would seemingly require resources located in Europe (likely meaning Mount Wundagore) and using Phoenix as his minion.

However, they were intercepted by Quasar (Wendell Vaughn). With Excalibur’s support, Quasar more or less held his own against Phoenix and Modred. When Modred was trapped in a quantum bubble, Nightcrawler teleported in and forced the surprised Modred through a transdimensional  portal opened by Widget.

With Modred banished to a random distant dimension, Phoenix recovered her free will.

The Other left Modred practically mind-wiped. He was perhaps the mental equivalent of a one-year old when The Other was chased away, and seemed to mentally grow up after that at the usual pace, give or take.

Thus, when living with Bova, he was just a lonely little boy who loved his toy soldiers and was wary of strangers.

Late during this era

After he “recovers”, Modred speaks English in an archaic style. However, it’s not the pseudo-Shakespearian idiom he previously favoured. It’s modern English, but dated and overwrought.

At this stage, he’s irrationally obsessed with revenge against Merlin. There seems to be an incoherent mix of rationales, including (in no order whatsoever):

Modred is no longer possessed, but stated that even with the possession gone his “soul” was now “corrupted”. This may simply be a way to state that he’s now insane. During his clash with Quasar, he loudly claimed to be a dark discipline of Chthon.

(Madly ranting) “I was a good man… a good sorcerer, Merlin. If not for you, I”d never have fallen prey to the Darkhold ! The evil I do is your fault, and I must make you pay. And the more evil I do, the more you shall be held accountable !”

“You have battled your way to your final breath !”

“And now, let us take to the skies ! Let me lead you, my bird of flame, to where our esoteric energies need next to be put to use !”

“You insipid fool, you dare assault the dark disciple of an Elder God !?! You’ll pay for such effrontery !”

Modred could be a former enemy of Stalker, mentally broken and turned into an abject servant despite his heroic past. He could travel across dimensions to prepare worlds for the arrival of his crusading master, a bit like a Herald of Galactus but much slower.

Modred the Mystic (back in England)

Advantages:
None demonstrated (unless you use the Homo Magi Advantage).

… and the damage done

While he’s regressed to infanthood and in Bova’s care, Modred is very diminished. His Mental Attributes, INF and AUR are all down to 00, and his Physical Attributes are effectively down to 01. He’s in the middle of a Subplot where his awareness is that of a 2-year-old, give or take.

Modred cannot use his powers on his own, unless he’s shown how to do it, beseeched by Bova (or perhaps another mother figure), or dreaming. The latter apparently only occurs when he feels threatened, as Bova wasn’t aware that Modred could do magic.

The Queen would not approve

When Modred wore the Captain Britain costume, it was more powerful than it was for Brian Braddock at this point. For unlike Braddock, Modred is… a mystic !

When Modred used the Bands against Quasar, it was done in game terms in two distinct Phases. First he used 7 APs of Sorcery to have 6 APs of Snare with the Tightening Bonus. He also got a Blindside bonus since Quasar thought he could block this energy, only to realize too late that it was magic (and thus beyond the power of the Quantum Bands).

Then Modred simply followed up with a Sensory Block, with a +1FC Bonus that it targeted DEX/STR (since it was physically covering Quasar’s eyes). With the RAPs from the Snare lowering Quasar’s OV, it easily landed, and during that Phase Quasar was busy (vainly) struggling against the Snare. 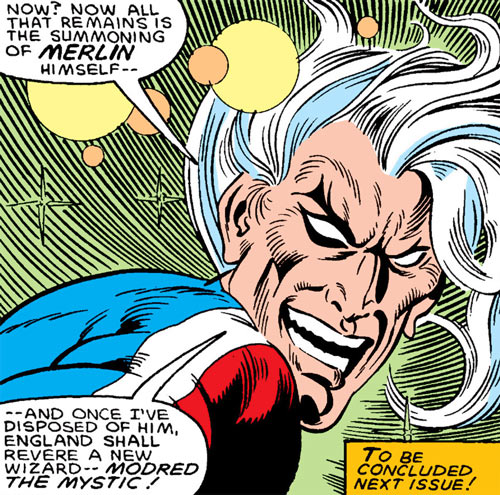 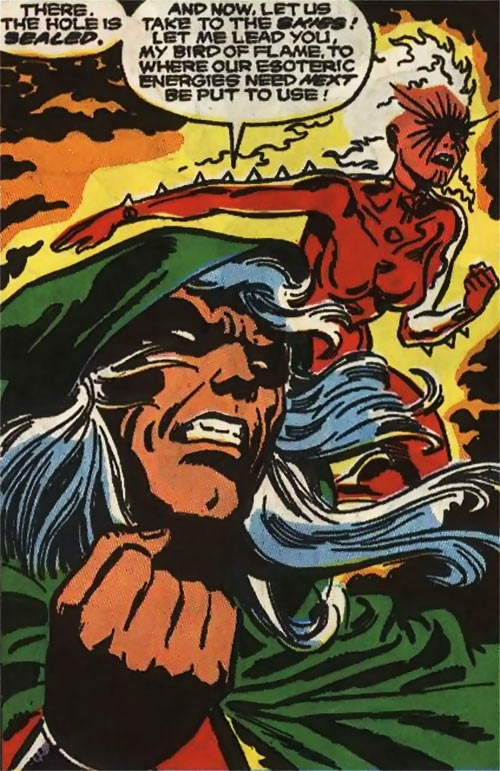 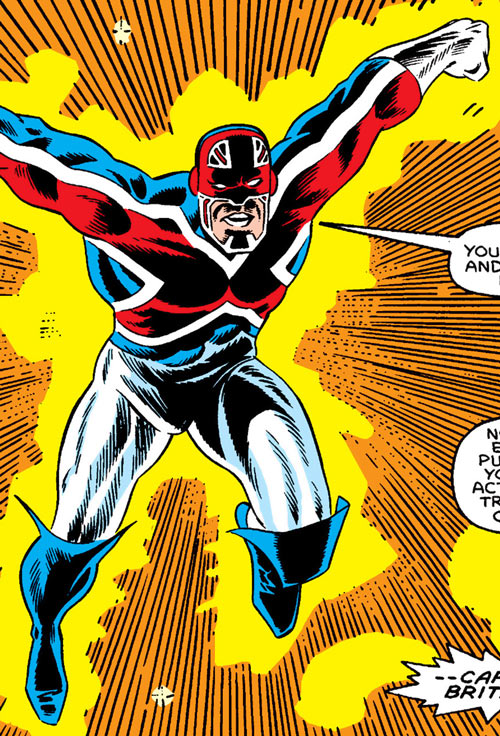