Moira has an eclectic mix of technical, medical and scientific skills. Nothing major, but by Capital Wasteland standards she’s fairly good at repairing and tinkering with stuff, and can provide some veterinary services.

She runs a successful (again, by Wasteland standards) supplies shop. It has a fair bit of stock, a robust selection of tools (including welding and smelting equipment) and a mercenary guard on retainer.

Moira is an avid reader, and a good writer.

Moira is reportedly from Canterbury Commons , a small hub for travelling merchants North of Washington DC. As a young adult, she leveraged her contacts with the caravans and her technical skills to establish a junk shop in Megaton , becoming one of the key businesses there.

In 2277, she roped the Lone Wanderer into doing “field research” for her. They co-wrote the book of Moira’s dreams – the Wasteland Survival Guide.

Brown printed several hundred copies and it was a best-seller, spreading even beyond the Capital Wasteland within mere years. The Guide is considered an essential resource for travellers, hunters… everybody who needs to adventure out of their settlement.

Note that the screenshots are of the Fallout 3 Redesigned  version of her.

Moira is Megaton’s leading space cadet. She has been called the Capital Wasteland’s Avatar of Endearitating (in a good way).

She’s zany, somewhat naïve, spontaneous, enthusiastic and clearly lacking in real-world experience. She nevertheless does a good job running Craterside Supply, presumably since she’s been steeped into the world of commerce ever since she was a child. 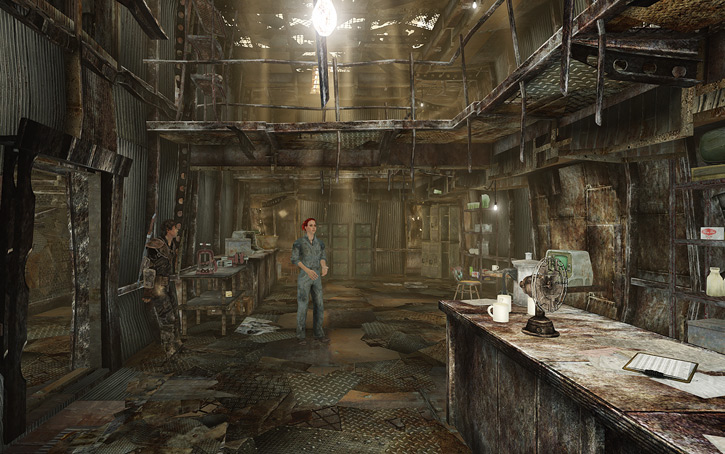 She keeps coming up with strange ideas for scientific experiments, and varied (and usually unworkable) schemes to improve the common lot. Since she is far more well-read than any 12 average wastelanders, she has a large knowledge base from which to draw her ideas.

However, she’s largely self-educated from reading random books, so she often lacks context and additional information to ground her ideas. Furthermore some of her education actually comes from novels, which she may not have always realised were fiction.

Moira has a good sense of humour and is generally pleasant company, provided that one isn’t a curmudgeon. If she can find a good “research assistant” for her weird projects, she’ll pay well and give results-based bonuses.

“I need an assistant to test my theories. I wouldn’t want anyone to get hurt because of a mistake. Nobody’s ever happy when that happens. No… Then they just yell a lot. At me. With mean, mean words.”

“I’ve been contemplating the possibilities of domesticating mole rats. I know it seems a little gross, but milk is milk and meat is meat, right ?”

(As the Lone Wanderer returns from dealing with a minefield) “How are those hot little potatoes ? Because, you know, they’re on the ground, like potatoes. And hot, because they… um… explode.” (long blank) “Anyway, what’s up ?”

(Lost in her book) “Huh. Did you know the human body can survive without the stomach or spleen ? Oh, what’s up ?”

“You know, I think I’ve found a new way to prepare radroach meat. Still tastes like old feet, though.”

“Oh, hey, don’t mind the smell. I was just testing a few chemicals, but it’s perfectly safe to breathe. Really !”

“Actually, right now I’m working on a book to help the world. And I could use a bit of help. I can pay you, and it’ll be fun !”

Advantages
Familiarity (Trading and traders in the Capital Wasteland, Bibliophile, Wasteland Survival), Misc.: if fatally irradiated Moira will become a ghoul rather than die.

Helper(s): Official Fallout 3 Guide (for a few sentences about her background), Roy Cowan.