In fact I considered making “giant henchman type” my own career, but I’m only 5’11”. Yet another dream dashed upon the harsh, dusty rocks of indifferent fate.

AFAIK this guy only appeared in Batgirl #46, in 2016. But this entry also has S P O I L E R S for every Catwoman storyline in 2015. Since I thought it useful to explain some backstory.

His name is presumably the Romanisation of 目撃, “to witness”.

Mokugeki is an unusually tall and muscular man, and an experienced martial artist and street fighter.

He’s not as fast as Batgirl or even Spoiler. But he seems to possess enough physical endurance to moonlight as a mad slasher in an horror movie. Spoiler delivering two consecutive hard staff hits to his head did hurt him, but not significantly.

Mokugeki’s gauntlets can extend Wolverine-like triple claws. These are almost 20′ long, and there’s obviously no way such long blades can be stored within the gauntlets. There was no hint about his weapons, but I’d err toward something magical.

It would make sense if each gauntlet also held a garrotte.

Mokugeki is a mob enforcer from Osaka. He seems to have a solid reputation among Japanese-related mobsters, including nikkeijin  mobs.

In 2016, he was hired by a Gotham City mob, the Hasigawa family. Traditionally, the Hasigawa have been a quiet, neutral mob. They seem specialised in dockside smuggling. However, they were uncharacteristically dragged into the big 2015 gang war.

Though it tore through the whole local underworld, this was primarily a conflict between the Calabrese family and Black Mask (Roman Sionis)’s mob.

The conflict saw complex machinations and secret alliances. Sionis critically misread one. He thought that the Hasigawa had an alliance with Catwoman and thus the Calabrese. Black Mask’s mob stormed the Hasigawa’s HQ, killing leader Hasigawa Tatsuo and most of his lieutenants.

This made everything immeasurably worse. His daughter Hasigawa Eiko rallied her syndicate and launched a war against all mobs but the Calabrese. A number of gangs were killed to a man, and most of the bosses were slain during a rooftop party.

Catwoman (Selina Kyle) apparently slew Black Mask. This was mostly to spare additional heat to Eiko, who secretly was her lover. Still, Hasigawa-san had to go deep underground. She was now wanted by innumerable gangs and police forces.

(These events take place in the two excellent Catwoman TPBs written by Genevieve Valentine  – Keeper of the castle  and Inheritance . Though IMO this storyline would have been worth 24 issues rather than 12).

Just before the massacre, Eiko’s friend Spoiler (Stephanie Brown) had pleaded with her not to give the order. Surviving Hasigawa lieutenants thus thought that Brown had turned against the syndicate.

They started hunting her down. Since Eiko-san was incommunicado, she couldn’t clear this stupid misunderstanding.

Since Spoiler was too tough for street soldiers, they contracted Mokugeki.

The hitman likely would have massacred Spoiler, but Batgirl was warned in time by underworld contacts. Together, Spoiler and Batgirl managed to immobilise Mokugeki for a time.

This allowed Batgirl to state that Spoiler was under Hasigawa Eiko’s protection, *and* that of Batman and allies. Though they couldn’t verify the first part with the boss, the Hasigawa enforcers agreed that Spoiler now meant too much heat. They fell back.

Mokugeki presumably was paid his retainer then flown back home.

https://www.youtube.com/watch?v=XckdPMRdw8A
Album version for download , or DVD/Blue-ray of a great concert .

During his establishing shot there seem to be belts loosely tied between his legs. Since this disappears in every other panel, I’d imagine it was a Iori Yagami reference.

He never said a word. He presumably doesn’t speak English, but he didn’t speak with the Hasigawa street soldiers either. It is likely a mystique thing, though he could also be mute.

His sartorial choices likely mean that he’s in his 20s.

The silent Mokugeki will begin every fight by holding up two cards – one blue, one red. His body language makes it clear that his opponent is meant to choose between the two.

Red symbolises blood, and means that Mokugeki will fight with his claws. Blue means strangulation, so Mokugeki presumably has a garrotte or two in his gauntlets.

His red and blue mobster tattoos follow the same theme.

He seems very popular among young toughs who know about the Japanese underworld. The Hasigawa soldiers treated him like a rock star. They were cheering on the fight as if it were a major pro wrestling match. Some had apparently bet on which card Spoiler would pick.

The tall enforcer seemed to like that. He even waved at the crowd once a colour had been chosen. Or should I say… shosen ? That was a joke .

Drawbacks:
May not know English.

There are only a few pages of material, so there are barebone stats.

He likely has other Skills, could easily have Iron Nerves, might be mute and/or disfigured, perhaps his oni mask had minor magical powers, he could have higher Mental and Mystical Attributes, etc.. 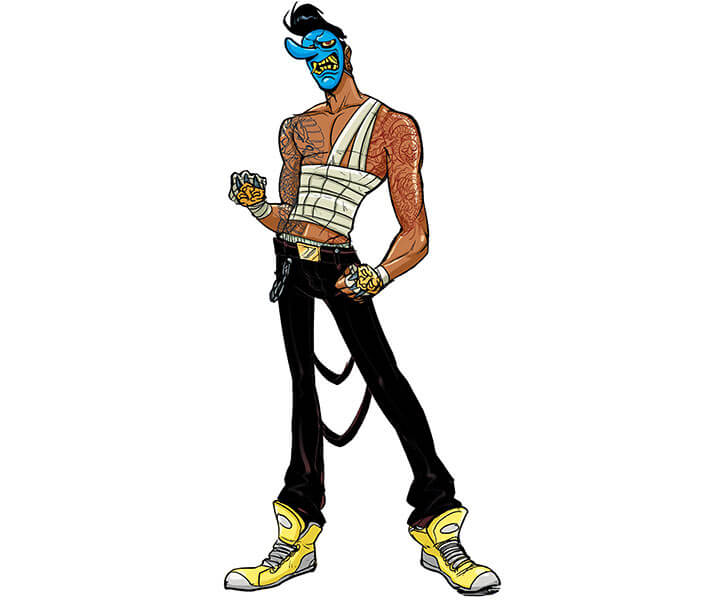 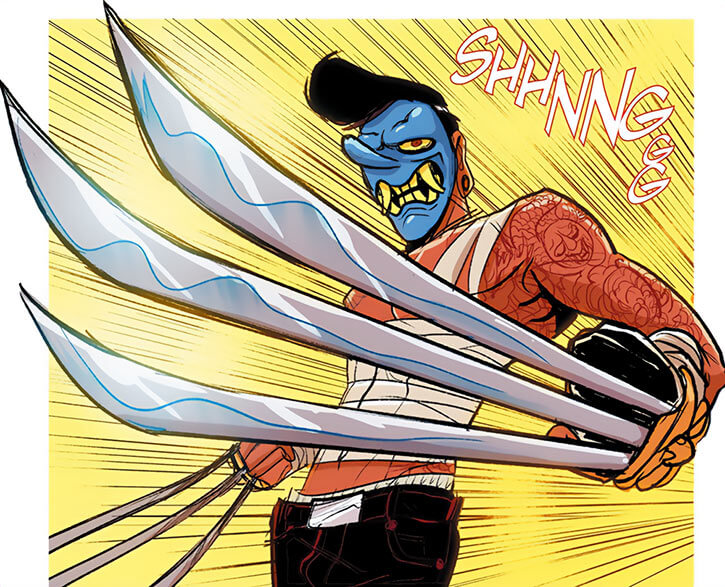