Perplexingly, DC chose to change everything at the last second and, well, the screwed the pooch. Especially if you were a fan of the Kesel & Kesel Hawk and Dove series.

However, we can’t simply complain. If we want to kvetch , we have to also make extensive constructive proposal. It’s in our contract. So here’s Roy take on the matter. It’s an imaginary continuity where the original choice for who was Monarch remain unaltered.

This profile is meant to be read *after* the Captain Atom (Elseworlds) write-up.

Monarch is an older, more experienced version of Captain Atom. He possesses all of his abilities and then some. More than a year of fighting deranged metahumans of immense power in a post-holocaust wasteland, followed by the extermination of every metahuman on Earth, has honed Monarch’s abilities to an extent far beyond that of his younger counterpart.

Monarch has reprogrammed the Kryptonian device known as the Eradicator and now uses it as a battlesuit. Monarch has access to vast amounts of knowledge regarding metahumans and hidden resources in our time. That includes the ability to infiltrate and control any modern computer system.

Played properly, Monarch can be a Darkseid-level opponent.

See my Captain Atom (Elseworlds) write-up to get Monarch’s history up to the current time. Except that he did not encounter his future self in his timeline.

Four years in the future, in the midst of the Outer Gods Invasion, Captain Atom was at ground-zero of a massive blast. It destroyed the Outer God’s Avatars’ spearhead in Philadelphia. This blast catapulted Captain Atom 17 years into the future. He reappeared in a blasted wasteland that was barely habitable by him even with his powers.

He spent the next year and a half wandering the Earth for clues as to what had occurred. He also was looking for a means by which he could return to the past and prevent the catastrophe.

His only encounters during this time were with various incredibly powerful and completely deranged metahumans. These would inevitably battle him to the death, usually making incoherent claims about Captain Atom’s culpability in the current state of the Earth.

The Captain’s wanderings came to an end when he came across two old supervillains: Lex Luthor and Vandal Savage. They were the only sane survivors of the great catastrophe, and they told Captain Atom what had occured.

(Insert events of Kingdom Come here. Only in this future the battle at the Gulag was not stopped and eventually spread until it destroyed the Earth’s biosphere.)

With Lex Luthor’s genius, the three were able to devise a way to return Captain to the past. Their hope was to prevent this calamity. But the villains had sorely underestimated how much Captain Atom’s experiences had hardened him.

After Lex Luthor completed the mechanism for Captain Atom’s return, he told the pair that he refused to allow them to outlive his friends. He vaporized them both, firing Vandal Savage’s remains into the sun to ensure he would not return.

The return trip was so strenuous that Captain Atom barely survived. Still, he arrived in his original time shortly after he had left. He was obviously a changed man, but this was attributed to the events that had occurred during the Outer Gods Invasion.

A year followed. Captain Atom analyzed the situation in every way possible without alerting his fellow heroes. The conclusion was always the same. Within two decades a metahuman  conflict would break out which would result in the destruction of all life on Earth.

The only way this catastrophe could be averted was to eliminate all of the currently existing metahumans. Then it would be necessary to establish a strong enough controlling power that any future metahumans could be identified and contained or killed at birth.

Captain Atom spent the next year marshalling his resources. In order to increase his power as well as provide himself with protection against mystical attacks, Captain Atom sought out and reprogrammed the Eradicator to serve as a personal weapons platform.

Captain Atom also entered in secret negotiations with the alien Dominators. He agreed to provide DNA sample from various meta-humans in exchange for logistical support. They provided a massive super-computer hidden on the moon. This is the one that Hank Hall referred to in Armageddon 2001 #2, which is about the only thing I’m using from THAT issue.

(This computer later became the foundation of the Dominator moon bases hidden under the lunar surface in the 30th century. At least if you’re going by the Giffen/Bierbaum run before the current version of the LSH.)

Against the Great Disaster

Two years after his return from the future, Captain Atom put on his battlesuit, and became Monarch.

His first strike was against the JLA and other metahuman groups that would have opposed him. With the twin advantages of planning and surprise, he easily crushed them. Within a matter of weeks, Monarch and the forces that had assumed his banner ruled the Earth.

Some capitulated out of fear. But many surrendered control to him because he seemed to have the strength those turbulent times needed.

He also “exposed” the Dominators and destroyed the ones present on Earth. He publicly threatened to personally destroy their world if they returned. He contacted them privately and confirmed that he could do what he had threatened to if necessary. He then berated them for seriously expecting him to turn over parts of his former allies or even his enemies for experimentation.

In the next few years the Earth was transformed into a peaceful and orderly, almost sterile utopia. That is, if one overlooked the continuous small rebellions and Monarch’s growing rage. The guilt of his actions and the overwhelming responsibility of maintaining strict order over the entire world began to affect his sanity.

Monarch directed some of his efforts toward researching time travel. His hidden hope was that he might be able to go further back and perhaps achieve his goals through quiet manipulation rather than overt bloodshed.

During this research, Waverider was created (see Armageddon 2001 #2). Waverider went into the past. His hope was to find the hero that became Monarch and stop him before he could commit the acts that brought him to power.

Monarch quickly recovered and escaped. He has garnered enormous resources in the current time by annexing various hidden fortresses and infiltrating almost every major computer system on Earth.

Monarch is currently monitoring the world’s metahuman population. He is either alerting his younger counterpart to potential dangers or covertly dealing with them himself. He is also preparing for coming threats of which only he has foreknowledge.

Monarch’s battlesuit is dark metallic-blue with gold trim. Monarch himself outside of the suit is a white-haired, blue-eyed, Caucasian male in good physical health. Though he is not quite 40 years old yet, he looks about 50.

In his quantum-powered he is completely silver except for blue “boots” and red “gloves” and an atomic-power insignia. All of these are laser-etched onto his exo-shell and thus actually a part of it.

Very cold and calculating. His speech and behavior tend to be very formal, an overcompensation for the emotional turmoil he feels regarding his actions.

He is never expresses much emotion except when he is in one of his rages, during which he strikes out at full capacity at everyone and everything in his vicinity.

“I seized an entire era through daring and initiative.”

Drawbacks:
Authority Figure (in his own time only), Guilt (Murder of Every Superhero and Supervillain), Secret Identity, CIA (Averting Genocide At All Costs), Catastrophic Rage, Controllable Alter Ego.

The MBT Scholar Advantage subtracts -2CS from the OV of most Superhuman opponents, representing an extensive database on their individual abilities and tactics.

The GM may decide to reduce this bonus to -1CS or 0 against certain individuals. This data reflects more experienced versions of the characters in alternate futures, and this timeline may have diverged sufficiently in some cases to render the information partially or totally incorrect.

The penalty may also be reduced due to the “Grandmaster Effect”, being thrown off by novice maneuvers when accustomed to champion-level strategies. Kryptonian life forms and technology (such as Superman or the Cyborg) always suffer a -2CS to OV, due to the Eradicator’s comprehensive knowledge of them.

Monarch also found a way to invert the Eradicator’s vulnerability to magic. This is based on the essentially conflicting nature of magic and science in the DCU. It gave the suit a “reality anchor” that provides powerful protection against mystic powers (Magic Field).

Controlling the Eradicator Battlesuit requires a physical link with the wearer. Thus, the Captain cannot assume his quantum-powered form while using it. But this actually has an added advantage: while linked to the suit the wearer’s and the suit’s minds “overlap”, creating a mental fog versus telepathic attacks (Mental Shield).

Monarch can switch between his quantum-powered form and his battlesuited form at will. This is done by “absorbing” the Eradicator’s energy-matrix when he extrudes his exo-shell, then “re-emitting” the Battlesuit when he returns to his human form (Insta-Change).

The Eradicator Battlesuit cannot act independently at the moment, though that potential still remains. Monarch can Team-Attack Mental tasks with the Eradicator’s Mental attributes and Skills, but cannot use its Initiative or HPs.

The Eradicator’s drive to recreate Krypton has been modified to preserve the order of Monarch’s equally-sterile high-tech utopia. Furthermore, it is probable that Monarch has reprogrammed the Eradicator with orders to continue his legacy if he should die.

It is also possible that others might exploit the Eradicator by somehow rebooting his original programming, which might very well put him at odds with Monarch.

Skills, Advantages, and Drawbacks as above. 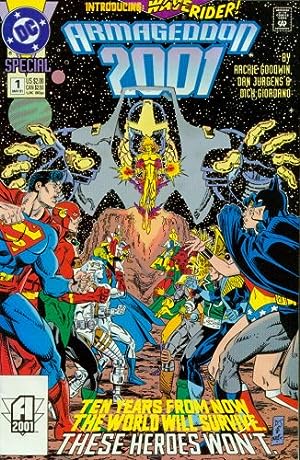