Superhumanly strong, tough, and fast, Mongoose is able to lift at least 10 tons, and can run rings around opponents, sometimes moving too fast for them to see.

His sharpened teeth can also be used as a weapon if he can get close enough to an opponent. His heightened senses allow him to identify people by scent, which he can recall months later.

While he first appeared working for the High Evolutionary, Mongoose doesn’t appear to be one of his New Men. Count Tagar described him as “not truly one of us”.

Mongoose was sent to New York searching for Thor, but had to await his return. While there, he was approached by Baron Helmut Zemo about joining his Masters of Evil, but refused.

Thor eventually returned. Mongoose tracked him to a building site, where he attacked him in his civilian guise. The commotion drew the attention of Spider-Man. Mongoose proved unable to deal with both, but managed to escape, leaving the pair to stop a half-built skyscraper collapsing. During his escape he also toppled some girders onto architect Eric Masterson.

Directed by Count Tagar, Mongoose recruited Quicksand to engage Thor in combat. The job was to obtain a cell sample, which the High Evolutionary wanted to create new gods. Quicksand succeeded in drawing Thor out, and they got the needed sample. 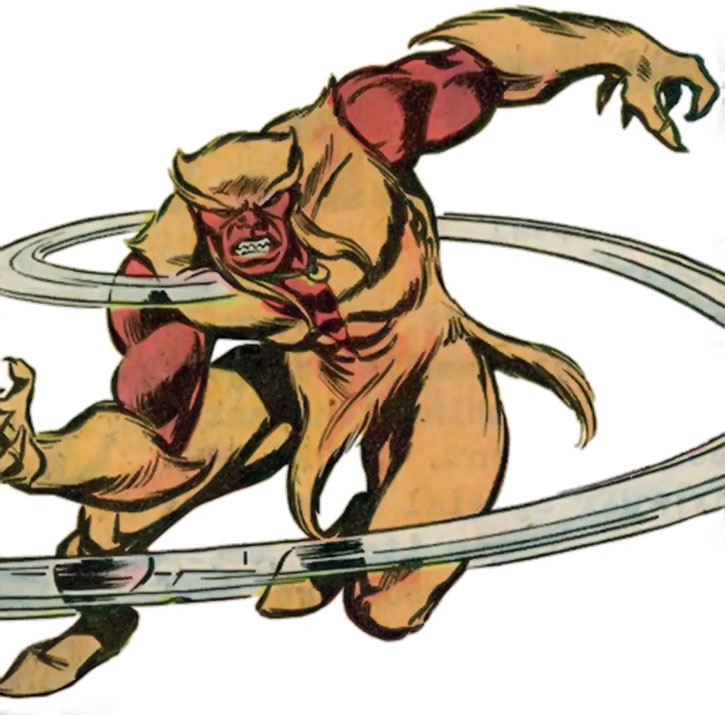 Thor soon arrived there, to be immediately attacked. But Tagar was uncomfortable with attacking an ally, having wanted the additional cell samples acquired with subtlety. Thus, he called a ceasefire. Mongoose skulked away before the truce was made, watching events from the shadows.

Thor and Masterson helped Tagar and the New Men free the High Evolutionary and Hercules in the Black Galaxy. Mongoose waited until they were back on Earth before making his move. As Thor, Masterson, and Hercules left Wundagore, Mongoose uses a borrowed Asteroid Smasher to shoot them from the sky.

Hercules was sent a distance away, and Mongoose kept Thor on his back foot. He nearly managing to kill him but Masterson, lifting Mjolnir, charged. Masterson took the blast intended for Thor Odinson.

Hercules reached the battle by this point. With Thor having gained his second wind, Mongoose didn’t hang around. He left them to deal with the fatally wounded Masterson.

Working for the serpent god

Mongoose next worked for Seth, the Egyptian God of Death. Along with Quicksand and Bison, had been dispatched to steal the secret Inferno-42 compound from S.H.I.E.L.D.. Breaking into the facility housing it, they were opposed by Luke Cage and Thunderstrike (Eric Masterson). 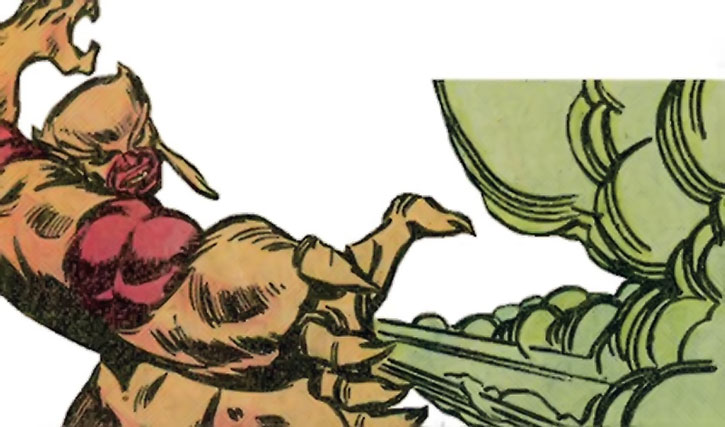 Mongoose’s presence threw Masterson off initially, nearly costing his life. But Thunderstrike managed to overcome his fear, temporarily blinding Mongoose. However S.H.I.E.L.D. flooded the installation before the fight had finished, allowing Mongoose the opportunity to escape again.

Still partnered with Quicksand, Mongoose, wearing glasses which presumable protected his recovering vision, was again dispatched on a covert mission by Seth. However, Mongoose’s temper got the better of him. As a result they were spotted when they shouldn’t have, and they were soon attacked by Bloodaxe. Bloodaxe would have killed Mongoose had Thunderstrike not interceded.

Quicksand suggested they get away while Thunderstrike and Bloodaxe fought. Yet Mongoose’s hatred for Thunderstrike forced him to attack. Mongoose and Quicksand lost the fight, but may have escaped while the other two continued to battle.

He’s later identified as being a part of the Fifty State Initiative. But it’s not known where he was stationed.

Captured by Altosha Kraven, Mongoose was placed in a zoo with other animal-themed super-humans. He only escaped when the Punisher sabotaged the facility.

Aggressive and feral, Mongoose has no hesitation in entering combat. He takes a savage delight in battle as he mocks his victim’s slowness.

He rarely holds back, seeming to take pleasure in killing even when it’s unnecessary. Mongoose doesn’t employ subtlety unless his boss is present. He prefers to be viciously straightforward in his strategies.

His reasons for working for the High Evolutionary or Seth are unclear. But Mongoose would seem to be mercenary rather than to achieve any goals of his own.

“The time has finally come for me to complete my mission, to hunt him down — and to feast on his living flesh !”

“You and the Thunder God humiliated me — and turned Wundagore against me ! I can only regain my honor and self-respect… by crushing you !”

“I can land a hundred blows before you can even aim one !”

Bonuses and Limitations:
Superspeed doesn’t sub for Perception Checks (-1), or subtract from time to perform a task (-1).

Equipment:
He wears a pair of gloves with artificial claws, which can also spray a small cloud of sedative gas. It’s unknown whether the gas has an Ammo limit, but he’s used it at least twice in one appearance.
GLOVES [BODY 04, EV 02 (10 w/STR, 12 w/Superspeed for EV), Chemical Attack (Range of 1 AP): 10].

A Matter of Honour

If beaten in single combat, Mongoose develops a vendetta, seeing it as an affront to his honour. As a result he’ll develop a SIH towards whoever it was that beat him, such as he did when Thunderstrike blinded him.

If the opportunity presents itself, he finds it hard to resist attacking these enemies, regardless of whatever else is going on, or whatever mission he’s on.

When he does face his enemy, he may well feel the need to face them toe-to-toe, without his usual dodging style of fighting. Thus he won’t use his Superspeed, and prefers staying in close to his opponent.

Prior to his last time working for the High Evolutionary he’d have had a High connection to him, or his subordinates, but that’s probably been lost.

After being blinded by Thunderstrike, he had a MPR for a few months. His Partial Vulnerability became full (Attack Vulnerability (-2CS OV/RV vs bright lights)), and he wore a VISOR [BODY 02, Shade: 04]. He also developed a SIH of Thunderstrike until his death, as described above.

There’s also a few pieces of equipment he’s only been shown using once each:

I’d considered a higher DEX and having Running rather than Superspeed. But he can dodge attacks from Spider-Man when fighting defensively, and yet gets hit by less agile bricks while fighting offensively. So some of those can be classed as subbing his Superspeed for EV, leaving him vulnerable. 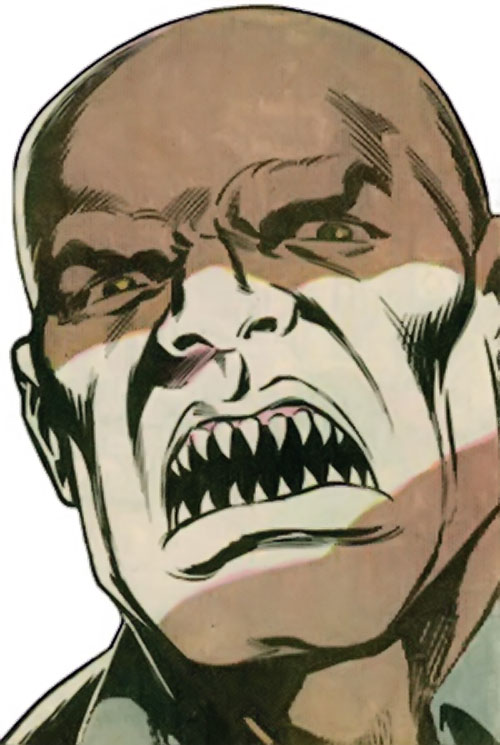 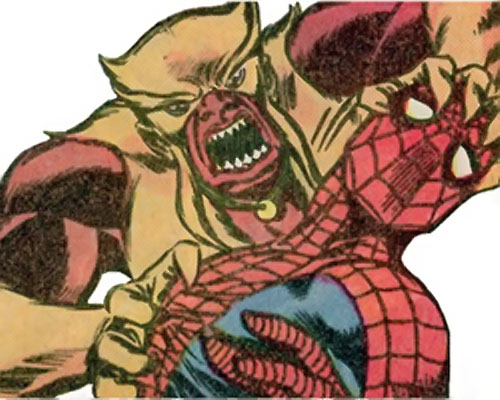 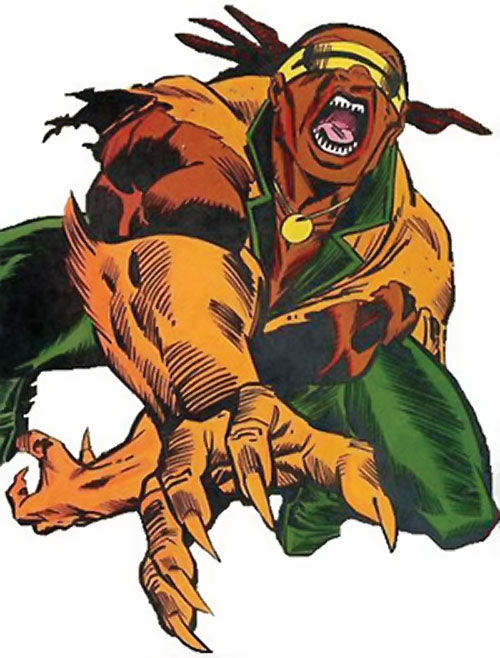 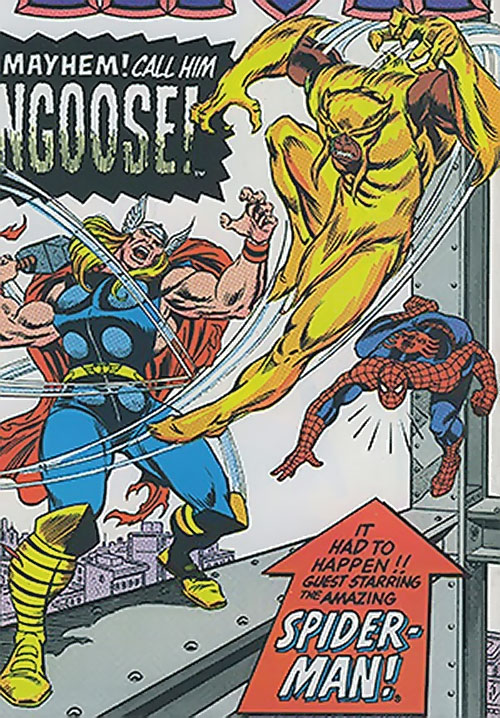 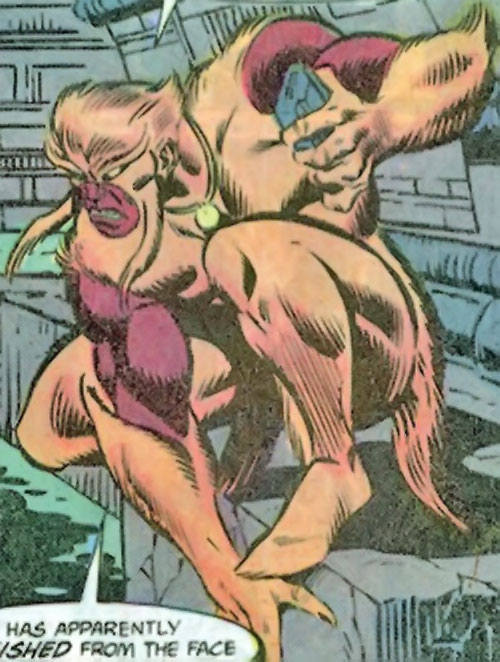