By the time Monk was reunited with Doc Savage, he was well on his way to earning a reputation as one of the world’s foremost chemists.

However, there were others aspects to his formidable talents – the most remarkable of those being that his physical strength was nothing short of phenomenal. Monk could fold a half dollar between his thumb and forefinger and bend a gun barrel nearly double. His agility was also matching his anthropoid countenance.

Though an accomplished knife-thrower, Monk was only a fair marksman with a firearm.

While somewhat coarse, he was also remarkably clever.

Andrew Blodgett Mayfair was born in Oklahoma sometimes around 1897. He gained a reputation as an oil-field brawler in his teens; earning him the sobriquet “Monk”.

In 1915, Monk was in Italy as part of a student tour group when that country repudiated its long-standing treaty with Germany and joined the Allies during World War I. Monk signed on with the Italian army and was quickly awarded the rank of captain.

In 1917, when the USA entered the war, he transferred to the U.S.Army as a lieutenant colonel. Assigned to the front in France, he met Theodore Marley Brooks, soon to become a brigadier general. The two men became inseparable, despite the cruel and often dangerous practical jokes they played on one another.

While on an unauthorized scouting mission, Monk and Ham were captured by the Germans and held in the Loki prison camp. This is where they first met “Doc” Savage. After their escape and the Armistice, both men returned to New York. Monk to finish his education and Ham to set up practice as an attorney.

A few years later, when the Man of Bronze returned from his meditations to start his crusade, they both joined his team of operatives.

Monk is one of those people who are walking contradictions. He is a brilliant chemist and a brutish animal.

Monk is kind. In fact, he has a small child-like voice, but when he fights, he roars. It is amazing that one man can make so much noise in a fight. Over bedlam, Monk’s roaring can be heard. He has been know at times to stand in the middle of a fight and yell bloody murder merely for the sake of the noise.

Monk can also be cruel. He has no qualms about hurting or even killing villains. But deep down, we all know he is a kid at heart.

Without a doubt, Doc Savage is his idol. He and Doc share a closer bond than do any of the other four aides. One gets the feeling that they really do love each other as brothers. Monk would die for Doc if it were necessary to save the Bronze Man. Yet, Monk is the only one who can go directly against Doc’s orders and get away with it.

Monk is a connoisseur of feminine beauty. To most Monk is the homeliest man they have ever met. He has a face that can make babies cry. Monk’s homely looks has an opposite effect on some women. The mother would probably find Monk charming. Certain women were attracted to him either by sheer animal attraction, or pity.

But Monk doesn’t care why a girl likes him, he isn’t particular, especially if the girl is a looker. And Monk knows how to pick ’em. He boasts that he has the prettiest secretary in New York in Lea Aster.

Of course, Monk’s favorite past-time is getting Ham Brooks’ goat. All Monk needs to do is mention anything having do with pork.

“There’s two guys in this world I don’t like and they’re both you.”

Short, hairy and with long arms, Monk is often compared to an ape by friends and foes alike. His mode of dress and language also mark him as cruder and dumber than he really is.

An interesting idea is to explore Doc’s training and adventures as a youth with the DCU as a backdrop. Meeting up with Rima the Jungle Girl in the Amazon. Getting shot down by Enemy Ace in the War. Or even learning how to shoot from none other than Jonah Hex.

Of course, a mysterious chemist with great strength in the DCU probably has connections to Rex “Hourman” Tyler and Miraclo.

One other possibility, only because these *are* comics. Doc Savage would almost certainly have either an arrangement or ongoing feud with Vandal Savage, for obvious and not-so-obvious reasons.

In Philip Jose Farmer’s pastiche novel A Feast Unknown, Doc learns that he is the result of a careful breeding program orchestrated by his ancestor, an immortal Old Stone Age man named Xau Xaz (thus, Doc’s large size and great strength — he has caveman blood !).

Xau Xaz is one of “The Nine”, a powerful group that secretly influences world events for their own selfish purposes. Substitute Vandal for Xau Xaz, and you’re all set !

Equipment:
Monk would sometimes wears an equipment vest or wield a Superfirer, among other gadgets built by Doc Savage.

Monk’s pet pig, Habeas Corpus, is trained to attack his enemies, chew through ropes and spit tobacco juice into Ham’s pockets, among other things. 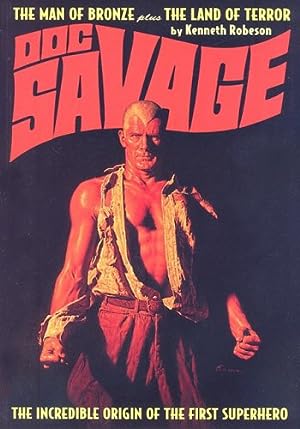