When he was a child, Luffy ate by accident a Devil Fruit called Gum Gum. This turned him into rubber. That fruit also leaves the user unable to swim, but Luffy didn’t know to swim before, anyway. He has learned to take advantage of it to improve his speed, strength and surprising his enemies with ranged, melee attacks.

Luffy has demonstrated superhuman strength due to the extensive, cruel, devastating training by his grandfather. The Gum Gum enhanced this.

Luffy was trained from a young age by his grandfather Garp. Later Garp left Luffy and Ace in the care of a friend to continue his training. When Luffy was 7, he met a gang of pirates led by a man named Red-Haired Shanks.

After befriending them, Luffy decided that he wanted to become a pirate as well. It was at this time that Luffy cut himself under his eye to show he was tough enough to join Shanks’s crew. He swore over Shank’s hat that one day he would be the pirate king.

During his time spent with Shanks, Luffy accidentally ate a Devil Fruit when it was left in an open case. The fruit turned Luffy into a rubber man capable of stretching, inflating, and bouncing back impact-based attacks. Because Luffy did not know the nature of the fruit, Shanks and his crew did not hold the incident against him.

They remained friends, but Luffy seemed to grow even more defensive of Shanks’s seemingly meek band of pirates.

Luffy later stood up to Higuma the Bear, a local mountain bandit that insulted Shanks and his crew. The youth was beaten, held hostage, and almost killed by a Sea King monster. While Shanks rescued Luffy, the incident cost Shanks his left arm. Shortly thereafter, Shanks set sail along with his crew. 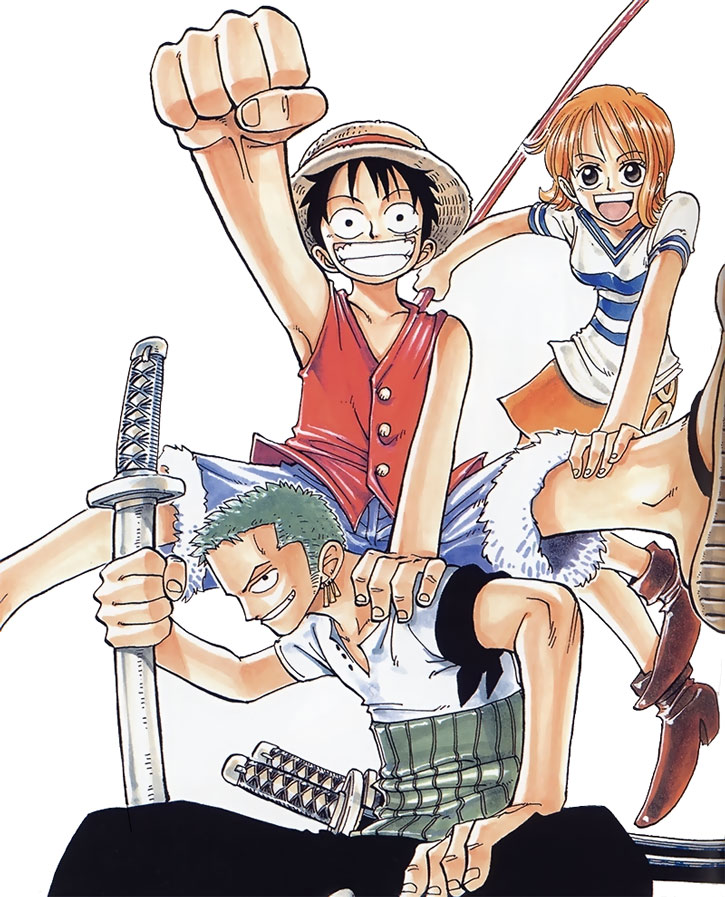 Before he left, he and Luffy promised each other that one day Luffy would surpass Shanks and become the Pirate King.

Shanks left Luffy his straw hat as a parting gift. Luffy has since worked on upholding the promise to return it to him some day. Shanks’ hat is his most prized possession. Luffy became enraged when Buggy and other pirates damaged his hat in their fight.

Luffy has since worked diligently on keeping that promise and is known famously as “Monkey D. Luffy”, or simply “Straw Hat Luffy”. Luffy now aims not only to be a grand pirate, but to become the Pirate King. Most people do not take his goal seriously, until they see his incredible strength.

I shall become a pirate king

While the exact details of his training are unclear, it is known that his grandfather trained Luffy for a time by throwing him into deep valleys, leaving him alone in dangerous forests in the middle of the night, and tying him to balloons over high altitudes. All for the sake of making Luffy stronger.

Even the Marines started to take Luffy more seriously after he defeated the villainous Marine Captain “Axe-Hand” Morgan and several known pirates such as Buggy the Clown, “Pirate Admiral” Don Krieg, and Arlong The Fishman. A 30 million Beli reward was placed on his head after he defeated Arlong.

This reward eventually became 100 million Beli after he defeated Sir Crocodile. Now, the World Government deemed him a serious threat for beating one of their Shichibukai. After the events of Enies Lobby he received a bounty of 300 million Beli. This gives Luffy the highest known active bounty, and the third highest bounty known so far.

During his voyage, Luffy has had a few meetings with the Marines, from the not-too-serious looking return of Ironfist Fullbody, whom Luffy met first at the Baratie, to Captain Smoker of Loguetown, to Admiral Aokiji and, most recently, with his grandfather Monkey D. Garp.

Luffy has passed several islands on his way to and along The Grand Line, including Drum Island, Little Garden, Alabasta, and Skypiea. He has met many new allies, as well as making several enemies, such as Buggy the Clown, Wapol, Sir Crocodile, Enel, CP9 and the entire World Government.

While on his voyage, Luffy also found out the identity of his father, Monkey D. Dragon, and that his father is still alive, details that before had been unknown to Luffy.

His trademark straw hat (from which he gets his nickname “Straw Hat Luffy”) was entrusted to him by the legendary pirate captain Red-Haired Shanks. Aside from his hat, Luffy’s customary outfit is a red vest, blue trousers, and sandals.

Luffy has a scar on his left cheek, beneath his eye, which he gave himself as a child to prove that he was mature and unafraid of pain (also to possibly look more like Shanks who is his idol). He has short black hair and black eyes.

Unlike the other main characters, Luffy wears the same outfit for most of the series. As he travels, he may change into clothing that is appropriate for the climate (as in the Drum Island or Alabasta story arcs). During the Enies Lobby arc, he wore a pair of black shorts because they had pockets he could use to carry food.

Luffy is the captain of the Straw Hat Pirates and, considering them his best friends, values them over all else. Even though they are all usually annoyed by his immaturity and seeming stupidity, they all respect him for his strength and his qualities as a leader.

At first glance, Luffy does not seem too intelligent. He often sees things in childish manner and can easily be amazed by the simplest things. However, because he views the world in such a straightforward and simple manner, he is frequently the only person who can see what should be done.

He likes to poke fun at other’s imperfections and character traits, even though he is rather worse himself.

Although Luffy is fairly lighthearted, he has an unstoppable sense of determination, optimism, and courage. He will do anything to stand up for his friends and comrades. Ever since consuming the devil fruit he has not worried about his inability to swim, much like his brother. Many of these traits are common among Ds.

The only thing which seems to frighten Luffy is his grandfather; the mere mention of him intimidates Luffy to such an extent that he does not fight back.

Luffy never kills any of the villains, no matter how cold-hearted they may be. Instead, he frequently sends them flying, knocks them out, or leaves them beaten into submission. Consequently, it is not uncommon for Luffy’s former opponents to come after him for revenge, such as Buggy the Clown and Alvida.

Oda explains that it is not a question of morality so much as a matter of punishing the villains for their crimes. He feels that killing the villains lets them off too lightly, whereas allowing them to live and see their dreams ruined is a far more fitting punishment

Luffy’s dream is to find the One Piece and become Pirate King. He knows that to achieve his goal, he will have to defeat many strong opponents, including the World Government and his childhood hero Shanks.

Usually when he asks someone to join, Luffy is turned down completely. Later on the person in question will join anyway (mostly happens after Luffy defeats the main villain of the current arc). The major exceptions to this rule are :

Luffy doesn’t seem to mind if someone he wants to recruit has a profession or not, asking anyone who is interesting or allowing anyone who wants to join to become a crew member.

“Have you heard of the awesome treasure at the end of the sea ? The guy who claims it will be Pirate King ! Are you as psyched as I am ? There’re unbelievable adventures just waiting for us !”

“One day I’ll have a ship and crew better than yours !! And we’ll have the biggest hoard of treasure in the world !!”

“The world’s greatest swordsman, that’s great ! And it’s fitting since your new boss is going to be King of the Pirates ! Anything else would make me look bad !”

“DYING IS NOT REPAYING A DEBT !!! THAT’S NOT WHAT HE SAVED YOU FOR !!! ONLY WEAK MEN WOULD DIE AFTER SOMEONE SPARED THEIR LIVES !!!”

“Of course I don’t know anything about swords, you moron ! I can’t navigate ! I can’t cook ! I can’t even lie ! I know I need friends to help me if I want to get ahead in life !”

Tom Longacre (Stretch, from Hero Hotline), bought in 1940 a very old pirate novel dated from the late XVIIIth century called One Piece. It spoke, strangely, of superpowered pirates who went around the world in search of an incredible treasure. The novel had no author but what seemed to be an alias “As told by Monkey D. Luffy”.

Out of curiosity Tom started to investigate and discovered that not only the story was true, but that Monkey D. Luffy had in fact existed. He had fought the likes of R’as al Ghul, Vandal Savage and Johanna Constantine, and that he had gotten his powers from a mutant fruit grown from the rare Gingo tree.

Longacre travelled to a lost island in the middle of the Pacific and got a supply of Gingo that helped him start his career as Stretch. Some years latter, he found that a popular soda called Gingold used the same active principle and used it as the source of his powers.

Of the One Piece treasure, on the other hand, Tom did not discover a single clue. Maybe it’s still hidden on some forgotten pirate cave, maybe someone found it and its descendants are still spending it. Maybe the Wayne family !

Advantages:
Iron Nerves, Lightning reflexes, Rank: Captain, Misc.: can eat while sleeping. He also knows how many meals he has missed while sleeping or unconscious (to him, 5 meals is a day), thus knowing how much time he has been out (10 HPs).

Bonuses and Limitations:
Shrinking is always on (-1). 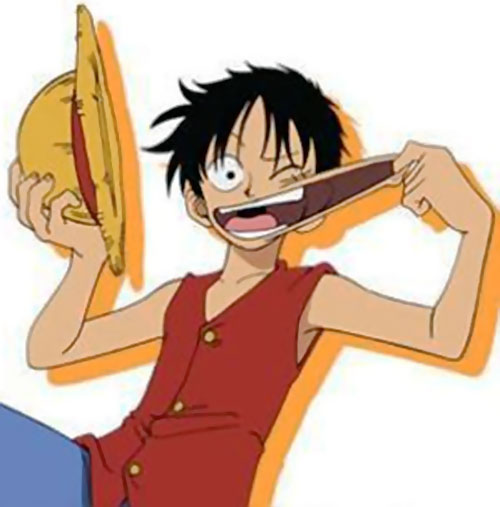 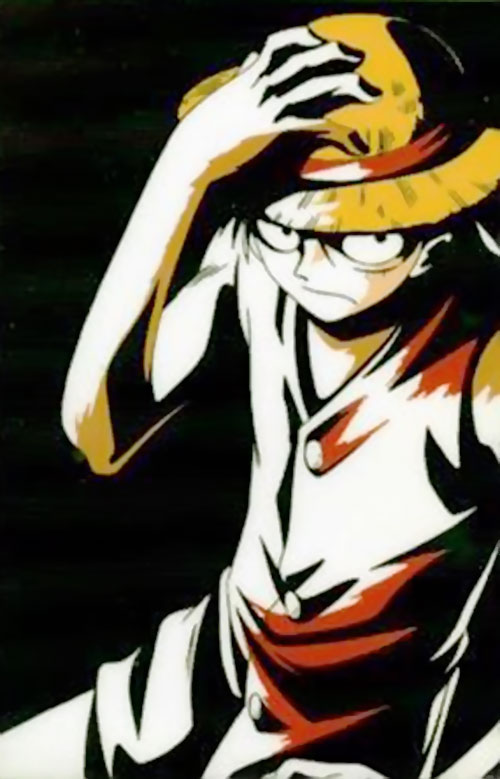 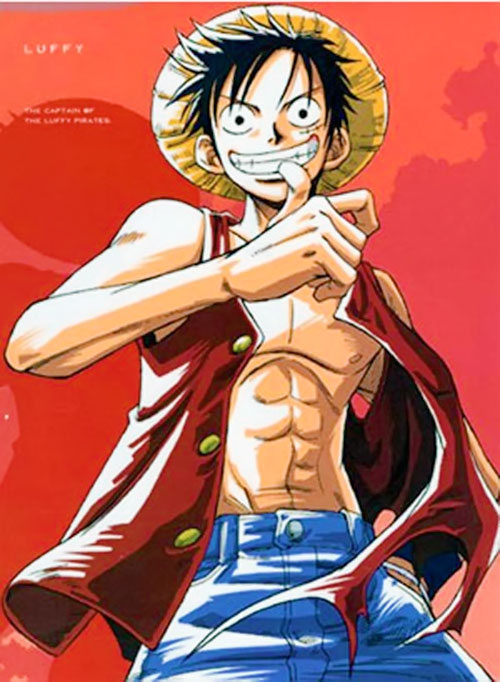 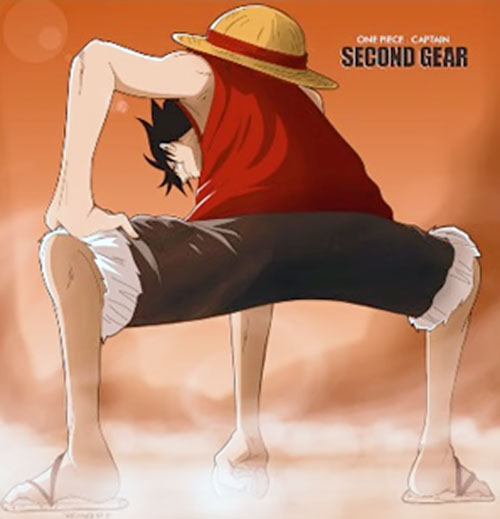 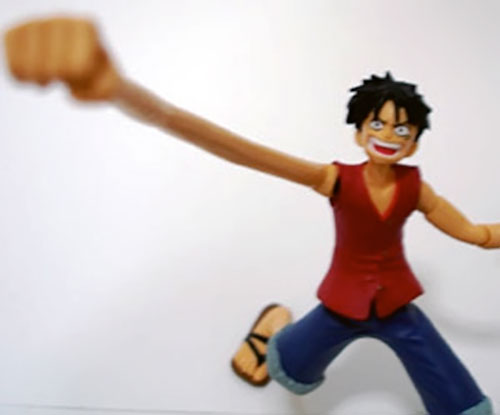 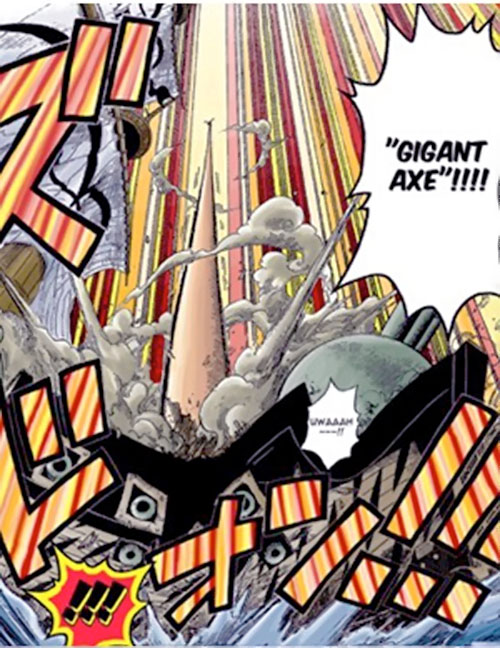