The Monkey king is a powerful Immortal, capable of wreaking havoc in heaven, and fighting off its most powerful generals without breaking a sweat. His very presence can cause terror in even dragons should he wish it, he can grow to the size of a mountain or shrink to the size of a tuft of hair, and can shape change to become anything from a fish to a full temple complex.

He can tell by scent if a being is mystical by nature or not, and see clearly 300 miles away. After his time in the Eight Trigrams Furnace, he is virtually immune to any form of heat or flame, and his time studying to be an Immortal has rendered his flesh nearly impervious to even heavenly or demonic weapons.

His strength is unheard of, and agility and skills almost completely unmatched. He can cover 36,000 miles in a single somersault, or somersault to Heaven and back again. He can survive 500 years or longer without food or drink besides (the thoroughly unpleasant and definitely not nutritious) iron pellets and molten copper (against his will).

He is sneaky and can manage to get out of nearly any circumstance.

He is also virtually unmatched in battle with his main weapon, the “As-You-Will Gold-Banded Cudgel”.

Wukong was born a monkey from a stone born from the mating of Primal Chaos and the sky. He jumped through a waterfall on the monkey’s island, the Huaguo-shan (mountain of flowers and fruit). There, he discovered the Shualiàn-dòng (water-curtain cave or waterfall cave). The other monkeys proclaimed him Mei Hóuwáng(handsome monkey-king) for his feat.

After celebrating, he soon realized that he was still a normal monkey; he wanted immortality. Determined to find immortal beings and learn their ways, he traveled on a raft to new lands, finally finding the Patriarch Subhuti and becoming his disciple.

Subhuti rejected him at first, but Houwang’s determination, and eventually his intelligence, impressed the Patriarch. It was from him that Houwang received the Buddhist name Sun Wukong (Wukong meaning “aware of emptiness”).

Under the Patriarch’s teaching and training, he acquired the powers of immortality, shape-changing, and cloud-traveling. He also learned a technique called the Jindouyún (cloud-somersault), where one can cover 36,000 miles in a single somersault.

Sun Wukong was taught the 72 “earthly methods of transformations”. He picked this when his master, Subhuti, offered a choice between the 72 earthly transformations and 36 heavenly ones. These transformations apparently cover every possible form of existence, i.e. people, objects, etc.

He was given three special hairs by Guanyin (who received them from the Buddha himself), which could be used in dire emergencies. All the other hairs on his body could be transformed into clones of himself.

Wukong became proud of his new abilities, and began boasting to the other disciples. Subhuti was not happy with this, and they parted ways. Subhuti was certain that Wukong would get into trouble, so he made Wukong promise never to tell anyone who had been his teacher.

Wukong eventually obtained an “as-you-will golden-banded staff” known as the Rú Yì Bàng. It could shrink to the size of a needle and be kept inside his ear, or even as small as a grain of rice. The staff could also be expanded to be as high as Heaven.

It was originally a stick for measuring sea water depth by Dà-Yu in his flood control efforts – hence its ability to vary its shape and length. After Da-Yu left, it remained in the sea and became the “Pillar holding down the sea”, an unmovable treasure of the under-sea palace of the Donghai Lòngwáng (“Eastern-sea dragon-king”), Aoguang.

Wukong swindled it from Aoguang, who underestimated Wukong and bet him he couldn’t pick it up. It weighed 13,500 jin (6,750 kilograms). Furthermore the Pillar was said to be able to multiply, transform, and act intelligently, though it never actually displayed any of these traits.

Wukong also forced Ao Guang to give him other magical gifts, including golden chain mail, a phoenix-feather cap, and cloud-walking boots.

Hoping that a promotion and a title would make him more manageable, the Jade Emperor invited Wukong to the Heavenly Kingdom. However, this did not work out as hoped. After the Jade Emperor excluded him from a royal banquet, a rebellious Wukong ate empress Xi Wangmu’s “Peaches of Immortality” and Lao Tzu’s “Pills of Longevity”.

The monkey later felt guilty about this, but only slightly so, and continued to be a nuisance to everybody in the Jade Emperor’s palace. Finally, the heavenly authorities had no choice but to attempt to subdue him.

He defeated the Army of Heaven’s 100,000 soldiers, then the Four Heavenly Kings, Erlang Shen, and Nezha. Eventually, through the efforts and teamwork of the Heavenly forces, including the contributions of many famous deities, Wukong was captured.

After several execution attempts failed, Wukong was stuffed into Lord Lao Zi’s eight-way trigram cauldron to be distilled into an elixir by the cauldron’s sacred flames, which were thought to be hot enough to consume him.

However, after cooking for 49 days, the cauldron exploded and Wukong jumped out, stronger than ever. He now had the ability to recognize evil in any form through his huoyan-jinjing, or “fiery-gaze golden-eyes”.

If you meet the Buddha…

With all their other options exhausted, the Jade Emperor and the authorities of Heaven finally appealed to the Buddha himself, who arrived in an instant from his temple in the West. The Buddha bet Wukong that he could not jump out of his palm. Wukong, knowing that he could cover 108,000 li in one leap, smugly agreed.

The monkey took a great leap and landed in what seemed to be a desolate section of Heaven. Nothing was visible except 5 pillars, and Wukong surmised that he had reached the ends of Heaven. To prove he’d been there, he wrote “The Great Sage, Equal of Heaven, was here” on the middle pillar, and marked the space between the first and second with his urine.

Afterwards, he leaped back and landed in Buddha’s palm. Smiling, Buddha asked him to turn around. Wukong did, and saw that the five “pillars” he had jumped to before were actually the five fingers of the Buddha’s hand. Wukong had lost the bet.

Immediately, he tried to escape, but Buddha turned over his palm and dropped a mountain on Wukong. There Wukong remained imprisoned for 5 centuries until he offered to serve Xuanzang, the Tang Priest, who was destined to make the journey to the West to retrieve the Buddhist scriptures for Tang.

Journey to the West

The bodhisattva Guanyin helped the priest by giving him a magical headband which he tricked Wukong into wearing. With a special chant, Xuanzang was able to tighten the band and cause Wukong unbearable pain, which he would do whenever Wukong disobeyed or displeased him. Under Xuanzang’s supervision, Wukong was allowed to journey to the West.

WuKong is often described as having sunken cheeks and a pointed mouth, with black hair and blazing gold eyes. He wears various outfits throughout the course of his career, as they are only clothes, but always carries his cudgel into battle.

The armor he acquired from Ao Gang does not appear to come into play again after his imprisonment.

Originally, WuKong was a relatively normal, if slightly bold monkey. After becoming the Monkey King, he became somewhat dedicated to making certain his people and children would never be subject to death, a task he achieved during his revolt against Heaven.

After becoming Immortal, he became quite the braggart and quite violent, preferring to kill even if it wasn’t really needed. His journey with the Tang Priest XuanZang tempered this considerably, however.

“You insolent demon, how blind you are ! You may think I’m small, but I can grow easily enough. You may think I’m unarmed, but I could pull the moon down from the sky with my two hands. Don’t worry, old Sun WuKong will sock you one !”

“You hairy gods, what magic powers do you have to let you talk so big ? Clear off, or I’ll give you a taste of my cudgel !”

China in the DC universe, as with most comics universes, is quite sparsely populated.

The Monkey King might be still sitting under a mountain, waiting for a sage to free him. A sage… Vic Sage, while travelling in search of a teacher, encountered the Monkey King. However, as he was not a pure Buddhist, he could not remove the gold seal from the top of the mountain, and so left WuKong there. Heheheh…

On the other hand, a Monkey king let loose in the DC Universe without the calming influence of XuanZang could cause about as much havoc as he did back in Heaven… until the Justice League comes a-calling…

The China of Journey To The West is one quite different from the one that actually existed. For one thing, it is much, much larger than it ever was – for example, it is sixty thousand miles from Tang, the capital, to India, where the Scriptures XuanZang sought lay.

For another, it was filled with animals that became demons or immortals, every stream or river had a dragon, and gods walked the Earth. Even the Tang Emperor rose from the dead three days after he died.

Immortality is relatively easy to come by but appears to have varying levels (God, Immortal, Buddha, etcetera), and even non-immortals can live for two or three centuries. Most mystic beings not specifically barred from doing so also appear to be able to travel to Heaven virtually at will – at a guess, Heaven has a travel distance of no more than 2 or so.

Source of Character: Journey to the West. 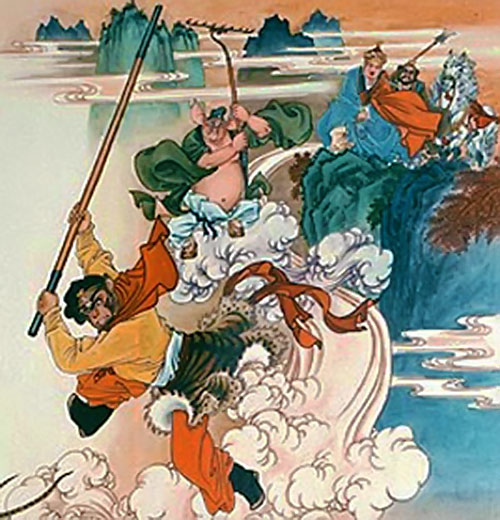 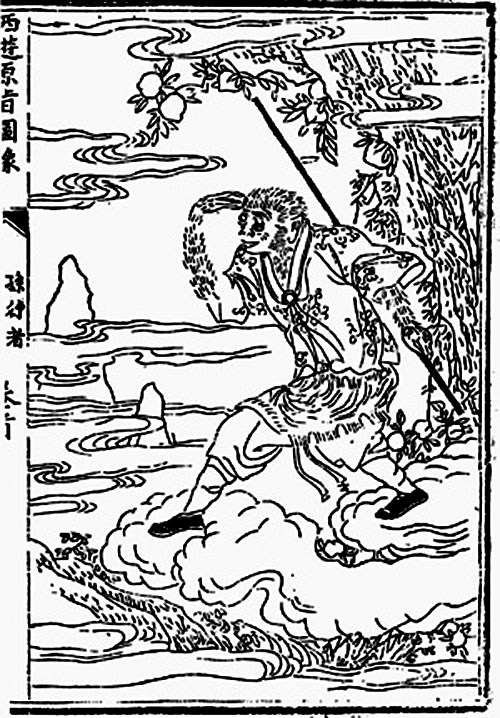