It only appeared in the Captain America 65th Anniversary special, though.

It also has a strange history, and has been around for centuries. So that’s useful.

It is well-armoured, and can presumably ignore ballista fire.

It can hit stuff with its pincer “hands”, or emit devastating green eyebeams.

The construct has some form of AI. It can understand spoken orders, presumably both in modern Latverian and in Early New High German  .

It has a biological-looking “heart”, vigorously pumpin’ a highly energised liquid to make the robot move.

The part holding the heart is less heavily armoured. If it is breached, an enormous explosion will soon ensue. 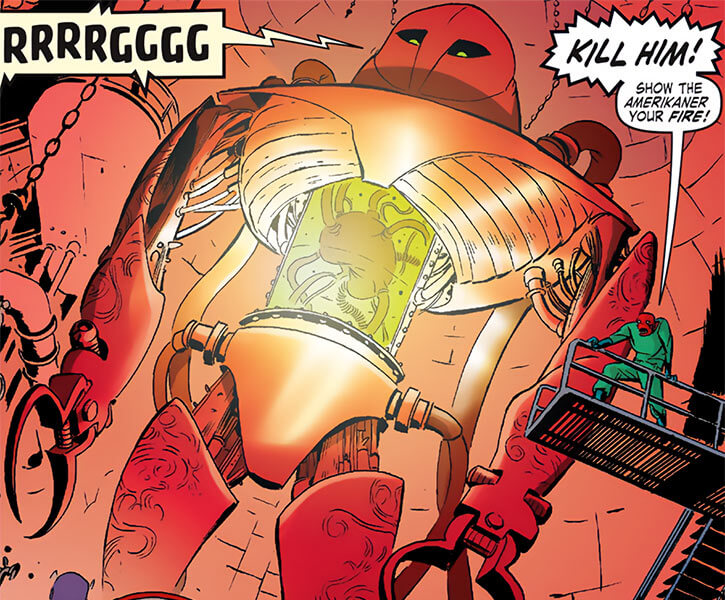 At some point in the future, Dr. Victor von Doom will be marooned in Southern Germany during the 1400s. As the “Iron Baron” (Eisenbaron) he, hmm, will have reigned over a small autonomous area for years.

The reign of the Eisenbaron is an obscure enigma in Bavarian history. However, during the 1930s, one of the locals — from the village of Eisendorf — became a historian. Herr Doktor Herman Dexx found significant, mostly abandoned municipal archives covering this era.

Von Doom had recreated a fair bit of technology. Since he lacked an industrial base, he drew inspiration from Leonardo da Vinci – especially for flying machines. He also built farming machines to make the area prosperous.

Dexx taught himself Latverian to read some of the notes. He even experimented with recreating the simpler machines. To his surprise, they worked fine.

Obviously, Germany had other priorities during the 1930s and 1940s. But in early 1944, the Red Skull (Johann Shmidt) took notice. He forced Dexx to collaborate.

Shmidt was researching any means to defeat the Allies – no matter how peculiar.

He noticed that, in the archives Dexx had found, the Eisenbaron had built a “monster-god of iron and fire” to defend his fief. The Skull correctly estimated that this mechaSome form of cool sci-fi super-vehicle or super-robot could be found and reactivated.

However, Eisendorf has some anti-Nazi partisans. Though only two were left, Richard and Gretchen Zeller warned British military intelligence about the SS unearthing the castle’s basement.

She wants the young American

After gathering intel and freeing Dr. Dexx, Cap had a rough idea of what the Skull was doing, and of how to defeat the “Monster God of Iron and Fire”.

When the mecha’s heart was breached, the explosion destroyed the ruins of the Castle. The Skull and Cap only narrowly escaped. 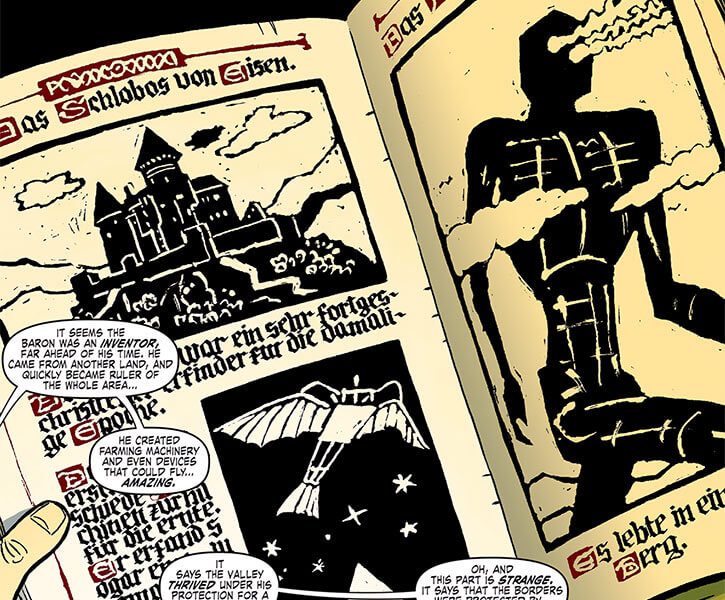 It is possible that the Eisendorf technology was reused by the Third Reich. Particularly when it comes to the Sleeper series of vengeance robots.

Postulating such a connection is mostly interesting to sustain the suspension of disbelief when it comes to comic-book Nazi super-tech. That and :

Growth is Always On and already Factored In.

Hitting the heart in melee isn’t a trick shot for a human-sized person, due to its size. But it requires either 1+ APs of Jumping, or a 8/8 Acrobatics (Athletics) roll.

Stats are minimalistic since a/ we see little of it, and b/ Cap has such a high AV/OV. Feel free to modify stuff, for we saw little of this robot. Alas.