Monsteroso is an early Marvel Comics character. He appeared in 1961, in Amazing Adventures. By cover date, that’s three months after Fantastic Four Vol. 1 #1.

This story was still very much in the mould of 1950s Atlas Comics stories. With a rampaging giant monster, flying saucers and a twist ending.

BUT LITTLE DID MANKIND SUSPECT THAT MONSTEROSO WOULD RETURN !

Monsteroso is huge, but his size isn’t consistent from panel to panel.

His enormous strength allows him to hold an elephant in his palm, or quickly dig through solid rock.

Monsteroso entirely ignored small arms fire. But chemicals, such as tear gas and sedatives, could clearly affect him.

When hurt, Monsteroso can enter a deathlike trance. One imagines that it facilitates healing. But perhaps it was to adapt to Earth’s atmosphere, gravity, or somesuch ? 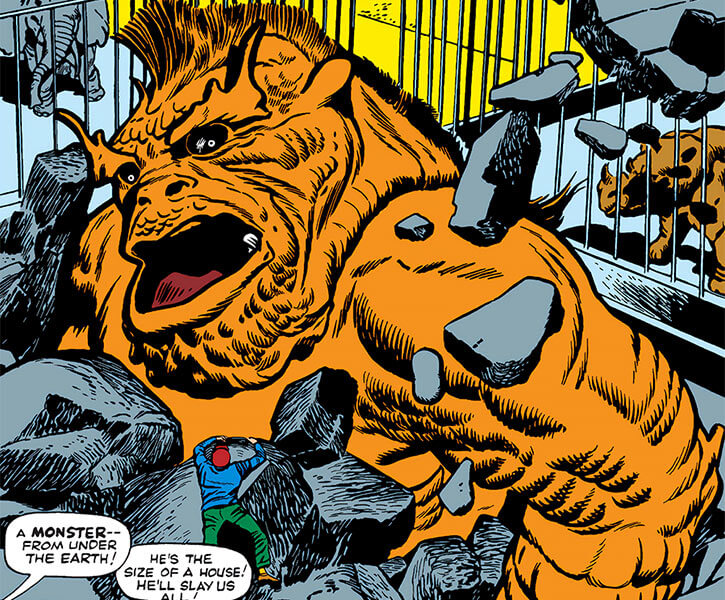 That bit was already done on FF #1’s cover, kid.

In 1961, the Kawa jungle tribe — living in an unspecified African area — witnessed the crash of a large spaceship.

They sensibly left it alone. But one Phil, an American circus owner, came looking for an exhibit.

He found the seemingly dead Monsteroso. Phil paid the locals to help him ship the apparent corpse back to New York City.

The AMNH  bought the spectacular find. But soon, the gargantuan alien awoke.

The alien left the Museum, but came under police fire. He lost the NYPD for a time by diving into the Central Park Lake, then digging underground.

Monsteroso reemerged in the Central Park Zoo. There, he examined large animals until the police came in.

The NYPD resorted to tear gas. Fleeing from the toxic clouds, Monsteroso climbed atop the UN Building.

The US Army quickly assembled a powerful harpoon gun, shooting a projectile loaded with litres of potent sedatives. A military Choctaw helicopter got close enough to deliver it. Tranquilised, Monsteroso fell into the East River.

At this point, a colossal flying saucer reached Earth. It then flew to Monsteroso, and two aliens — about thrice Monsteroso’s size — disembarked.

They explained that they were Monsteroso’s parents. Their toddler had accidentally ejected while in a lifeboat, and landed on Earth.

Since Humans hadn’t actually managed to hurt the infant, the parents left without retortion. Onlookers were left reflecting how lucky they had been *not* to kill the alien. 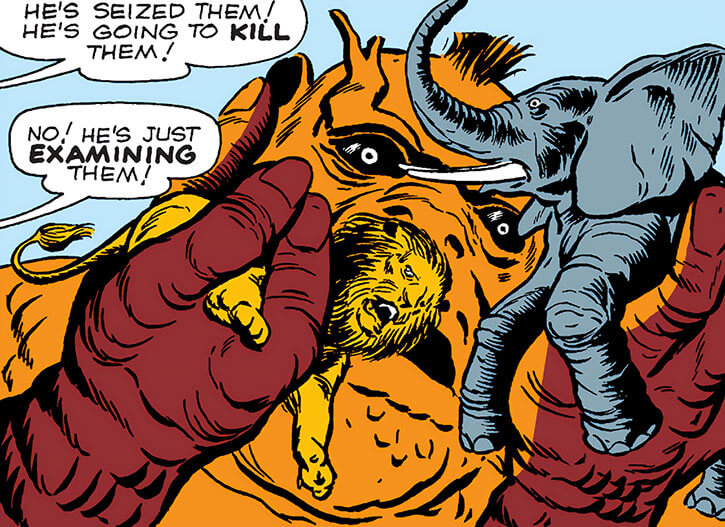 In 2017, Monsteroso was unexpectedly found in a space prison.

His appearance had changed a bit, and he now seemed to be perhaps 4 or 5 in Human terms. Presumably, his species takes decades to mature.

Said prison was a secret Inhuman one. A sort of max-security oubliette to get rid of extremely dangerous prisoners, forever.

Apparently, it was the prison’s warden who had paid the robotic “freelance peacekeeping agent” Death’s Head to kidnap the child. Since the prison’s staff called the alien “Monsteroso”, their data presumably came from Human records of the 1961 incident.

Considering that the warden fed off power and death, it seems likely that Monsteroso’s species has strong super-powers. The child may thus have been intended to serve as a power source for centuries to come.

Thankfully, Monsteroso was soon freed. A gang of powerful inmates had been organising a jailbreak.

There was a moment of confusion. The would-be escapees briefly thought that Monsteroso was the warden, who they had never seen. But telepathic gang member Blinky realised the mistake before Monsteroso could be hurt.

Once the warden and the prison had been destroyed, escapees Blinky and Black Bolt (Blackagar Boltagon) loaded Monsteroso into a spaceship. They then delivered the kid back to his relieved parents.

In 1961 Monsteroso was wearing briefs because, well, comic book giant monsters wear briefs. It is known.

But in 2017 these are drawn more like diapers, making them less incongruous.

In 2017, both the child and his parents looked different. Admittedly, the 1961 designs were really dated. Perhaps they have long physiological cycles altering their appearance.

In 1961, he was just a toddler and couldn’t even speak. He had a low attention span and was scared.

He also liked looking at lions and elephants, so I guess some things are universal. Come on, lions are just cool.

In 2017 he seemed about 4. He was scared, tired, disoriented, and fearful of being hit. He had been told that he was to be punished, and didn’t understand why. 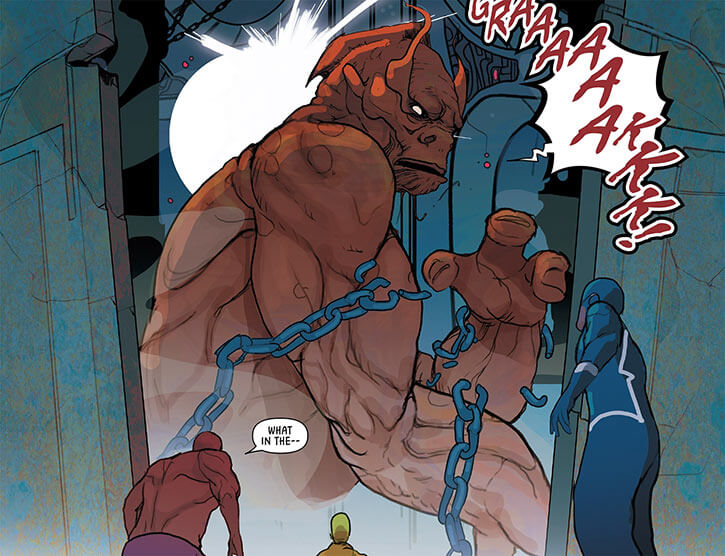 The kids are alright

For the 2017 appearance, adding 2 APs of Growth should be about right.

Monsteroso — who noted that, obviously, “Monsteroso” wasn’t his actual name — was still too young to have higher Mentals and Mysticals.

The deathlike trance is simply written up as Suspension, since we don’t know what it does.

He likely only speaks his parents’ language(s). In 2017, communication was done via Blinky’s telepathy.