Monstro has a high level of superhuman strength and toughness – perhaps “Class 65”. He once managed to punch out the Dragon Man, but by his immediate admission that wasn’t significant. The creature was just recovering from getting knocked out by super-heroes, and was obviously weakened.

Johnson is a good climber (presumably from NYFD training), and is strong enough to drive his feet and fingers through brick or cement to climb a building. His super-strength also allows him to make superhuman jumps.

He doesn’t really know how to fight. However, his strength give him considerable speed and momentum. Thus he’s actually an effective, if technically mediocre, brawler.

The man who would become Monstro spent most of his life as an ordinary worker somewhere in the Midwest. At one point, he was employed at a cardboard manufacturing plant.

At age 33, he gained his powers under unrevealed circumstances. Unable to control his newfound strength, he accidentally collapsed his own home when he bumped into a wall. This killed his wife and daughter. In shock, he was unable to explain himself to an hostile police. Thus, the man had to flee in order not to get arrested.

He eventually reached New York City. Guilt-ridden over the death of his family, he wanted to atone by saving other people. The man joined the New York City Fire Department  as “Frank Johnson”. It was apparently there that he gained the ’Monstro’ nickname.

He proved to be an excellent fireman. And his superhuman abilities were invaluable in saving lives in tough circumstances.

His fellow firemen never told anyone that ’Johnson’ was superhuman. Still, his daring rescues started attracting too much attention. Monstro had to leave the department. The last straw was appearing on television when he spectacularly saved a suicidal man from a blaze.

Monstro next found employment with Damage Control. There, he could have an even lower profile and still work as a rescue worker. While with D.C. he befriended the new Ant-Man (Eric O’Grady). O’Grady was at that point using both a fake ’super-hero’ codename (as the “Slaying Mantis”) and a fake identity.

Mistakenly thinking O’Grady to be a hero, Monstro became his friend. O’Grady used his street contacts to have an excellent fake ID set made. This document allowed Monstro to register with the government as a licensed superhuman under a fictional name.

In 2008, the Hulk attacked New York City after returning to Earth. Monstro decided to stay and try and stop the jade giant. But he didn’t even get close to the Hulk. When Iron Man engaged the Hulk and got knocked back by an unimaginably powerful punch, Monstro was in the building Iron Man hit. He was buried under many tons of rubble.

He made it out alive, but in no condition to stay and fight.

Monstro hasn’t been seen since.

A simple, honest Midwest guy thrown into a terrible situation and trying to atone. While he’s gruff, he wears his heart on his sleeve. He really misses his old life – his wife, his seven-year old daughter and his friends, as well as other aspects of a normal life. He tends to be trusting, and is genuinely heroic even when faced with grave danger.

Monstro often gets the blues. He tends to drink too much whiskey and stare at an old family photo when this occurs. He seems to be a quiet and maudlin drunk, though. He would never drink if he were a bellicose drunk. He’s generally pensive and wants a simple life. For instance he doesn’t have a TV and much prefers reading.

He seems in fact fairly well-read, though his level of formal education is unclear. While at the NYFD the other firemen joked about him often having answers and detailed points to make in conversation, since he had read on the subject. This character trait was also judged annoying by some.

As part of his guilt, Monstro is self-deprecating. He will occasionally comment about how homely he is, say that he doesn’t know how to fight and is not a real hero, point out that he won a fight mostly thanks to the effort of other people, etc.. He becomes jittery whenever he’s in the spotlight, and will flee the media.

Yet if he has to make a choice between avoiding the limelight and rescuing people, he will always go for the rescue.

“Humor me, John. Tell me a good story. Guy like me — look at me — closest thing I’m going to have to a family is hearing your stories [about your family].”

“I’m on the run — I want to do good, I want to help people. But when things get too hot, I’ve got to bail. I can’t have people knowing my identity.” 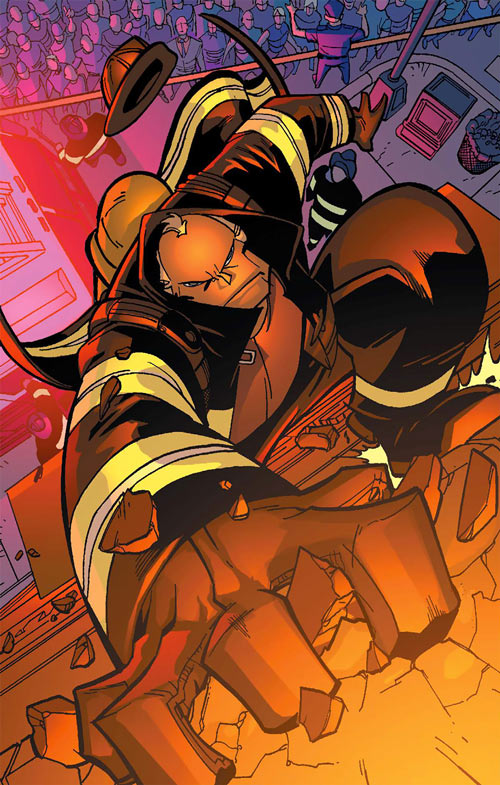