The Monstroid is a Skrull military robot – apparently a scout. It :

Ballox 7NH54 was a scout robot kept aboard a Skrull spaceship. In 1972, it crashed on the Long Island northern shore. The ship was presumably shot down during the Kree-Skrull war, which took place within Earth’s solar system.

The ship’s crash was witnessed by the Puppet Master, who was living in seclusion in a coastal cottage. Seizing the opportunity, the Master entered the ship, found the robot and made a special puppet to control it. After the robot gave its identification, the Master sensibly renamed it “Monstroid”.

The Master’s goal was of course to strike at the Fantastic Four. But he first took it for a “test drive” in New York City, robbing a jewellery shop then dispersing the cops. Satisfied, he had Ballox fly him to the roof of the Baxter Building and destroy the defences there. The pair then laid in ambush.

My Vision is impaired

But Ballox was operating on the exact same brain frequency as the Vision. This triggered terrible pain in the android.

One suspects that Skrulls did so on purpose after witnessing the terrible destruction brought by the Vision during the Kree-Skrull war. Maybe they wanted one of their scout robots to neutralize the Vision. Or maybe they wanted Ballox to think more like the Vision to make it more fearsome.

The ailing Vision stumbled on Spider-Man (Peter Parker), who traced the interference to the Baxter Building.

The Monstroid engaged the Vision and Spider-Man. But the Vision went immaterial and collapsed so the alien robot tried to kill Spider-Man. This allowed the Vision to stagger to the Puppet Master and swat the puppet from his hands. The robot went inert.

The princess is in another apple

The Monstroid was then moved to a S.H.I.E.L.D. base for safekeeping. But the sorcerer Master Khan decided to use it to kill one Princess Azir while she was visiting New York City. Khan paid a guard to obtain inside intelligence. Then his men came in, flooded the compromised base with nerve gas, and absconded with the Monstroid.

The robot attacked the princess in Central Park, while she was watching a softball game between Marvel Comics staffers and the NYPD in Central Park. Iron Fist (Daniel Rand-K’ai) was there, having been invited by Det. Scarfe and Chris Claremont.

The robot attacked, killing several cops and the princess’ bodyguards. Iron Fist couldn’t quite damage the robot, but took out both exposed optical sensors. With the Monstroid blinded, Rand could focus. He thus could smash the robot’s head with the iron fist, saving the princess.

He’s an alien robot. Pretty much everything’s in the quotes.

Advantages:
Misc. – the Monstroid operates on the same brain frequencies as the Vision, rendering the synthezoid helpless as long as he is activated. The Vision must roll his WIL/MIN against an OV/RV of 08/10 and gain RAPs to act in any given Phase. All of the Vision’s AVs and OVs are lowered by 6 APs, minus any RAPs gained in the previous roll for that Phase.

Drawbacks:
MPR (the optical sensors have but BODY: 01 and Skin armour: 06. If they are destroyed the Monstroid will need a Phase to switch to Thermal vision backup sensors). 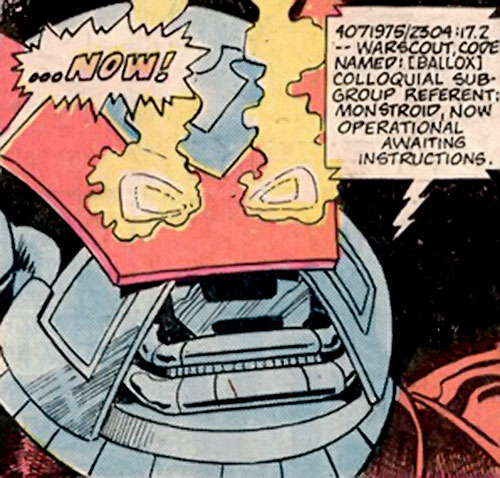 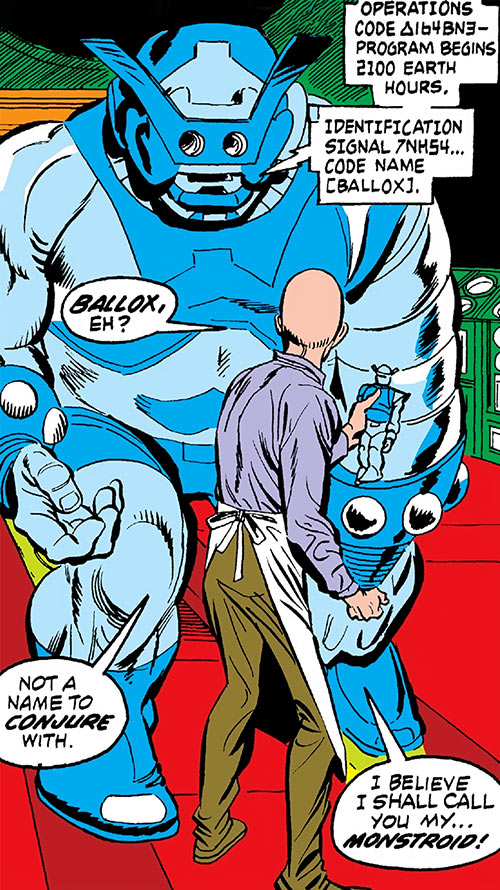 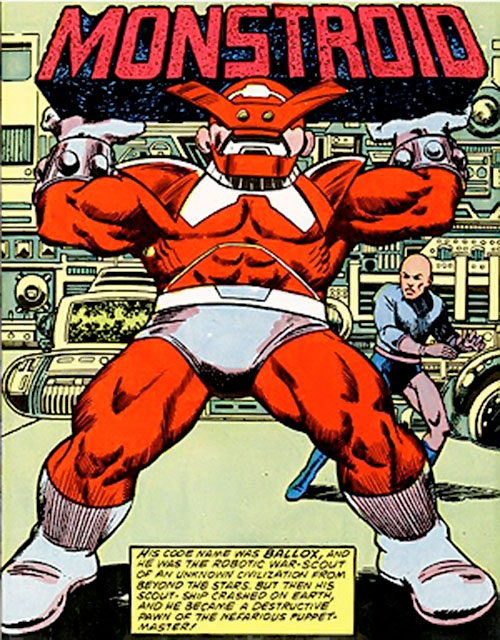