And he continues the tradition of Wildstorm teams supposedly made of outmatched humans actually having a super-strong fighter among their ranks.

Shaw is a skilled medical researcher for the FBI. It is likely that his fields include forensics and toxicology.

It was strongly implied that he was competent in exotic biology (post-human and seedling  physiology, alien physiology, superpowers research, etc.).

Like his Monstrosity form he has two extra arms growing from his torso. Though fully manipulative they are tiny and even feebler than his main arms.

The Monstrosity is a huge Daemonite/Human hybrid. It mostly looks like a giant Daemonite with extra arms looking much like Shaw’s, but much bigger and more powerful.

The Monstrosity devastatingly strong and durable, and incredibly violent and aggressive.

However, he developed an incredible condition during his adolescence. When he became agitated, he would transform into a monstrous, rampaging creature. It is unclear whether he always had his two tiny, extra arms, though, or if he developed them as the Monstrosity emerged.

This colossal, ultraviolent brute, with a personality dissociated from Shaw’s, was dubbed the Monstrosity. One can imagine the Monstrosity had a Hulk-like career, though perhaps with a lower profile. Most people could recognise Shaw’s name, but not his face.

Some years back, Dr. Shaw was kidnapped by two of the Daemonite nobility on Earth – Lord Defile and his Lady Decadence. The terrifying aliens had determined that Shaw was actually one of them – but Shaw was not an ordinary Daemonite. He was a crossbreed, the product of an experimental program conducted decades ago.

At first, things went well. The nobles fast-talked and flattered Shaw about his brilliance. And the researcher was fascinated by discovering his alien heritage, not knowing anything about Daemonites.

However, the aliens used and violated Shaw. They turned him into a version of the Monstrosity that was far worse and far more powerful than before. Eventually, they abandoned him to cover their retreat when Fuji and Diva of StormWatch discovered the lab.

The Monstrosity’s clash against the two heroes was titanic. It resulted in tremendous collateral damage and loss of lives.

StormWatch personnel eventually managed to cure him. They were confident that he would not turn into the Monstrosity again. 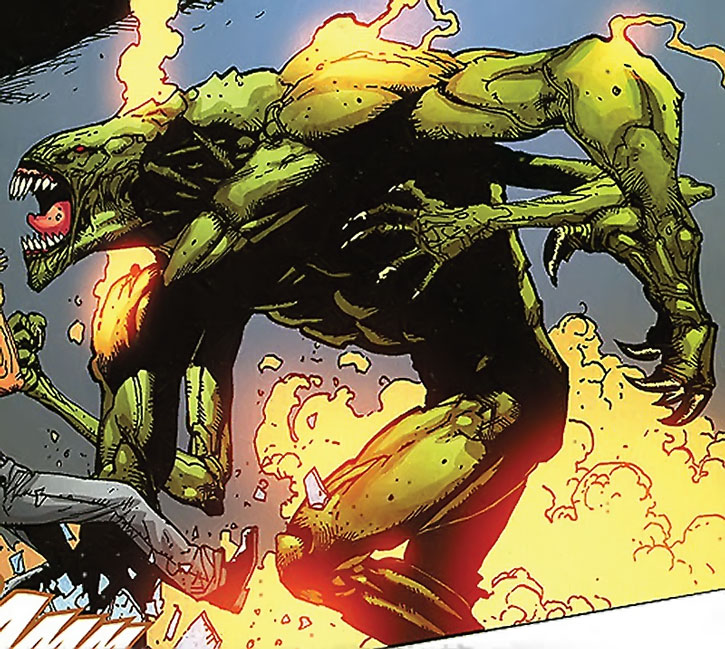 Shaw, recovered, returned to his FBI work. But though he seemed meek and under control, Shaw actually craved vengeance against the Daemonites nobles.

The scientist was approached by Jackson King whilst King was assembling the experimental StormWatch PHD unit. Shaw was recruited for his hatred of Daemonites, biological expertise and knowledge of Daemonite physiology. In particular, the Daemonite pheromone sensor he had been working on could be an incredible asset in uncovering Daemonite infiltrators.

Hait to the pee, to the aich, to the dee

However, it broke bad. While working on a seemingly abandoned Daemonite base and six suspected Daemonite infiltrator in Nevada, Shaw was found by Lady Decadence. Before other PHD operatives could intervene, the local scientists working with Shaw were slaughtered. Decadence almost managed to have Shaw manifest the Monstrosity.

Although Shaw resisted, the other Daemonites were satisfied. They knew the next attempt would be successful.

Defile, Decadence and several Daemonite and post-human allies next struck PHD in the very precinct house they were sharing with NYPD personnel. They forced Shaw to become the Monstrosity, by promising to the creature it would get Gorgeous, an attractive PHD operative.

Don’t mess with the hotness

A mistress of psychology and manipulation, Gorgeous easily wrapped the Monstrosity around her finger. She promised it she would have sex with it if it turned against Defile, convincing the creature that it would be much more enjoyable than just raping her.

This was the turning point when, incredibly, the PHD agents and the precinct’s cops turned the tables against the invaders. In the fray, Defile managed to “turn off” the Monstrosity and revert it to Shaw through hypnotic command. Nevertheless, the PHD unit defeated all assailants and force Defile and Decadence to flee before StormWatch Prime could reach them.

Is he man or is he monster ?

Some time later, when Slaughterhouse Smith collapsed a building on the team, Shaw turned into the Monstrosity in the nick of time. He held the rubble, preventing them from crushing Gorgeous and the other team members. 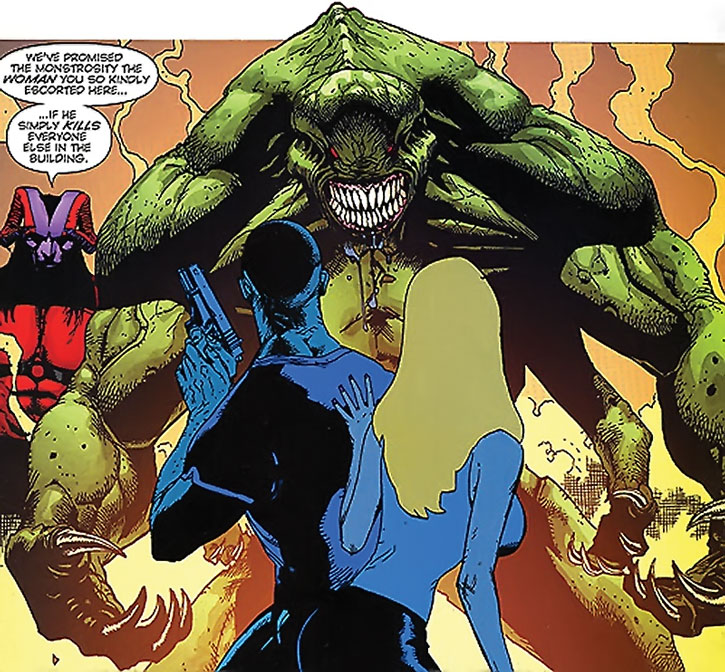 To the amazement of the others, it communicated almost normally. The Monstrosity told them it loved Gorgeous and to do anything necessary to save her, holding up the debris and staying behind to let the other get out and evacuate the unconscious Gorgeous. The building eventually collapsed, but the Monstrosity easily survived.

Officer Doran then asked the Monstrosity to turn back into Shaw to accompany them to the hospital. Amazingly it did so, mantaining a continuous stream of awareness between its alien form and his human form.

After this incident Shaw started facing his psychological drivers. He had always avoided doing this for fear of turning into the Monstrosity.

When his colleague Dino crudely warned him that Gorgeous was a dangerous person to date, Shaw very uncharacteristically punched him in the face. Even more amazingly did not become the Monstrosity despite the outburst.

His team mates, including Dino, were favourably impressed by the assertive answer and his newfound control over his other half. By the next mission (the last published PHD case), Shaw could easily turn into the Monstrosity and seemed entirely under control, serving as the resident brick .

Shaw’s extra hands/arms are usually nervously wringing their hands or fiddling with his tie. Or covering his genitalia after he emerges naked from a transformation into the Monstrosity.

Dr. Shaw was very mild-mannered, quiet and dull. But it was obvious that the ageing doctor was seething with frustration and dreamed about killing anybody annoying him, having sex with all attractive women he saw, and generally lashing out. Howbeit, this may have been the unconscious pressure of the Monstrosity inside his psyche rather than an actual personality trait of his.

He always took great care to remain calm. Shaw usually worked with easy-listening music on to soothe him. The music was loud enough to make sure he would not overhear something making his frustration flare up. he was careful to never do anything exciting.

The doc stayed in his lab as much as possible, seldom mingling with the rest of the team. He took a lot of mood stabilisers and the like.

Shaw received extensive counselling to recover from the trauma and behave a nice, affable man in a lab coat. But his inner tension and feelings of violation since the initial Monstrosity episode were difficult to bear.

Thus, the offer he accepted from Jackson King was to *avenge* himself from Defile and Decadence. Something that would seem very much out of character to those who only knew him as a sweet and quiet researcher.

The Monstrosity was an immature, rampaging brute. He was utterly unable to deal with frustration and wanted everything *now*, and to kill anybody annoying it. Still, it always obeyed Defile’s orders – possibly as a genetic conditioning as a lower class Daemonite. The Monstrosity came across as an incredibly violent and frustrated 12-year old boy.

“Oh, no, not at all. Those days are long gone. Your own StormWatch techs pronounced me completely cured. Completely.”

“It’s immaterial. No different than having a murderer for a father. Your life is what you make of it, not what you’re born to. I’m a doctor, a researcher. What they did doesn’t… what… they… did…DON’T ! Don’t say that ridiculous name. I am not that… thing !”

“The Monstrosity is me, Dino. The parts of me I don’t like to admit exist. It’s probably time I faced up to that.”

(Salivating about raping Gorgeous) “I don’t care if *you* think it’s fun ! I’m sick of girls like you looking at me like you’re gonna puke. And Shaw’s too wussy to do anything about it. But now I’m in charge and I’m gonna enjoy it !”

Bonuses and Limitations:
Extra limb does not provide Wrestling/Grappling bonuses.

Bonuses and Limitations:
OV/RV are both raised by two CSes for use of Detective (Clue Analysis) and Scientist in applications not firmly in the field of biology and medical research (one CS for borderline cases).

Drawbacks:
Age (Old), Guilt, SIF of becoming the Monstrosity (which of course *triggers* the change if it fires).

Equipment:
Shaw was working on equipment that could Detect Daemonites, built by the Machinist from his plans. It is likely this technology was actually prototyped, though its APs and Range are unrevealed.

Shaw went through considerable growth near the end of the PHD run, after he had sex with Gorgeous. This experience solved many of his psychological issues – like many men, he thought he wasn’t a full person until he’d had sex with a woman other men lusted after.

He lost the Guilt and the SIF. He also became gradually able to maintain a continuity of consciousness while in his Monstrosity form – which no longer had its own agenda. He could talk intelligently even in Monstrosity form, and gradually became able to change at will. His personality as Shaw also changed.

Thus, the Mental and Spiritual Attributes of both Shaw and the Monstrosity started matching each other, using in each case the higher value among the two forms, through Character Advancement.

Also through Character Advancement, Shaw started losing Age (Old) and his Guilt. He also gained some of the physical and mental vitality of his alter-ego. Meanwhile the Monstrosity form started developing Shaw’s Skills and lowering the Rage and the IA. Furthermore, both forms’ Alter Ego started becoming voluntary.

Character Advancement is a slow process, especially since many people use rates slower than the rulesbook’s to emulate comic books. But both Shaw and the Monstrosity actually had a bunch of Hero Points they could not access due to their psychological limitations. They used these for the Advancement outlined above as they gradually became available.

Most of the Advancement has thus been done by the time of the last issue of StormWatch:PHD. Howbeit, it is hard to suggest precise values since Shaw and the Monstrosity were only seen briefly after they started merging.

I have assumed that the Monstrosity had more HPs during its initial appearance and fight against Fuji and Diva (which is only seen in a two-panels flashback). This is how those powerful-enemy-becomes-an-ally things usually go.

I have also assumed it has the same regenerative abilities most Daemonites do (though at a lesser level), including a very long lifespan, and could survive the conditions of the planet Daemon. But those assumptions are just guesses and are not based on actually displayed abilities. 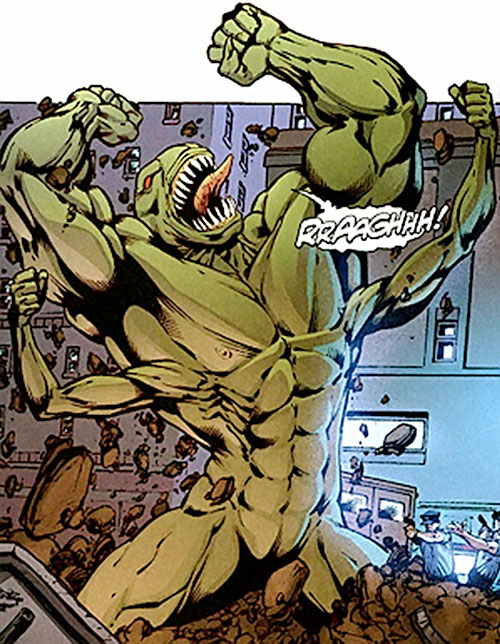